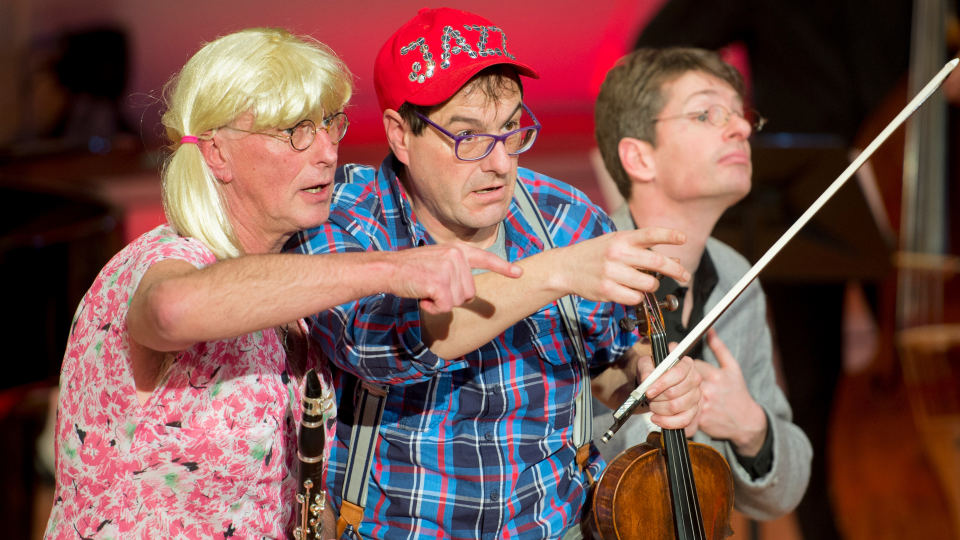 Like many children (and adults), Max loves music, but is not so keen on practising. But you can’t play without practising – especially now that Max and his sister are to appear at a major summer concert at the Waldbühne. On the way home from his strict Italian music teacher, Max hears unusual sounds coming from a circus wagon – music that is weird and wonderful at the same time: for the first time in his life, the young viola student hears jazz music, and he wants to be able to play it, too. But how do you play it when there is not even sheet music? Fortunately, Max finds a magic weapon – a red cap which gives him magical musical powers. But will the audience at the school concert enjoy a piece by Mozart with improvisations and blue notes? This story, entitled The Jazz Cap, is told as part of a project of the Berliner Philharmoniker’s Education Programme.

Classical music and jazz have not lived in separate worlds for a long time now. Major composers such as Stravinsky and Ravel extensively borrowed from America’s perhaps most important contribution to the history of music. There are also some talented jazz players the ranks of the Berliner Philharmoniker – such as the violist Martin Stegner, clarinetist Manfred Preis, double bass player Esko Laine, and Raphael Haeger, whose day job is as a percussionist with the orchestra, but who demonstrates his brilliance here as a jazz pianist. Together with guitarist Helmut Nieberle who devised the story, they show Max’s journey to a new musical world. The audience is guided through the story by the friendly and humorous Juri Tetzlaff, who himself comes from a family of musicians and is best known to young audience members as a presenter on KIKA, Germany’s TV channel for children.