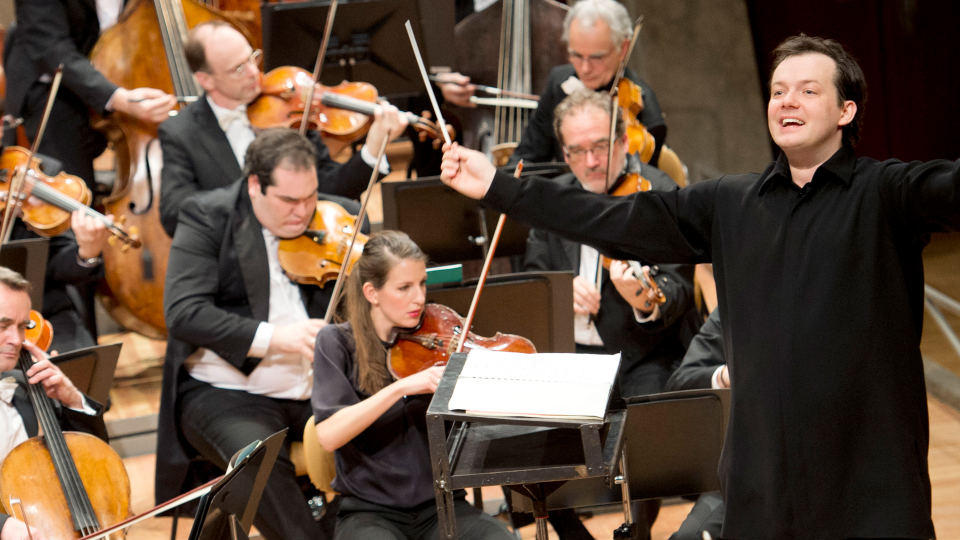 In his essay “On the Overture”, Richard Wagner strongly advised his composer colleagues against “wandering off to the wearisome painting of minor plot details”. Ultimately the composer would no longer be able to “carry out his dramatic idea” if details of the action were already revealed in the prelude. Accordingly, in his Tannhäuser prelude, Wagner limited himself to a chorale-like trombone choir (Wartburg), shimmering chromaticism (Venusberg) and a tremendous final apotheosis to suggest the story’s key points, beginning with “the orchestra alone imitating the chanting Pilgrims”.

To complement Wagner’s spatialised musical scene, Andris Nelsons turns to a work that Mozart composed in 1779 in Salzburg, the Symphony in B flat major, K 319. Described by Ludwig Finscher as an “extraordinarily subtle chamber symphony”, it was originally in three movements, the minuet being added later for a performance in Vienna. It was published along with the Haffner Symphony in 1785 by the Viennese firm of Artaria, and their popularity with the public has endured to the present day.

To conclude the concert, Nelsons conducts Shostakovich’s Sixth Symphony in which the composer, to quote Leopold Stokowski, proves himself to be “a master who was constantly growing in creative imagination and musical self-confidence”.

Works by Mozart, Wagner and Shostakovich

A transitional piece: Wolfgang Amadeus Mozart’s Symphony No. 33 in B flat major

The three symphonies that Mozart composed in Salzburg during 1779 and 1780 represent the fruits of his journey to Paris early in 1778. His sojourn on the Seine was hardly a personal success, but it did broaden his artistic experiences by acquainting him with Parisian musical life, with the famous concert series known as the Concert Spirituel as well the audiences in the French capital. The three symphonies written after his return to Salzburg have thus been characterised by the music historian Ludwig Finscher as “experiments in which the genre’s horizons were re-measured”.

The Symphony in B flat K. 319 originally had only three movements. Mozart added the Minuet in 1782 for one of his Vienna “academies”, making concessions to the expectations and tastes of the respective audiences: in Salzburg symphonies were preferred with three movements; in Vienna, with four. This “exceptional work among Mozart’s early symphonies” (Finscher) is, in a number of senses, a work of transition, exhibiting various features that signpost Mozart’s musical path from Paris to Salzburg and then on to Vienna, where he finally settled. In this work, he challenges his public and “presumes a certain level of understanding among his listeners, both amateurs and professional – the exact opposite of the audience for whom his ‘Paris’ Symphony was written” (Finscher). A new era for the symphony had begun.

Unusual and disturbing: the Overture to Richard Wagner’s opera Tannhäuser

The French poet Charles Baudelaire rhapsodised after the Paris premiere of Wagner’s Tannhäuser: “No musician excels as Wagner does in painting space and depth, both material and spiritual … One seems sometimes, when listening to this fiery and peremptory music, to recapture the dizzy perceptions of an opium dream.” Baudelaire got to the heart of the opera’s story and subject when he wrote: “Tannhäuser represents the struggle between the two principles that have chosen the human heart for their chief battlefield; in other words, the struggle between flesh and spirit, Heaven and Hell, Satan and God.”

The minnesinger Heinrich von Ofterdingen, known as Tannhäuser, has abandoned the social rigidity of Landgrave Hermann’s Thuringia for the enchanted realm of Venus, goddess of love. Soon surfeited with its sensual pleasures, he longs for a life of purity, embodied by the landgrave’s niece Elisabeth. Returning to the Wartburg, Tannhäuser participates there in the Song Contest, not least to win over Elisabeth. When he “relapses” and ecstatically praises Venus and the life of the senses, he turns the whole society against him and only Elisabeth’s intercession saves him from the threats of the assembled knights. Acknowledging the outrage, Tannhäuser agrees to do penance by joining the pilgrimage to Rome and seeking forgiveness from the Pope. That salvation, however, is granted him only after his return, following Elisabeth’s death and then his own.

The Tannhäuser Overture was unusual for its time, even disturbing. Wagner held that the composer “could no longer work out his dramatic subject” if the overture had already foreshadowed the action. Thus he presents here, not a potpourri of themes or motifs, but only two motifs, representing the two spheres of the drama: the trombone chorale symbolises the realm of the Wartburg, while sensuous chromaticism, tonal opulence and “tumultuous shouts and savage cries” stand for the “seductive enchantment of the Venusberg” (Wagner).

Shostakovich wrote his Sixth Symphony in 1939, a year of great historical upheaval. By this time, he was already an internationally recognised composer, and the Leningrad Conservatory, where he had been teaching since 1937, made him a full professor of composition. At the same time, he found himself in the midst of a profound crisis. The notorious article “Muddle Instead of Music”, published in the party newspaper Pravda in 1936, castigated Shostakovich for formalism, decadence and deviating from the dogma of socialist realism. His response, following a period of deep depression, was the Fifth Symphony. Contrary to all the affirmative interpretations, that work is anything but a contrite reversion to the supposed right path. Shostakovich’s apparent “optimism”, in the sense of official cultural ideology, was only superficial. As so often with Shostakovich, his true views and feelings are hidden behind a sometimes grandiloquent façade.

Coming after the relatively classical Fifth Symphony and before the lofty Seventh (“Leningrad”), Shostakovich’s Sixth Symphony occupies a unique position in his output, and its first performances in Leningrad and Moscow were the source of some mystification. His Russian biographer Ivan Martynov reports that Shostakovich “had been expected to write a symphony as full of action, development and dramatic unity as his Fifth. But he ‘thwarted’ his public by producing a work which, though highly finished, was cast in entirely different artistic terms. This was a disappointment to many and prevented them from forming an objective evaluation of the aesthetic qualities of Shostakovich’s new symphony and from understanding its true significance.” The Polish composer Krzysztof Meyer, a friend and biographer of Shostakovich, writes: “A number of critics regarded the new symphony as a ‘peculiar headless torso’ and wrote about contradictions in its conception as though they had forgotten that works of unconventional construction have appeared often in the history of music.” There were also positive evaluations of the Sixth Symphony, approbation that ensured its continuing performances.

What disturbed early listeners most about the symphony was its unusual formal structure. The proportions are indeed idiosyncratic, with an opening movement that lasts longer than the Allegro and finale combined. Though with suggestions of sonata and ternary ABA form, this monothematic introductory Largo basically consists of a series of variations. It develops from a unison theme on cor anglais (English horn), clarinet, bassoon, violas and cellos. Yet the theme itself, made up of three motifs in varying configurations, is never clearly defined. The customary drama of symphonic development is almost entirely replaced by variation of timbres and shapes.

The following Allegro, a scherzo in 3/8 time, displays Shostakovich’s typically grotesque sense of humour. Rich in musical contrasts, it explores extreme sonorities and dancelike rhythms. The tripartite Presto finale is not only related to the second movement but almost seems a continuation of it in the use of similar features, containing sonata form and rondo elements. Its main theme suggests the galop, a dance rhythm used by Shostakovich in many earlier compositions (usually with parodistic intentions). The middle section begins with heavy stamping on the basses. A long crescendo culminates in a tumultuous coda.

Even if Shostakovich’s Sixth must ultimately be considered one of his “smaller” symphonies, it is “effective, rewarding and masterfully written” (Krzysztof Meyer), one of the Russian composer’s most interesting symphonic experiments.

Andris Nelsons was born to a family of musicians in Riga. His career began as a trumpeter in the orchestra of the Latvian National Opera as well as the winner of many competitions for his singing (including the Latvian Grand Music Award for outstanding achievement in music). After completing his studies in Riga, he became a student of Alexander Titov in St. Petersburg; Mariss Jansons is his most important mentor. From 2003 to 2007 Andris Nelsons was music director of the Latvian National Opera, taking on the same role the year after with the City of Birmingham Symphony Orchestra. In 2009, he completed his tenure as principal conductor with the Nordwestdeutsche Philharmonie in Herford. Andris Nelsons regularly conducts performances at the Royal Opera House Covent Garden, the Metropolitan Opera New York, the Wiener Staatsoper and the Berlin Staatsoper. In summer 2012, he returned to the Bayreuth Festival in a production of Lohengrin, directed by Hans Neuenfels, which Nelson premiered in 2010. Andris Nelsons has already made appearances with such internationally renowned orchestras as the Vienna Philharmonic, Royal Concertgebouw Orchestra in Amsterdam, the Symphonieorchester des Bayerischen Rundfunks, the Staatskapelle Berlin, the Philharmonia Orchestra in London, the Tonhalle Orchestra Zurich, the Boston Symphony and the New York Philharmonic Orchestras. He first conducted the Berliner Philharmoniker in October 2010; his most recent appearance was in October 2012 in a programme of works by Britten, Debussy, Ravel and Widmann.

A coproduction of Berlin Phil Media and Unitel

Concert to commemorate the 25th anniversary of the Chernobyl nuclear disaster