A Beethoven evening with Bernard Haitink and Isabelle Faust 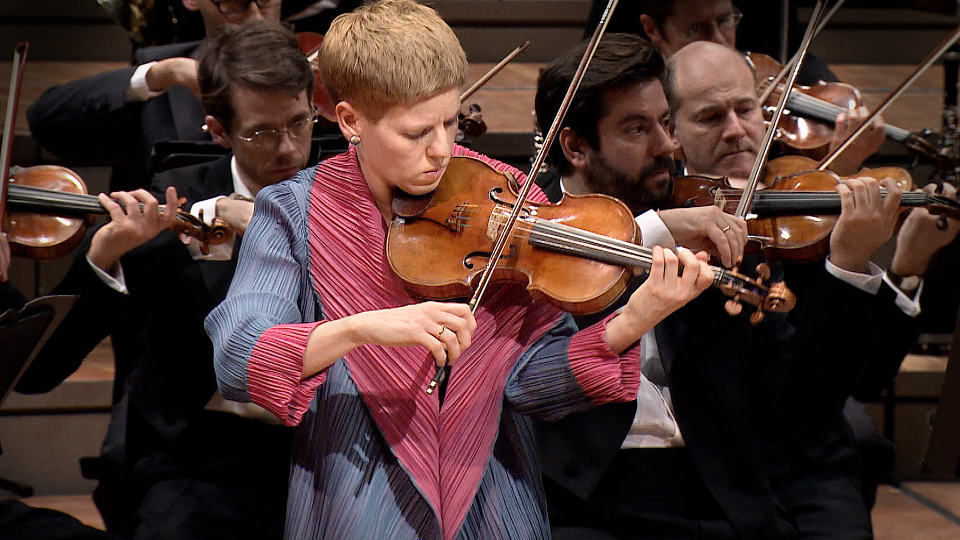 Isabelle Faust has been one of the world’s leading violinists for many years: “her sound has passion, grit and electricity,” the New York Times wrote, “but also a disarming warmth and sweetness that can unveil the music’s hidden strains of lyricism.” She doesn’t have to think twice when she answers the question what music her “Sleeping Beauty” Stradivarius from 1704 likes the most: “If I had to choose an ideal piece, it would be the Beethoven Violin Concerto. Music that is fleet of foot, radiantly shining, nothing that sounds too earthy. On its best days this violin has an unbelievable brightness, very silvery-golden. The very bright Beethoven sound also suits me very well: it is compatible with my nature and my emotions.”

As guest performer with the Berliner Philharmoniker conducted by Bernard Haitink, Isabelle Faust presents on her “Sleeping Beauty” (known as such because it was first forgotten in an attic for 150 years, and then disappeared again into a vault for a long time before being re-discovered) the “ideal piece”: Beethoven’s Violin Concerto. The programme continues with one of the most popular Beethoven symphonies, namely the Pastorale with its famous birdcalls in the second movement; the birds’ names can be found in the manuscript: nightingale (flute), quail (oboe) and cuckoo (clarinet). In purely musical terms this is a virtually freely performed cadenza for three solo instruments; for a short time, the symphony takes on the character of a concertante.

When one sets out in search of Ludwig van Beethoven in Vienna, the trail inevitably leads to the sixth district of Mariahilf. The composer moved into rooms inside the Theater an der Wien for a short time in 1803 in order to work on Leonore (later Fidelio), an opera he was composing for this theatre, which had opened two years earlier. In addition, several of his most important instrumental works were performed for the first time in the auditorium of the Empire style building during the first decade of the 19th century. Although the capital of the imperial-royal monarchy was already known for its rich musical life at that time, unlike most other European cities it had no public venue intended specifically for concerts, much less a concert hall, until the early 1830s.

Beethoven’s most spectacular yet bizarre concert at the Theater an der Wien took place on 22 December 1808. During a four-hour “academy” not only were his Fourth Piano Concerto and portions of the C major Mass, op. 86, heard; the artist, appearing as pianist and conductor, also presented the premieres of the Choral Fantasy, several smaller works and the Fifth and Sixth Symphonies. In addition to the dedicatee of the ‘Pastorale’ Symphony, Prince Lobkowitz, the composer and writer on music Johann Friedrich Reichardt was also in the audience. Three days later Reichardt described the extraordinary concert experience in a letter: “There we endured the bitterest cold from half-past six until half-past ten, and confirmed for ourselves that one may easily have too much of a good thing, and still more of a loud one. … You will be astonished at what was nevertheless presented by this prolific genius and untiring worker during these four hours.”

The circumstances surrounding the premiere of Beethoven’s Violin Concerto, which had taken place in the same hall two years earlier, also seem strange from today’s perspective. On 23 December 1806 Franz Clement, one of the best violinists of his day and conductor of the orchestra at the Theater an der Wien, presented a “musical academy reinforced by the orchestra”. In a mixed programme typical of that day, Clement, a friend of Beethoven’s, appeared in various capacities during the concert: as soloist in the violin concerto recently composed for him, as concertmaster in other works with orchestra – overtures, excerpts from operas and oratorios – and as a virtuoso in astonishing solo performances.

The prominent position of Beethoven’s Violin Concerto in the violin repertoire as one of the most important and powerful compositions ever written for this instrument is not as obvious as it may seem to us today. During the first decades after its premiere in Vienna the work was only performed by a few violinists. This situation did not change until the great Joseph Joachim championed the piece. The twelve-year-old violinist played the concerto for the first time in London in May of 1844, in a concert conducted by Felix Mendelssohn. A review in the journal The Musical World illustrates both the enthusiasm aroused by the brilliant interpretation of the violin prodigy and the reservations that were still expressed about the work at that time: “So well did he young Joachim play, that we forgot how entirely unadapted for display was the violin part.”

The symphonic demands and equal interplay between the solo instrument and orchestra are impressively revealed in the first movement of the Violin Concerto – here representative of the work as a whole. The central role of the orchestra already becomes clear during the lengthy orchestral introduction: all the relevant themes are presented in 88 bars. The starting point is a pulsing march motif that runs through the entire movement like a thread. It not only pervades all the instrumental sections but also alters its expressive character (at times relentlessly insistent, at times abruptly broken off or gently nudging, etc.) and function (principal thematic voice, accompaniment or transition figure).

The repetition of thematic material is an extremely important element of the first movement. In addition to the march motif, the lyrical second theme is also noteworthy. It is heard for the first time in the warm woodwind phrase following the initial fortissimo outburst of the full orchestra and a transitional figure in the unaccompanied first violins. Immediately afterwards the cantabile melody is taken up by the first and second violins – not in the form of a literal repetition, however, but as an expressive cantilena, transformed from serene major radiance into dramatic minor and underlaid with a propulsive chain of triplets in the violas and cellos. During the subsequent development of the movement each of the apparent repetitions also turns out to be a variant. The way in which the composer handles the interplay between orchestra and soloist is remarkable. For example, the second theme is reserved exclusively for the orchestra during the development section, and the treatment of the solo instrument in the second part of the exposition and recapitulation is also surprising. Instead of taking over the cantabile melody in its entirety and presenting it forcefully, the soloist acts as accompaniment above the orchestra most of the time; only the consequent (response) phrase of the theme is heard once in the upper register of the solo instrument.

This unconventional dramaturgy not only reflects the unusual allocation of roles in the opening movement of Beethoven’s Violin Concerto but also has a covert goal. In the coda following the cadenza the composer finally entrusts the second theme to the solo violin after all. In a passage of indescribable impact the soloist intones the final variant of the melody in soulful D- and G-string tones, accompanied by soft pizzicato chords in the strings.

Not a “painting” – Beethoven’s ‘Pastorale’

The fact that nature experiences were of immense importance to Beethoven is well documented, particularly in his letters and notes. Walks in nature and occasional visits to the countryside not only brought the city dweller longed-for relaxation but were also associated with periods of convalescence and spiritual experiences. For example, Beethoven wrote to Therese Malfatti in 1810: “… no one can love the country as much as I do.” In a note from 1815 he declared: “My decree is only to remain in the country. … My miserable hearing does not trouble me here. In the country every tree seems to say to me: Holy! Holy!”

This intimate relationship with nature is undoubtedly the basis for the composition of the Symphony No. 6 in F major, op. 68. The titles of its movements are to be understood primarily as evocative allusions steering the listener’s attention in a particular direction. That Beethoven chose his words carefully is apparent from the unusually long work title of the original edition, published in 1809: “Pastoral Symphony, or Recollections of Country Life (more an expression of feeling than a painting)”. To begin with, it is obvious that the alternative title does not refer to the visualization of nature but rather life in the country – an initial indication that the work is not a musical depiction of nature. This interpretation is supported by the subtitle, in which Beethoven not only puts tone painting in its place (without excluding it) but also makes it clear that the actual theme of his Sixth Symphony is the effect of nature on the individual.

Isabelle Faust already gained musical experience in a string quartet when she was eleven years old. After winning the International Violin Competition “Leopold Mozart” in Augsburg in 1987, she became a student of Christoph Poppen, the long-time leader of the Cherubini Quartet. Her international career took off after winning the 1993 Premio Paganini in Genoa. Isabelle Faust has performed as a concert soloist with, among others, the Munich Philharmonic, the Orchestre de Paris, the Boston Symphony Orchestra, the BBC Symphony Orchestra and the Mahler Chamber Orchestra. Conductors such as Giovanni Antonini, Daniel Harding, Philippe Herreweghe and Mariss Jansons value working together with the violinist. Under the baton of Claudio Abbado she recorded the Beethoven and Berg violin concertos, which received several awards. In addition to the established repertoire, Isabelle Faust is also much in demand as a performer of contemporary works for the violin. Olivier Messiaen, Werner Egk and Jörg Widmann are among the composers whose works she has premiered. She is also passionately committed to the music of György Ligeti, Morton Feldman, Luigi Nono, Giacinto Scelsi, and for long neglected works such as the Violin Concerto by André Jolivet. The pianist Alexander Melnikov is a prominent partner for the artist’s many chamber music activities. Isabelle Faust made her debut with the Berliner Philharmoniker in mid-January 2009 under the baton of Sakari Oramo as the soloist in Robert Schumann’s Violin Concerto in D minor. In her last appearances with the orchestra in May 2012 she performed Alban Berg’s Violin Concerto, conducted by Claudio Abbado. Isabelle Faust plays the “Sleeping Beauty” Stradivarius from 1704, kindly loaned to her by the L-Bank Baden-Württemberg.

Bernard Haitink looks back on a conducting career lasting over 60-years. His close artistic partnership with the Berliner Philharmoniker started five decades ago: in March 1964, he made his debut with the orchestra with a Beethoven programme. Born in Amsterdam in 1929, Bernard Haitink started his career with the Netherlands Radio Orchestra. He was at the helm of the Royal Concertgebouw for more than 25 years (1964 – 1988), and subsequently held posts as music director of the Royal Opera House Covent Garden (1987 – 2002), the Dresden Staatskapelle (2002 – 2004) and as principal conductor of the Chicago Symphony Orchestra (2006 – 2010). In addition, he was principal conductor of the London Philharmonic (1967 – 1979) and music director of the Glyndebourne Festival Opera (1977 – 1988) and the European Union Youth Orchestra (1994 – 1999). For the Lucerne Festival, he has conducted a Beethoven and a Brahms cycle (2008 – 2011) with the Chamber Orchestra of Europe. He is conductor laureate of the Royal Concertgebouw Orchestra and conductor emeritus of the Boston Symphony Orchestra. Bernard Haitink has received many international awards in recognition of his services to music, including both an honorary Knighthood and the Companion of Honour in the United Kingdom, and the House Order of Orange-Nassau in the Netherlands. He was named Musical America’s “Musician of the Year” for 2007 and awarded the Hans-von-Bülow-Medal by the Berliner Philharmoniker. His last concerts with the orchestra were in March 2014 when he conducted works by Mozart and Bruckner.

A Mozart evening with Trevor Pinnock and Maria João Pires