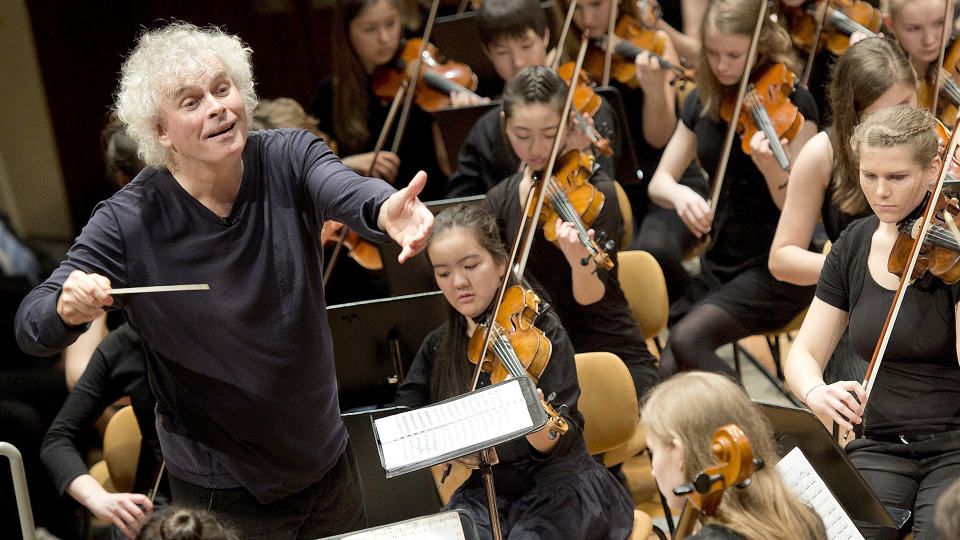 The United States of America may have caught up with the musical nations of Europe relatively late, but it more than made up for it in the music of the twentieth century. The 2017 Berliner Philharmoniker school orchestra extravaganza focused on works “from the New World”. For the 15th edition of the Education project, more than 100 pupils from six Berlin secondary schools gathered in the Philharmonie under the direction of none other than Sir Simon Rattle, chief conductor of the Berliner Philharmoniker.

The extravaganza opened with a rousing dance from Leonard Bernstein’s immortal West Side Story, with the shouts of “Mambo” which are incorporated in the score also being chanted by the audience. The programme also featured a work by John Adams, the Berliner Philharmoniker’s Composer in Residence in the 2017/2018 season. The composer, who was present in the hall, was able to see for himself how much enthusiasm and passion the young musicians displayed in his brief but extremely sophisticated Short Ride in a Fast Machine.

As a lyrical counterpoint to the up-tempo pieces by Bernstein and Adams, they then played the slow movement from Antonín Dvořák’s Ninth Symphony whose theme, first introduced by the cor anglais, is one of the Czech composer’s most lovely ideas. A longing for adventure and a not inconsiderable fee lured Dvořák to New York in 1892, and his three years in America were to prove to be unusually productive. The collaboration of Sir Simon with the school orchestras, documented for the Digital Concert Hall, gives a fascinating insight into the way the conductor works in rehearsal: how he explains the importance of the clearly articulated rhythm in the Adams piece, the way he shows how softly a pianissimo can sound, and during all this, he even gets the instrumentalists to sing.

The Berlin Phil Series: “An American in Berlin”

“40 Years of the Orchestra Academy” Gala Concert with Simon Rattle