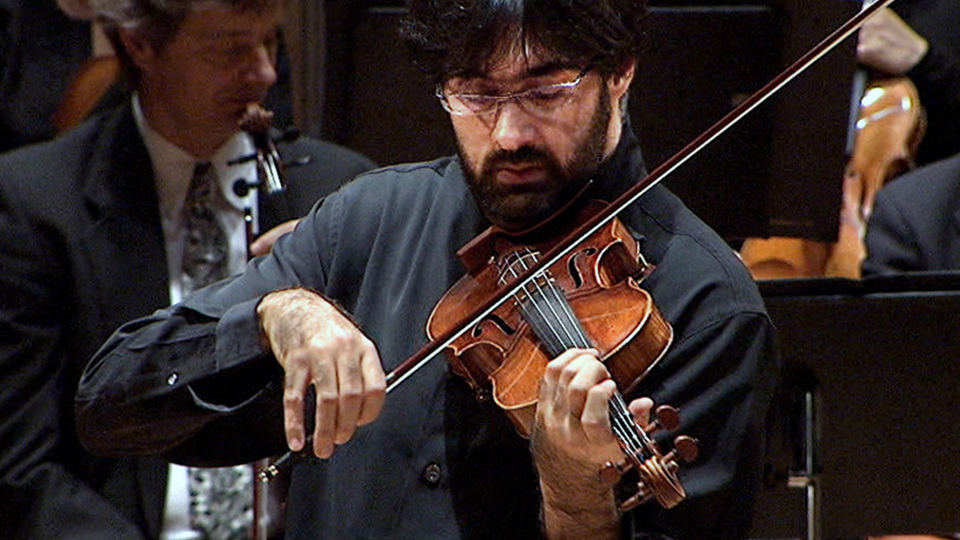 The legendary violin professor Josef Gingold did not believe his ears the first time he heard a recording by Leonidas Kavakos. He could hardly imagine anyone being able to play so quickly and so perfectly without there being some sort of technical trickery used in the recording. However, for the Greek violinist, truthfulness of expression takes precedence over virtuosity, something which the Berliner Philharmoniker audience were able to hear for themselves when Kavakos made a guest appearance with Beethoven’s Violin Concerto in 2009.

It is particularly appealing that Kavakos, who has been familiar with classical Greek culture since boyhood, turns his attention to the works of the First Viennese School. For him, both periods are closely connected in their desire to strive for timeless perfection – which also inspires Kavakos in his work: “Classical antiquity represents an aesthetic standard that has never been achieved since and will perhaps never be achieved again. This aesthetic standard drives me on – as a human being, violinist and musician.”

Conductor for the evening is Zubin Mehta, who performs with the Berliner Philharmoniker with a regularity virtually unmatched by any other podium guest. The evening opens with Schubert’s Third Symphony – a work which formally still harks back to the world of Haydn yet in which a subliminal Romantic yearning can be discerned. Second comes the suite from Bartók’s arresting pantomime ballet The Miraculous Mandarin.

Masterpieces by Schubert, Bartók and Beethoven

Franz Schubert was a musical prodigy – not only as a composer but also as a performing instrumentalist and singer. His father taught him to play the violin; his eldest brother Ignaz gave him piano lessons and taught him to read music. In 1808 he was offered a place as choirboy in the imperial court chapel and simultaneously admitted as a pupil to Vienna’s k.k. Stadtkonvikt (Imperial & Royal City College), where he played in the school’s fine student orchestra. The young Schubert accumulated chamber-music experience in domestic circles, taking the viola part in string quartets, and his musical “apprenticeship” was rounded off with instruction from two court musicians: first with the organist Wenzel Ruzicka, then with the court Kapellmeister Antonio Salieri.

Schubert’s compositional talent manifested itself at an early age. In 1811 he wrote an overture in D major as well as a symphony in D major which, however, remained a fragment. Two further D major overtures followed in 1812/13 along with three sacred compositions. At the end of October 1813, at the age of 16, he completed his First Symphony, written – like the Second, which he finished in 1815 – for the Konvikt’s orchestra. Schubert also composed the Symphony No. 3 in D major in 1815, but it was not performed publicly until February 1881 in London. There are no formal experiments here, unlike the Second; instead one senses a new Viennese, or, more accurately, Schubertian tone. The opening movement, following the model of Joseph Haydn, begins with a slow introduction; but Schubert has a surprise up his sleeve: where one expects the fast main movement he inserts a second introductory section. The agitated Allegro con brio, with the customary main and secondary themes (for clarinets and oboes, respectively), offers the orchestra scope for unfolding some powerful sonorities.

The three-part second movement, chamber musically conceived, is an Allegretto in song form. Then comes the highly accentuated Menuetto, often interpreted as a “disguised scherzo” à la Beethoven; the dance element enters only in the contrasting Trio. In the high-spirited finale, the composer seems to be conjuring up the spirit of opera buffa. Though monothematic, the movement contains some surprising turns and motivic invention. Following a stretto-like section, it ends almost abruptly with four final chords.

The Miraculous Mandarin by Béla Bartók is one of those works that unleashed scandals at their premieres. The composer had begun this ballet-pantomime in 1918, basing it on a text by his compatriot Menyhért Lengyel, but work on the score dragged on until, in 1923, the director of the Budapest Opera House asked Bartók to complete it for performance in the 1924/25 season. It was ready by the beginning of 1925, but the premiere took place, not in Budapest, but at the Cologne Opera House, on 27 November 1926. Its supposedly indecent content triggered a scandal and, following strong protests in conservative circles, the city’s mayor, Konrad Adenauer, forbade further performances.

A closer look at the work’s subject matter – robbery, prostitution and murder – makes apparent why it created such a sensation at the time. In a shabby hotel room, three thugs force a beautiful young girl to seduce men in order to rob them. Her provocative dancing eventually arouses the desire of a Mandarin. When he tries to embrace her, the girl recoils. A struggle ensues, and he catches her. Now the hoodlums come out of hiding. They rob the Mandarin, attempt to smother him with pillows and then stab him with a sword. Finally they hang him from the ceiling light on a hook. But every attempt to kill him is in vain. Only when the girl takes pity on the grievously injured Mandarin and embraces him do his wounds begin to bleed and he dies.

Bartók must have suspected that further staged performances in the near future were not on the cards, so in 1927 he prepared a concert version of the work. This so-called suite – the first two-thirds (roughly 20 minutes) of the complete score – conveys the wildness and contrasts of the full-length original even without the danced action. Bartók’s “most brilliant orchestral work” (Pierre Boulez) is one of elemental power, indeed violence; the compositional means he employs in it are comparable to those used by Stravinsky in his Rite of Spring and Prokofiev in his Scythian Suite. Other strong influences that can be heard in the Mandarin are expressionism and bruitism (the art of noise) as well as experiments with clusters, but there is also a distinctly “Hungarian” tone – something Bartók never relinquished.

Ludwig van Beethoven wrote his Violin Concerto in D major in 1806 for Franz Clement, whose remarkable violin playing was already acclaimed in his childhood. Following the work’s premiere on 23 December 1806, the Wiener Theaterzeitung reported that “the excellent Clement played … a violin concerto by Beethoven, which earned exceptional applause for its originality and some very beautiful passages. … The judgement of connoisseurs … while conceding its many beauties must also acknowledge that the continuity is often broken, and that the endless repetitions of certain commonplace passages may easily become tedious to the listener.”

Although great 19th-century virtuosos took up the work, its initially cool reception was that of a succès d’estime. The turning point came some 40 years after the first performance when Joseph Joachim, barely 13 years old, played the concerto for the first time in London on 27 May 1844. Since then it “it has been part of the ironclad repertoire of every violinist desiring to be more than a mere virtuoso; it has also taken on the significance of a touchstone for the performer’s artistic maturity” (German scholar Andreas Moser in his 1923 History of Violin-Playing). The concerto probably owes its early rejection to the fact that Beethoven did not write a typical showpiece for the violinist. Rather this is a work which, while making great technical and musical demands on the soloist, offers scant opportunity for displaying virtuosic brilliance.

Even today the beginning of the work can seem a bit strange: the extensive Allegro ma non troppo opens with five soft crotchet (quarter-note) beats on the kettledrum, which form the rhythmic germ of the entire movement, followed by a lyrical motif on the woodwind. At the end of the orchestral exposition, the violins and low strings introduce a sweeping third theme in a related rhythm. Only then does the solo violin enter with quasi-improvisational phrases. The five-beat rhythmic figure also pervades the development section before the movement concludes with a solo cadenza and 25-bar coda.

The Larghetto that follows is a disguised variation movement in which the varied element largely involves timbral colour, the theme itself remaining more or less unchanged melodically and harmonically through all the repetitions. A further violin cadenza leads directly to the symphonically constructed, if thematically uncomplicated, final rondo. The violin opens and dominates this dancelike closing movement, the orchestral refrain providing a frame for its lively playing. After a third and final cadenza, the coda leads the rondo theme from pianissimo regions with subtle harmonic twists and turns to a life-affirming fortissimo close.

Zubin Mehta and the Berliner Philharmoniker can look back on a long musical partnership that started in September 1961. Mehta was born in Bombay in 1936 and studied under Hans Swarowsky at the Vienna Academy of Music. The winner of the 1958 International Conductors’ Competition in Liverpool and of the Koussevitzky Competition in Tanglewood, he was by his mid-twenties already principal conductor of the Montreal Symphony Orchestra, where he remained from 1961 to 1967, while holding a similar appointment in Los Angeles from 1962 to 1978. Also at this time he made his debut with the Vienna Philharmonic and replaced an ailing Eugene Ormandy at the helm of the Israel Philharmonic, becoming the Israel PO’s music director in 1977. Since 1985 he has also been principal conductor of the Teatro del Maggio Musicale in Florence: both institutions have named him their conductor for life. He was also principal conductor of the New York Philharmonic from 1978 to 1991. In addition to his engagements in the concert hall, Zubin Mehta has also appeared in many of the world’s leading opera houses and from 1998 to 2006 was general music director of the Bavarian State Opera and Orchestra in Munich. Among the numerous honours that Zubin Mehta has received are the United Nations’ Lifetime Achievement Peace and Tolerance Award in 1999, membership of the French Legion of Honour in 2001 and the Bavarian Order of Merit in 2005. The Gesellschaft der Musikfreunde in Vienna appointed him an Honorary Member in 2007, and in 2008 he was honoured with the “Praemium Imperiale” by the Japanese Imperial Family. Zubin Mehta last appeared with the Berliner Philharmoniker in January 2009, when he conducted works by Elliott Carter, Ludwig van Beethoven and Richard Strauss.

Leonidas Kavakos was born in Athens, Greece, in 1967 and started playing the violin at the age of five. After studies at the Greek National Conservatoire in his hometown, an Onassis Foundation scholarship enabled him to attend master classes with Josef Gingold at Indiana University. In 1985 he won the Sibelius competition and then the Paganini competition in 1988. Following these successes, he received invitations from all corners of the world. Kavakos now appears in concert with the world’s great orchestras and conductors both in Europe and in North America, in addition to regular visits to renowned festivals worldwide. In 1991, Kavakos won the Gramophone Award for the first recording ever of the original version of Sibelius’ Violin Concerto (1903/04). His partners in chamber music include Natalia Gutman, Heinrich Schiff, Emanuel Ax und Lars Vogt. After having held the position of Principal Guest Artist of the Camerata Salzburg for six years, Kavakos was Artistic Director of the orchestra from 2007 until September 2009. He gave his debut as soloist with the Berliner Philharmoniker in May 2003 with the Sibelius Concerto. His last appearance with the orchestra was in February 2006 under the direction of Donald Runnicles with the Brahms Violin Concerto. Leonidas Kavakos plays the “Falmouth” Stradivarius of 1692 and an instrument made by Giovanni Battista Guadagnini (Torino, 1782).