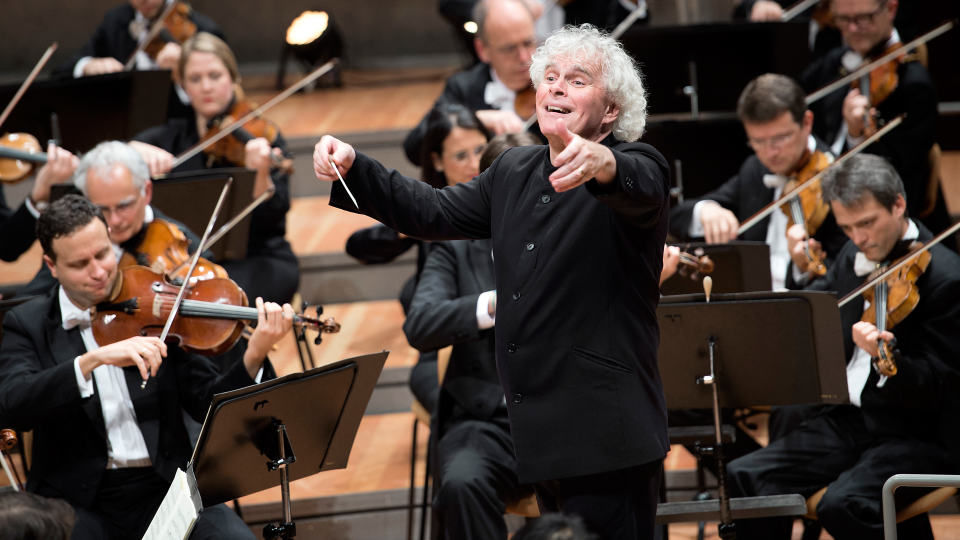 Beethoven began working on his Fifth Symphony in 1804, even before finishing the Eroica. Before the piece was completed in the spring of 1808, however, the composer chose to set himself to yet another symphonic work: the conceptually evidently less problematic Fourth, which appears in the words of Robert Schumann like a “slender Greek maiden between two Nordic giants”, whereby “Greek” – no doubt intended positively by Schumann – probably stands primarily for “classical”, i.e. “in accordance with known form”. In 1844 Hector Berlioz wrote about this work, with which Sir Simon Rattle continues his Beethoven cycle: “Here Beethoven leaves ode and elegy completely to return to the less sublime and less gloomy but perhaps no less difficult style of the second symphony. The general character of the score is lively and alert, of a celestial sweetness.”

Four years after the Fifth and Sixth Symphonies, Beethoven then composed his Seventh, premiered jointly on 8 December 1813 with the resounding portrait of a battle Wellington’s Victory or The Battle of Vittoria op. 91 at a charity concert “in the best interest of the Austrian and Bavarian soldiers who became invalids in Hanau”. Thus, his contemporaries understood the two works to represent the unity of “battle” and “victory”. Through late February 1814 there were two repeat performances at each of which the second movement – deemed by the press “the crown of the newer instrumental music” – had to be played again. It’s no wonder that Beethoven’s Seventh with its vision of victory in the first movement, the hymn-like passages of the Scherzo and the ecstatic rhythms of the Finale became extremely popular within a very short time. The reviewer of the Leipzig Allgemeine musikalische Zeitung described the work as the “most melodious, most pleasing and most comprehensible among all Beethoven’s symphonies”. More than a century later, Theodor W. Adorno even called the piece “the symphony par excellence”.

“Waiting to learn whether or not fate will hear us”

Every symphony by Ludwig van Beethoven is unique. Each has its own unmistakable character, its special personal and historical background. Beethoven’s Symphony No. 4 in B flat major op. 60 is no exception. The only one of the nine about whose genesis we know virtually nothing, it is also the most modestly scored. Beethoven’s contemporaries found it humorous and easy to grasp – thus worthy of imitation. The Fourth as a Classical cache of cheerfulness – that was the prevailing hermeneutic characterisation of the work for decades. But there were also some diverging opinions, and the work seems quite early to have gained a reputation as being Beethoven’s most Romantic symphony.

The introduction opens the gates to a mysterious, twilit world. Woodwind and horns sound the note B flat pianissimo over five bars, but already in the second bar the strings add a G flat, a note without the slightest relation to B flat major. Further contrast comes from the alternation of legato and staccato. Both stylistic devices (the “wrong” G flat and the changing articulation) also distinguish the ensuing Allegro vivace. And only seldom are the main themes with their tendency to bucolic light-heartedness able to unfold without suddenly being swept up in a maelstrom of powerful activity and abruptly intruding fortissimo chords. The fundamental experience seems to be the dynamic process itself, not the savouring of melodic ideas.

This ambiguity emerges even more clearly in the second movement, which begins with a hesitant oscillating figure on the second violins. The songlike main theme is never able to maintain the upper hand for long: it is constantly bumping up against disruptive repeated notes and obstructions to the musical flow. The lively Scherzo marked by cross-rhythms that follows suggests a “German Dance” of the sort Beethoven would have encountered at any country inn. A serenade-like Trio section at first promises repose but soon rises to majestic heights. The movement is also formally novel in presenting the Trio twice and, consequently, the Scherzo section three times.

A similar impression is made by the concluding Allegro non troppo: in this work, for the first time, the “how” of the music is more important than the “what”. There is hardly anything here that can be identified as a principal theme in the Classical sense. Only gradually are short motifs peeled off the strings’ whirling semiquaver (16th-note) runs, interrupted by punching dissonant chords. This exceptionally virtuosic finale is unquestionably full of humour, but a wild, odd, at times frenetic humour.

In looking for the work’s background, we can probably rule out the importance of the Napoleonic Wars then raging. A debatable theory regarding the Fourth began circulating at the end of the 19th century, when various publications appeared on the subject of Beethoven’s “Immortal Beloved”. The majority of scholars dated three unaddressed love-letters to the year 1806 and saw in them a model for the symphony’s uncertainty and emotional ambiguity. In the letters Beethoven describes his mental state as “now and then joyful, then sad, waiting to learn whether or not fate will hear us”.

Scholars have since disproved the assumption that these famous letters were written in 1806, and yet the love hypothesis remains convincing. Many sources report that Beethoven was “never out of love and usually was much affected by the love he was in at the time”. Thus the composer must typically have found himself in that ambivalent state of mind of which the letters speak. Clearly, Beethoven’s Fourth cannot be reduced to a symphonic love story, but just as clearly we cannot simply ignore the relevance of his largely unrequited amours. Resolving these issues, however, is as problematic as fully fathoming the work’s character, shifting between passionate, lyrical and demonic.

One of the essential features of Ludwig van Beethoven’s mature compositional style is his strategically applied development of musical material, something that links him with later composers including Brahms, Schoenberg and even Webern. A good example is the slow introduction of the Seventh Symphony, composed in 1811–12. Out of the tense opposition of sustained notes and rising scales, a dactylic dotted rhythm emerges; suddenly hurtling into a fast tempo, it expands into a dancelike idea resembling the south Italian tarantella. That little rhythmic cell has generated the movement’s principal material. Intoned first on flute, it develops in the orchestral tutti into flying sparks of symphonic fire. Even the inconspicuous subsidiary theme and the development section fall into the tarantella rhythm, whose driving power dominates the movement right through to the recapitulation and exhilarating coda.

The symphony’s dancelike character – Wagner famously called Beethoven’s Seventh “the apotheosis of the dance” – is not confined to the impulsive expression of joie de vivre. The Allegretto second movement follows a similar course but at a more measured pace. In sombre A minor, its endless repetition of a pattern of one long and two short note-values evokes the chanting of a funeral procession or pilgrimage. The tense mood dissipates in the unbridled exuberance of the Scherzo, a Presto in ¾ time. In the slower Trio section, the lower winds and violins put the brakes on the whirling dance for a moment of breath-catching.

In the finale, the main idea no longer whirls, it positively reels. Syncopic accents generate incredible dynamism, while the violin melody further ratchets up the tension. The frenzied hedonism is momentarily checked by a fanfare-like secondary theme: as though the rollicking orchestra were being called to order, the strings, followed by the wind, now execute the symphony’s dominant dotted rhythm with dogged discipline. At the symphony’s tumultuously acclaimed premiere in December 1813, the Viennese audience – who had already demanded an encore of the Allegretto – may have welcomed the suggestion of military music at this point. And, in the fortissimo fanfare and sharp accents at the symphony’s triumphant conclusion, they may have heard an allusion to the European coalition’s recent victory at the Battle of Leipzig, celebrating their liberation from Napoleonic domination.