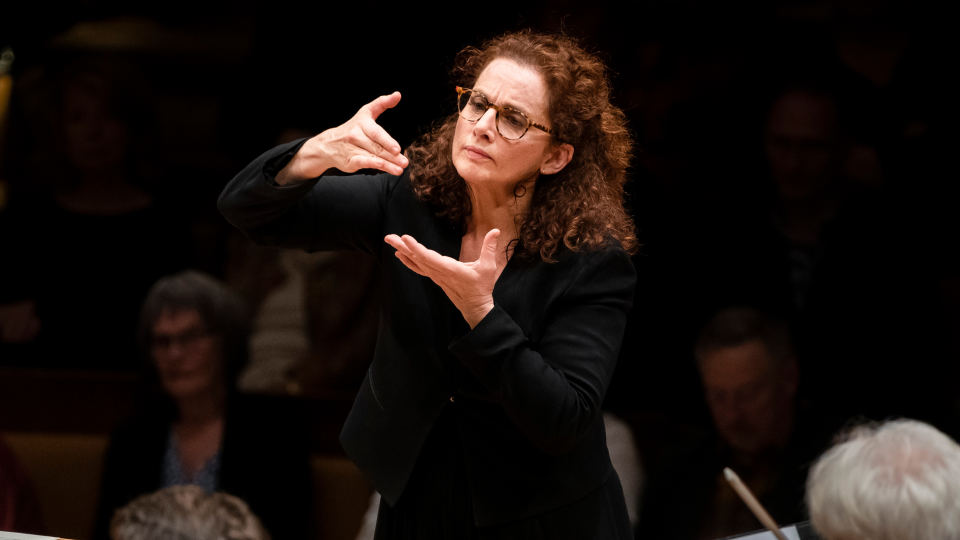 The conductor’s desk is one of the final male bastions in the Arts. All the more remarkable then, are the female artists who have found their way to this position. The Early music specialist Emmanuelle Haïm says of herself that she wanted to do the job when she was just a 12-year-old. However, for many years she performed as a cembalist in the Baroque music orchestras of William Christie and Christophe Rousset. Since then, she has progressed to leading her own ensemble, Le Concert d’Astrée, and through many energy-packed concerts, she has gained a reputation for herself as a “powerhouse interpreter”. (The New York Times)

For her concert with the Berliner Philharmoniker – the second since her debut in 2008 – Emmanuelle Haïm programmed some of the most beautiful and varied orchestral suites of the Baroque. The most famous of them is undoubtedly George Frideric Handel’s Water Music. Its spectacular first performance took place on 17 July 1717 during one of King George the First’s magnificent barge outings. He was so taken with the work, that he immediately had it performed three times in a row. As a matter of interest, the last time the Berliner Philharmoniker played this evergreen before this concert was more than 25 years previously in 1984, under the direction of Riccardo Muti.

Jean-Philippe Rameau stands alongside Handel as the focus of the evening, one of the most exciting composers of his time. Rameau’s speciality was dance suites which he integrated into his many operas, endowing them with a hitherto unknown richness of sound and sophistication. The spectrum of expression of this music particularly impresses, ranging from melancholy dreams to biting parody, from love songs to wild folk dances – a unique panorama of Baroque emotions.

Musique royale from both sides of the Channel

Orchestral pieces by Handel and Rameau

George Frideric Handel did well to tout his London works by including in their titles the buzz-word “royal”. His Music for the Royal Fireworks sold as well as “royal wedding” souvenirs do nowadays. Even the pieces he contributed to royal weddings caused a stir. The first hit in this long series of works for the House of Hanover was the Water Music. King George I had presented his court ceremonial machinery with a seemingly impossible challenge: a concert to accompany a royal progress on the Thames on 17 July 1717. Even the organizer, Baron Kilmanseck, was unable to solve the problem of how to sell tickets for such an event, not to mention how seats could be reserved. In the end there was no admission fee, and the baron was obliged to pay the musicians – numbering more than 50 – out of his own pocket.

Handel’s Water Music comprises 22 movements of the most diverse style and scoring. The master mixed Italian concerto movements with French dances, interspersed English tunes such as hornpipes and delighted in exploiting the effect of pitting string and wind choirs against one another. Formerly it was thought that Handel neatly divided this effective alternation of scoring into three different suites. Since the Handel scholar Terence Best re-discovered the oldest fair copy of the Water Music in a London archive, however, we know that the composer blithely allowed the order of movements to be shuffled for maximum variety.

Emmanuelle Haïm has opted for the traditional sequence, but she positions the Water Music Suite No. 3 in G major HWV 350 before the erstwhile first suite. Thus we immediately hear the lovely Sarabande in G major for flutes and strings with its pastoral retinue – three pairs of Rigaudons, Menuets and Gigues, all of which evoke the enchantment of the English landscape in the evening light as it presented itself in 1717 to the king’s eye on the banks of the Thames. The Water Music Suite No. 1 in F major HWV 348, in contrast, begins royally: with a French overture. After it the “French” horns sound their fanfares while oboes and strings engage in diverse dances.

The London theatre contributed decisively to the Water Music’s popularity: a few years after the royal barge cruised on the Thames, the newspapers advertised the presentation of movements from the suites as entr’acte music in Shakespeare’s plays. It was specifically with this purpose in mind – although for performances of his own oratorios – that Handel in autumn 1739 composed his twelve Concerti grossi Op. 6. The first work in the group, the Concerto grosso in G major HWV 319, would have fulfilled that function most beautifully: the beginning seems to make the commanding gesture of an actor or the entrance of a king. It is followed by an Allegro whose modern, galant features Handel appropriated from a harpsichord piece by Gottlieb Muffat. The fourth-movement fugue expounds a superb triadic theme, which is treated to all the rules of that art, while in the finale Handel, with flags flying, rushes into the arms of the galant style.

The theatrical career of Handel’s great contemporary Jean-Philippe Rameau was founded from the start on two elements: the powerful emotions in his operatic scenes and the magic of his dances. Both were seamlessly interwoven in the form of 18th-century French opera. All five acts of a tragédie lyrique invariably led to a dance scene, a so-called divertissement: dances, danced solo vocal and choral numbers were combined into impressive tableaux, whose range of diversions for the spectators was as wide as can be imagined. It extended from idyllic village and harbour scenes to the terrors of tonnerres and tempêtes, the obligatory thunderstorms and tempests at sea. Dance was even more dominant in the opéra-ballet, a kind of revue consisting of several danced and sung acts – the sensuous counterpart to the seriousness of tragic opera.

In both genres Rameau immediately set new standards with his first two works, including their dances: Hippolyte et Aricie from 1773, his first tragédie lyrique, contains dance scenes of a previously inconceivable luxuriance and sophistication. In Les Indes galantes,his first opéra-ballet, he further heightened this refinement in the orchestration and rhythm. The master from Dijon opened the gates to the Rococo, leaving behind the stiffness of the late Baroque and the moderation of the French Regency.

Our two suites from stage works by Rameau both begin with an overture. The first, to the opera Dardanus (1739), is appropriately festive in its dotted rhythms and gripping in the tremolos of its Allegro section. Then follows an enchanting pantomime from the opéra-ballet of the same year Les Fêtes d’Hébé: swathed in the suave string tone of an air tendre, Apollo, leader of the Muses comes out of his temple, dancing, in order to join the spirit of Mars in a round dance. The delicate suspensions of the air tendre are abruptly followed by the fanfares of victory.

We enter the fantastic world of “the amorous Indies” – by which Rameau means the West Indies, i.e. America – with a dance of the flowers. Turks and Persians, Incas and Indians make up the exotic dramatis personae of an intercultural revue about the strategies of galanterie. Rameau depicts a grotesque side of nature in Platée,his comédie-ballet of 1745: to the sound of croaking frogs, the ugly nymph Plataea dreams of the love of Jupiter, king of the gods. He pretends to go along with her wooing, impresses her with grotesque transformations and finally exposes the farce. The syncopations in the first Rigaudon and the whinging repeated notes in the second give a hint of the biting sarcasm of the operatic satire.

Battle noises and a chaconne

The beginning of our second Rameau suite is far more extreme than that of the first: it is the Overture to Naïs, an opéra-ballet that was performed in 1749 as a “peace opera”, fulfilling the same task in Paris as Handel’s Royal Fireworks Music in London, to celebrate the Treaty of Aix-la-Chapelle which ended the War of the Austrian Succession. Rameau’s overture is, admittedly, anything but peaceful – a real bruit de guerre consisting of blaring trumpets, wild horn syncopations and thundering timpani rolls. There is a hint of melancholy in the Sarabande from the same work, whereas the two following Rigaudons imitate the rustic wildness of folk dances.

Pastoral and stormy scenes are also mingled in the excerpts from Hippolyte et Aricie. Finally, our second suite is crowned by one of Rameau’s greatest movements: the Chaconne from Dardanus. The big ensemble dance, obligatory even in tragédie lyrique, brought all the dancers together on stage. The soloists showed their mettle in the couplets with pas seul and pas de deux, while the constantly recurring orchestral refrain was intended for the corps de ballet. The sheer beauty of this rondeau, its subtle scoring and triumphant ending elevate the Baroque form of the chaconne to a symbol of the ancien régime.

Emmanuelle Haïm studied piano with Yvonne Lefébure, organ with André Isoir and cembalo with Kenneth Gilbert and Christophe Rousset at the Paris Conservatoire National Supérieur de Musique, where she herself now teaches singers Baroque performance practice. A prize winner of many competitions, she is among the leading continuo players of the opera, chamber music, concerto and solo repertoire in this field. Natalie Dessay, Ian Bostridge, Philippe Jaroussky and other singing stars regularly invite her as accompanist for their solo performances. As an assistant, the musician has worked together with conductors such as William Christie, Marc Minkowski and Sir Simon Rattle. In 2000, Emmanuelle Haïm founded the Baroque ensemble Le Concert d’Astrée with other like-minded singers and instrumentalists. Furthermore, she has conducted several Baroque operas for Glyndebourne Touring Opera and the Glyndebourne Festival since 2001. She has also made guest appearances with, among others, the Orchestra of the Age of Enlightenment, St. Paul Chamber Orchestra (USA), HR-Sinfonieorchester Frankfurt and the Deutsches Symphonie-Orchester Berlin; Emmanuelle Haïm first conducted the Berliner Philharmoniker in March 2008 in concerts of Handel’s Ode for St. Cecilia’s Day HWV 76. At the invitiation of the Berliner Philharmoniker Foundation, she also appeared as part of the Originalklang concert series in the Chamber Music Hall with Le Concert d’Astrée. The artist is an honorary member of the Royal Academy of Music; in France she has been awarded the order “des Arts et des Lettres” and the Légion d’honneur.