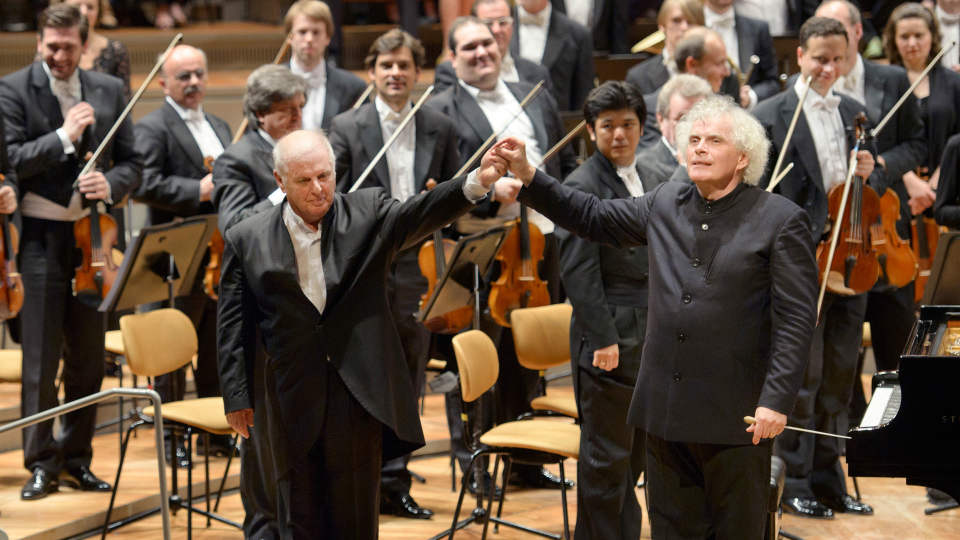 The gestation of Brahms’s First Symphony, begun in 1862, lasted a quarter of a century. Hearing behind him “the marching of a giant like Beethoven”, the composer had already tried eight years previously to revise the first movement of a sonata in D minor for two pianos and make it into the first movement of a symphony – but without success. Brahms had a dream that he made a piano concerto out of that “accursed” Symphony – which he eventually did.

“A first movement, a scherzo, and a finale, terribly difficult and grand. I was absolutely transported.” Although it would take another four years before the work was completed, the result, the D minor Concerto op. 15, was something to be truly proud of. With this concerto, Brahms created a highly virtuosic work that, with its symphonic fusion of piano and orchestral roles, left the dimensions of what was expected of a concerto up to that point far behind. Daniel Barenboim, who in the 2013/2014 season celebrated the 50th anniversary of his debut with the Berliner Philharmoniker, is the soloist in Brahms’s powerful and monumental concerto.

The concert opens with Charles Ives’ orchestral piece The Unanswered Question. In this work, written in 1906 (revised 1908), the composer presents “the perennial question of existence” (Ives) seven times, symbolised by a trumpet. Every time, the search for an answer becomes more hectic before the violins fade away (with no response) into the void. Finally, Sir Simon Rattle conducts Richard Strauss’s 1945 Metamorphosen for 23 solo strings, in which the funeral march theme from Beethoven's Sinfonia Eroica seems to be developed and at the end is quoted explicitly by the double basses in Strauss’s own harmonisation. At this point in the score is the entry “In memoriam” – not without reason did the composer describe the piece as the “reflection” of his “entire past life”.

“No one can really know himself”

The Unanswered Question by Charles Ives

In the background, an unbroken, disembodied, shimmering stream of sound, a chorale of sorts in the muted strings. The unvarying, harmonically open-ended phrase of the solo trumpet rings out above it seven times. Stoically but relentlessly, it seems to articulate a probing question. Four flutes answer, still tentative and hesitant at first, then they become increasingly more vehement, more dissonant. Until – molto agitando, con fuoco – they erupt with hysterical cries in the highest register. Once again the trumpet poses its question, but now the flutes are silent. Only the distant chorale remains. When Charles Ives revised his brief orchestral work The Unanswered Question, which he had composed between 1906 and 1908, along with its companion piece, Central Park in the Dark, in the 1930s, he added an introduction to the score, offering an interpretation of the work. The strings, Ives wrote, represent “the silence of the Druids, who know, see and hear nothing”, while the trumpet asks “the perennial question of existence” until the “fighting answerers” realize the futility of their rage.

Almost never in the history of music has an entirely new compositional style appeared that is as impressive, amusing and atmospheric as Ives’s “Contemplation of a Serious Matter”, the subtitle of The Unanswered Question. That does not alter the revolutionary character of the work, however. The young composer from Danbury, Connecticut – who had devoted himself professionally to the insurance business in 1898, where he would accumulate a substantial fortune – superimposes three completely heterogeneous layers, which do not intersect. Several techniques which the European avant-garde would adopt only gradually during the subsequent decades, such as spatial effects, montage techniques, emancipated dissonance and polytonality, are found here on just a few pages.

Towards the end of the Second World War, the 80-year-old Richard Strauss thought his life’s work was completed. Depressed about the decline of a musical culture whose highest achievement he believed to be his own oeuvre, he devoted himself rather half-heartedly to arrangements of earlier works but otherwise was almost silent. The creative surge of his late works could scarcely have been expected – Vier letzte Lieder (Four Last Songs), the Oboe Concerto and Metamorphosen, whose delicate texture and tender intimacy arouse emotion and admiration, even among confirmed Strauss sceptics. When Strauss continued to compose after Capriccio, which was premiered in 1942, it was on the assumption that these were “workshop dabblings with no significance whatsoever for music history”. It was only logical that he did not give any of these works opus numbers.

Initially a simple “study”, Metamorphosen developed into a confessional work which undoubtedly also expressed Strauss’s “mourning for Munich”, since a sketch dating from 1943 containing a theme related to Metamorphosen bears this title. The elegiac string work also reflected the resignation and uncertainty of an artist who sought consolation in Goethe again in his old age. In 1944 he copied out lines from Goethe’s Zahme Xenien (Tame Xenia): “No one can really know himself, / Separate himself from his inner being; / Yet he tries every day, / What outwardly is finally clear, / What he is and what he was, / What he can and what he may.” Strauss associates the idea of identity with Goethe’s concept of plant metamorphosis – as a transformation of the form while the core remains the same.

Applied to musical structure, this idea of metamorphosis seems to amount to a revolving motion with no immediately discernible direction. Only gradually does the work reveal itself as a piece with seven distinct themes. The first four are presented in succession at the opening tempo (Adagio ma non troppo); the sombre second theme is particularly striking, a descending viola line in Lombardic dotted rhythm (short-long, short-long) beginning with three upbeat crotchets. The three subsequent themes gradually increase the tempo; they have a tendency towards clearer orchestration and increasing harmonic stability. Rather than encroaching on the substance of these forms, Strauss works with constantly changing reflections and associations. He exploits the latent relationships between the individual elements with the combinatorial mastery of an operatic composer who knows all the tricks of the leitmotif technique. Moreover, the soloistic use of the twenty-three strings allows a wide range of light-dark and solo-tutti effects.

The tension of the lengthy work derives from its structure, a kind of sonata form. The extended exposition is followed by a contrapuntally condensed development of the thematic material, which then leads into the extremely abbreviated recapitulation with a dramatic drop of two and a half octaves. The coda follows after an abrupt general pause; from tremendous agitation it gradually descends into silence. At the close, the funeral march from Beethoven’s “Eroica” is quoted literally in the cellos, under which Strauss wrote the words “In memoriam!”. There has been a great deal of discussion about what this means. In 1947 a Dutch newspaper alleged that it was intended for Hitler, who had disappointed Strauss’s hopes just as Napoleon had disappointed Beethoven’s. Based on what we know today, that seems absurd. The spiritual inspiration of Goethe and Beethoven suggests instead that Strauss bids farewell to a culture here – his culture – which he mourns as lost for ever.

Nearly a century earlier, Johannes Brahms also went through a difficult emotional period, in his early twenties. Robert Schumann’s suicide attempt during the Düsseldorf carnival festivities in February 1854, which resulted in his voluntary admission to the mental hospital in Endenich near Bonn, was undoubtedly a traumatic experience for Brahms. His close friend Joseph Joachim later told Max Kalbeck, Brahms’s biographer, that the principal theme from the first movement of the D minor Piano Concerto had emerged directly from the image of Schumann’s plunge into the Rhine. Although no onomatopoeic visualization of this idea can be heard in the opening bars, the rumbling timpani roll, the bizarrely jagged lines, with their accelerated trills, and the harmonic ambiguity indicate extreme agitation, even desperation, which we do not encounter again in this form with Brahms. The overall development of the monumental Maestoso leads us to assume that the shock of this experience may have been the cause of the tragic prevailing mood of the movement, while more abstract principles influenced the form. Brahms presents a bewildering profusion of themes; they are skilfully woven together and treated imitatively at times. Moreover, nearly all of them appear in two forms: both lyrical and as a bold forte.

“I am also painting a lovely portrait of you; it is to be the Adagio,” Brahms wrote Clara Schumann in December of 1856. The fact that he added the words “Benedictus qui venit in nomine Domini” (Blessed is he who comes in the name of the Lord) above the opening bars in the score of this solemn middle movement has led to a great deal of conjecture in the literature. It is difficult to judge whether this is to be interpreted as a general allusion to its religious atmosphere, or whether Clara could be explicitly addressed as a surrogate for her husband, who had recently died. Constantin Floros even speculates that Brahms toyed with the idea that he himself was God’s emissary to Clara. The last movement, in rondo form, is free of biographical subtexts; its formal structure is influenced in every detail by the finale of Beethoven’s Third Piano Concerto. The combination of the Baroque style of the principal theme with the sumptuous tone of the subsidiary idea is typical of early Brahms.

Daniel Barenboim was born in Buenos Aires in 1942 but moved to Israel with his parents ten years later. His first piano teacher was his mother, followed by his father. He was ten when he made his professional debut in Vienna and Rome, and it was not long before he was undertaking international tours. He made his conducting debut in London in 1967 and since then has appeared with leading orchestras throughout Europe and the United States. The most important stages in his career to date have been as principal conductor of the Orchestre de Paris from 1975 to 1989, as music director of the Chicago Symphony Orchestra from 1991 to 2006 and as general music director of Berlin’s Staatsoper Unter den Linden since 1992. In the autumn of 2002 the Berlin Staatskapelle appointed him principal conductor for life. Since the autumn of 2011 he also holds the post of Music Director at the Teatro alla Scala, Milan. Barenboim additionally appeares as guest conductor at international opera houses and renowned festivals.

Daniel Barenboim and the Berliner Philharmoniker can look back on an artistic partnership lasting exactly fifty years. It was in June 1964 that Barenboim made his debut as pianist with the orchestra in Béla Bartók’s First Piano Concerto under the direction of Pierre Boulez. He first conducted the orchestra five years later with works by Haydn, Beethoven and Schumann. At his most recent appearance at the Europakonzert on 1 May 2014 he conducted works by Nicolai, Elgar and Tchaikovsky. As pianist, he performed together with Guy Braunstein in the series Concertmaster in April 2013.

In 1999 Barenboim and the Palestinian writer Edward Said set up the West-Eastern Divan Workshop, which every summer brings together young musicians from Israel and the Arab countries in order that the shared experience of communal music-making may encourage dialogue between the different cultures of the Middle East. In 2002 Barenboim and Said received the Príncipe de Asturias Prize for their peace efforts in fostering international understanding. Among the many awards that Daniel Barenboim has received are the Grand Cross of the Order of Merit of the Federal Republic of Germany and the Ernst von Siemens Music Prize; he was named »Grand officier dans l’ordre national de la Légion d’honneur« in France and »Knight Commander of the Most Excellent Order of the British Empire«.

Gustavo Dudamel conducts Tchaikovsky and Brahms at the Waldbühne