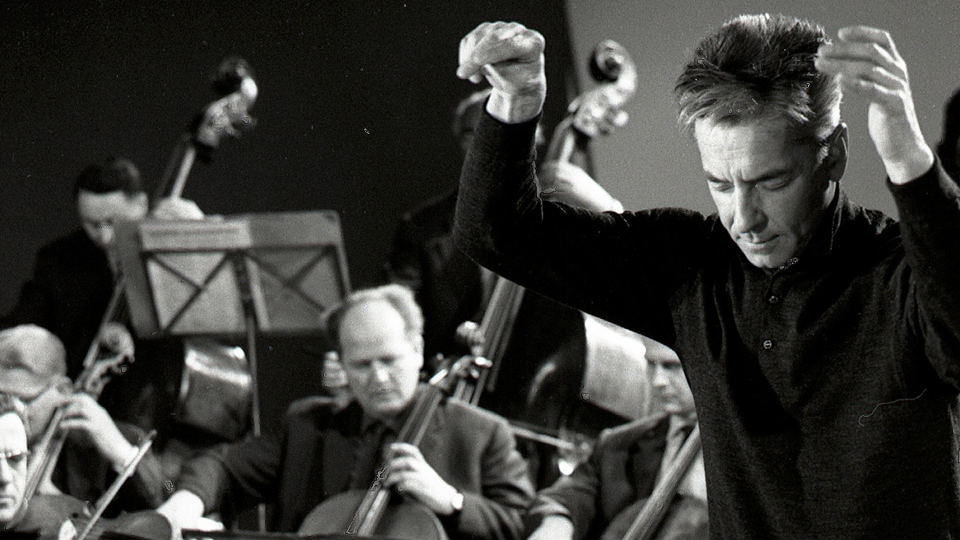 The Art of Conducting was the title given by Herbert von Karajan to the series of innovative music documentaries which he made in the mid-1960s with the distinguished French director Henri-Georges Clouzot. Karajan loved to know how things work and was convinced that in the modern world others thought likewise. At the same time he was convinced that too little was known about his own profession and that of the orchestral musicians with whom he collaborated. His aim in The Art of Conducting was to throw fresh light on this.

Karajan used a variety of combinations. In the Schumann programme it was rehearsal and performance; in the Dvořák it was conversation and performance. For this Beethoven film a further element is added, as an apprentice conductor is shown how to rehearse the slow movement of the Fifth Symphony. Karajan would tell students: “I cannot tell you how to conduct but I can tell you how to rehearse in such a way that in the concert you will not need to conduct.”

Karajan believed that words can establish an idea which will help unlock the music’s essential character. He also believed in the need for musicians to imagine the sound they require; lodge that in the mind and the fingers will do the rest. What Karajan does not say – though his comments during the rehearsal vividly demonstrate the fact – is how any aspiring conductor must know in the finest of fine detail the inner workings of the piece he is about to conduct.

The Berliner Philharmoniker have long been known for the visceral intensity of their music-making. In this 1966 film, Clouzot’s cameras set out to celebrate the corporate togetherness of the Berlin musicians playing in the context of Karajan’s own high-octane reading of this most celebrated of symphonies.

Andris Nelsons and Matthias Goerne with works by Tchaikovsky and Mahler