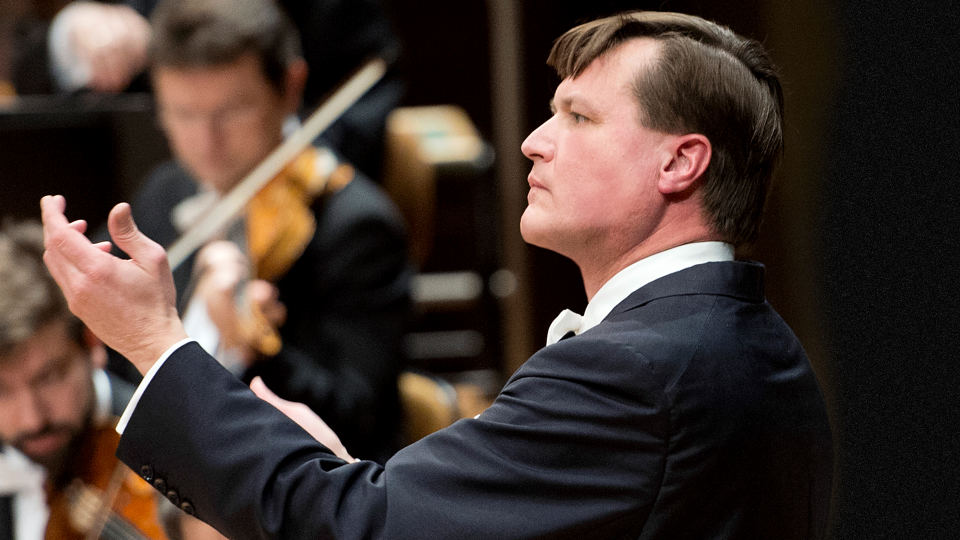 Brahms composed choral music throughout most of his life. It is not only this regularity but also the emotional depth and range of these works that allow us to sense how particularly important they were to the composer. Conductor and choirmaster John Eliot Gardiner once said: “They were the vessels for some of his most profound thoughts, revealing at times an almost desperate urge to communicate things of import. Solemnity, pathos, terror and jubilation are all experienced and encapsulated.” In 2009, Christian Thielemann, one of the most notable interpreters of German late-Romantic music, conducted three of these works: Nänie, Gesang der Parzen and Schicksalslied, with the Rundfunkchor Berlin, partners of the Berliner Philharmoniker for many years, taking on the choral role.

The concert closes with Schoenberg’s tone poem Pelleas und Melisande – a work that, with late-Romantic power and a luscious sound clearly inspired by Richard Wagner and Richard Strauss, recounts Maurice Maeterlinck’s drama of jealousy. The response from the audience and the press to the performance by Christian Thielemann and the Berliner Philharmoniker was rapturous. Das Neue Deutschland wrote: “His striving for clear structures and a vibrant sound development was downright triumphant. ... Intensive, even passionate expressiveness right to the dark ending. The orchestra was magnificent, inspired to even higher musical heights and charisma by Christian Thielemann.”

The Workings of Fate

Music and poetry in Johannes Brahms and Arnold Schoenberg

Is there a music for the end of time? The symphonic vocal works of Johannes Brahms would seem to suggest that. Although he apparently found musical Classicism an overwhelming burden, Brahms surely proved himself up to its challenge in such works from the 1870s as his “Haydn” Variations op. 56a, his first two symphonies and the Violin Concerto. On the other hand, his reply to the characteristic dilemma of late Classicism came in the form of vocal farewells and laments, with the Schicksalslied (Song of Destiny) op. 54 (1868–71), Nänie op. 82 (1880/81) and Gesang der Parzen (Song of the Fates) op. 89 (1882). The attitude articulated in them was summed up by the composer in 1896, at the end of his life: “I really don’t know where music is heading. It seems to me that it’s about to stop altogether!” Ten years later, a momentous aesthetic upheaval did indeed occur, and a new musical age began; its key exponent, Arnold Schoenberg, must have encountered Johannes Brahms on the streets of Vienna.

In ancient Rome, Nänie (Lat.: “nenia”) denoted a funeral song of no fixed literary features, sung at a burial ceremony to flute accompaniment. Friedrich Schiller gave his Nänieof 1799 the form of an elegy in distichs with alternating hexameters and pentameters, and Brahms’s setting,op. 82, is governed by the poetic structure of Schiller’s text: within an ABA form, it achieves the greatest possible correspondence with the verses and strophes. The broad-spanning elegiac orchestral introduction opens “dolce espressivo” with three softly descending tones, a semantically significant gesture of farewell that is also heard in Beethoven’s Les Adieux, op. 81a. But unlike the Beethoven piano sonata, in the Brahms there is no meeting again: his Nänie ends with the instrumental introduction – now serving as postlude. “By the way,” Brahms reportedly later asked his publisher Fritz Simrock in this connection, “did you notice that I have clearly said adieu as a composer?”

Immediately after Nänie,in the early summer of 1882, Brahms composed his next symphonic choral work, Gesang der Parzen op. 89. It would be his last as well as his darkest essay in this genre. An encounter with the celebrated tragic heroine Charlotte Walter at Vienna’s Burgtheater may have instigated its composition. “He admired the great tragedian”, wrote Brahms’s biographer Max Kalbeck, “whose performance reached its peak in her delivery of the ‘Song of the Parcae Fates’ at the end of the last act of Goethe’s Iphigenia in Tauris.” Her “deep, readily modulated voice” transformed the “recitation into song”.

Brahms’s predominantly homophonic setting is laid out in five sections. The prevailing mood is dark and dismal, and yet the F sharp minor chord at the beginning turns to major at the end. “I think that the appearance of the major key alone must soften the heart and moisten the eye of the innocent listener. Only then does he grasp the whole of humanity’s misery.” It is fascinating how Brahms endows, for example, the vision of horror in “Es wenden die Herrscher / Ihr segnendes Auge / Von ganzen Geschlechtern …” – “The rulers turn / their beneficent eyes / away from whole races ...” with a sense of consolation simply by turning to the major tonality.

Between 1888 and 1893 the sculptor and painter Max Klinger (1857–1920) created his graphic chef d’œuvre, the cycle of Brahms Fantasies op. XII. They were printed in Leipzig in 1894 in an edition of 150 copies as a belated 60th birthday present to the composer. A portion of the work is dedicated to the Schicksalslied op. 54. Both Klinger and Brahms were heavily influenced by the philosophy of Arthur Schopenhauer, according to which “the in-itself of life, the will, existence itself, is a constant sorrow, partly miserable, partly terrible!”

Like the Gesang der Parzen, the Schicksalslied is also a song of reminiscence. Friedrich Hölderlin inserted the poem at the end of his novel Hyperion. The protagonist is sitting on the shore, “weary from the farewell”, reflecting on the “days of sorrow”, looking quietly at the sea. At this moment, he recalls the song that his companion Adamas once sang to him “in the foolish happiness of youth”.

From the very outset Brahms saw the problem inherent in creating a conclusion for his setting. It should not end with the text’s desolate fall “into the unknown” but rather with “something that the poet doesn’t say”. Brahms hit on a brilliant solution, although one that contravenes the rules of choral music in his time by ending the work in a different key from that of its opening. Eduard Hanslick, the stringent Viennese critic and friend of the composer, described the extraordinary nature of the work’s conclusion as follows: “It is an extremely beautiful poetic twist, revealing the full transfiguring power of music, that after the chorus’s final words Brahms returns to the solemn slow pace of the opening and, in an extended orchestral postlude, dissolves the torment and tribulation of human existence into blissful serenity.”

In 1902, Arnold Schoenberg – who would later deliver his lecture “Brahms, the Progressive” on the occasion of the 100th anniversary of the composer’s birth – made the acquaintance of the already established court conductor Richard Strauss in Berlin. Strauss encouraged him to set the drama Pelléas et Mélisande by Maurice Maeterlinck (1862–1949), published ten years earlier. The unhappy love triangle of Golaud, his wife Mélisande and her lover – and Golaud’s younger half-brother – Pelléas, in which the “workings of destiny” cause the heroine’s death, immediately appealed to Schoenberg. Between July 1902 and February 1903 he composed his symphonic poem Pelleas und Melisandeop. 5, unreservedly following in the tradition of that genre as established by Liszt and Strauss.

“With the exception of just a few omissions and minor changes in the order of the scenes,” Schoenberg explained, “I tried to reflect every single detail.” The protagonists’ inner processes are reflected musically, each character being given two themes or “leitmotifs”: one for their physical presence, one for their emotional states. All of these themes are immediately subjected to alteration, reiterated and sounded in new constellations according to the principle of “developing variation” derived from Brahms. “Fate motif is transformed into storm,” reads Schoenberg’s annotation in the score. “Out of the storm emerges Golaud’s motif, followed by Melisande’s delicately lamenting one, both threatened by the Fate motif. In Melisande’s motif can be heard the Love motif. P.elleas takes M.elisande with him out of the storm.” The “leitmotifs” that Schoenberg described skilfully interact with the sequence of scenes; the menacing Fate motif, first heard right at the opening in the second bar, later spans the work from the forest scene all the way to Mélisande’s death at the end. Pelleas und Melisande marks Schoenberg’s farewell to expressive, luxuriant late Romantic orchestral sonorities.

Christian Thielemann is the designated principal conductor of the Staatskapelle Dresden and the Semperoper from autumn 2012. He has been general music director of the Munich Philharmonic Orchestra since the start of the 2004/05 season, having previously held a similar post with the Deutsche Oper in Berlin from the autumn of 1997 to the summer of 2004. He studied at the Academy of Arts in his native Berlin before gaining a thorough grounding in conducting at smaller theatres in Germany. His first major appointment was as principal conductor at the Deutsche Oper am Rhein, where he spent three seasons prior to his appointment as general music director of Nuremberg Opera. The principal pillars of Christian Thielemann’s repertory are the works of the Classical and Romantic periods – above all the music of Wagner and Strauss – as well as the music of Hans Werner Henze. In the summer of 2006 he conducted Tankred Dorst’s new production of Wagner’s Ring in Bayreuth. Since then he has built up an international reputation for himself, appearing with many of the world’s most prestigious orchestras and with opera companies throughout Europe, North America and Japan. As a guest conductor he has concentrated increasingly on a relatively small number of opera houses, most notably the Vienna State Opera and the Bayreuth and Salzburg Festivals, while at the same time limiting his concert appearances to a select group of world-class orchestras, i.e. the Vienna Philharmonic, the Berliner Philharmoniker, the Staatskapelle Dresden, the Concertgebouw Orchestra Amsterdam, the Israel Philharmonic and the Philharmonia Orchestra London. Furthermore he works regularly in the USA with the orchestras in New York, Philadelphia and Chicago. Christian Thielemann first appeared with the Berliner Philharmoniker in 1996 and has returned many times since then, most recently in mid-December 2008, when he conducted Anton Bruckner’s Symphony No. 8

Its flexibility, immaculate intonation, flawless articulation and warm, richly hued sound make the Rundfunkchor Berlin one of the most sought-after ensembles among international orchestras and conductors. Initially founded in Berlin in 1925 for broadcast recordings, the choir has taken part in premiere performances under conductors such as Szell, Scherchen, Klemperer and Kleiber. Dietrich Knothe (1982 – 1993) shaped the choir into an instrument of precision for the most demanding pieces, and Robin Gritton (1994 – 2001) enriched the choir’s palette of colours as well as internationalizing its repertoire. The Rundfunkchor Berlin has been under the direction of Simon Halsey since 2001. Precision and a subtle combination of tone colours are the hallmarks of his direction. The series „Broadening the Scope of Choral Music“, which reaches across disciplines to integrate the arts as a whole, began with Rodion Shchedrin’s Der versiegelte Engel (2005). In cooperation with various artists, Halsey breaks out of the classical concert choir mold and opens up to a new public an original way of experiencing choral music. Within the field of education, Halsey encourages the exchange of ideas between professional and amateur singers. He has invested in singalong concerts since 2003, followed by formats tailored especially to public leaders and to youth. The Rundfunkchor Berlin works in close partnership with the Berliner Philharmoniker. Together, the two ensembles won a Grammy Award in the category of „Best Choral Performance“ for Brahms’ German Requiem (2008) and Stravinsky’s Symphony of Psalms (2009). The choir also works regularly with the Rundfunk-Sinfonieorchester Berlin and the Deutsches Symphonie-Orchester Berlin.

A Verdi evening with Christian Thielemann

Peter Eötvös conducts the premiere of his Cello Concerto Grosso