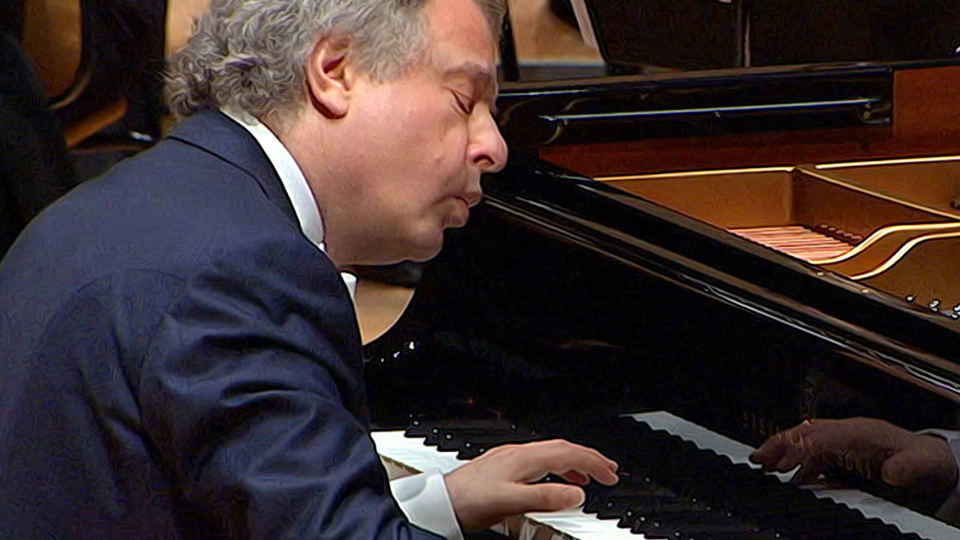 András Schiff is a pianist with a clearly circumscribed repertoire. Liszt, Rachmaninov, Ravel – he never plays a single note by any of them. By his own admission, he is only interested in composers whom he recognises as having a connection to music by Bach – such as Mozart and Haydn, both of whom feature in this programme for his guest appearance in this concert with the Berliner Philharmoniker. And for this concert, Bach himself, of course, could not be omitted.

In this recording, Schiff appears on the platform as both pianist and conductor – just as Baroque and Classical composers of the day once directed their concertos from the keyboard. The evening opens with Bach’s Piano Concerto No. 1 in D minor, a work which the Berliner Philharmoniker had not performed for over half a century – or, to be more precise, not since the legendary performance with Glenn Gould and Herbert von Karajan in 1958.

Schiff meaningfully couples this work of Bach’s with Mozart’s Piano Concerto No. 20, which is also in D minor and already foreshadows with its sombre emotion the Romantic piano concertos of the 19th century. A not dissimilar world of expression is evoked in the demonic Don Giovanni overture as well as in Haydn’s Military Symphony, in which latter work the composer succeeds in making tangible the depths and horrors of war – powerful evidence to refute Haydn’s widely assumed blandness.

Music for new audiences by Bach, Haydn and Mozart

When Johann Sebastian Bach referred to a “clavier”, he did not mean the instrument we now associate with the piano. “Clavier” in his day could refer to any and all strung keyboard instruments – as indicated by the word’s derivation from the Middle Latin “clavis” (key). Clavichord, spinet, virginal and fortepiano were all grouped under this rubric. And Bach went a step farther by extending it to organ terminology: he composed Part III of his Clavierübung for that instrument, though its sound is produced by pipes and not strings.

It’s possible that Bach, who acquired a fortepiano in the 1740s, late in his life, would have enjoyed hearing his “clavier” concertos played on a modern concert grand. But the instrument he wrote them for was the harpsichord, which he liberated from its shadowy existence as a continuo instrument and brought out into the open as a soloist interacting with the orchestra. His venue for this pioneering endeavour was an eating establishment. In 1720, Bach the Thomaskantor assumed the directorship of Leipzig’s Collegium Musicum, performing with them every Friday evening in the rooms of Gottfried Zimmermann’s coffee house. There he was able to cultivate a different repertoire from that of St. Thomas’s Church, performing his own and other composers’ concerti grossi, overtures, solo concertos and chamber music. It wasn’t always possible for a very busy musician like Bach to compose new works for every concert at Zimmermann’s, and often he would rework older scores for a different complement of instruments.

The “Clavier” Concerto in D minor, BWV 1052 has its origin in a violin concerto from Bach’s time at Weimar. Its first movement, marked by driving rhythms, begins with a weighty, unison tutti, which recurs four times as ritornello. In between, Bach spins out extended toccata-like passages dominated by the solo instrument. The sombre slow movement follows the model of an arioso: the orchestra presents a chaconne-like theme, above which the right hand unfolds a broad, anguished cantilena. The finale returns to the sound and formal design of the opening, but now the ritornello and solo passages alternate in considerably quicker succession, while the anapaestic basic rhythm generates a singular élan and forward momentum.

A self-described “bonded servant”, Joseph Haydn advanced in his capacity as Kapellmeister at the court of Prince Esterházy to become a pioneer in the history of music. At the secluded Hungarian castle of Eszterháza, he virtually created entire new genres and established compositional principles that would retain their validity over many generations. One of those genres was the Classical symphony with its four-movement layout. In his “isolation” Haydn was for many years unaware of his celebrity status in the musical world: the printing and sales of his works throughout Europe amounted to a lucrative business (from which the unwitting composer himself failed to profit). Haydn finally reaped the fruits of his fame when in 1790 he accepted the invitation of the impresario Johann Peter Salomon and set off for London. It was the first big journey of his life. “How sweet is the taste of a certain freedom”, he confided in a letter, while enjoying the admiration that inundated him in the English capital.

The twelve “London Symphonies” are the most significant artistic legacy of Haydn’s visits to England. He completed the Symphony in G major Hob. I:100, whose nickname “Military” Symphony he authorised, during his second stay in 1794 – 95. The two inner movements were created while he was still in Vienna, but he wrote the opening movement and finale after his arrival in London, in time for the work’s premiere on his 62nd birthday, 31 March 1794, in the Hanover Square Rooms.

The symphony begins with a slow introduction which seems to evoke an idealised Arcadian landscape. The clear atmosphere soon becomes tonally clouded before yielding to high wind instruments intoning the main theme. These disruptions are then taken to an extreme in the second movement: again Haydn at first strikes up a pastoral, serenade-like tone, then abruptly, on its repetition in minor, rigs out the seemingly peaceful melody with triangle, cymbals and bass drum – the instruments of Janissary battle music – before finally celebrating with the timpani roll and whip-crack of a Turkish march. A similar stroke is employed in the finale, whose rondo theme in the English style – a nod to his audience – soon appeared in collections of country dances.

Wolfgang Amadeus Mozart was one of the first composers in music history to take the plunge into the uncertain existence of a free-lance artist. On 8 June 1781 he was released from his detested service to the Salzburg Prince-Archbishop Colloredo and moved to Vienna. Success came quickly: Mozart was in demand as composer, virtuoso and highly paid piano teacher. Soon he was even putting on his own lucrative “academy” concerts, 90 per cent of whose subscribers were aristocrats and financial barons.

He had arguably reached the pinnacle of his fame when Mozart presented six subscription concerts on successive Fridays during the Lenten season of 1785 at the Mehlgrube, an eating and gaming establishment on the Neuer Markt. His father Leopold, who was visiting Vienna during this time, witnessed with astonishment the Mozart “hype” that had seized the Danube metropolis’s musical scene. It was also at this time that Joseph Haydn uttered his famous words to Leopold: “Before God and as an honest man I tell you that your son is the greatest composer known to me either in person or by name: He has taste and, furthermore, the most profound knowledge of composition.”

It was at the first of his six “academies”, on 10 February 1785, that Mozart gave the premiere of his Piano Concerto in D minor, K.466. This was a ground-breaking work, and not only because of being his first concerto in a minor key. Another conspicuous feature is the symphonic layout of the score, calling for a large orchestra with trumpets and timpani, whose role is by no means confined to preludes, interludes and supporting accompaniment. Instead it inhabits its own thematic space and never takes over the piano’s central ideas. As a result, there is an extreme demarcation between tutti and solo, which co-exist in virtually irreconcilable opposition – it is not the dialectical principle of synthesis that governs this movement, but rather pronounced, rugged contrast. Mozart also succeeds in integrating strikingly theatrical moments, such as the grumbling turbulence of the opening movement, the aria-like lyricism of the Romance, and the “lieto fine” in the coda of the finale, which, as though with a nonchalant hand gesture, dismisses the pessimism that has dominated the music until now and brings it to a light-hearted conclusion.

András Schiff was born in 1953 and studied with Pál Kadosa, György Kurtág and Ferenc Rados at the Franz Liszt Academy in his native Budapest. He later studied in London with George Malcolm. Central to his career are solo recitals and, more especially, cycles of concerts featuring the keyboard works of Bach, Haydn, Mozart, Beethoven, Schubert, Chopin, Schumann and Bartók. He also appears all over the world with leading orchestras and conductors. In 1999 he formed his own chamber orchestra, the Cappella Andrea Barca, which he conducts from the keyboard. He has been a passionate chamber musician since his early youth and in this capacity he helped to establish the Whitsuntide Concerts at the former Carthusian monastery at Ittingen in Switzerland. Since 1998 he has run the Omaggio a Palladio concerts at the Teatro Olimpico in Vicenza. Between 2004 and 2007 he was “artist in residence” at the Weimar Festival. András Schiff has received numerous awards for his services to the arts. In 1996, for example, he received the Kossuth Prize, Hungary’s highest award. And in 2006 the Beethoven House in Bonn elected him an honorary member in recognition of his exceptional status as an interpreter of Beethoven’s music. More recently, in June 2009, he was honoured by the Ruhr Piano Festival. He holds honorary professorships at the Academies of Music in Budapest, Detmold and Munich. He first appeared with the Berliner Philharmoniker in 1989 and has returned on frequent occasions since then. In 2007/8 he was the Foundation’s Pianist in Residence. During the current season he is also giving three concerts as part of the series “Schiff spielt Bach”, the most recent of which took place in January 2010. Next season he will continue this series of concerts with three more keyboard recitals.