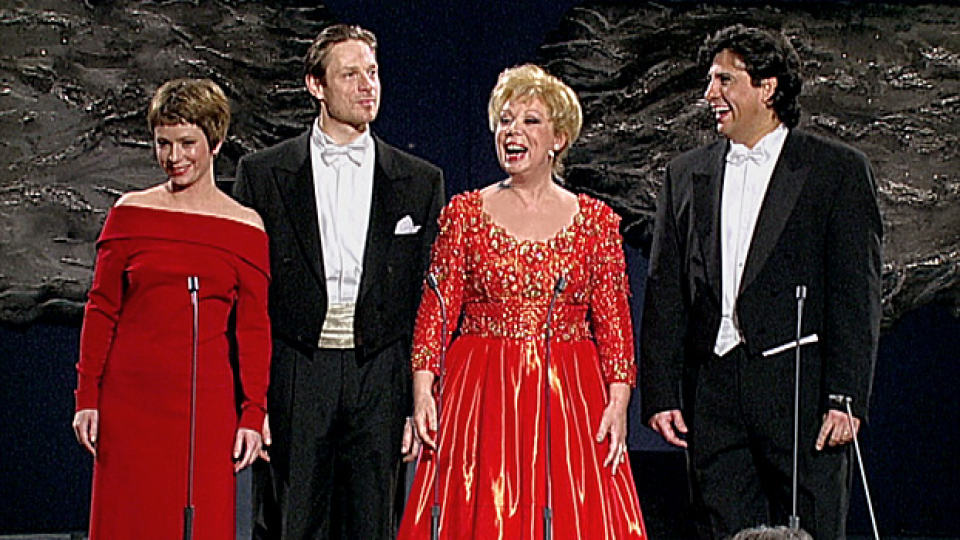 Songs of Love and Desire was how the Berliner Philharmoniker and Claudio Abbado subtitled their New Year’s Eve Concert from 1998. The various ways these powerful human emotions manifest themselves was to be heard in famous arias and scenes by Mozart, Verdi and Tchaikovsky. The soloists were Christine Schäfer, Simon Keenlyside and Marcelo Àlvarez, three of the best opera singers of the younger generation. They were joined towards the end of the evening by a prima donna assoluta of the 20th century: Mirella Freni.

The singers impressed not only through vocal splendour, but also by their dramatic versatility. Christine Schäfer perfectly conveyed the subtle differences between the genuine desire of Gilda in Verdi’s Rigoletto, the feigned love of Susanna in Mozart’s Figaro and the timid, doubting affection of Zerlina in Don Giovanni. Male passion, in turn, is shown in this concert from its more dubious side, with Simon Keenlyside portraying a Don Giovanni who constantly changes between charm and lasciviousness. On the other hand, Marcelo Àlvarez as the Duke in Rigoletto pursues his conquests with a gentle, but no less insidious seductiveness.

And finally, the appearance of Mirella Freni, whose connection with the Berliner Philharmoniker goes back to 1972, when she collaborated with Herbert von Karajan on the legendary recording of La bohème. With great vividness and musicality, she performed the letter scene from Tchaikovsky’s Eugene Onegin as a miniature drama in which doubt, determination and unconditional love struggle for supremacy.