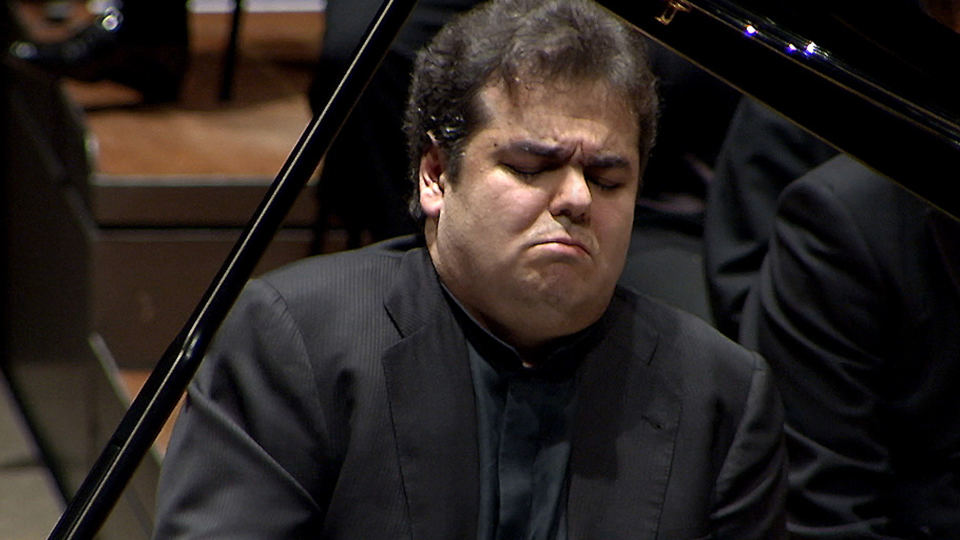 Tchaikovsky’s First Piano Concerto is a work which happily combines enormous popularity with rich musical substance. Hans von Bülow, the soloist for the first performance in 1875 and later chief conductor of the Berliner Philharmoniker said, “There is such unsurpassed originality, such nobility, such strength, and there are so many arresting moments throughout this unique conception; there is such a maturity of form, such style in its design and execution.” In this recording from December 2010, the Berliner Philharmoniker and Neeme Järvi perform the work with the Russian pianist Arcadi Volodos.

Volodos first caused a sensation with a solo CD of breakneck virtuosity in 1997. His first recording with an orchestra followed three years later: his debut with the Berliner Philharmoniker, performing Rachmaninov’s Piano Concerto No. 3. The English magazine Gramophone found his interpretation to be “coolly masterful,” and that, “in his sky-rocketing launch of the finale there is no mistaking the authenticity of his virtuoso thunder. ... Volodos’s mastery both technically and musically will take the wind out of the sails of even the most formidable pianists.”

In addition to the Tchaikovsky concerto, there are two other lesser-known Russian works in this recording which both pick up on western models and which are both performed here for the first time by the Berliner Philharmoniker. Firstly, there is a dance suite from Nikolai Rimsky-Korsakov’s opera-ballet Mlada, where the clear echoes of a St Petersburg production of Wagner’s Ring des Nibelungen can be heard. The second half of the concert consists of Sergei Taneyev’s Fourth Symphony. Taneyev, a student of Tchaikovsky, was a passionate disciple of Baroque counterpoint. As a result, the second movement of his Fourth Symphony, for example, sounds almost like a collaboration with George Frideric Handel.

Works by the Russian composers Taneyev, Rimsky-Korsakov and Tchaikovsky

Still seriously underdeveloped in Beethoven’s day, Russian musical life took several simultaneous quantum leaps into the future beginning around 1860. Even from today’s perspective, there seems to have been a hiatus, a kind of symphonic interregnum, between the generation of Tchaikovsky (born in 1840) and that of Scriabin and Rachmaninov (before in 1872 and 1873, respectively). But this exists only in the international repertoire; in Russia itself the gap has always been bridged by two important late Romantic symphonists: Alexander Glazunov and Sergei Taneyev. In the West only Glazunov’s Violin Concerto has managed to find a place in the repertoire, but the situation is beginning to change even here: in recent years there have been repeated performances of chamber music by Taneyev as well as his Symphony No. 4 in C minor op. 12. This evening the Fourth Symphony is receiving its Berlin Philharmonic premiere.

The work, completed in 1898, was published by Belaieff in Leipzig in 1901 as No. 1 but is actually Taneyev’s fourth and last symphony. It displays an extraordinary balance between inspiration and structural mastery. Taneyev went to elaborate lengths to explore the contrapuntal possibilities of his themes before beginning actual composition, but in the Fourth he succeeded to an astonishing degree in erasing every trace of this abstract process. It isn’t necessary to know the thematic relationships in detail in order to appreciate the work. Although the main motif, which overwhelms the listener with its driving energy, informs several themes in the first and last movements – there are also veiled relationships between the inner movements and between the inner and outer movements – this music makes its effect primarily through the distinctive profile of its themes and the intoxicating, almost hypnotic manner in which they are handled.

Taneyev has more to offer than his notorious craggy tone: no less striking are the Allegro molto’s waltz theme, recalling Tchaikovsky, and the broad lyricism of the Adagio, the symphony’s longest movement. The scherzo conveys something of the composer’s quirkiness – he also wrote songs on Esperanto texts and little symphonies for toy instruments. However wilful Taneyev, a voracious reader of Spinoza, may have been, however much the final movement’s thrilling assault may even herald “the victory of strict thinking over the temptations of feeling”, as was so often stressed after the revolutionary year 1917, this victory is preceded by one of the most passionate struggles in all of Russian music.

Although Nikolai Rimsky-Korsakov was the first member of the group of composers known as the “Mighty Handful” to undertake a serious study of music and even became a conservatory professor, he never overcame a certain deficiency in his command of form. His three symphonies exhibit a preference for the rhapsodic over Classical structural models. Not surprisingly, the dominant genre in his œuvre is opera, in which he shows himself to be a tireless, versatile innovator. The fairytale ballet-opera Mlada began life as a collaboration between Rimsky-Korsakov, Léon Minkus, Alexander Borodin, César Cui and Modest Mussorgsky. The project was abandoned, but 20 years later, in 1889/90, Rimsky composed an opera of his own on the same libretto. Though Mlada was not a public success, it made a lasting impression on the young Igor Stravinsky.

The Mlada Suite for orchestra gives only a very rough idea of the opera’s action. The Introduction evokes a mythical heathen Russia, while in the suite’s finale we hear the procession music from Act II. The three inner movements are taken from a dramaturgically extraneous dream sequence at the court of Cleopatra. The hybrid genre of Mlada, half ballet and half opera, was constantly criticised, but the first performance in Russia of the Ring, given in St. Petersburg in 1889, represented a turning point in the country’s music history. The heavily armoured Wagnerian orchestration of Mlada led even Taneyev to undertake a close study of Wagner’s scores – and to allow himself to utter positive words about them in private, though officially remaining a Wagner detractor.

Apart from his compositions, writings and 28 years of teaching at the Moscow Conservatory, Taneyev’s significance in Russian musical life was as a gifted pianist. He was only ten when Nikolai Rubinstein accepted him as a student at the newly founded conservatory, where his teacher for harmony, orchestration and composition was Pyotr Ilyich Tchaikovsky. A close friendship quickly developed between the two, one aspect of which was a freedom to criticise each other’s works without mercy. Taneyev was among the few who found Tchaikovsky’s Piano Concerto No. 1 in B flat minor op. 23 acceptable, and in December 1875 he was soloist in the Moscow premiere. Hans von Bülow had played the world premiere two months earlier in Boston after the original dedicatee, Nikolai Rubinstein, rejected the concerto as “completely unplayable, trivial, vulgar” – which didn’t prevent Tchaikovsky from submitting the manuscript for printing without making a single change (though he did subsequently revise it). The autograph score contains a dedication to Taneyev which has been eradicated in favour of one to the renowned Bülow. The work’s conquest of the concert halls of the world really began in 1878 when a repentant Rubinstein created a sensation with it at the Paris Exposition Universelle.

Its wide popularity notwithstanding, the concerto is by no means conventional in its structure, harmony or sonorities. The horn opening of the first movement is in the home key of B flat minor, but the introduction then modulates immediately to D flat major and the movement ends in B flat major. The famous introductory motif in D flat, whose appearance on the strings is vehemently countered by piano chords leaping wildly across the entire keyboard, is intensified by furious redoubled chords and octaves when it is taken up by the solo instrument. The main theme of the movement is derived from a Ukrainian folksong that Tchaikovsky heard rendered by a blind street-singer near Kiev; the secondary themes occupy a major role in the development and, eventually, the cadenza.

The complexity of this Allegro non troppo e molto maestoso led over time to its being subject to frequent alterations and cuts – by countless pianists and even Tchaikovsky himself. The second and third movements have proved less provocative. In the lovely Andantino semplice, Tchaikovsky incorporates the French cabaret song “Il faut s’amuser, danser et rire”, while the Allegro con fuoco rondo-finale again makes use of a Ukrainian folksong for its principle theme.

Taneyev’s intimate familiarity with his teacher’s style and the privilege of uninhibited criticism also had some less auspicious consequences. After Tchaikovsky’s death, Taneyev took it upon himself to publish his friend’s Piano Concerto No. 3 in E flat major with his own reconstruction of the composer’s provisional slow movement and finale. Taneyev generally felt that Tchaikovsky composed too quickly and carelessly, while Tchaikovsky feared that Taneyev’s creative flame might be suffocated under an excess of academic rigour. Both were wrong. In Russia the two of them have long been regarded as masters and, perhaps soon, Taneyev will also be seen as such in the West.

Arcadi Volodos was born in 1972 in Leningrad (now St. Petersburg). There he first studied singing and conducting before devoting himself seriously to the piano in 1987. He continued his studies at the conservatories in Moscow, Paris and Madrid. Since his New York debut in 1996, the pianist has performed with many of the world’s best orchestras (e.g. the Israel Philharmonic Orchestra, the Royal Concertgebouw Orchestra in Amsterdam, the London Philharmonic Orchestra, the Tonhalle-Orchestra Zurich, the New York Philharmonic Orchestra, and with the Boston, Chicago and San Francisco Symphony Orchestras) as well as with conductors such as Vladimir Ashkenazy, Riccardo Chailly, Valery Gergiev, James Levine, Zubin Mehta and Seiji Ozawa. He has also performed many solo piano recitals in, for example, in New York, Paris, Amsterdam and at the Philharmonie in Berlin. Since 2002, the multi-award winning artist has also made regular appearances at the Salzburg Festival. Arcadi Volodos has performed on many occasions with the Berliner Philharmoniker since his debut in 1997, most recently in October 2005 in a series of three concerts under the direction of Markus Stenz as the soloist in Sergei Prokofiev’s Piano Concerto No. 2 in G minor op. 16.

The Berlin Baroque Soloists with an Anglo-Italian evening

Plácido Domingo conducts a Spanish Night at the Waldbühne