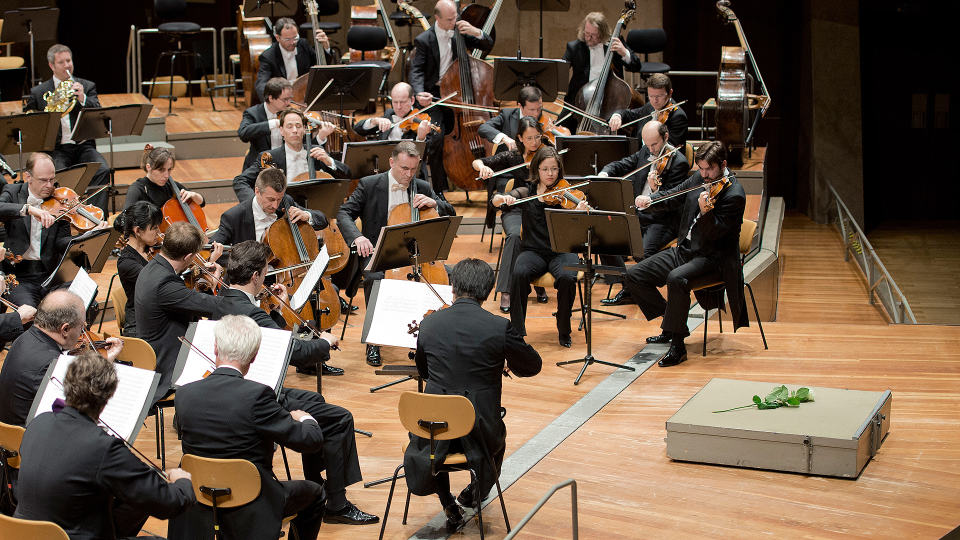 In this concert from May 2014, the Berliner Philharmoniker remember their former chief conductor Claudio Abbado who died 4 months earlier on 20 January. In remembrance of this sad loss, Frank Peter Zimmermann plays Wolfgang Amadeus Mozart’s Violin Concerto in G major without conductor. In the second part of the concert, Sir Simon Rattle performs Bruckner’s Symphony No. 7.

On and Off the Track in Vienna

Is there a specifically Austrian music, a line of tradition that links Mozart to Mahler? The conductor, critic and opera administrator Paul Bekker thought so and attracted widespread attention with his theory of the symphony’s development in the 19th century. He distinguished between three principal lines: the central-European Romantic (Mendelssohn, Schumann, Brahms and their academic epigones), the programmatic (Berlioz and Liszt) and, lastly, the Austrian. “Franz Schubert is its herald,” wrote Bekker of the Austrian symphony in 1921, “Anton Bruckner its strongest elemental force, and Gustav Mahler its accomplisher.” Bekker’s ideas still offer interesting material for discussion, not least because, of all composers, it is the three Viennese Classics – Haydn, Mozart and Beethoven – who cannot be forced into this framework.

The long list of works written by Mozart before 1781 includes five violin concertos produced within the shortest span of time. The G major (K. 216) was once overshadowed by his two contributions to the genre that directly followed it. It was the musicologist Alfred Einstein who first recognized the creative leap the G major Concerto signified: “Nothing is more miraculous in Mozart’s work,” he wrote in his classic 1945 book on Mozart, “than the appearance of this concerto at this stage of his development.” He related this miracle to the work’s thematic richness, the newly intimate relationship between the orchestra and the solo part, and to an originality eschewing everything conventional and virtuosically formulaic. The piece’s popularity rests on the Adagio’s Elysian inwardness, though of a sort one also finds occasionally in the serenades and divertimenti. And the folk-like character of the rondo finale is also hardly a rarity. Contrary to widely held prejudices, Mozart did not despise folk music: there is sufficient evidence of that in many of the early serenades as well as in dozens of minuets and German dances from the last years of his life.

Mozart’s violin concertos were not particularly successful at first. A Viennese publisher’s catalogue of 1799 indicates that only one of them was available for purchase at the time. The situation improved quickly once Breitkopf & Härtel began a supposedly complete edition of his works in 1798, but in many areas Mozart remained in the shadow of Haydn and Beethoven. It was principally the symphonies of Haydn that the young Franz Schubert got to know as a violinist in the student orchestra of Vienna’s city college and in various amateur orchestras. Schubert’s own early symphonies thus betray no Mozartian influence, with the exception of the Fifth, whose minuet in G minor recalls the older composer’s Symphony No. 40 in the same key. Instead Schubert finds his own individual voice, which also has little in common with that of his idol Beethoven. The vague similarities that do exist are to be found in mood and expression.

Rosamunde, Fürstin von Zypern (“Rosamund, Princess of Cyprus), music for a Romantic Zauberspiel (magic play) with an exotic setting, proved to be Schubert’s last completed work for the stage. Written within five days, these pieces were premiered at the Theater an der Wien on 20 December 1823. It was one of Schubert’s greatest public successes, although the play itself was a failure and repeated only once owing to the weakness of the poet Helmina von Chézy’s text. Schubert had had no time to compose an overture and so he recycled an earlier one, from his opera Alfonso und Estrella. In a later, piano version of the instrumental music, he used the overture to his opera Die Zauberharfe. Along with the charming ballet music and the entr’acte after Act III, it became one of the enduringly popular numbers from a creation that proved unviable in its entirety. Schubert seems to have been especially fond of this entr’acte’s gentle, melancholy melody: he also used it in the Andante of his A minor String Quartet, sometimes known as the “Rosamunde” Quartet, and, lightly varied, in the Impromptu in B flat, D 935 No. 3.

As hard as it is to grasp an affinity between Mozart and Schubert, it is easy to perceive what Schubert’s music has in common with that of Anton Bruckner. This is not to be explained as a “feeling for nature and home”. Indeed the expression “Austrian symphony” makes little sense – there were none written in Vorarlberg or Carinthia. If one really wants to adopt the regional principle as a musicological category, then it is necessary to specify “Viennese symphony”. There are, in fact, many of Schubert’s stylistic features that recur in Bruckner: the bold harmonies; the lengthy themes; the expanded dimensions of movements, sometimes resulting from the presence of three thematic groups (as opposed to the Classical sonata form’s use of two); the huge and frequent general pauses; and, not least, the rustic ländler-like tone in scherzo movements.

The first movement (Allegro moderato) begins with the longest theme ever conceived by Bruckner: 21 bars combining, as it were, the famous “heavenly length” of the “Great C major” Symphony with the “endless melody” of Wagner. Following the repetition of the main theme by the full orchestra, though initially still without trumpets and trombones, the oboe introduces the second theme. It appears without a transition and later is heard as lyrical wind writing over pizzicato strings. This thematic group leads to a powerful monotone brass outburst. Then, again without transition, the strings give out the third theme, rather unprepossessing but important for the rhythmic profile of the largely lyrical opening movement. The development section works with these three themes, and the recapitulation, which normally repeats the main motivic ideas, also continues to vary them. The coda, which closes the movement triumphantly, represents one of the most powerful crescendos composed to date.

The Adagio became famous as a memorial to Richard Wagner. Bruckner here uses “Wagner tubas” for the first time, and the solemn musical transfiguration that ends the movement was reportedly created under the impression made by the news of Wagner’s death. Nevertheless, in the transition from the exposition to the development section, the strings present at length an unmistakably “Viennese”-sounding melody in ¾ time.

The Scherzo, written down before the Adagio, was heard by some contemporaries as a “ride of the Valkyries”. In any event, Bruckner’s one and only use of the tempo heading “sehr schnell” (very fast) gives it a special place in his entire output. The waltz-like Trio section only appears naive and harmless; it is marked “etwas ruhiger” (somewhat calmer) – in other words, not to be performed in a leisurely fashion – while retaining the Scherzo section’s blustering rhythm on the timpani. The Finale bursts in with a considerably speeded-up version of the first movement’s principal theme. This is followed by a contemplative, chorale-like second theme over striding pizzicato low strings. In this finale, Bruckner arrives at a formal solution differing sharply from his previous symphonies, one whose originality resides in its variation of individual themes from the first two movements as well as in its brevity. No other finale of Bruckner’s is so concise and yet so structurally multifarious – another reason why the Seventh Symphony won over its first audiences in Leipzig, Munich and Vienna.

Frank Peter Zimmermann was born in Duisburg in 1965 and was only five when he had his first violin lessons. By the age of ten he had made his debut performing one of Mozart’s violin concertos, and two years later he won a first prize at the “Jugend musiziert” Competition. After studying with Valery Gradov, Saschko Gawriloff and Herman Krebbers, he began his international career in 1983 and quickly rose to the very top of his profession. He now appears as a soloist with all the world’s leading orchestras and with all its most eminent conductors. He has given the first performances of three new violin concertos: Matthias Pintscher’s en sourdine, which he performed with the Berliner Philharmoniker under Peter Eötvös in 2003; Brett Dean’s The Lost Art of Letter Writing, which he premiered with the Amsterdam Concertgebouw in 2007 under the direction of the composer; and Augusta Read Thomas’s Juggler in Paradise, which he introduced to Paris audiences in January 2009 with the Orchestre Philharmonique de Radio France under the direction of Andrey Boreyko. Among Frank Peter Zimmermann’s chamber partners are the pianists Piotr Anderszewski, Enrico Pace and Emanuel Ax; with the violist Antoine Tamestit and the cellist Christian Poltéra he founded the Trio Zimmermann in 2007, together they have appeared at the festivals in Salzburg, Edinburgh, the Schleswig-Holstein Musik Festival and the Rheingau Musik Festival. Among the awards that the violinist has received are the 1994 Rhineland Music Prize and the 2002 Music Prize of the City of Duisburg. In 2008 he was awarded the Officer’s Cross of the Federal German Order of Merit. Frank Peter Zimmermann made his debut with the Berliner Philharmoniker in 1985 and since then has returned on numerous occasions; most recently he was heard in April 2013, when he performed Paul Hindemith’s Violin Concerto, conducted by Paavo Järvi. He plays a 1711 Stradivarius that once belonged to Fritz Kreisler and that has been placed at his disposal by the Portigon AG.

Murray Perahia with works by Mozart and Schubert