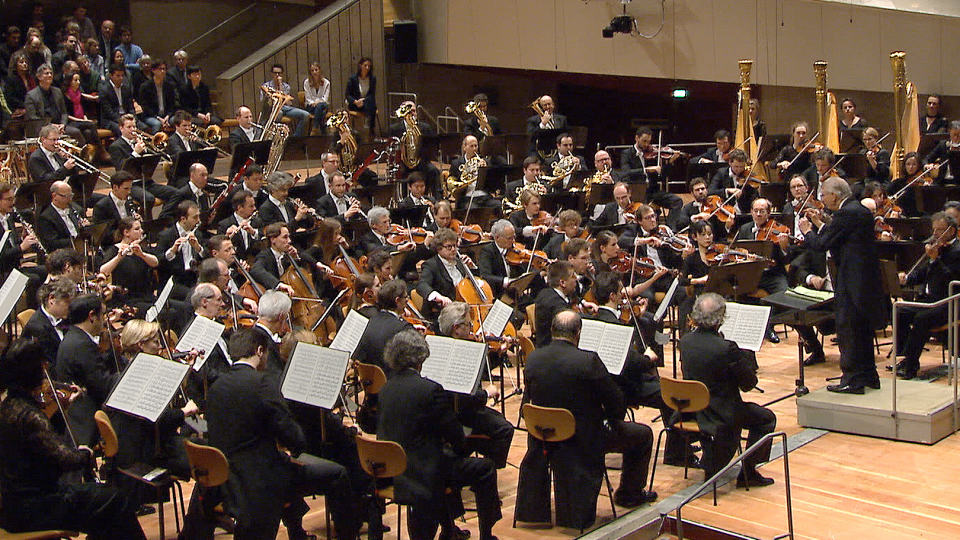 Herbert Blomstedt’s Bruckner interpretations are exceptionally transparent and rich in detail. In addition, the Swedish maestro’s reading feels very direct when, after long arcs, he leads the music to its climaxes with targeted power. “Like no other composer,” says Blomstedt, “Bruckner was able to depict the endlessness of time and space in music” – with monumental symphonies that demand a great deal from orchestra and conductor: “Bruckner’s crescendi,” the conductor continues, “are famous. The long escalations sometimes go for several minutes. Right from the outset you need to know where the goal is. The tension can never let up when covering this distance, nor can you increase emotion, volume and intensity too early. When structuring Bruckner’s music, it’s necessary always to keep something in reserve. To do that you need patience, not a very prevalent quality in our day …”

No doubt about it: Particularly in Bruckner the strength lies in economically building up arcs of suspense and in a targeted use of available resources; when the accumulated energy then breaks loose with all its might, his music has an almost overwhelming effect. With his Eighth, which begins with the dusky sound of soft horn calls and string tremolos, Blomstedt programmed the most monumental Bruckner symphony – a work that juts out of the music landscape of the 19th century like an erratic block: “The symphony is the creation of a giant, and in spiritual dimension, prolificacy and volume, it towers above all other symphonies written by the master.” (Hugo Wolf)

A Mystery Play of Heavenly Length

Anton Bruckner’s Eighth Symphony in the version by Robert Haas

The master was overjoyed. For a brief moment he could dream that he and his music were finally understood, that he might even find a niche in that select Olympian club he had until now only gazed upwards at reverentially – in particular, at Richard Wagner, whom he admired exorbitantly, to the point of deification. Yet the feeling of fulfilment awakened within him after the premiere of his Seventh Symphony on 30 December 1884, given by the Leipzig Gewandhaus Orchestra under Arthur Nikisch, was short-lived. Though he worked on it for three years, Anton Bruckner’s next symphonic work proved a veritable disaster. Hermann Levi, whom he had intended for its premiere in 1887, politely declined to conduct the symphony. Levi was confounded by the work, dedicated by the composer to his emperor, Franz Joseph I. The refusal devastated Bruckner but also motivated him. Though he fell into a severe depression, deeper and more lingering than any of his earlier breakdowns, it did not deter him from energetically and extensively revising the new opus, as he had done previously with his first four symphonies and his Sixth.

No other of his works did Bruckner rework so thoroughly and meticulously as this C minor symphony. Only a few bars withstood the composer’s critical reflection and redaction, but his changes were directed less at revising the thematic substance than at refining the harmonies and, even more, the sonorities. Levi’s reservations about the instrumentation were conducive to musical cosmetic surgery which entailed tightening up the figures and forms. The most striking change was made to the ending of the first movement. In the original version, the main theme of the Allegro moderato is successively thinned out almost to inaudibility, then picks up speed again and is reinforced in a C major lieto fine apotheosis. In the revision, Bruckner dispenses with the radiant ending and saves it for the finale (Feierlich, nicht schnell – Solemnly, not fast) where, similarly to the Fifth Symphony’s conclusion, it is dramatically heightened.

Lo and behold – the renovation of the symphony was a great success. The premiere of the second version on 18 December 1892, with the Vienna Philharmonic conducted by Hans Richter, was one of the greatest triumphs of Bruckner’s life. The music critic and Brahms biographer Max Kalbeck had this to say at the time: “Of the composer’s hitherto published works, this one must undoubtedly be given pride of place. It surpasses Bruckner’s earlier efforts in clarity of form, transparency of scoring, incisiveness of expression, refinement of detail and logic of ideas – which is by no means to say that we would recommend it as a prototypical example of its genre, worthy of imitation. On the contrary, in more than one place in the work we would wish for an experienced and cold-blooded hand, equipped with a pair of editorial scissors and a censor’s red pencil, who could rein in the composer’s capricious excesses and lead his overpowering aspirations back to the reasonable dimensions of a modest talent. Some adventurous digressions, some baroque inspirations, some empty phrases and some obsessively sprawling oddities must be sacrificed for the sake of the work as a whole.”

Bruckner did not heed Kalbeck’s suggestion, but Robert Haas – who in the last century, along with Leopold Nowak, produced critical editions of Bruckner’s symphonies – did so and in 1939 presented a version of the Eighth that, if you like, took a dialectical step that led to a fortunate outcome, synthesizing thesis (version 1) and antithesis (version 2), with finely nuanced detail yet without compromising the whole, ideal conception. A further advantage in the Haas version, aside from the tonal refinement of individual passages, lies in making the compositional process visible, re-opening a kind of door to the past while accompanying Bruckner on his creative journey – from the first conception of 1884 to the precise tectonics of the C minor symphony so admired by musical Vienna in 1892.

A hint of foreboding and yearning for death

In “forms moved by sound” (the essence of music as formulated by the famous Viennese critic Eduard Hanslick, a Bruckner contemporary and detractor), the Allegro moderato – following in the tradition of works by Mozart and Beethoven in the same C minor – describes tragic, fateful and specific conflicts through which there wafts a foreboding of death, even a hint of yearning for death. What is especially interesting here is Bruckner’s subcutaneous message: the attentive listener will recognize in the principal theme’s melodic contour a striking similarity to the Dutchman’s C minor aria from the first act of Wagner’s opera Der fliegende Holländer: “Nur eine Hoffnung soll mir bleiben” (Only one hope is left to me). Bruckner couples this allusion with another: the rhythmic contour resembles that of the main theme of the first movement of Beethoven’s Ninth Symphony. And, as if that weren’t enough, at the climax of the recapitulation, the blast of unison horns and trumpets with which Bruckner invokes the “Todesverkündigung” (the “Annunciation of Death” from Wagner’s Die Walküre), Beethoven’s rhythm resounds verbatim and with implacable repetition as a force of destiny. The power of this music is so tremendous that Bruckner, for the first time, is prompted to reverse the order of the two inner movements. The symphony’s archetypal scherzo – rustic, almost tipping over into clumsiness – comes before the slow movement, as in Beethoven’s Ninth. (Bruckner decided on this transposition in 1886, i.e. before completing the first version.)

Passion and pathos dominate the mighty Adagio, marked “Feierlich langsam; doch nicht schleppend” (Solemn and slow, but not dragging). This slow movement embraces both subjective emotional depths and monumental sublimity. Above long drawn-out pedal points and halting repeated chords, intense kinetic energy amasses out of declamatory eloquence in the first thematic complex, taking the form of downward scales or upward marcato triads – an overt reminiscence of the outer movements of Bruckner’s own Seventh Symphony.

Meeting place of the Emperor, Czar and “Deutscher Michel”

Although he did not ascribe an extra-musical programme to this movement, Bruckner imagined for the monumental finale – as for the Allegro moderato and scherzo – a wondrously strange scene: “At the time our Emperor received the visit of the Czars at Olmütz; thus, strings: the Cossacks; brass: military music; trumpets: fanfares, as the Majesties meet. In closing, all themes; (odd), as in Tannhäuser in Act 2 when the King arrives; thus deutscher Michel arrives from his journey, everything is already gloriously brilliant. In the Finale there is also the death march and then (brass) transfiguration.” The goal and resolution of this pent-up musical conflict material comes in the coda. The principal themes of all the movements in magnified form are combined in a grand apotheosis in the above-mentioned gloriously brilliant C major. It almost sounds as though God has pronounced a decree and the angels in heaven have joined in singing an alleluia in honour of the Master.

Herbert Blomstedt was born in the United States to Swedish parents. After early lessons at the Stockholm Conservatory and the University of Uppsala, he studied conducting in New York, contemporary music at Darmstadt and Renaissance and Baroque music in Basel. After working as an assistant to Igor Markevitch and Leonard Bernstein, he made his professional debut as a conductor with the Stockholm Philharmonic in February 1954 and soon went on to become principal conductor of the Oslo Philharmonic, the Danish and Swedish Radio Symphony Orchestras and the Dresden Staatskapelle, where he remained from 1975 to 1985. He spent the next decade as music director of the San Francisco Symphony Orchestra, returning to Europe in 1996 as principal conductor as of the North German Radio Symphony Orchestra in Hamburg, a post he held until 1998. From 1998 to the end of the 2004/2005 season he was music director of the Leipzig Gewandhaus Orchestra. Herbert Blomstedt is now conductor laureate of the San Francisco Symphony Orchestra, the Leipzig Gewandhaus Orchestra, the Danish and Swedish Radio Symphony Orchestras and the Bamberg Symphony Orchestra, which he has conducted on a regular basis since 1982. In 2007 the Dresden Staatskapelle awarded him its Goldene Ehrennadel. Among the orchestras with whom he has appeared as a guest conductor are the Munich Philharmonic, the Bavarian Radio Symphony Orchestra, the Royal Concertgebouw Orchestra of Amsterdam, all the leading American orchestras, the Israel Philharmonic and the Vienna Philharmonic. Herbert Blomstedt made his debut with the Berliner Philharmoniker in 1976 and has returned on frequent occasions since then, most recently in February 2014, when he conducted three concerts with symphonies by Paul Hindemith and Hector Berlioz. He is a fellow of the Royal Swedish Academy of Music and holds several honorary doctorates. He was awarded the “Großes Verdienstkreuz” (Commander’s Cross of the Order of Merit) of the Federal Republic of Germany in 2003.