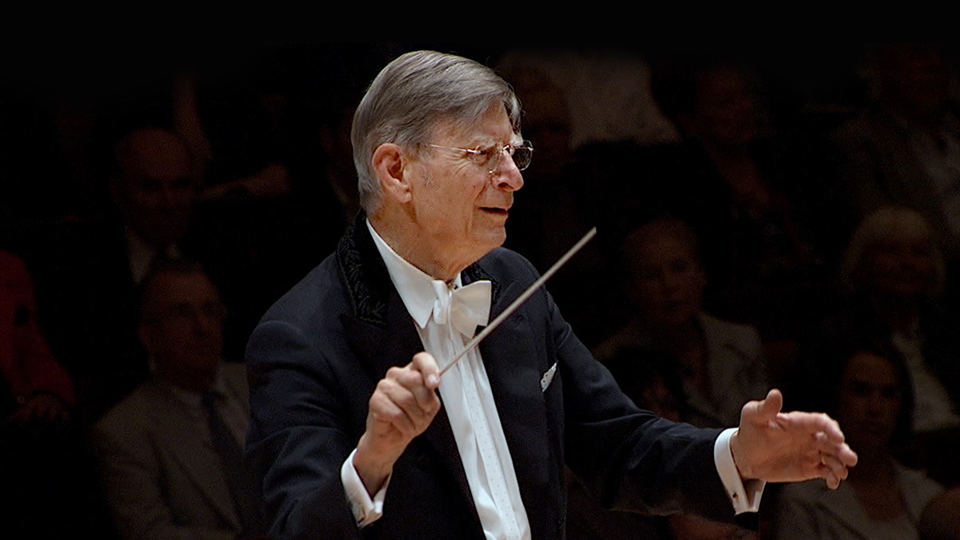 In this concert with the Berliner Philharmoniker, Herbert Blomstedt conducts two works that are undoubtedly underrated: Beethoven’s Triple Concerto and Anton Bruckner’s Sixth Symphony. The Triple Concerto was composed during one of Beethoven’s most exciting creative phases when he was finding his way towards his characteristic “heroic style”. A gloriously progressive work, but one which is not regularly performed, due to its unusual combination of soloists.

In this recording, Beethoven’s Triple Concerto gives us the opportunity to make the acquaintance of two musicians from the ranks of the orchestra in the role of soloists: 1st concertmaster Daniel Stabrawa and 1st principal cellist Ludwig Quandt. Our third soloist is the young pianist Martin Helmchen, who made his debut with the Berliner Philharmoniker this evening.

Bruckner’s Sixth Symphony is also far less performed than its neighbouring works, the Fourth, Fifth and Seventh. At this guest appearance, Herbert Blomstedt characterised the Symphony with loving respect. It is like a mountain, ”that offers wonderful views”. Just how Blomstedt’s interpretation showed the qualities of the work to their best advantage is exemplified by the review from the Tagesspiegel: “With consummate ease, he generates tension, ensuring that it does not let up for a second. And the Philharmoniker follow him spellbound, surrendering themselves to this smouldering music, with splendid brass and a string sound of truly intoxicating intensity.”

Is Ludwig van Beethoven’s Triple Concerto a problematic work? The musical public seems initially to have regarded it as such. Anton Schindler, in his biography of Beethoven published in 1840, reported that “the first performance of the Concertino for pianoforte, violin and violoncello took place in the 1808 Augarten summer concerts”. But before the Triple Concerto was heard there it had already been presented on 18 February 1808 at the Leipzig Gewandhaus. A contemporary review stated that in this work, “the composer gave freer rein than almost anywhere else to the richness – at times even luxuriance – of his imagination”. But the reproach levelled against the Triple Concerto in the Allgemeine Musikalische Zeitung of 23 June 1808 – that it “consists solely of passages that are evenly distributed between the three instruments, which in time, however, grows tiresome for both listeners and players” – would be repeated by future critics. Always excepted from this judgment, the final movement – as a critic in the Zeitung für die elegante Welt noted in 1808 – was evidently the best received of the three.

Ultimately, we are dealing here with a “piano trio in the form of a concerto” (as it was called by musicologist Harry Goldschmidt), in which Beethoven gives the cello the leading role and a partnering relationship with the violin, while the transparent piano writing tends to remain in the background. Beethoven immediately establishes this “pattern” in the first movement. After the orchestral introduction has stated the pithy main theme, the cello enters with dark, mysterious ideas which then yield to a spirited marchlike second theme. The development section features passages of brilliant scales and trills, surprising harmonic turns and exciting dialogue – among the instruments as well as between them and the orchestra – and, eventually, by a new yearning “cantabile” idea in C minor, introduced by the cello. The movement – typically for a work of Beethoven’s “heroic” period – ends triumphantly, fortissimo.

Following the lovely, euphonious A flat major Largo without a break, the dynamic Rondo alla Polacca is marked by comparatively light-hearted thematic ideas and other features characteristic of Beethoven’s “middle-period” finales. After a shift to duple metre just before the end, he takes up the original polonaise rhythm once again in triple metre and concludes the Triple Concerto with a dashing stretto.

Anton Bruckner’sSymphony No. 6 in A major is as unproblematic a work as Beethoven’s Triple Concerto is problematic. Its genesis was straightforward, compared with those of its five predecessors: Bruckner began the first movement in late summer 1879 and completed it on 27 September 1880; less than two months later, he finished the Adagio; on 17 January 1881, the Scherzo was done and, on 3 September 1881, the Finale. After that, there were no revisions, no multiple versions, no corrections – wholly untypical of Bruckner. Certain conductors were later troubled by that situation, for example Gustav Mahler, who cut and rescored the work for performance in Vienna with the Philharmonic on 26 February 1899. This was the same orchestra that had already played the two inner movements under Wilhelm Jahn on 11 February 1883 with Bruckner in attendance. He never heard his complete original composition, which was given for the first time on 14 March 1901 by the Stuttgart Court Orchestra under Wilhelm Pohlig.

In terms of formal structure, the Sixth, which Bruckner called the “cheekiest” and “boldest” of his symphonies, is barely distinguishable from its successors. The four movements are thematically related, and the first consists of three sections, clearly set off from one another yet also connected in substance. In terms of harmony, Bruckner generates a “peculiar tonal confusion” (musicologist Manfred Wagner): he migrates from A major in the opening movement – with allusions to the sacred modal idiom – to the F major of the Adagio and the A minor of the Scherzo, with C major Trio, before returning to radiant A major for the finale. The opening Maestoso’s shapely, rhythmically profiled first theme features Bruckner’s characteristic interval of the descending 5th and also establishes in the first few bars his typical rhythmic tension between duple and triple metre. This polymetre also dominates the second and third thematic complexes. But whereas the first two of these sections progress in solemn fashion, the third possesses an almost dancelike gestural character.

The heart of the Sixth Symphony is the Adagio with its wide-ranging expressive content. This is the first time in his creative output that Bruckner makes a slow movement the centre of gravity in his overall symphonic conception – not a lighter-weight genre piece but the point of departure and focal point of the entire work. The three thematic blocks are laid out in corresponding fashion, gradually increasing in expressive intensity and broadening in sonority. Joyous life-affirmation is contrasted with painful renunciation. Yet the Adagio also speaks of consolation and hope, confirming this expressive tendency at the end of the movement with a turn from minor to major. In the unusual Scherzo, which begins quietly, almost spectrally, idyllic contemplation is repeatedly broken off by an aggressive forte. The Finale, “animated, but not too fast”, behaves similarly. Formally, it resembles the first movement with its three expressively distinct thematic blocks: militant and victorious in the opening, inward and with allusions to chorale themes in the second thematic complex, and, at its close, radiantly and resplendently recalling the luminous main theme of the first movement. Bruckner’s Sixth Symphony ends triumphantly.

Martin Helmchen was born in Berlin and began to study the piano when he was six. Among his later teachers have been Galina Ivanzova at the Academy of Music Hanns Eisler in Berlin, Arie Vardi at the Academy of Music and Theatre in Hanover and William Grant Naboré at the Piano Academy on Lake Como. He won the Clara Haskil Competition in the Swiss resort of Vevey in 2001 and in 2005 received a scholarship from the Borletti-Buitoni Trust. The following year a Crédit Suisse Young Artist Award enabled him to make his debut with the Vienna Philharmonic under the direction of Valery Gergiev at the Lucerne Festival. Among the orchestras with whom Martin Helmchen has performed since then are the Stuttgart Radio Symphony Orchestra, the Bamberg Symphony, the Berlin Radio Symphony Orchestra, the German Chamber Philharmonic in Bremen, the Orchestre National de France, the Zurich Tonhalle Orchestra, the London Philharmonic and the BBC Symphony Orchestra. The conductors with whom he has appeared include Marc Albrecht, Philippe Herreweghe, Marek Janowski, Vladimir Jurowski, Yakov Kreizberg and Bruno Weil. Martin Helmchen is a welcome visitor to many of the world’s leading festivals, where he is especially noted for his love of chamber music. He appears regularly with the cellists Heinrich Schiff and Marie-Elisabeth Hecker. His other chamber music partners have included the violinists Gidon Kremer, Christian Tetzlaff and Julia Fischer, the clarinettists Sharon Kam and Sabine Meyer and the soprano Juliane Banse. His debut recital with the Stiftung Berliner Philharmoniker took place on 19 May as part of the foundation’s series of piano recitals. He is now making his debut as a soloist with the orchestra in Beethoven’s Triple Concerto.

Ludwig Quandt was born into a family of professional musicians and began to play the cello when he was six. He later studied with Arthur Troester at the Lübeck Academy of Music and attended masterclasses with Boris Pergamenschikow, Zara Nelsova, Maurice Gendron, Wolfgang Boettcher and Siegfried Palm. Among the competitions and prizes that he has won are the ARD Competition in Munich and the Premio Stradivari in Cremona. He twice took part in the Federal Republic’s Concerts for Young Artists. He joined the Berliner Philharmoniker in 1991 and has been the orchestra’s principal cellist since 1993. Alongside his orchestral work he also performs all over the world as a soloist and a chamber recitalist, not least as a member of the various ensembles associated with the Berliner Philharmoniker.

Daniel Stabrawa was born in Cracow, where he also studied the violin. After winning numerous international competitions, he became leader of the Cracow Radio Orchestra in 1979. He has been a member of the Berliner Philharmoniker since 1983 and one of its three leaders since 1986. In 1985 he and three of his colleagues formed the Philharmonia Quartet, which has appeared to tremendous acclaim not only in Berlin but also in other international centres of music and has received a large number of awards. Since 1994 Daniel Stabrawa has turned increasingly to conducting and from 1995 to 2002 was principal conductor of the Capella Bydgostiensis in Bydgoszcz (Bromberg).

Bartók and Brahms with Herbert Blomstedt and András Schiff

Kirill Petrenko conducts Beethoven and Strauss at the Berlin Palace