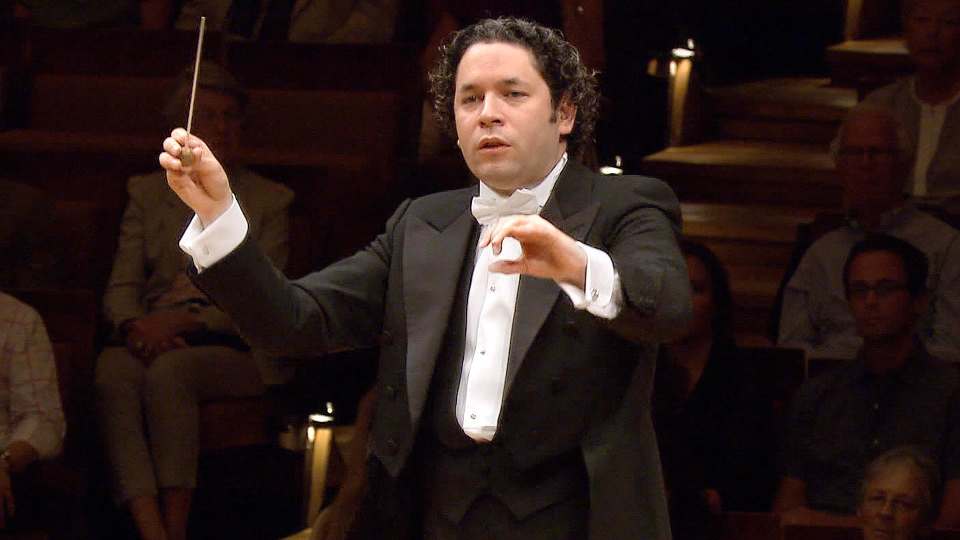 The Bamberger Symphoniker initiated the Gustav Mahler Conducting Competition in 2004, and the first winner was Gustavo Dudamel. Since then, the rising star of the international music scene, born in Venezuela in 1981, has been building a career that is without compare. Thanks to his musical temperament, his orchestral conducting expertise and his personal charm, Dudamel not only acquired a reputation in no time at all as one of the hottest conductors of the younger generation, but has also won over greats such as Sir Simon Rattle, Daniel Barenboim and Claudio Abbado to work with “his” orchestra: the Sinfónica de la Juventud Venezolana Simón Bolívar, the Venezuelan State Youth Orchestra “Simón Bolívar”.

A decade has passed since Gustavo Dudamel shone with Gustav Mahler’s Fifth Symphony at the final concert of the first Gustav Mahler Conducting Competition. Conducting the Berliner Philharmoniker, with whom Dudamel, according to the Tagesspiegel, gave the “coolest” debut of all time in 2008 at a concert at the Waldbühne, Dudamel now presents his interpretation of Mahler’s first symphony. The programme also includes Wolfgang Amadeus Mozart’s so-called Posthorn Serenade K. 320. An interesting combination, given that both Mozart and Mahler reflect folk music traditions in their compositions to transcend the limits of traditional genres.

The Sound of the World

“In the beginning was the word.” So it is written in the Bible (John 1:1), but what came before that? Essentially shakes and shocks, at worst volcanic eruptions and storms. At the outset of its (biblical) history, humanity transformed this natural trembling into a cultural object in the form of a wind instrument, the horn – in particular the ram’s horn. Thus, on the one hand, the horn is among the oldest drinking vessels; on the other, its usefulness in amplifying sound – as a kind of early megaphone – represents one of the first attempts not only to tolerate the vibrations of nature but also to transform them by means of human control. The noises made by those earliest horns – so say historians – must have filled nearby listeners with shudders like those elicited by thunder or roaring animals. But now man himself was producing this thunder, this roar and, in that respect, an archaic reply to natural trembling: a musical counterspell.

In the course of history this wondrous instrument was also considered suitable for civilian use. The horn served as a medium for messages and announcements. And so the posthorn came into the world, and there it stayed until – ostensibly – more refined means of communication were devised. Mozart was especially fascinated by the sound of the horn, as demonstrated not only in his four concertos for the instrument but also in the Serenade in D major, K. 320, which he composed in 1779 while still living in Salzburg. It was intended for the ceremony marking the end of the Salzburg University year, held in the marketplace in front the university church (Kollegienkirche) – thus the “Posthorn” Serenade’s classification as Finalmusik. The seven-movement work for wind instruments (among them the posthorn to which it owes its nickname), timpani and strings opens with majestic vehemence and dramatic, dignified seriousness. Over the ensuing 40 minutes it moves back and forth between state ceremonial and the dance floor. An exception to this polarization is the fifth movement, a gently brooding D minor Andantino. There is also a remarkable sequence of solos for flute and oboe in the G major Concertante (Andante grazioso) and the Rondo (Allegro ma non troppo). But it is the posthorn solo in the second Trio of the D major minuet that gives the serenade its name and the instrument another opportunity to explore its huge expressive potential – a force of nature, as it were, turned into tonal culture.

A force of nature, turned into tonal culture. You could also say that about Gustav Mahler’s symphonies. However, the dimensions we’re dealing with here are much bigger than in the Mozart. Mahler completed his First Symphony in 1888 (though it later underwent wholesale revision). At that time he was serving as conductor at the Leipzig municipal theatre. Referring to his earliest symphonies, he declared that they “contain his whole life. In them I have set down my experience and suffering, truth and poetry in words.” At the same time, Mahler didn’t regard such a confrontation of biographical and musical reality as programme music, even though he was still characterizing the symphony as a “symphonic poem in two parts” at its premiere in Budapest in 1889.

A “Wayfarer” piece: the opening movement

Whatever associations one may form while listening to this work, its powerful attraction is already fully operational in the ethereal opening string harmonics. Out of the mists, a descending, only apparently harmless 4th motif forms itself as the music’s first intervallic element. Then the silhouette of a fanfare slowly and hesitantly approaches: the imaginary hero and the atmosphere of (romantically charged) nature, enriched with a gently lyrical horn duet. From somewhere a cuckoo calls, perhaps the same one we know from the Songs of a Wayfarer. And then one of those lieder is quoted: we encounter it in the cellos’ melody, clothed in the tone of folk music and strongly alluding to the Wayfarer song “Ging heut morgen übers Feld”. From this amalgam of divergent materials, the composer now develops his symphonic structure, in the course of the movement giving these constituent shapes ever-greater scope to unfold in the orchestral expanse.

“A rhythmic experience of compelling intensity”: the scherzo

The opening movement was originally followed by an Andante entitled Blumine. Following the symphony’s third performance, in Weimar, however, the composer jettisoned the movement along with entire literary programme. As a result the scherzo now comes second and the vital, nervous impetus of the first movement encroaches on it directly. Certainly we can agree with the influential German music critic and Mahler champion Paul Bekker when he wrote that this whole movement is “a rhythmic experience of extraordinarily escalating force and compelling intensity”. In other words: here is where the piece goes public and onto the roughly finished ländler floorboards. But Mahler hasn’t forgotten the tradition: the measured pace recalls Beethoven’s minuets as does the theme’s firmly closed periods and the corset-like structure. Juxtaposed with that are the splendour and variety of the musical imagery, the overflowing melodic manner, the principle, so to speak, of bursting its banks that is in fact a stylistic feature of every Mahler symphony. In these works his aspirations are always oriented not just to the world but also beyond.

The world is indeed a vale of tears. The third movement funeral march, nothing less than a vicious grotesque, tells of that. This minor-mode paraphrase of the children’s song Frère Jacques is full of bitter irony, oppressive uncertainty, longing and lugubrious shadows: a kind of numbed musical melancholy that never completely dissipates even in milder passages. No wonder that Mahler cited as one of his sources of inspiration the drawing The Huntsman’s Funeral by Schubert’s friend Moritz von Schwind.

But it gets even deeper, darker and more absurd. In early deliberations over the work’s programme, Mahler characterized the 20-minute-long finale – which can give even seasoned listeners the impression that it will, or can, no longer stop – as having been modelled after Dante’s Divine Comedy, referring to itas “Dall’inferno al paradiso”. The movement begins accordingly with a piercing outcry, answered at once by a four-note motif in the brass: a kind of “aural symbol of the Cross”, as Liszt called this cliché of Gregorian origin. Almost diabolically, the cliché steers a triple motif (repeated several times) into the parade. There follows a ballad in which Mahler alludes to the final part of his early cantata Das klagende Lied. Only then does the work’s creator decide to return to earth in order to seek Paradise. It has been less of a journey “per aspera ad astra”, through hardship to the stars, than an epic process, stretching back to the opening movement in reminiscences (theme: “Recollection”), but also marked by upheaval and rejection. Mahler said he wanted to represent a struggle in which victory was farthest away just when it seemed close at hand. Correspondingly, the conciliatory tonal goal is not achieved until a harmonic lightning flash once again tears through the musical massif. Mahler himself declared: “My D major chord had to sound as though it had fallen from heaven, as though it had come from another world.”

Gustavo Dudamel was born in Barquisimeto in Venezuela in 1981 and trained as a conductor, violinist and composer: he studied the violin with José Francisco del Castillo at the Latin American Academy for the Violin and took lessons in conducting with Rodolfo Saglimbeni and José Antonio Abreu. Since 1999 he has been music director of the Simón Bolivar Youth Orchestra of Venezuela, and together they have appeared four times in the Berlin Philharmonie. He was only twenty-three when he won the Gustav Mahler Conducting Competition organized by the Bamberg Symphony Orchestra in 2004. Since then he has become an iconic figure in the world of classical music. He is honorary conductor of the Gothenburg Symphony Orchestra, where he served as principal conductor from 2007 until 2012. Since the 2009/10 season he is music director of the Los Angeles Philharmonic. In addition, he is a regular guest conductor with the Philharmonia of London, Milan’s La Scala and the Vienna Philharmonic. He made his debut with the Berliner Philharmoniker at its annual Waldbühne Concert in June 2008; in June 2014 he conducted works by Birtwistle and Mahler, stepping in for Mariss Jansons, and shortly after he lead the orchestra again at its Waldbühne Concert and on tour in Europe. His many distinctions include the Royal Philharmonic Society’s Music Award for Young Artists (2007). Dudamel was inducted into “l’Ordre des Arts et des Lettres” as a Chevalier in Paris in 2009 and into the Royal Swedish Academy of Music in 2011. He has been named Musical America’s 2013 Musician of the Year; in 2014 he received the Leonard Bernstein Lifetime Achievement Award for the Elevation of Music in Society.