A Sibelius evening with Simon Rattle and Leonidas Kavakos 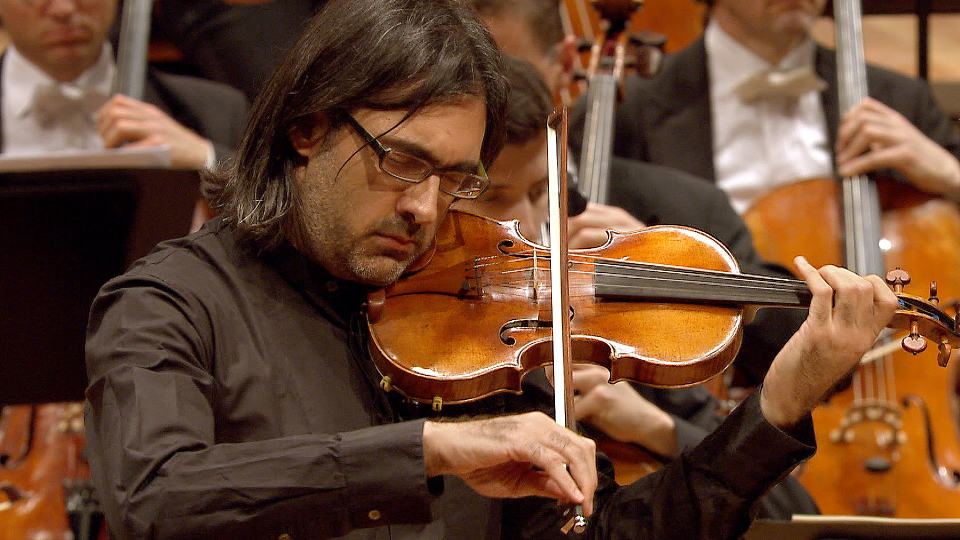 After his first two symphonies, Sibelius left the safe ground of the traditional four-part symphony structure. With the Third he created a three-movement composition that in no way forgoes dance-like diction, despite leaving out a Scherzo. As in the two preceding works, the music heads strictly towards the finale, which Sibelius at a Moscow guest performance in 1907 described as “crystallization of thought from chaos”: a hymnal melody line ascends from a musical “primal state”; its almost ceaseless intensification is enhanced by the brass in the background.

With the Fourth Symphony, in contrast, Sibelius avowedly uttered his “protest against present-day music” and responded to the “circus” of gigantic orchestration with a comparatively neo-classical work, transparent in a way characteristic of chamber music that leads to an internalised expression: “This is my most spiritual work.” This second Sibelius evening conducted by Sir Simon Rattle is complemented by Sibelius’s Violin Concerto, unmistakably dedicated to the Romantic concert tradition with virtuosity and spirit.

The soloist of the evening is Leonidas Kavakos, the Philharmoniker’s Artist in Residence in the 2013/14 season and one of the most acclaimed violinists of our time. He has a particularly close relationship to the Sibelius concerto – indeed, he won the International Sibelius Competition in Helsinki in 1985 with the work when he was just 18.

Two Symphonies and the Violin Concerto of Jean Sibelius

It was a long and, particularly towards the end, difficult road the symphony had to take from the middle of the 18th to the beginning of the 20th century. After the promising beginnings of Giovanni Battista Sammartini, Luigi Boccherini and François-Joseph Gossec and the heyday
of the First Viennese School, the genre reached a point of no return with Ludwig van Beet­hoven’s Ninth Symphony which made the composing of symphonies seem obsolete, if not impossible. Those who nonetheless made the attempt – Robert Schumann, Johannes Brahms or Anton Bruckner – found it difficult. Others sought their salvation in freer, often programmatic forms, which were given an initial impetus by Hector Berlioz’ Symphonie fantastique. At best, the symphony enjoyed a certain standing in the context of some national schools of the 19th century, such as can be seen in the works of Niels Wilhelm Gade, Antonín Dvořák, Alexander Borodin, Nikolai Rimsky-Korsakov or Peter Tchaikovsky. In the end, it is only in the symphonic cosmos of Gustav Mahler that the classical-romantic model ultimately appears to have survived. Anyone who subsequently held on to the four move­ment order of sonata form, trio, scherzo and finale, revealed himself to be either an eclecticist or Neo-classicist.

This is at least the image of the genre from a Central European point of view. From a broader perspective however, one can see that particularly in the years just before and after the First World War, the symphony had not at all gone out of fashion. Even if one limits oneself to composers whose names still have a certain ring on the concert stage, the list of sym­phonists is surprisingly long: in France there were Vincent d’Indy, Albéric Magnard, Joseph Guy Ropartz, Albert Roussel and Charles Tournemire; in Russia Reinhold Glière, Vasily Kalinnikov, Nikolai Myaskovsky, Sergei Prokofiev, Sergei Rachmaninoff, Alexander Scriabin and Maximilian Steinberg; in England Edward Elgar and Ralph Vaughan-Williams; in the Czech Republic Josef Bohuslav Foerster and Josef Suk; in Poland Karol Szymanowski; in Denmark Carl Nielsen – and in Finland Jean Sibelius: the most significant symphonist of the early 20th century along with Mahler – even if this may initially sound like an exaggeration.

In order to understand Sibelius’ significance as a symphonist, one should in the first instance beware two (pre-)judgemental opinions: one should not view him merely as a Finnish national composer, and forget René Leibowitz’ defamatory description of Sibelius as “the worst composer in the world”. Sibelius’ music followed different rules and different routes to, say, Arnold Schoenberg’s serialist compositions, evolving from the classical-romantic models of melody and form. Anyone who only accepts this view would probably judge no differently to Theodor W. Adorno in his infamous Glosse über Sibelius in 1937: “As themes, some completely prosaic and trivial sequences of notes are presented, these sequences of notes are met with an early accident, like an infant that falls off a table and injures its spine. They cannot walk properly.” The idea that Sibelius’ symphonic concept should deliberately reflect the gradual process of learning to walk – a kind of “musical production while com­posing” or as Wolfgang Rihm expressed it, “music as a rambling form” – was alien to Adorno.

The beginning of Jean Sibelius’s fleet-footed, classicistic Third Symphony is marked by contrast: an overtly folk-like first theme leads abruptly to a lyrical secondary theme intro­
duced by the cellos. After a development section of chamber-like transparency, both themes are intensified, reaching an apotheosis before a brief coda that is energetically concluded by two powerful chords. The central Adagio, which features one of Sibelius’s loveliest melodic inspirations, is followed by a two-section finale, in which a new theme – to be played “con energia” – replaces the expected recapitulation. In the further course of the movement, this theme becomes the subject of an extended process that culminates just before the work moves to a surprisingly curt ending.

Although Sibelius’s D minor Violin Concerto, which concludes with a genuinely violinist tour de force of cascading scales, arpeggios and passages of taxing double stops, adheres to the traditional formal model, the opening movement is unconventionally structured. After the first cadenza, which serves as a transition between the principal and subsidiary themes, a further solo cadenza functions as the actual development section. Following the slow movement –
a lyrical Adagio in romanza character – the finale opens in the style of a danse macabre. With the entry of the secondary theme, an unconventional mix of polonaise and tarantella, the music’s demonic character is increasingly overshadowed by a playful element. It was prob­ably this aspect of the piece that suggested a “polonaise for polar bears” to the great English musical scholar Sir Donald Tovey – a charming alliteration which, however, led to the wide­spread misconception that there are polar bears in Finland.

With its peculiar formal layout – each of two slow movements is followed by a fastish one – Sibelius’s Fourth Symphony takes some time to gather momentum. The syncopations of the lugubrious introductory theme defy clear metrical scanning, the music coming to a halt again and again. Even the feeling of headway awakened by the Allegro second movement’s oboe theme stagnates under the strain of its second idea. The resignation reflected by this “scherzo” is unmistakable. Now and then, the ensuing Largo adumbrates the despairing tone of Gustav Mahler’s Ninth Symphony (which had its premiere roughly a year after Sibelius’s Fourth), although the major tonality here suggests gentle consolation, notwith­standing all the melancholy and acerbity. At last, with the beginning of the finale, the music achieves a sense of vigorous energy, but then, upon reaching its apex, it disintegrates into
tiny motivic particles. The symphony ends in fragmentation, the final A minor chords under­scoring the fundamentally tragic character of the whole composition.

Leonidas Kavakoswas born in Athens, Greece, in 1967 and started playing the violin at the age of five. After studies at the Greek National Conservatoire in his hometown, an Onassis Foundation scholarship enabled him to attend master classes with Josef Gingold at Indiana University. In 1985 he won the Sibelius competition and then the Paganini competition in 1988. Following these successes, he received invitations from all corners of the world. Kavakos now appears in concert with the world’s great orchestras and conductors both in Europe and in North America, in addition to regular visits to renowned festivals worldwide. His partners in chamber music include Emanuel Ax, Yuja Wang and Gautier Capuçon. After having held the position of Principal Guest Artist of the Camerata Salzburg for six years, Kavakos was Artistic Director of the orchestra from 2007 until September 2009. Leonidas Kavakos has also established a strong profile as a conductor and has worked with the London Symphony and Boston Symphony orchestras, Deutsches Symphonie-Orchester Berlin and the Orchestre Philharmonique de Radio France among others. Since his debut in in May 2003 Leonidas Kavakos has appeared several times with the Berliner Philharmoniker. In the 2012/13 season he was the orchestra’s artist in residence. His last appearance with the Berliner Philharmoniker was in April 2013 under the direction of Sir Simon Rattle, performing Henri Dutilleux’s Violin Concerto L’Arbre des songes. Leonidas Kavakos plays the “Abergavenny” Stradivarius of 1724. He was voted Gramophone Artist of the Year 2014.

Simon Rattle conducts Tippett’s “A Child of Our Time”