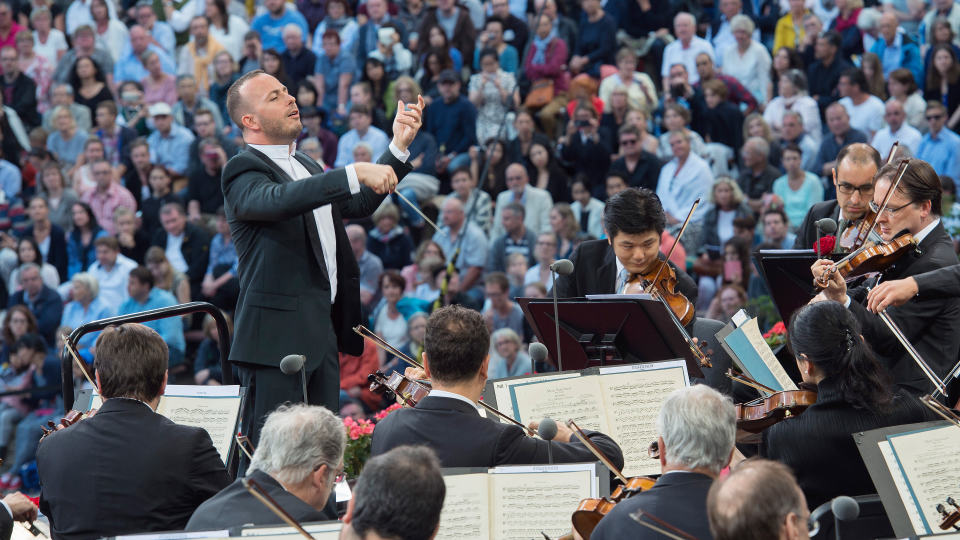 This concert was a dual premiere for Yannick Nézet-Séguin: for the first time, the Canadian conducted the Berliner Philharmoniker at their last concert of the season at the Waldbühne. In addition, he presented himself, for the first time since his debut with the orchestra in 2010, as an interpreter of the two major Czech national composers, Bedřich Smetana and Antonín Dvořák.

With his orchestra cycle Má vlast, Smetana created a musical portrait of his home country; particularly the second part, The Moldau, became the embodiment of Czech music. In this stirring symphonic poem, the composer describes the course of the Vltava river – from its source passing by merry village festivals, hunting scenes, dangerous white water rapids and the majestic city of Prague – until it disappears into the distance after passing the castle of Vyšehrad. In the work, Smetana combines rhythmic and melodic elements of Czech folklore with stylistic devices of Western symphonic music.

The same also applies for Antonín Dvořák, who first oriented himself towards composers like Wagner, Schumann and Liszt before fashioning his own musical language, shaped by the Bohemian idiom, in the Slavonic Dances. Thus his Sixth Symphony contains many allusions to Czech folk songs and dances that are typical of Dvořák’s music. The Violin Concerto, which the publisher Simrock commissioned from the Prague composer, is also inspired by Slavic dance rhythms. The captivating piece is played by the Georgian violinist Lisa Batiashvili. At her last concert with the Berliner Philharmoniker in 2012, she was acclaimed by the press as a “ballerina on the violin”.

The 1995 Europakonzert from Florence with Zubin Mehta and Sarah Chang

2002 Europakonzert from Palermo with Claudio Abbado and Gil Shaham

Yannick Nézet-Séguin makes his debut with Berlioz and Prokofiev