Simon Rattle and Magdalena Kožená at the Waldbühne 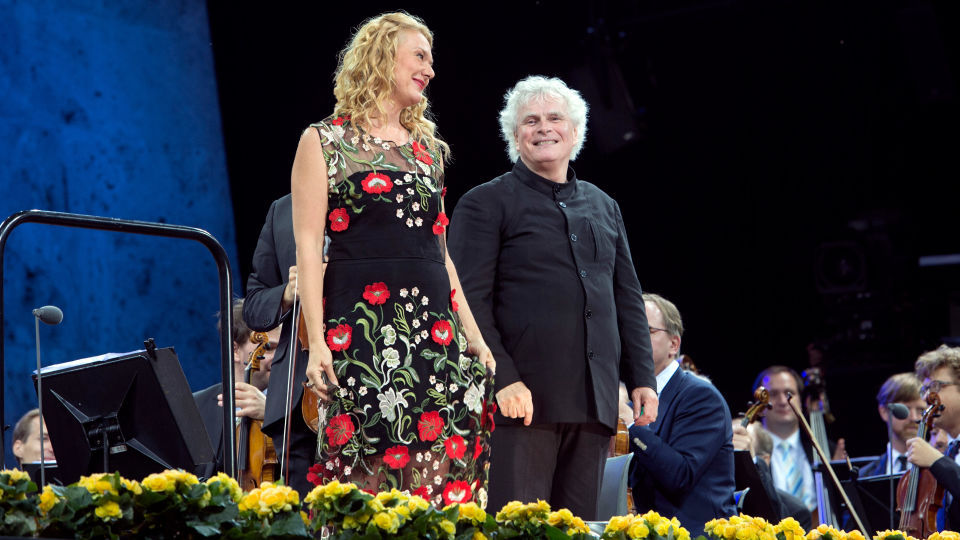 Goodbye Sir Simon! With this concert from the Waldbühne, the Berliner Philharmoniker not only bring the concert season to a close, but also say farewell to Simon Rattle in his capacity as the orchestra’s chief conductor. Including this evening, the British conductor has been at the helm of the traditional season closing event seven times, an event whose summer open-air atmosphere, its music-loving, picnicking crowds, a great guest star and special programming all combine to give it its special flair. In 2004, at the end of his second season with the Philharmoniker, Simon Rattle appeared at the Waldbühne for the first time and conducted a Tchaikovsky night, in which Lang Lang made his first appearance as a soloist in a concert with the orchestra, performing the Russian composer’s First Piano Concerto. Audiences didn’t let the cold weather spoil the mood and applauded enthusiastically, leading Simon Rattle to remark, “What we have here is the biggest family”.

The Tchaikovsky programme was followed in 2005 by a Nuit française with Maurice Ravel’s Boléro, Paul Dukas’ Sorcerer and Camille Saint-Saëns’ Carnival of the Animals – plus Francis Poulenc’s Concerto for two pianos performed by the sisters Katia and Marielle Labèque. In 2007, the musical theme was Rhapsodies, in 2009 Russian Rhythms with Yefim Bronfman as the soloist in Rachmaninov’s virtuoso Third Piano Concerto, and Igor Stravinsky’s Le Sacre du printemps. Four years later, Sir Simon and the Philharmoniker proved that even Ludwig van Beethoven’s hallowed Ninth Symphony suits the Waldbühne. In 2015, the conductor and orchestra then took their audience on a tour of Hollywood’s most famous film scores.

For Rattle’s last concert, too, you can look forward to a special programme. It includes the Chants d’Auvergne by Joseph Canteloube, a collection of songs in which the French composer and folk music researcher arranged the songs of the Auvergne for voice and orchestra. Its pastoral tone, inspired by the beauty of nature, makes the songs – sung here by Magdalena Kožená – an ideal programme item for the summery backdrop of the Waldbühne. And finally – to quote Sir Simon – “same procedure as every year”: Paul Lincke’s uplifting march Berliner Luft as the unmissable encore at every Waldbühne concert.

“Fellini, Jazz & Co.” with Riccardo Chailly at the Waldbühne