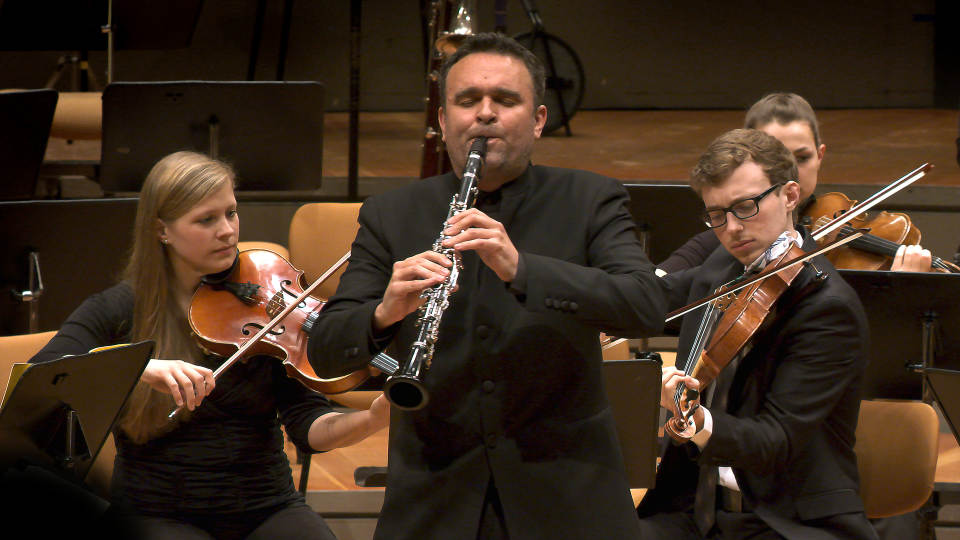 They are among Germany’s best up-and-coming musicians. Since 1974, the Junge Deutsche Philharmonie has been joining together music students aged 18 to 28 who have only one goal: to play later in a renowned symphony orchestra. The young instrumentalists can not only acquire orchestral experience at a professional level in the ensemble, but also learn how to democratically participate in the programme planning and selection of the conductors and soloists. Contemporary music constitutes an important focal area of their repertoire and is included in almost every program.

For this year’s performance in Berlin’s Philharmonic Hall, the members of the Junge Deutsche Philharmonie have invited a musician with three different sets of musical gifts: Jörg Widmann is a composer, clarinettist and conductor, and will in fact present himself in all three functions at this concert. The concert opens with the Andante from the Clarinet Sonata in E-flat major, which Felix Mendelssohn Bartholdy composed at the age of 15. The movement captivates us with its intimate, lyrical theme, and has already fascinated Jörg Widmann for a long time; he transcribed it for clarinet, string orchestra, harp and celesta in 2016. What’s more, he will conduct his Messe for full orchestra, composed in 2005, about which he writes: “The musicians are the protagonists: solos, choir and orchestra rolled into one. For example, there is an antiphony between choir and organ in the ‘Monodia’ of the ‘Kyrie’, but no choir or organ is really involved. In central liturgical passages, for example at the beginning of the ‘Kyrie’ or the ‘Gloria’, the notes appear like a gigantic choral score. Every musician ‘sings’ the particular mass text on his instrument.”

Between Widmann’s two works, you will experience Robert Schumann’s Second Symphony, with which the composer sought to overcome a serious psychological crisis in 1845-46. Today, it is considered the epitome of a romantic symphony. In the finale of this work, which incidentally was premiered by Mendelsohn Bartholdy, the composer quotes a melody from Ludwig van Beethoven’s song cycle An die ferne Geliebte – as a gesture of gratitude to his wife Clara, who stood by him at that difficult time.

Fourth concert in the Brahms/Schumann cycle with Simon Rattle

Manfred Honeck and Yo-Yo Ma at the Easter Festival