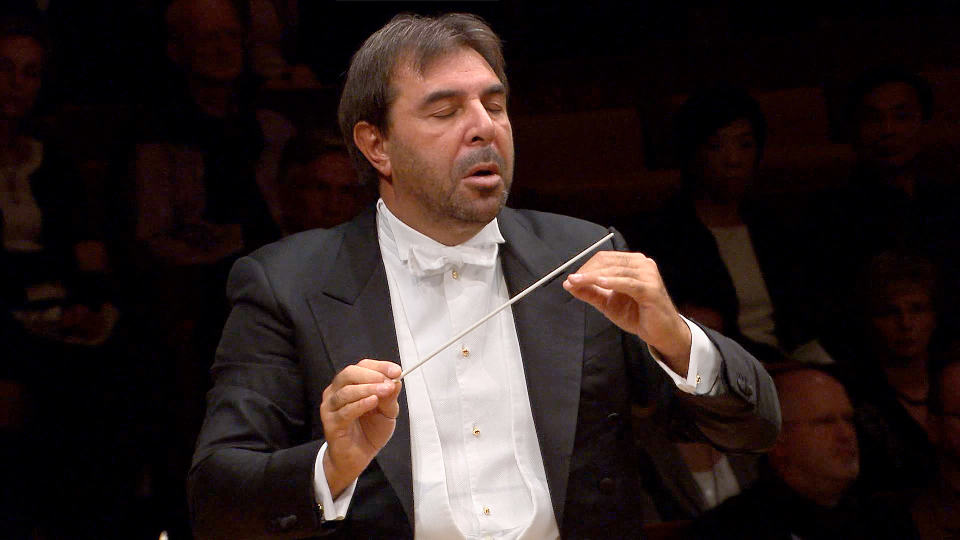 In the “principle of the developing variation”, Arnold Schoenberg identified a fundamental element of Johannes Brahms’s compositional technique. With the Haydn Variations op. 56a, called thus though actually based on a chorale tune of unknown origin, Brahms composed a work in 1873 that can be regarded as a precursor to his First Symphony, premiered three years later. At the same time it already extends towards the final movement of Brahms’s last symphony from 1884–85, which is constructed as a passacaglia.

In this Berliner Philharmoniker concert conducted by Daniele Gatti, Richard Wagner is represented as musical antipode to Brahms with instrumental excerpts from Götterdämmerung, first performed at the first Bayreuth Festival in 1876.

In addition, the programme includes Alban Berg’s Three Orchestral Pieces op. 6, undertaken shortly before the outbreak of the First World War and in part premiered by the Berliner Philharmoniker in 1923 conducted by Anton Webern, Berg’s university friend. The work, which is dedicated to Berg’s “teacher and friend Arnold Schoenberg in immeasurable gratitude”, draws on the compositional rigour of Brahms’s compositions as well as Wagner’s instrumental refinements, but nonetheless marks the dawn of a new musical epoch.

The last part of Wagner’s Ringtetralogy is filled with narrative, commentary and recapitulation. There are practical, informational reasons for this: a great deal has happened since Alberich stole the Rhine gold and forged the dreaded ring. The audience must not lose the thread of the story. Yet in the Norn scene that precedes the drama of Siegfried’s death they hear how the rope literally breaks for these spinners of destiny. They can still tell each other – and us – what was, what happened previously and in the meantime, but not what will be: “Eternal wisdom ends! The wise ones speak to the world no more.”

But what “wisdom” does the orchestra convey in the instrumental showpieces of Götterdämmerung(Twilight of the Gods)? The Morgendämmerung (Dawn) achieves the difficult transition from the doomsday atmosphere of the Norns to the ecstatic love and desire for heroic new deeds during Brünnhilde and Siegfried’s brief happiness on the rock. Siegfrieds Rheinfahrt(Siegfried’s Journey to the Rhine), the glorious farewell and the Funeral March function as transformational music. They are also recapitulations, however, antithetically related to each other as the hero’s departure and the hero’s dirge. At the same time they are “film music” before a closed curtain, when, for example, at the beginning of the Journey to the Rhine the music literally follows the hero’s path: through Loge’s wall of fire, to the realm of the Rhine maidens and the harmonically darkened world of the Gibichungs. After despairing chromatic triplet figures in the violas and cellos and shattering blows, during the nocturnal, moonlit Funeral March central motifs again pass by at a solemn pace and Siegfried’s horn call is heard in “victorious” augmentation. A moment of triumph “in death” and yet merely a fleeting apotheosis. How bitter Brünnhilde’s “on to new deeds” motif from the euphoric opening sounds now. The hero is dead, in a world without hope, yet the music depicts a scene of transcendence and does not leave us entirely without consolation.

The “Haydn Principle” – on Brahmsʼs Haydn Variations, op. 56a

Variations on a theme by Joseph Haydn? Although the theme entitled “Chorale St. Antoni” that Brahms may have copied from a collection of wind divertimentos in November 1870 appeared under Haydn’s name, the attribution by Haydn’s biographer, Ferdinand Pohl, is by no means certain. These “Feldpartiten” (music composed for outdoor performance) are found in only a single manuscript, and the catchy chorale theme, in particular, appears to be an old pilgrim’s song. Nevertheless, it is appropriate that we refer to Brahms’s op. 56 as the Haydn Variations, since it has less to do with respect for a happy thematic idea – whoever it originally came from – than the principle. What Brahms, on his long path to the First Symphony, admired about Haydn was clarity, classicism, creativity and the association of these abstract qualities with an unmistakably characteristic hand: “That was some fellow! How miserable we are by comparison!”

Thus, the “Haydn principle” does not depend on the authenticity of the theme made famous by Brahms but the technique which the great Haydn admirer not only uses here but demonstrates in an exemplary fashion as a lesson for his “miserable” musical contemporaries. To a certain extent, Brahmsʼs variations have Haydn himself as their theme, not an arbitrary theme that he did not even compose. It combines outward simplicity with subtlety, however, in its structure of two five-bar phrases, then two four-bar phrases, followed by the restatement of the opening with a perfect cadence, concluding with a seven-bar coda over a pedal point. When Brahms lets this pattern shine through nine variations, the message becomes clear: he is interested in its capacity for development, the essence of creativity – looking at a theme from different angles, examining it from front and back, exploring its potential. The key of B flat major borrowed from the original work is changed to minor in variations 2, 4 and 8. The vivace of the fifth variation features elfish scurrying and rhythmic complexity, while number 6, with the same tempo indication, focusses on harmonic development. A gently lilting, grazioso siciliana follows, then an eerie pianissimo Presto. Finally, the splendid Finale: a chaconne, whose monumental, resolutely repeated bass is derived from the theme. What happens here is like a gentle awakening of the entire orchestral organism, Haydn’s spirit from Brahms’s hands, and when the piccolo runs and triangle sparkle above the contrapuntal build-up at the end, euphoric effects cannot be ruled out. A colon anticipating the coming symphonic adventures. Brahms conducted his Haydn Variations in Vienna on 2 November 1873, and the critic Eduard Hanslick heard in them “silvery streams of free, modern feeling and expression.”

Alban Berg visited his former teacher, Arnold Schoenberg, in Berlin in mid-1913. The visit ended with a criticism of the 29-year-old’s most recent score that was devastating to him because it was so fundamental. When we read the letter that Berg sent to the revered master soon after returning home on 14 June, we can sense how hurt he was: “But I have to thank you for your censure, as much as for everything else I have received from you, knowing full well that it is meant for my own good. I need not tell you, dear Mr Schoenberg, that my deep pain is assurance that I have taken your criticism to heart.” In any case, Berg had to respond to the “censure” in an artistically productive way, and his plan to dedicate a large orchestral work to Schoenberg for his 40th birthday in September of the following year must have evolved soon thereafter. Berg had begun a symphony project, but his teacher had advised him to write “character pieces”. His answer was the Three Pieces for Orchestra. He was actually able to present two of the three pieces, Präludium (Prelude) and Marsch (March) on schedule to “my teacher and friend, Arnold Schoenberg, in immeasurable gratitude and love”; Reigen (Round Dance), the middle piece, was not finished yet. Did Schoenberg realize after this incredible dedication what incredible music he held in his hands? His reaction was almost incomprehensibly lukewarm; he thanked Berg for the dedication but had not yet found the time to devote himself to the score.

When the Three Pieces for Orchestra were performed in their entirety for the first time in Oldenburg in 1930 (Anton Webern had conducted only the first two movements during an Austrian Music Week in Berlin in 1923), Berg warned the conductor, Johannes Schüler, about this “complicated score”. The opening of the Prelude may provide a clue as to how the work is to be understood, namely, as an extremely ambitious response to Schoenberg’s criticism. No theme is presented; everything develops out of nothing, in a highly organized fabric of unpitched percussion sounds, then timpani and flutter-tonguing flutes. What develops at the beginning and soon drifts resolutely, threateningly and longingly towards a culmination ends in symmetry after just under five minutes, as disintegration. The resemblance of this beginning to the opening of Mahler’s Ninth Symphony has frequently been pointed out. Theodor W. Adorno, Berg’s student for a time, relates how Berg showed him the score; of his first visual impression Adorno exclaimed: “That must sound like playing Schoenberg’s Orchestral Pieces and Mahler’s Ninth Symphony, all at the same time.” Despite the dubiousness of the compliment, Adorno reports that Berg smiled with pleasure.

Daniele Gatti studied composition and conducting at the conservatory in his home town of Milan. He was musical director of the Royal Philharmonic Orchestra (1996 – 2009) and the Orchestra dellʼAccademia Nazionale di Santa Cecilia in Rome (1992 – 1997), principal guest conductor at the Royal Opera House, Covent Garden (1994 – 1997), musical director of the Teatro Comunale in Bologna (1997 – 2007) as well as chief conductor of the Zurich Opera House (2009 – 2012). Since September 2008, he has been responsible for the musical direction of the Orchestre National de France with which he presented, among others, a Mahler cycle at the Théâtre du Châtelet, a Beethoven cycle (which was coupled with five world premieres by French composers) and a Tchaikovsky cycle. Daniele Gatti has recently been appointed the Royal Concertgebouw Orchestra’s new chief conductor, a post he will assume in 2016. Gatti is also a regular guest at the worldʼs most prestigious opera houses, including the Vienna State Opera, the Bavarian State Opera in Munich, at the Metropolitan Opera in New York and La Scala in Milan, where he has conducted works such as Simon Boccanegra, Don Carlo, Aida, Otello, Madama Butterfly, Boris Godunov, Fidelio, Parsifal, Lohengrin, Wozzeck, Lulu and Moses und Aron. Daniele Gatti is one of the few Italian conductors to be invited regularly to the Bayreuth Festival. At the Salzburg Festival he conducted the Vienna Philharmonic Orchestra in productions of the operas Elektra (2010), La Bohème (2012) and Die Meistersinger von Nürnberg (2013); this year, Verdiʼs dramma lirico Il trovatore was on the programme. For his outstanding achievements, the artist has been honoured with the titles “Grande Ufficiale dellʼOrdine al Merito” and “Chevalier de lʼOrdre des Arts et des Lettres” by the Italian and French governments respectively. Daniele Gatti first conducted the Berliner Philharmoniker in April 1997 in three concerts which included works by Hector Berlioz, Franz Liszt and Béla Bartók.

The Berliner Philharmoniker, Simon Rattle and Karita Mattila at the “Proms”