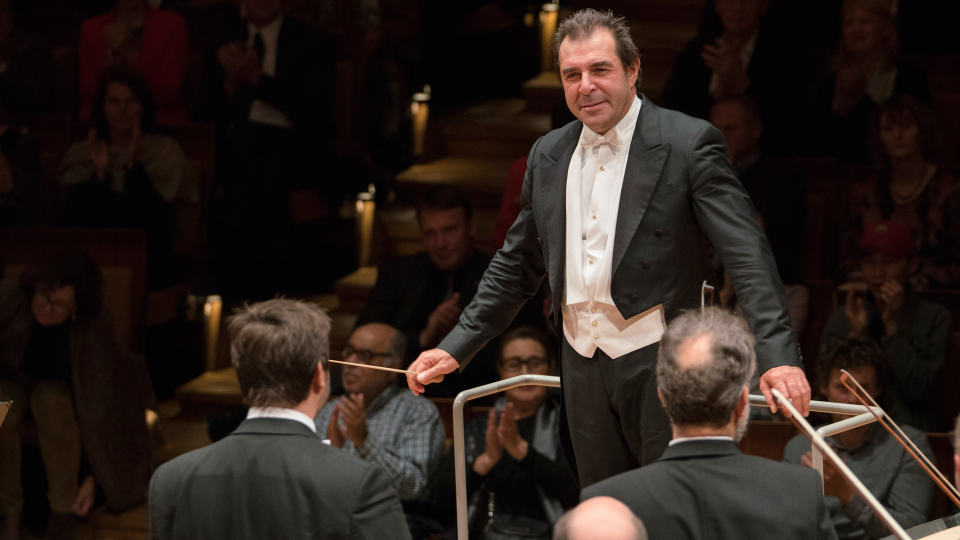 Daniele Gatti, current chief conductor of the Royal Concertgebouw Orchestra Amsterdam, has held the artistic fortunes of many internationally renowned orchestras and opera houses in his hands – including the Accademia Nazionale di Santa Cecilia, the Royal Philharmonic Orchestra, the Orchestre National de France and the Teatro Comunale di Bologna plus Zurich Opera. Gatti celebrates his 20th anniversary as a guest conductor with the Berliner Philharmoniker with a programme that features two quite different works from the symphonic repertoire.

The Second Symphony by Johannes Brahms was started while the composer was on holiday at the Wörthersee in 1877 (“The melodies fly so thick here that you have to be careful not to step on one” Brahms), and was completed in October of the same year. With his tongue firmly in his cheek, he told his publisher that the work was “so melancholy that you will not be able to bear it. I have never written anything so sad, and the score will have to be printed on black-bordered pages!” However, the Vienna premiere of Brahms’s Second on 30 December 1877 surprised the audience with music that, in the words of the Viennese critic Eduard Hanslick, “shines like the warming sun,” and “radiates a healthy freshness and clarity”, but yet “here is nevertheless much to listen to and dwell on”.

We are taken to very different realms in Paul Hindemith’s symphony Mathis der Maler, commissioned in 1933 by Wilhelm Fürtwängler, and based on the composer’s at that time still unfinished opera. The titles of the work’s movements – “Concert of Angels”, “Entombment” and “The Temptation of St. Anthony” – relate to the painted panels of the Isenheim altarpiece created by Matthias Grünewald between 1510 and 1516. While the music reflects Hindemith’s personal living conditions after the Reichstag election of 1933, the modernist idiom of the composer was a thorn in the side of the Nazis, as was his marriage to a “half-Jew”. After Hindemith’s career as a violist came to an end as a result of the ban on him performing, and the publication of his Handbook of Music was prevented, the premiere of the Mathis symphony by the Berliner Philharmoniker under the baton of Furtwängler on 12 March 1934, acclaimed by audiences and critics alike, was a cultural and political ordeal. The rest is history: in 1938, despite resolute support from Furtwängler, Hindemith decided to turn his back on Germany and did not return until the end of the 1940s.

This Faint Breath of Freedom

As Friedrich Schiller once so trenchantly formulated: art is merely play, not a serious business. He probably couldn’t (and didn’t) mean it in earnest, given how he himself suffered under government repression and harassment. More than a century and a half after the poet’s rebellion, we are confronted by another striking example of art colliding with power, a timeless parable of the necessity, indeed urgency, of aesthetic resistance. It is closely connected with the names of two figures who not only wrote music history in the 20th century but were also, in a sense, carried along by it: Paul Hindemith and Wilhelm Furtwängler.

While the composer is still tinkering with and polishing his megalomaniac, metaphysical music-theatre piece Mathis der Maler (Mathis the Painter), he receives a request from the conductor, an admirer, to write a symphonic work for the Berlin Philharmonic, to be performed in the near future. His friend’s wish suffices as commission and inspires Hindemith to devise an ingenious approach to his two tasks. He decides to proceed with composing the instrumental preludes he has already envisaged for the opera: in other words, to write them straight away as a sort of symphonic suite of three movements related to panels of Matthias Grünewald’s Isenheim Altarpiece. No sooner said than done, the half-hour work is completed in a few weeks during the winter of 1933-34 and given its premiere by Furtwängler and his formidable orchestra, as agreed, on 12 March 1934. The storm of acclaim in the hall is followed by a political hurricane.

Hindemith had been a thorn in the National Socialists’ eye for quite some time. When Furtwängler schedules the stage version of Mathis der Maler for production at the Berlin State Opera on Unter den Linden, Hermann Göring in person informs him that permission for the performance has not been granted by Hitler. Unimpressed, Furtwängler publishes an article in the Deutsche Allgemeine Zeitung on 25 November in which he attempts to defend the composer’s honour. Two years later comes the official decree. Henceforth, not a single piece from Hindemith’s pen may be performed in public. The incensed composer reacts as brusquely as his music: on 22 March 1937, he resigns his teaching position at the Berlin Hochschule, and in September of the following year he emigrates to Switzerland, where (in Zurich) his opera has recently had its highly successful premiere.

The music of the opera and symphony pursues a noble ambition, nothing less than eliciting with purely musical means an emotional state approaching that aroused in the viewer of Matthias Grünewald’s images. Re-creative creation as aesthetic parallel world. The first movement (“Angelic Concert”) – corresponding to the opera’s overture – reveals an unearthly and picturesque scene, Christ’s birth, which Hindemith seeks to translate into sound with the use of classical sonata form.

From the angels to the dead: “Entombment” is the title of the symphonic suite’s central piece. The lamentation of Christ at the open grave as depicted by Grünewald is reflected in music fully worthy of its subject. A funeral march is evoked, and the tone in the middle section remains contemplative and elegiac.

The final movement, entitled the “Temptation of St. Anthony”, is the only one not incorporated into the opera intact. It is based on Grünewald’s depiction of the legend on the right panel of the open altarpiece. A hideous sight: the saint lies on the ground, tormented by sinister, monstrous and lustful creatures and surrounded by small devils battling against the heavenly host. On Anthony’s side is a fellow sufferer, afflicted with eczema, grasping after the bible. How does this sound in the Hindemith? Masterful! The composer has interwoven eleven episodes, two of which form a motivic bracket: the torso of a French overture as well as the instrumental postlude to scene 3 of the opera’s sixth tableau. This music is like a dream (nightmare) vision, almost an elegy for lovers in a killing system, but in any case a symphony en miniature.

Hindemith was relating directly to the symphonic tradition that included Brahms, but he dealt with it far more wilfully than his great forebear. Brahms’s path to the symphony was arduous, as is well known. Essentially, the composer struggled through the entire creation of his First (already weighted down by its C minor tonality). Then the wall fell. No. 2 in D major, op.73 seems to soar on freely beating wings. Brahms composed the symphony in 1877 during his summer sojourn at Pörtschach on Lake Wörther, completing it in autumn of that year in Lichtental, near Baden-Baden. About the work’s style the great German musicologist Carl Dahlhaus wrote: “The claim that Brahms wrote chamber music even in his symphonic works is an exaggeration and yet thoroughly understandable. Music that turns inward, that tends to be restrained rather than emphatic, is hard to reconcile with the principles of a genre that, according to the influential critic Paul Bekker, does justice to its conception only when directed at a mass audience – in fact, at humanity as a whole.”

Actually, Brahms invariably does that. But in the D major Symphony he cloaks this objective in the character of a late idyll. Whereas the melodies of his First stride or stomp, long stretches of the Second almost suggest featherlike floating. And while in nearly every bar of the earlier work one senses his struggle to master the creative problems inherent in the genre, the new symphony manifests a state of relaxation (in several senses of the word). It would not be going too far to see in this work the Brahmsian “Pastoral”, which also means that not everything is Arcadia and there will be stretches of shadow as well as light.

The opening Allegro non troppo follows the usages of sonata-allegro form but, as so often in Brahms, enriched by models of variation. Arnold Schoenberg described it well with the words “economy, yet richness”. How cleverly Brahms sets up alternative worlds can be heard right at the beginning: the lyrical main theme is already joined by the introduction of a descending-4th accompanying figure in the bass. Out of this germ cell Brahms forms the central idea of the entire work as well as the contrasting minor-mode lullaby in the movement’s second theme group.

This tight interleaving of themes continues in the Adagio non troppo. Reflected in this movement in B major are the timbral colours, contrapuntal writing, gestures and treatment of material already heard. The striking middle section is tonally darkened to B minor as it mixes song and sonata forms. The dance-inspired Allegretto grazioso (quasi Andantino) dispenses with trombones, trumpets, bass tuba and timpani and sounds accordingly light-hearted. Brahms’s biographer Max Kalbeck aptly interpreted this movement, developed from a single thematic idea, as a dance suite: “A basic melody appears first as a minuet-like ländler, then as a galop, then as a sparkling fast waltz.” The energetic, life-affirming finale, Allegro con spirito, is in the home key of D major – a sublime triumph of art over everything threatening and sombre, whatever its provenance.

Daniele Gatti studied composition and conducting at the conservatory in his home town of Milan. In September 2016 he took up the post as chief conductor of the Royal Concertgebouw Orchestra. From 2008 until 2016, he has been responsible for the musical direction of the Orchestre National de France. Prior to this, Daniele Gatti was musical director of the Royal Philharmonic Orchestra (1996 – 2009) and the Orchestra dellʼAccademia Nazionale di Santa Cecilia in Rome (1992 – 1997), principal guest conductor at the Royal Opera House, Covent Garden (1994 – 1997), musical director of the Teatro Comunale in Bologna (1997 – 2007) as well as chief conductor of the Zurich Opera House (2009 – 2012). Gatti is also a regular guest at the worldʼs most prestigious opera houses, including the Vienna State Opera, the Bavarian State Opera in Munich, at the Metropolitan Opera in New York and La Scala in Milan, where he has conducted works such as Simon Boccanegra, Aida, Otello, Madama Butterfly, Boris Godunov, Fidelio, Parsifal, Lohengrin, Wozzeck, Lulu and Moses und Aron. Daniele Gatti is one of the few Italian conductors to be invited regularly to the Bayreuth Festival. At the Salzburg Festival he conducted the Vienna Philharmonic Orchestra in productions of the operas Elektra (2010), La Bohème (2012), Die Meistersinger von Nürnberg (2013) and Verdiʼs Il trovatore. For his outstanding achievements, the artist has been honoured with the titles “Grande Ufficiale al Merito” and “Chevalier des Arts et des Lettres” by the Italian and French governments respectively; he was awarded the prestigious Franco Abbiati Prize in both 2005 and 2016. In July 2016, the French Republic named him “Chevalier de la Légion d’Honneur”. Daniele Gatti first conducted the Berliner Philharmoniker in April 1997 in three concerts which included works by Berlioz, Liszt and Bartók; in his last appearances with the orchestra in September 2016 he conducted works by Debussy, Honegger and Dutilleux

Andris Nelsons and Guy Braunstein with works by Brahms and Strauss

An evening of chamber music with Christian Tetzlaff

Third concert in the Brahms/Schumann cycle with Simon Rattle