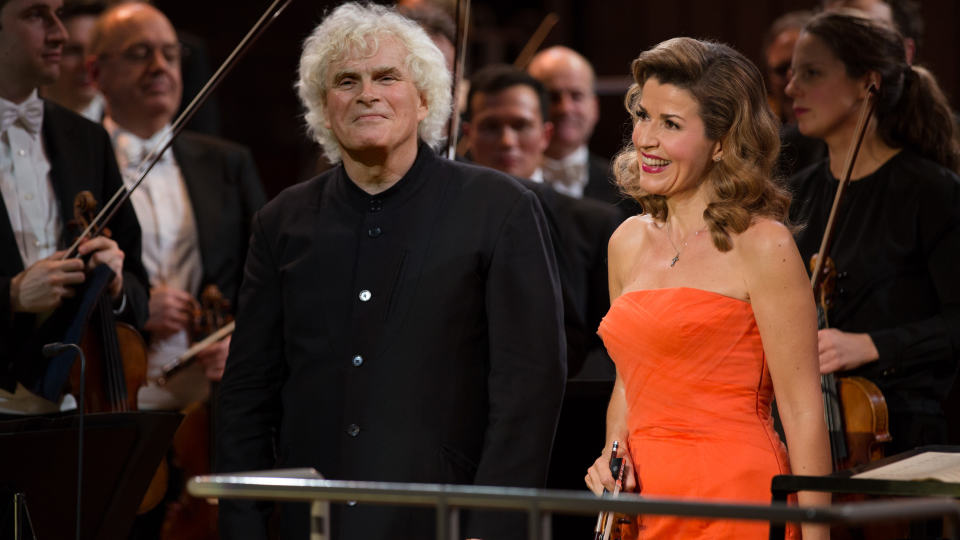 Anne-Sophie Mutter’s phenomenal career is closely tied to the Berliner Philharmoniker: she first performed with the orchestra as a discovery of Herbert von Karajan at the Salzburg Whitsun Festival in 1977 – aged just 13. Only a year later she debuted under Karajan in the Berlin Philharmonie with Mozart’s Violin Concerto in G major K. 216. Since then she has performed the great violin concertos by Beethoven, Bruch, Mendelssohn, Brahms and Dvořák with the Philharmoniker, plus Witold Lutosławski’s Chain II and Sofia Gubaidulina’s Intempus praesens.

Sir Simon Rattle and the Berliner Philharmoniker fill the rest of the programme with orchestral pieces and dances from French operas and ballets: the first is the witty and humorous overture to Emmanuel Chabrier’s comic opera L’Étoile, still entirely in the tradition of Offenbach’s operettas. The ballet suite from Jules Massenet’s opera Le Cid conjures up Spanish joie de vivre and their way of life. Francis Poulenc’s dance suite Les Biches, in contrast, whisks you away to the sophisticated, cheerful world of the Jeunesse dorée in the 1920s. Poulenc wrote the work in 1923 for Sergey Diaghilev’s famous Ballets russes and with it achieved his breakthrough as a composer.

The programme culminates in Maurice Ravel’s Poème chorégraphique La Valse, that famous apotheosis of the Viennese waltz that rapidly increases to a grandiose finale. Music just as effervescent and refreshing as champagne – what a way to kick off a festive turn of the year!

Joined at the Hip: Theatre and Politics in France

Surface brilliance and deeper meaning: the overture to LʼÉtoile by Emmanuel Chabrier

A programme of paradoxes to usher in the New Year. It begins with preparations for an execution and ends with the collapse of a civilization; and it comprises popular pieces which – apart from Maurice Ravel’s La Valse – are only rarely performed in Germany. After two glasses of champagne one might have the idea of attaching the words “Happy New Year” to the first bars of today’s concert, but in reality the breezy opening melody of the overture to L’Étoile, an opéra bouffe by Emmanuel Chabrier, comes back in the course of the work with the words “Le pal! Le pal! Est de tous les supplices le principal” (“The stake! The stake! The ultimate punishment”). The reference here is to impalement, the manner of execution that King Ouf I has publicly implemented to keep his people’s spirits high.

The unintentionally comic potentate is a type Chabrier knew only too well. Largely self-taught as a musician, the trained jurist was a public servant in the French ministry of the interior during the reign of Emperor Napoleon III. The character of Ouf, created in 1877, thus also symbolizes a backward glance at a very peculiar era. The interior ministry of the Second Empire was headed by the Duc de Morny, a half-brother of the emperor who had helped engineer the coup d’état of 1851 and wrote opera librettos on the side. His special interest was said to have been the monkeys in the imperial menagerie because they so closely resembled the courtiers.

The bizarre phenomenon of Napoleon III extended to his wife Eugénie, arch-conservative and unpopular yet also the model of elegance and fashion for a whole generation. And there was something else about her. The empress came from Spain to a country that adored everything Spanish. Ever since Théophile Gautier rhapsodized about its “ocean of light” and living under the “benevolence of clear skies” in a travel report, the land beyond the Pyrenees – not least because of its “gypsies” – had become an object of French yearning.

Another beneficiary of that yearning was Pablo de Sarasate. Camille Saint-Saëns dedicated to the Spanish virtuoso two violin concertos as well as his Introduction et Rondo capriccioso op. 28. “Anyone who attended my Monday musical soirees, will not forget the brilliance radiated there by my famous friend”, contended Saint-Saëns, evoking the aura of Sarasate, who died in 1908.

Although the features of the Introduction et Rondo capriccioso are reined in by a certain salon melancholy, they are shaped with subtlety and virtuosity. Especially characterful is the rondo theme in A minor, capricious and invigorated by appoggiaturas and syncopation.

Spanish colours: the suite from Le Cid by Jules Massenet

Seven years younger than Saint-Saëns, Jules Massenet was the most successful composer of the “Belle Époque”, though not uniformly admired. “He has no depth, but that doesn’t matter at all”, Saint-Saëns remarked, going on to say: “The realm of art is so immeasurably large. It can sink into abysses or penetrate the most secret corners of dark and distressed souls. But it need not.” Debussy, too, defended Massenet: There’s not much to choose between “pleasing old cosmopolitan Wagnerian ladies or perfumed young women, even if they don’t play the piano very well”. In fact, Massenet’s operas are frequently associated with sensitively portrayed female characters – for instance, Chimène, one of the title roles in an early opera undertaken but ultimately abandoned by Debussy. Massenet, however, had already brought Chimène onstage in 1885 in Le Cid as the beloved of Rodrigue, the medieval Spanish knight whose Arabic honorific lent the opera its name.

Massenet makes surprisingly few concessions to the story’s local colour, but for the ballet he dips his brush all the more deeply in the paint pot. This music was created in Marseille in a hotel suite – a place that probably triggered his decisive memory of a Spanish hotel, as Massenet reported with regard to the introductory Castillane: “It chanced that they were celebrating a wedding and they danced all night in the lower room of the hotel. Several guitars and two flutes repeated a dance tune until they wore it out. I noted it down.” Even more than the castanet accompaniment, one may be struck by the suite’s almost purist orchestration. The subject of Spain continued to fascinate the composer as late as his 1910 opera Don Quichotte.

Innocent only in appearance: the suite from the ballet Les Biches by Francis Poulenc

Massenet’s striving for the greatest possible harmony with his surroundings was quite foreign to Serge Diaghilev. The motto of the Russian impresario, who scored triumphs with his Ballets Russes in Paris during the early 20th century, was “Étonne-moi” – Astonish me! He was always on the lookout for new theatrical forms, even courting scandal in order to offer his audiences something unusual. To that end he possessed a unique instinct for the kind of works that led not only to the young Igor Stravinsky’s breakthrough but also, some ten years later, to one of the first successes of Francis Poulenc, barely 25 at the time: Les Biches (The Hinds/colloquially: The Little Darlings) was premiered in 1924 in Monte Carlo as a ballet with chorus. In 1939-40 Poulenc distilled from it an instrumental suite.

In this work he proves himself master of a kind of music at once sophisticated and sassy, containing along with folkloric and classicistic notes a pinch or two of jazz. Ultimately, what he envisaged was a modern form of the rococo: “I had the idea of these ‘fêtes galantes of 1923’ in which, as in some of Watteau’s pictures, you can either see nothing or imagine the worst.”

Vision and apotheosis: Tzigane and La Valse by Maurice Ravel

The French impression of Spanish and gypsy music found a late culmination in the work of Maurice Ravel, whose mother was Basque and whose “second musical homeland” was Spain. In his last two decades composing had become difficult for Ravel, but after an evening in 1922 of listening to the Hungarian-British violinist Jelly d’Arányi play him gypsy melodies in London, he wrote Tzigane for her, with Liszt’s Hungarian Rhapsodies as his model.

The violin begins with a solo lasting around four minutes, nearly half the work, and already in the slow introduction the instrument’s virtuosity seems to approach its limits. When the orchestra enters with a mysterious harp solo, muted horns and a quiet cymbal roll, the proceedings grow even wilder until the solo violin dissects a racy though simple D major theme in 4th harmonics, up-bow sequences and left-hand pizzicatos in which the mode of playing changes from one semiquaver (16th note) to the next!

In La Valse, Ravel’s musical vision is whirled about in an apotheosis of the waltz that pays homage to Johann Strauss. Even today, the shadowy atmosphere and brittle aspect of this music are amazing. The theme takes its time emerging, then, after a monomaniacal build-up, finally collapses into itself. “An imperial court, around 1855” is the setting indicated in the scenario for this score composed for the Ballets Russes. After World War I it was only too clear where the pomp and circumstance of genuine and would-be emperors had led.

Anne-Sophie Mutter has been one of the great violin virtuosos of our time for four decades. Born in Rheinfelden in Baden, she received her first violin lessons when she was five. She later studied at the conservatory in Winterthur under Aida Stucki. She began her distinguished career at the Lucerne Festival in 1976, and the following year, she made her debut with the Berliner Philharmoniker at the Salzburg Whitsun Festival under the baton of Herbert von Karajan. Since then, she has performed all over the world as a concert soloist with the leading international orchestras and as a chamber musician. A particular interest of Anne-Sophie Mutter is contemporary violin music: she has premiered 24 works so far, by composers including Sebastian Currier, Henri Dutilleux, Sofia Gubaidulina, Witold Lutosławski, Krzysztof Penderecki, Sir André Previn and Wolfgang Rihm. In 1978, Anne-Sophie Mutter perfomed with the Philharmoniker in Berlin for the first time, playing the Violin Concerto in G major, K. 216 by Wolfgang Amadeus Mozart, conducted by Karajan. She was the soloist in Vivaldi’s Four Seasons with the Philharmoniker and Karajan at the opening concert of the Chamber Music Hall on 28 October 1987. Her most recent performance with the orchestra in Berlin was in February 2013 with the Romance and the Violin Concerto by Antonín Dvořák, conducted by Manfred Honeck.

In 2008, the artist set up the “Anne-Sophie Mutter Foundation” with the aim of supporting highly talented young musicians worldwide. Together with “Mutter’s Virtuosi”, an ensemble of the foundation’s scholarship students, she undertook a tour of European festivals last summer. The violinist also supports medical and social projects through regular benefit concerts. Anne-Sophie Mutter has received many prestigious awards for her musical activities and her commitment to cultural and social issues, including the Ernst von Siemens Music Prize and the Leipzig Mendelssohn Award. In January 2015, she was named an honorary fellow at Oxford University’s Keble College. She received the Order of Merit of the Federal Republic of Germany, the Bavarian Order of Merit, the Austrian Grand Decoration of Honour, the French “Ordre des Arts et des Lettres” as well as numerous other honours.

Family concert: The Carnival of the Animals