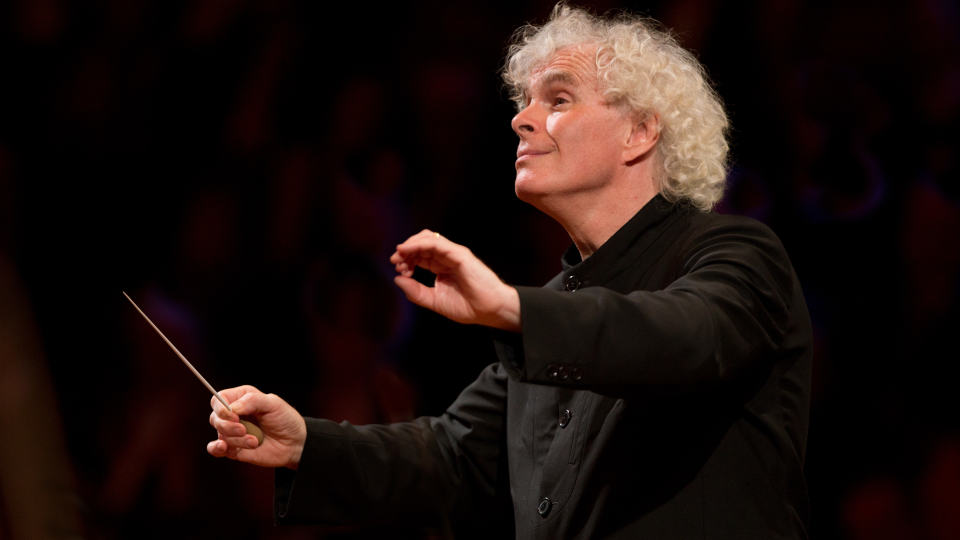 One can hardly imagine an orchestra concert that does without violins completely. Sir Simon Rattle, however, has put together just such a programme, guaranteeing an interesting listening experience. Johannes Brahms believed he heard the symphonic composer Beethoven “marching behind him like a giant”. In 1862, for instance, he wrote to his friend, violinist Joseph Joachim: “After ‘Symphonies by J.B.’ you may for the time being place a ?” By this time, Brahms had long since honed his skills in orchestral setting with other musical genres. After the Serenade in D major op. 11, composed in 1858 and printed two years later, the A major Serenade op. 16, which he worked on at the same time, constitutes Brahms’s second attempt to write an orchestral work of several movements without having to risk direct comparison with the overwhelming figure of Beethoven. These two contributions to the genre by Brahms have little in common, however, with serenades of the old mould. This is evident not only in their playing time, expanded to symphonic proportions, but also in the large orchestra; the instrumentation for the A major Serenade is particularly out of the ordinary as it dispenses with violins. Brahms attained in this way a romantic dark sonority – despite using a piccolo flute in the last of the five movements.

Antonín Dvořák, who was significantly promoted by Brahms, oriented himself much more strongly towards role models from the heyday of the genre when writing his Serenade in D minor op. 44 in 1878 – the work’s wind section seconded only by low strings indeed meets the typical standard for serenades in the 18th century. In addition, this work proves that the individual to whom it was dedicated – the composer and music critic Louis Ehlert – was right when he lauded the “heavenly naturalness” of Dvořák’s music in the Berliner National-Zeitung in 1878: “There is no trace of affectation or artificiality in it.” It was also Ehlert who wrote, referring to the contemporary music of his time: “The men who at present awaken the greatest interest in the sphere of music are so terribly serious. We must study them, and after studying them must buy a revolver in order to defend our opinion of them.”

Understanding music as a means of remembering has been the subject of a number of works by the British composer Mark-Anthony Turnage (b. 1960). His work Remembering – a joint commission of the Berliner Philharmoniker Foundation and the Boston and London Symphony orchestras – was written in memory of the writer and musician Evan Scofield, who died in 2013 at the age of 25. In his work, Turnage remains true to his style, a “distinctive mixture of aggressive and lyrical qualities” (Anthony Burton) evoking fragmented reminiscences of a versatile artist and human being.

Making the Past into Music

Works by Dvořák, Turnage and Brahms

Early in 1878, Dvořák went to Vienna and while there heard the Philharmonic perform Mozart’s B flat Wind Serenade, K. 361. It impressed him so deeply that he returned to Prague with the idea of composing a wind serenade himself, one that would acknowledge both Mozart’s piece and the Czech aristocracy’s bountiful cultivation of the genre. Dvořák’s compositional confrontation with the past took the form of individual serenade movements, some more, some less concretely related to his work’s predecessor. Whereas the opening march is a rather generalized allusion to the musical past, the second movement is clearly linked to the established 18th-century minuet tradition, though not without a hint of Czech inflection. The thoroughly lyrical third movement is directly related to the Mozart serenade, whose haunting Adagio shines through. The finale again evokes Czech local colour, in this case by means of the polka character that the composer often exploited in similar contexts.

Understanding music as a means of remembering has been the subject of a number of works by the British composer Mark-Anthony Turnage (b. 1960): the 2014 orchestral piece Passchendaele commemorates the outbreak of World War I; Martland Memorial (for his late composer-colleague Steve Martland) was recently premiered at London’s Royal Festival Hall by Colin Currie and the Britten-Pears Orchestra under Marin Alsop. Remembering – a joint commission of the Berlin Philharmonic Foundation and the Boston and London Symphony orchestras – is directly related to the idea of making music a medium for memorializing. It was first performed on 19 January 2017 by the London Symphony Orchestra conducted by Simon Rattle. An obvious question is why recollection and memorial compositions occupy such a large place in Turnage’s output. In a 2016 interview with David Allenby, the composer was reserved in his answer: “That’s a very difficult question. I’m aware that if you look at Hibiki, Shroud, Remembering and Martland Memorial, all these recent pieces have memorial aspects. However, it isn’t a conscious obsession. You could say I sense it in the background, both on the classical side, thinking of English composers from Dowland to Elgar, and on the jazz side, with soulful trumpet or saxophone. If you look at funeral bands in New Orleans jazz, it is there on the street. Death is part of life and what makes us human, taking on many different guises.”

Remembering was written in memory of the writer and musician Evan Scofield, who died in 2013. His father, the celebrated jazz guitarist and composer John Scofield, has been a frequent collaborator with Mark-Anthony Turnage, who has said: “I was invited to write a big new piece for the London Symphony Orchestra, Berlin Philharmonic and Boston Symphony – something of a composer’s dream – and, while thinking about it, hard reality woke me up with an unexpected death. I’d worked closely on Blood on the Floor and Scorched with guitarist John Scofield from the mid-’90s and got close to him and the family – his wife Susan, daughter Jeannie and son Evan. So, it was a shock when Evan died of cancer at the age of 25. I’d come to terms with older figures such as Henze or Richard Rodney Bennett passing away, but losing a young guy seemed particularly cruel. Having my own family made me think what it would be like to lose a loved one too early in this sudden way.” That cruelty is especially evident in the fourth movement of Remembering. It is not the typical large, summarizing symphonic finale – the essence of a Turnage (first?) symphony is indeed discernible in this large-scale, four-movement composition – but rather, in the composer’s words, “an expressive ‘Song for Evan’ as if his voice is heard through the orchestra”. Compositionally, Turnage has produced not only a recollection of the deceased but also something that neither photos nor stories about him can generate: the sound of his voice.

In Remembering, Turnage remains true to his style, a “distinctive mixture of aggressive and lyrical qualities” (Anthony Burton). “The aggression is conveyed by sharp, irregular percussive accents... The lyricism, often over an uneasy accompaniment, takes the form of sustained melodic lines with something of the free-floating nature of a jazz solo.” These fragmented reminiscences of a versatile artist and human being are to be listened to in such terms, music in which diversity is as much the subject as the composer’s outrage over young Evan Scofield’s death and the conditions under which we are able to memorialize the dead: in fragments.

Some 30 years before Dvořák, Brahms also grappled with Mozart’s Wind Serenade K. 361. Along the young Hamburg composer’s rocky path to writing symphonies, it offered an opportunity to experiment with orchestral sonorities. In the late 1850s and the 1860s, Brahms’s pressing question was how to develop a large orchestral sound after composing mainly for piano or small chamber forces. Robert Schumann subjected his young colleague to some friendly pressure in 1853 with his article “Neue Bahnen” (New Paths). Brahms was a “chosen one who when he lowers his magic wand where the powers of the masses in chorus and orchestra lend their forces, we may expect even more wondrous glances into the secret world of spirits”. Brahms understood that he was expected to write symphonic works, and he decided to further his compositional development by falling back on the Classical style. During his time in Detmold, he studied the symphonies of Haydn and – procured from his friend, the violinist Joseph Joachim – the serenades of Mozart. Out of these musical explorations emerged a concrete compositional strategy: looking back to the past as an impetus for further development; enlisting the past as a step to shaping the future.

The two serenades created between 1857 and 1859 can be viewed as intermediate stages in this process. Brahms himself wrote of the First Serenade that he “hoped to turn it into a symphony”, though that transformation never materialized. The serenades were thus experiments facilitated by cherished models. One concrete manifestation of this experimental character is that in the A major Serenade, op. 16, Brahms dispenses with violins so that the upper instrumental lines are scored exclusively for woodwind: piccolo (only in the last movement), flutes and oboes. Also, more of the thematic proceedings are entrusted to the wind than the strings, another direct link to Mozart, in whose Wind Serenade only the double bass provides the harmonic foundation. Whereas Mozart’s work is in seven movements, the Brahms is in five though similarly alternating fast and slow. The powerful slow movement comes third (as in Mozart’s serenade and, later, Dvořák’s), followed by a minuet and a quick finale.

The 2017 Europakonzert from Cyprus with Mariss Jansons and Andreas Ottensamer

Simon Rattle conducts “The Gospel According to the Other Mary”

Jakub Hrůša and Frank Peter Zimmermann with a Czech evening