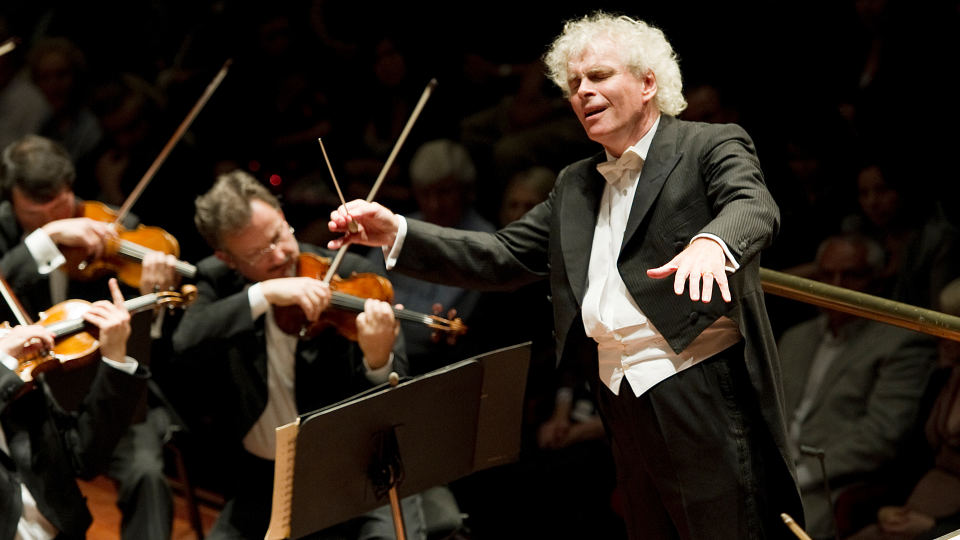 When Gustav Mahler composed his Ninth Symphony, he felt in no way at the end of his life. His health was fine, and with his appointment as chief conductor of the New York Philharmonic, his career had taken an exciting turn. And yet it is hard not to see in this work a kind of musical harbinger of death. Partly because Mahler died a year after its completion, but principally because the character of the symphony is determined by moments of disintegration and dissolution.

The symphony begins tentatively, merging melodic fragments whose structures always remain fragile. In a reversal of the usual symphonic structure, the two slow movements in Mahler’s Ninth are framed by two fast sections. These convey a worldly vigour, but are interrupted by turmoil and despair. The idea, that in this symphony, Mahler captures a premonition of death in music, is fostered especially by the finale. It begins with a sonorous hymn, but contrary to expectations, the symphony does not culminate in a glorious apotheosis, rather the music gradually dissolves and at the end, looking “inquiringly into the unknown” (Theodor W. Adorno).

Mahler’s composing with fragments, however, is good not only as a symbol for the departure from life: It is exactly this fragmentary nature of the Ninth Symphony that has inspired composers from Modernism to the present day. An example of this, performed at this concert, is Helmut Lachenmann’s Tableau from 1989 that oscillates between the emergence and disappearance of sounds, noises and shapes.

The Search for Beauty in a “Deeply Disrupted World”

“We still love and seek beauty, each in our own way”, Helmut Lachenmann remarked in a radio lecture written in 1984 and entitled “Über die Chancen der Schönheit im heutigen Komponieren” (The Chances for Beauty in Composing Today). “But it is precisely our love of the unbroken which betrays our desperate longing for an intact world when we are faced by one that is deeply disrupted, both externally and internally. Today’s composer cannot satisfy this longing by appeasing it with some sort of shimmering aesthetic fata morgana...Only when we intervene in our habitual processes of perception, only then will listening as a perceptual process call attention to itself, to its malleability – only then will the act of listening and, with it, the listener himself be moved.”

Helmut Lachenmann and Gustav Mahler have each opened up a new world of sound and expression in their works, not only questioning the conventions and listening habits of their time but also provoking vehement irritation in their contemporaries. This is impressively documented by both Mahler’s Ninth Symphony and Lachenmann’s orchestral work Tableau, which was written some 80 years later. The two compositions – each in its own way and using differing musical means – deal with the experience of brokenness and disruption, key aspects of the modern world.

In the case of Lachenmann, the search for liberated perception and a new way of listening initially led him to a critical investigation of the existing aesthetic apparatus. During the 1960s he directed his compositional attention to the anatomy of sound as well as to the qualities of energy and expression in sound reproduction. In the works of this period, normal methods of handling sounds were sometimes completely excluded, but beginning in the late 1970s a return to unmanipulated sound can be observed in his music. The composer’s aim has been to cast the familiar in a different light, allowing it to be experienced in new ways.

Alongside toneless blown, stroked, whisked and struck sounds, the timbral palette of the orchestral piece Tableau, dating from 1988/89, also includes traditional materials such as major and minor chords and various scales. However, these are so arranged on the acoustical backdrop that they are unable to produce their traditional effect. A good example of this is found at the end of the transition to the noise-like middle section. After the various instrumental groups gradually dissolve into tonelessness, the strings present a 22-part chord which precedes a general pause. Although the weightless, soft flautando sound can doubtless be identified as an E minor chord, its effect in this context is strange and novel.

“... otherworldly sounds of never before imagined beauty ...” – The Ninth Symphony of Gustav Mahler

In August 1909 Mahler reported to his friend, the conductor Bruno Walter: “I have been most industrious and just put the finishing touches on a new symphony... The score is quite mangled, and probably altogether illegible to unfamiliar eyes. And so I most fervently wish that it may be granted me to produce a fair copy this winter.” Although his wish was fulfilled – Mahler was able to complete the fair copy in New York in the spring of 1910 – it was not granted to him ever to hear his last completed work. It was not until 26 June 1912, a year after the composer’s untimely death, that the first performance of the Ninth Symphony was given by the Vienna Philharmonic under the direction of Bruno Walter.

In the Ninth, Mahler forged a new path. The individual, Janus-faced profile of the symphony is manifested even on the cyclical level. Its disposition in four movements conforms superficially to symphonic compositional convention while simultaneously undermining it by reordering the traditional sequence: the work begins and ends with a slow movement, and Mahler has shifted the fast movements to the middle of the cycle.

Also reflecting this idiosyncratic approach is the formal layout of individual movements. In the vast opening movement, the principles of sonata and double-variation forms are fused into a wholly novel structure, one whose dramatic conception is based on the conflict between two divergent worlds of sound and expression: a lyrical, initially introspective main theme in major and a propulsive, expressively charged countertheme in minor. In the course of the movement, these ideas unfold in alternation, entering into conflict with and influencing each other.

The very beginning of the symphony is also highly unusual. Instead of opening with a grand gesture, Mahler here composes the process of music’s emergence. Within a chamberlike texture, single notes and short melodic fragments are heard in varying instrumental coloration. Although these fragments are most subtly interrelated, their succession and juxtaposition awakens the “impression of being unformed and random. Gradually music comes into being and begins to assume formal organization” (German composer-musicologist Dieter Schnebel). Even the main theme, which enters in the second violins after a few bars, seems to emerge rather than being expounded. Punctuated by numerous pauses, at first feeling its way, the theme develops somewhat longer arcs only towards the end of its two melodic limbs.

The scherzo that follows plays with the processes of alienation and fragmentation. Mahler here brilliantly interweaves three dances: a laid-back C major ländler – “rather clumsy and very coarse” – a fast E major waltz and a second ländler in F major, in which the tempo is decelerated into a kind of slow motion. As the movement progresses, these elements alternate, at times abruptly. The sense of heterogeneity and fragmentation is brought about not only by the juxtaposition of different tempos and types of expression but also by the montage-like conception of form.

The Rondo-Burleske which follows the scherzo creates the same impression. This “virtuoso piece on despair” hurtles past wildly, with “a reckless gaiety, as if at any moment it might plunge into a bottomless void” (Theodor W. Adorno). The final Adagio breaks with the tradition of the affirmative symphonic conclusion. Like the opening Adagio comodo, this free variation movement is based on the juxtaposition of two contrasting expressive worlds. Following an expressively charged opening figure on violins, Mahler introduces the warm string sound of the Adagio’s D flat major principal theme, an idea recalling Bruckner: full-voiced, “always with big tone” and “molto espressivo”. The contrasting theme, which first appears in the form of a brief interpolation at the end of the solemn main theme’s first strophe, moves in completely different realms of sound and expression. Melodic lines in extreme registers weave a bleak contrapuntal fabric. Some of these isolated melodies are marked by Mahler “without feeling” or “without expression”.

A tendency towards dissolution inherent in the contrasting theme eventually encroaches on the main theme. The Ninth Symphony ends not with an apotheosis of the hymnlike principal idea but with its disintegration. Mahler began the work with the emergence of music; he concludes it with music’s silencing and turns his view – in Adorno’s apt formulation – “questioningly into uncertainty”.

Pierre Boulez and Pierre-Laurent Aimard with works by Ravel, Bartók and Boulez