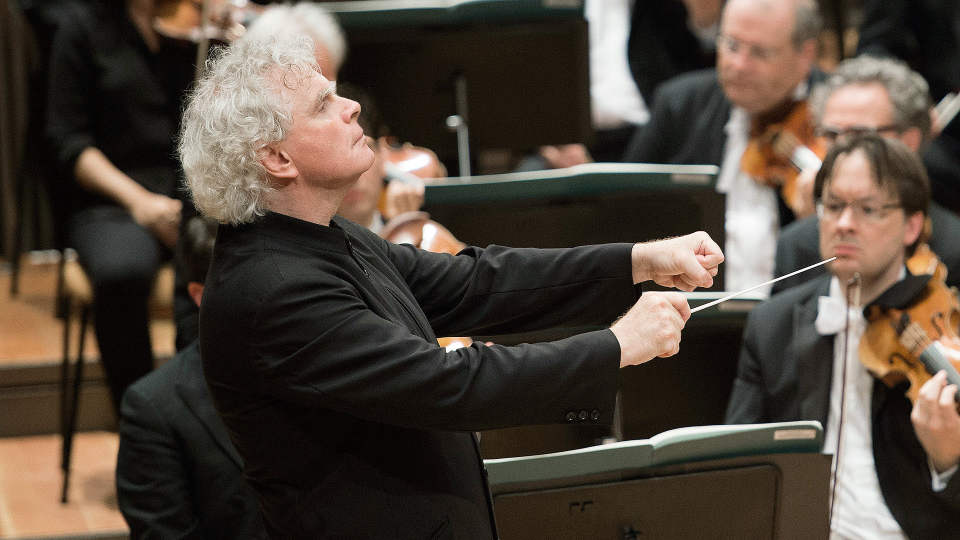 Hitchcock’s thriller Psycho is one of the classics of American cinema. The movie tells the story of the psychopathic serial killer Norman Bates, played by Anthony Perkins, who runs a motel off the beaten track and lives alone with his mother in a Victorian villa right next door. Bernard Herrmann provided the film music. Alongside Erich Wolfgang Korngold and Franz Waxman, he was among the most successful Hollywood composers of this time: the squeaking string glissandi that accompany the famous murder in the shower (The Murder) are guaranteed to give you goose bumps, and have become the often-copied topos for depicting horror in film music.

Sir Simon Rattle programmed Herrmann’s Psycho Suite for Strings followed by the music for Arnold Schoenberg’s expressionist stage work The Hand of Fate. The one-act play, pre-arranged by the “logic of the dream” (Kurt Blaukopf), addresses the artist’s (futile) attempt to establish the spiritual creative element in an uncomprehending material world. The music full of spontaneity and conciseness corresponds with the text in a figurative and associative way – including ostinato sound fields and “colour crescendos”, as well as ever-shifting melodies and a constant stream of new harmonic ideas.

After Schoenberg’s Expressionist depiction of a dream, in which the artist (sung by bass-baritone Florian Boesch) surrenders to the laughter of an invisible crowd, the orchestra play Carl Nielsen’s multi-coloured shimmering pastorale Pan and Syrinx and his Fourth Symphony The Inextinguishable – Nielsen’s Expressionist contribution to the European modern era, in which the composer captured in music “the unquenchable will to live” during the catastrophe of the First World War. The work’s humanist message was understood even at the successful premiere – not least due to the finale, in which a second pair of timpani positioned in front of the orchestra duels with the other pair of timpani before the music concludes in a radiant E major.

“I think I am right”

Arnold Schoenberg knew Carl Nielsen and Bernard Herrmann personally – but their music did not interest him.

They met several times, and they even liked each other. That is not always the case with two such difficult personalities. Arnold Schoenberg was greatly admired by his students; he was an artistic and moral authority but was also quite authoritarian in his claim to infallibility and his austere demeanour – only a few of his contemporaries actually liked him. Carl Nielsen, who came from a rural environment, was also somewhat lacking in charm; his manners were reportedly as rough at times as his music. Both composers enjoyed considerable fame in their own countries: Nielsen as the modern national composer of Denmark, Schoenberg as the modern national composer of Vienna. In the big wide world, however, one was neglected and the other met with hostility, which perhaps explains a certain harshness in their characters.

Nielsen, for example, made no secret of his opinion about his Austrian colleague. At the Festival of the International Society for New Music in Frankfurt in 1927 composers such as Joseph Matthias Hauer and Ernst Toch enjoyed the Dane’s disparaging remarks. Only with the greatest effort, said Nielsen, could he find a few coherent bars in Schoenberg’s works, “and they were by God not good!”

The effect that Nielsen’s verbal attacks produced was for the most part not achieved by his sound attacks. Despite acclaimed performances by the Berliner Philharmoniker Nielsen was never able to emerge from Sibelius’s shadow on the international scene. Only his Fourth Symphony, known as “The Inextinguishable”, did not entirely disappear from the repertoire. Nielsen began the work during his summer holidays at Damgaard in 1914 and completed it in Copenhagen in mid-January of 1916, four and one-half months before the Battle of Jutland. Thus, the composition was not inspired by the First World War, as is often suggested. The fundamental idea – “Music is life, and, like it, inextinguishable” – clearly took on new relevance through the parallel experience of war, however.

On first hearing the Fourth sounds like a monument of ambivalent emotional states. As Nielsen wrote in a programme note, he wanted to celebrate the “elemental will to life”. Its overwhelming vitalism is due in particular to the one-movement formal structure of the work, the endless torrent of sound masses and the dense orchestration. Four sections are clearly distinguishable nevertheless. The principal theme, which erupts with some brutality in the first bar, guarantees cohesion. The brief second movement is a chamber music-like intermezzo, the third a passionate string hymn that swells to an infernal intensity – ecstatic, Gothic, bizarre. The resolution is long in coming. During the finale the timpani persistently interrupt every attempt to escape the forces of destruction, until the inextinguishable will to life, the élan vital, finally prevails triumphantly. In this finale dominated by the timpani contemporary critics at times heard “cows dancing on the floorboards”, at other times “veritable artillery duels”. It was rumoured that the work was an expression of the hatred of the Danes towards the Germans, which had been rife in the Scandinavian country since the German-Danish War of 1864. An utterly absurd allegation – Nielsen always regarded Germany as a stronghold of culture.

Rescued in the Nick of Time: Pan and Syrinx

Pan and Syrinx, a “pastoral scene for orchestra” composed in 1918, displays more of Nielsen’s poetic nature and reveals a certain affinity for Impressionism. Nevertheless, his style can be clearly identified in the wild clarinet runs immediately after the peaceful cello opening, the melodic structure based on persistent repeated notes and, above all, the pursuit, which recalls the tempestuous spirit of the Fourth Symphony. The work depicts how the gods rescue the nymph Syrinx from Pan’s advances in the nick of time by transforming her into a reed.

Struggling with a Crisis: Die glückliche Hand by Arnold Schoenberg

Arnold Schoenberg’s “drama with music” Die glückliche Hand (The Hand of Fate) – completed in 1913 but not premiered until 1924 – is the result of an existential and romantic crisis. In the work the composer came to terms with the affair of his wife Mathilde with the painter Richard Gerstl, which ended in Gerstl’s suicide. The libretto, a kind of expressionistically trivialized Strindberg with nameless characters in the midst of an alienated world, was written by Schoenberg. The figure of the artist is idealized as a prophet in a manner typical of that day. Although the baritone part is precisely written out in the score it cannot be described as either song or speech. The twelve-voice chorus, on the other hand, shows no traces of improvisational treatment. The chief protagonist is clearly the orchestra, whose narrative power and instrumental colour push the singers to the brink during long stretches of the work.

The Rebirth of the Arts through Film

Schoenberg also regarded his drama as a visual work of art: productions of Die glückliche Hand were supposed to use special lighting effects, and Schoenberg even considered a filmed version. In 1927 he still anticipated a “rebirth of the arts” through film. During his exile in California he established numerous contacts with people in the film industry from 1933 onwards, but – as in Nielsen’s case – it seems to have been a one-way street. In any case, we do not know whether Schoenberg was interested in Bernard Herrmann’s orchestral works or film music. Naturally, he was aware of Herrmann’s performance of his own second Chamber Symphony in 1949. In a letter to Herrmann he praised the recording as “very good, convincing and expressive”, without hesitating to criticize the slow tempo in the first movement. “I am sure,” Schoenberg wrote, “if you would try to read this movement now in the tempo which my metronome marks indicate, that everything would fit very well to this tempo. Curiously, Stiedry Fritz Stiedry, who had conducted the first performance of the work also played it too slow. What might be the reason? I think I am right.”

Herrmann was not only one of the most successful film composers of all time but also pursued a long career as a conductor, during which he vigorously championed such underrated composers as Charles Ives and Joachim Raff. Schoenberg, of whom the American music market took little notice, must also have seemed like an outsider to him. He could scarcely have considered Schoenberg an artistic role model, although Herrmann had no qualms about using shrill dissonances if a theme – such as Hitchcock’s Psycho from 1960 – called for them. Herrmann’s colleague Miklós Rózsa commented on his most frequently played score, set for strings and arranged as a 15-minute Narrative in 1968: “It terrified the cinema audience more than all the synthesizers in the world could ever have done.” Schoenberg might have flinched somewhat at this music, and the insane eruptions in Nielsen’s Fourth Symphony might also have shocked him – if he had listened to them with an open mind at least once!

Austrian baritone Florian Boesch is much in demand as one of the leading lieder performers on the concert stages of international music capitals (Wiener Konzertverein, Concertgebouw Amsterdam, Wigmore Hall London, Konzerthaus Berlin, etc.) as well as at prestigious festivals such as the Schubertiade Schwarzenberg, the Edinburgh International Festival, the Oxford Lieder Festival and the Styriarte Festival in Graz. With a historically and stylistically diverse concert repertoire, Florian Boesch is equally successful as a soloist with leading orchestras and in stage works of George Frideric Handel (Radamisto), Wolfgang Amadeus Mozart and Alban Berg (Wozzeck). The baritone, who studied in Vienna under Robert Holl among others, has a regular artistic partnership with Nikolaus Harnoncourt which has included performances of works such as Haydnʼs Creation and The Seasons at the Salzburg Festival. He has also worked together with conductors including Ivor Bolton, Adam Fischer, Philippe Herreweghe, Sir Roger Norrington, Paul McCreesh and Franz Welser-Möst. Florian Boesch first appeared with the Berliner Philharmoniker in October 2011 as soloist in Beethoven’s C major Mass, conducted by Nikolaus Harnoncourt. His last appearance was in April this year in the role of Brander in Berlioz’s La Damnation de Faust, conducted by Sir Simon Rattle.

The Rundfunkchor Berlin(Berlin Radio Choir) is a regular guest at major festivals and the chosen partner of international orchestras and conductors such as Sir Simon Rattle, Christian Thielemann and Daniel Barenboim. In Berlin the choir has long-standing partnerships with the Rundfunk-Sinfonieorchester, the Deutsches Symphonie-Orchester and the Berliner Philharmoniker. The exceptional breadth of its repertoire, its stylistic versatility, delight in experimentation, stunning responsiveness and richly nuanced sound all contribute to making it one of the world’s outstanding choral ensembles. Its work is documented by many recordings and awards, including three Grammy Awards. With its experimental project series, in collaboration with artists from diverse disciplines, the Rundfunkchor Berlin is breaking down the classical concert format and adopting new modes of choral music for a new audience: e.g. the interactive scenic version of Brahms’s Ein deutsches Requiem staged by Jochen Sandig / Sasha Waltz & Guests attracted great attention. With annual activities such as the Sing-along Concert and the “Liederbörse” (Song Exchange) for children and young people or the education programme SING! the choir invites people of various walks of life to the world of singing. Academy and Schola support the next generation of professionals. Founded in 1925 the ensemble was shaped by conductors including Helmut Koch, Dietrich Knothe, Robin Gritton and Simon Halsey (2001-2015). As of the 2015/16 season Gijs Leenars took over as new principal conductor and artistic director. The Rundfunkchor last appeared with the Berliner Philharmoniker in April 2015 in Berlioz’s La Damnation de Faust, conducted by Sir Simon Rattle.

Christian Tetzlaff and the Orchestra Academy of the Berliner Philharmoniker

A Brahms evening with Sir Simon Rattle and Lars Vogt