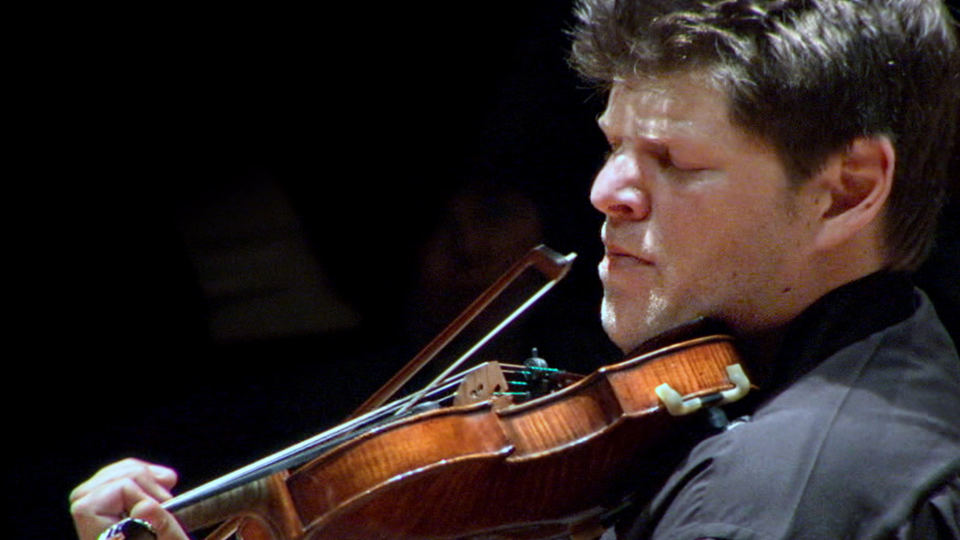 For regular concert goers to Berlin’s Philharmonie (and of course to the Digital Concert Hall) he was a well-known face for many years: Guy Braunstein, 1st concertmaster of the Berliner Philharmoniker from 2000 to 2013. He was regularly to be heard as the soloist in major orchestral works such as Richard Strauss’s Heldenleben or Mahler’s Fourth Symphony. For this concert, Braunstein was the soloist in Shostakovich’s Violin Concerto No. 1, conducted by Semyon Bychkov.

This concerto is one of the composer’s most concentrated works, with its strictness of form and restrained expression. Its particular flavour is won through its similarities to Jewish folk music, with its shifts between cheerfulness and anguish. Folkloristic influences are also to be found in the first piece of the evening, the Symphonies of Wind Instruments from Stravinsky’s “Russian phase”, which we also have to thank for the ballets Petrushka, The Firebird and The Rite of Spring.

Second comes Schoenberg’s tone poem Verklärte Nacht. The composer himself reported that, at the time of its first performance, it seemed to the audience “as if an orchestra playing Wagner’s Tristan und Isolde had got confused and their playing had fallen apart.” Today, on the other hand, the work is widely regarded as one of the most powerful masterpieces of the modern age.

Between Strictness and Sensuousness

The Symphonies d’instruments à vent (Symphonies of Wind Instruments) represent a double homage by Igor Stravinsky: to Claude Debussy and to music of the 17th century. In 1920 the French periodical Revue musicale approached a number of composers with a request to provide short pieces for a special issue in memory of Debussy, who had died in 1918. A piano version of the last section was published in a supplement to the magazine in December 1920 as a “fragment” of the Symphonies pour instruments à vent à la memoire de Claude Achille Debussy. A few months later, in June 1921, at the Queen’s Hall in London, Serge Koussevitzky conducted the premiere of the first version of the complete work, which Stravinsky subsequently reworked twice: rescoring the concluding Chorale in 1945, for a CBC performance, and revising the whole score in 1947.

The appellation “Symphonies of Wind Instruments” is misleading. Stravinsky is using the concept of a “symphony” here in its original sense: as symphōnein (συμφονειν), the “sounding together” of different voices. At the same time, the title of the work refers to the sinfoniae associated with such Baroque composers as Claudio Monteverdi and Giovanni Gabrieli.

The composition consists of 17 short, clearly demarcated sections, in related, mostly measured tempi. These structures are “laid out in the manner of the lines of a chorale, and are set off from and contrasted with one another through the use of thematic material, movement, tonal colour and phrasing” (Peter Andraschke). The work’s strictness of construction and sound, as well as a certain astringency, do not make for easy listening. Stravinsky himself wrote in his Chronicle: “I did not, and indeed I could not, count on any immediate success for this work. It lacks all those elements that infallibly appeal to the ordinary listener, or to which he is accustomed. It is futile to look in it for passionate impulse or dynamic brilliance. It is an austere ritual which is unfolded in terms of short litanies between different groups of homogeneous instruments. … I fully anticipated that the cantilena of the clarinets and flutes frequently taking up their liturgical dialogue and softly chanting it would not prove sufficiently attractive for a public which had so recently shown me its enthusiasm for the ‘revolutionary’ Rite of Spring. This music is not meant to ‘please’ an audience, nor to arouse its passions. Nevertheless, I had hoped that it would appeal to some of those persons in whom a purely musical receptivity outweighed the desire to satisfy their sentimental cravings.”

In September 1899, while on holiday at Payerbach am Semmering (Lower Austria), Arnold Schoenberg composed his string sextet Verklärte Nacht (Transfigured Night) op. 4, a work still wholly conceived in the spirit of late Romanticism. In 1916 he reworked it for string orchestra, and revised this version in 1943. Schoenberg’s inspiration was a poem by Richard Dehmel. In Dehmel’s text, a woman, while walking through a wood on a cold, moonlit night, confesses to her lover in despair that she is carrying the child of a another man. But the man opens his heart and tells her that their love will transfigure the stranger’s child into his.

It is possible to understand Verklärte Nacht as being both absolute and programmatic music. Schoenberg himself emphasized in no uncertain terms that the work is “programme music, illustrating and expressing the poem of Richard Dehmel”, but that, at the same time, it is “different from other illustrative compositions, firstly by not being for orchestra, but for a chamber group; secondly because it does not illustrate any action or drama, but was restricted to portray nature and to express human feelings. It seems that due to this attitude my composition has gained qualities which can also satisfy if one does not know what it illustrates, or in other words, it offers the possibility to be appreciated as ‘pure’ music.”

Formally, the single-movement work follows its literary model’s division into five strophes. Like the poet’s, Schoenberg’s concern is not with superficial or external drama but with the portrayal of internal conflicts. Thus each of the five sections of the work has a different expressive character: three shorter sections depicting the lovers walking and the atmosphere of the natural landscape around them (I, III and V) frame two longer episodes containing the couple’s dialogue. The second strophe describes the woman’s mental state, while in the fourth the man reveals himself: he comforts his lover, forgives her, accepts the child and speaks of the splendour that the woman has brought into his life.

Verklärte Nacht begins mysteriously – quiet, almost inaudible, and at a slow pace – then takes on increasing movement, expression and agitation. Intensifying sequences build up only to end pianissimo. Although the original version for six strings conveys the work’s full expressive content, the opulent version for string orchestra, intoxicating and morbid by turn, is a perfect example of what the Germans call “Nervenmusik”: music that gets under one’s skin.

In 1947, 14 years after completing his Concerto for Piano, Trumpet and String Orchestra op. 35, Dmitri Shostakovich undertook the composition of his second instrumental concerto: the Violin Concerto No. 1 in A minor. The score was finished in March and dedicated to David Oistrakh, but the violinist recommended postponing its first performance, scheduled for the following year. He had good reason: in February 1948 the Central Committee of the Soviet Communist Party issued a decree concerning the situation of Soviet music in which a number of composers, including Shostakovich, were accused of “formalist and decadent” tendencies. After setting the concerto aside, Shostakovich took several years before resuming work on it and completing the orchestration. For the premiere in October 1955 in Leningrad, with Oistrakh and the Leningrad Philharmonic conducted by Yevgeny Mravinsky, he undertook some further revisions.

Shostakovich’s First Violin Concerto – it was followed in 1967 by a distinctly less formidable Second – is symphonically laid out as four movements in classical sequence (Moderato, Allegro, Andante, Allegro con brio). The slow movements (I and III) unfold lyrically, while the quicker ones (II and IV) are marked by such features as wide intervallic leaps, passages of double- and triple-stopping and glissandi through fifths and octaves.

The introductory Moderato bears the title Nocturne. It is a lyrical, melancholy movement, imbued with stillness, which develops in a flow of broad melody. Second comes a three-part Scherzo (Allegro): extremely vivacious, colourfully scored, highly polyphonic and with the grotesque features one often finds in Shostakovich. Oistrakh saw here something “evil, demonic and piercing”, and the Shostakovich biographer Sofia Chentowa even called the movement a “dance of despair”.

There follows a Passacaglia (Andante), whose 17-bar theme is repeated nine times as counterpoints develop in various instruments and sections. Emerging from the pianissimo ending of the movement is an extended solo violin cadenza, which leads to the concluding Burlesque (Allegro con brio). This turbulent, rumbustious movement with folk echoes has a dancelike main theme. At its climax, the Passacaglia theme returns once again in canon. In the original version, the solo violin launched the finale directly after the strenuous cadenza, but during rehearsals a week before the premiere, Oistrakh asked the composer for a little respite in order to mop his brow. Shostakovich reworked the beginning of the finale to begin with an orchestral tutti. The delayed premiere and the revision of the score led to its long being erroneously designated and published as Op. 99, rather than 77, as the composer wished.

Semyon Bychkov, born in Leningrad, was a pupil of Ilya Musin at the Leningrad Conservatoire. In 1973, he won First Prize at the Rachmaninov Conducting Competition. Since leaving Russia in 1975 and moving to the USA, he has enjoyed a career taking him from New York’s Mannes College of Music to engagements for international opera productions (eg. in Milano, Hamburg, Paris, Vienna, London, Chicago, New York, at the Salzburg Festival and Maggio Musicale in Florence), as well as concerts with some of the greatest orchestras in the world. Bychkov was appointed Music Director of the Orchestre de Paris (1989–98), Principal Guest Conductor of the St Petersburg Philharmonic (1990–94) and of Maggio Musicale in Florence (1992–98). Starting with the season 1997/98, he became Chief Conductor of the WDR Sinfonieorchesters Köln, a position he also held at the Dresden Semperoper from 1999 to 2003. Since his debut with the Berliner Philharmoniker in 1985, stepping in for Riccardo Muti at short notice, Semyon Bychkov has returned several times for guest conducting engagements. His most recent visit was in October 2008, when he conducted works by Detlev Glanert and Richard Strauss. His recording of Shostakovich’s Symphony No. 5 with the Berliner Philharmoniker was the winner of the Belgian Caecilia Award and Stereo Review’s “Record of the Year”.

Guy Braunstein was born in Tel Aviv and started learning the violin at the age of seven. In his training as a professional musician, he was taught by, among others, Chaim Taub, Glenn Dicterow and Pinchas Zukerman. Braunstein’s first contact with the Berliner Philharmoniker was in 1992 – as one of the soloists in Beethoven’s Triple Concerto conducted by Zubin Mehta. Before becoming First Konzertmeister in the Philharmonic in September 2000, he had also collaborated as a soloist with other leading orchestras (such as the Israel Philharmonic Orchestra, Tonhalle-Orchester Zürich, Bamberger Symphoniker) and conductors like Vladimir Fedoseyev und Daniel Barenboim. In 1995, for example, he gave the world premiere of Shifting, a concerto for violin and orchestra composed for him by Rolf Riehm. In addition to his work with the Berliner Philharmoniker, Guy Braunstein is a committed member of Daniel Barenboim’s West-Eastern Divan Orchestra and equally active as a chamber musician. Since 2006, he is Artistic Director of the Rolandseck Festival in Germany.

Alan Gilbert and Emanuel Ax in works by Mozart and Stravinsky