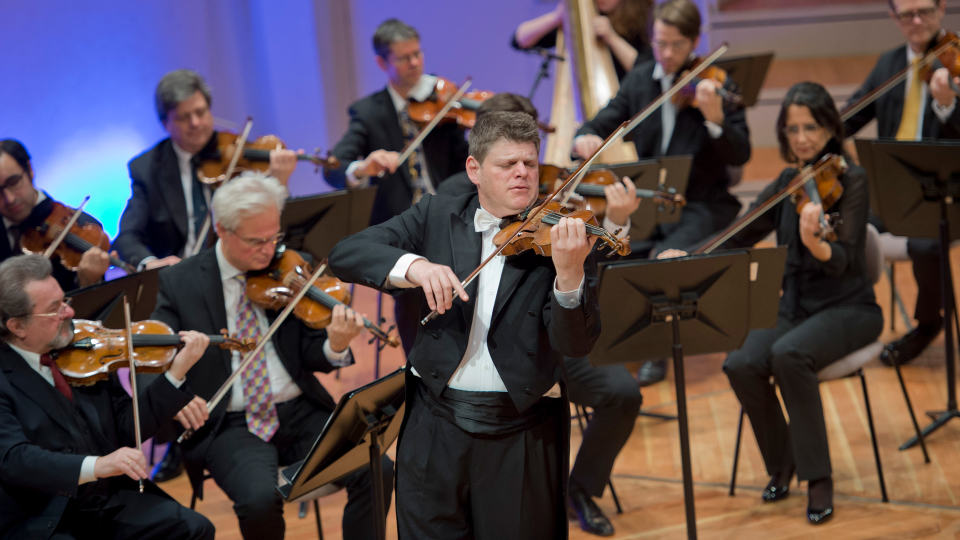 A special concert for a special occasion: On the 70th anniversary of the liberation of Auschwitz, musicians of the Berliner Philharmoniker played on violins which had once belonged to victims of the Holocaust. This project was made possible by the Israeli violin maker Amnon Weinstein who has collected and restored these instruments over many years.

Each has its own moving story: the violin played by Guy Braunstein – former first concertmaster of the Berliner Philharmoniker who returned to the orchestra for this concert – belonged to a prisoner in Auschwitz, while other instruments had accompanied Jewish musicians on their flight to Palestine. For Amnon Weinstein, these violins are like memorials: “Each instrument is like the tombstone for a missing grave, for bodies that were burned to ashes and that they denied a burial.” But at the same time, they are also symbols of hope – so he gave his collection the name “Violins of Hope”. Through the medium of music, the violins should “convey a message to the younger generation: Never again, anywhere,” says Weinstein.

The programme of the concert reflected the variety of emotions of the event: The grief, the hope, and the remembrance. Sir Simon Rattle conducted the Adagietto from Mahler’s Fifth Symphony, Guy Braunstein played Bach, the Israeli cellist Zvi Plesser performed Max Bruch’s Kol Nidrei, which is based on a Hebrew prayer, and there was the première of the commissioned work, Violins of Hope by the Israeli composer Ohad Ben-Ari. Actor Ulrich Matthes read texts, including by the Auschwitz survivor Elie Wiesel who vividly expressed in words the significance of music to the camp prisoners. The concert opened with a speech by the German Federal Minister for Foreign Affairs, Frank-Walter Steinmeier, the patron of the concert.