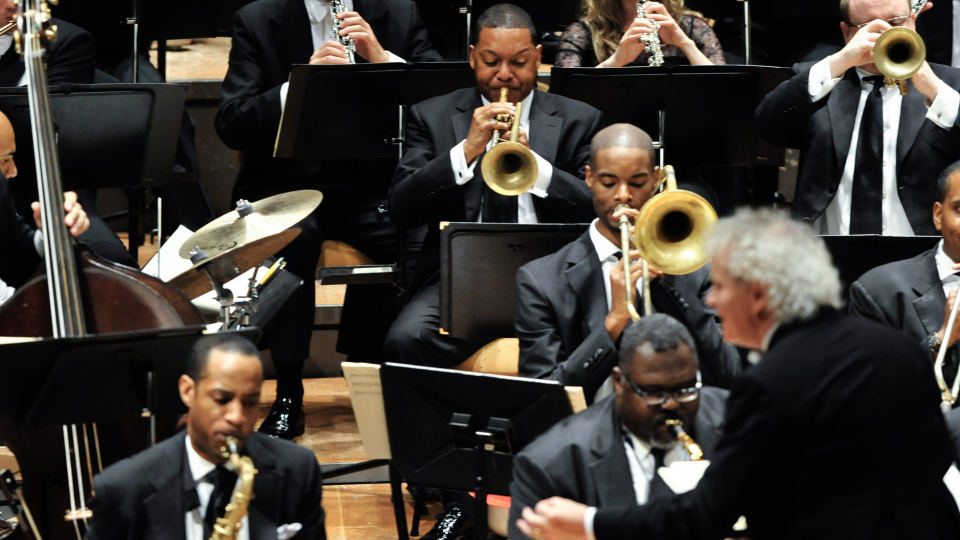 At the 1983 Grammy Awards, trumpeter Wynton Marsalis was honoured both as a jazz and a classical musician, something unique at that time. An outstanding ability in both genres has been his trademark to this day, as can be heard to great effect in this concert in which, together with his band, the Jazz at Lincoln Center Orchestra, he premieres his Swing Symphony with the Philharmoniker conducted by Sir Simon Rattle.

Commissioned by the Berliner Philharmoniker Foundation, this composition is Marsalis’s third symphonic work. With this piece his intention was no less than to trace the long and rich history of jazz. Just how spectacularly he succeeded could be read in the Hamburger Abendblatt: “Fast and furious bebop phrases delivered faultlessly by the violins; tricky brass passages with perfect timing and no stiffness: a lot of first-class musicians had a load of fun with this and each other.” This concert performance was followed by yet another exciting interpretation as part of the Berliner Philharmoniker’s Education Programme which is also available in the Digital Concert Hall.

There is, on the other hand, a premiere in this recording with Simon Rattle’s interpretation of Stravinsky’s ballet music Petrushka. Together with the Berliner Philharmoniker, Rattle has often performed other scores by the composer – Le Sacre du printemps in particular – and this with tremendous success. This concert was the first time they played this work together, the story of the ill-starred Petrushka who first loses the object of his affection and then his life at a Russian Shrovetide fair.

It would make a good film scene: on an afternoon in February, trumpeter/composer Wynton Marsalis sits on the sofa of his living room – with its superb view across New York – and sings me half the history of jazz with infectious enthusiasm while outside a blizzard whirls through the city. Marsalis happily shifts from one style to the next, bobbing in time and pleased by my enjoyment of this little journey through the jazz story. In fact, it’s only a little foretaste of his new composition, which he has written for the Berliner Philharmoniker and his own Jazz at Lincoln Center Orchestra. Here the composer retells the story from his personal perspective. Its title, Swing Symphony, is descriptive – for Marsalis, the history of jazz essentially coincides with that of swing, in the spirit of the Duke Ellington standard “It Don’t Mean A Thing If It Ain’t Got That Swing”.

In his new musical epic, Marsalis draws upon the richness and variety of styles and trends he sees as part of the swing tradition. The mambo, bebop, Charleston, slow tango and Kansas City swing are only some of the many dance types that reverberate through Swing Symphony. In Marsalis’s view, featuring the various stages of its history in a composition from the year 2010 corresponds exactly to the nature of swing itself: “My piece follows the evolution of swing to the modern, to the current time. And the attitude of the piece is that all the eras of swing are always present. Every moment of it is a modern moment. It is perpetually new; it revives itself; it’s a timeless rhythm. A swing rhythm doesn’t age.”

The title Swing Symphony and the scoring already indicate the impressive challenge that Marsalis set himself with this journey through the history of jazz. It is, in the end, a meeting of two extremely different formations when the Berliner Philharmoniker and the Jazz at Lincoln Center Orchestra play together, even though Marsalis initially emphasises what they have in common. He views the fundamentals of jazz such as harmony and form within the European classical tradition. Nonetheless the two orchestras embody western European classical art music on one hand and North American jazz on the other. Only with “great caution” can such diverse ensembles meld, as Marsalis well knows: “The division of labor: That’s the issue. When you have large forces like two orchestras you have to be very clear. Otherwise it’s too chaotic and complex. The reason why things normally don’t work with jazz orchestras and classical orchestras is that the different groups of instruments don’t fit together.” It is indeed easy for the sections to collide. Whereas in jazz there is a rhythm section, often in the classical orchestra this role can even be taken over by the strings. “The identity of our music is in the rhythm section,” Marsalis continues. “When they’re not playing, it doesn’t sound like jazz. So we have to play in a groove, in a swing. The classical orchestra doesn’t do that.” The American composer admits that no one has yet worked out how to unite a jazz orchestra and a classical orchestra so that both maintain their identity in the creation of an artistically convincing work. But that is precisely what appeals to him about his new composition: “As another attempt, I want to try to figure some other ways how they can work together. The challenge for me it to make it sound like it’s swinging. That is my objective.”

Igor Stravinsky and the Ballet

The remarkable musical advances in the ballet genre that came about in Paris after 1910 owe much to a unique constellation of artists and circumstances. At the heart of this development was the founder and impresario of the Ballets Russes, Sergei Diaghilev, who possessed an extraordinary knack for stimulating the creation of significant works and initiating artistic collaborations. In 1909, his first commission to Igor Stravinsky, then only 27, laid the foundation not only for the composer’s long connection with Diaghilev’s company, which lasted until the impresario’s death in 1929, but also, and more importantly, for his subsequent fame. His ballet The Firebird made the young composer famous overnight in 1910 and provided him with an entrée into Paris’s most stimulating intellectual and artistic circles.

Immediately following this triumph, Stravinsky began work on a concertante piece for piano and orchestra, which would eventually turn into his second ballet. “In composing the music,” he recalled, “I had in my mind a distinct picture of a puppet, suddenly endowed with life, exasperating the patience of the orchestra with diabolical cascades of arpeggi. The orchestra in turn retaliates with menacing trumpet-blasts. The outcome is a terrific noise which reaches its climax and ends in the sorrowful and querulous collapse of the poor puppet.” Stravinsky named him after Petrushka, “the immortal and unhappy hero of every fair in all countries”.

Although composed as music for a ballet, Petrushka is no less effective in the concert hall. In works like Stravinsky’s for the Ballets Russes, categories became interchangeable – there were no distinct boundaries between them. When Stravinsky increasingly mixed genres, styles and traditions, he was developing one of the most important principles of his aesthetic. Petrushka was, in fact, the work in which he found himself as a composer and discovered his own, unmistakable language. For the first time he made significant use of a technique that would become characteristic of his subsequent music, a principle that can best be described as modular. He created little cells and motifs, which are expanded, truncated, reaccentuated, combined and layered. Instead of the traditional development or extension of themes, he employed the experimental approach of assembling them mechanically into a mosaic, working as though “wielding scissors” and juxtaposing motifs with cuts – as in film editing. The prototype of this process is found in Russian folk music, which – in addition to ballet – had a decisive influence on Stravinsky’s compositional process.

Petruskha owes its powerful impact not least to Stravinsky’s extraordinary richness of invention, which he fully displayed in the ballet’s four tableaux. His originality is by no means diminished by the incorporation, at times literal, of Russian folksongs, waltzes and popular tunes. On the contrary, the radical modernity of Stravinsky’s music also derives from his appropriation and interpretation of this utterly heterogeneous foreign material from the past. Other major works would follow Petrushka in Stravinsky’s long career and exceptionally varied oeuvre, yet as early as 13 April 1912, his friend and colleague Claude Debussy would write: “You may well surpass Petrushka, but you can already be proud of what you’ve achieved with this work.”

Wynton Marsalis is one of the most highly respected as well as successful jazz musicians and composers of his generation; as a creative spirit, educator and advocate for the arts with a great sense of social responsibility, he is also one of the most outstanding artistic personalities of our time. Born in 1961, he started his classical trumpet education when he was 12; he also gained valuable experience in the funk, jazz and marching bands in New Orleans. He was accepted by the Juilliard School in New York in 1979 and later left school to join Art Blakey and the Jazz Messengers. His 1982 recording debut with this band was followed by more than 60 recordings of works from the worlds of both jazz and classical music; in 1983 he was the first musician to be awarded a Grammy in both classical and jazz categories simultaneously. Wynton Marsalis has worked with many leading symphony orchestras such as the New York Philharmonic Orchestra, the Los Angeles Philharmonic Orchestra and the Czech Philharmonic Orchestra. His compositions include the Oratorio Blood on the Fields (which won him the Pulitzer prize for music in 1997) and his first two symphonies All Rise (1999) and Blues Symphony (2009). Wynton Marsalis is co-founder of the programme Jazz at Lincoln Center in New York, and artistic director of the Jazz at Lincoln Center Orchestra. Musical education for children is something he feels particularly strongly about: at the Lincoln Center, he introduced the popular Jazz for Young People Concerts as well as regular public readings and film series on the subject of jazz. He has received honorary doctorates from numerous universities and colleges; he was appointed as a UN Messenger of Peace and is a member of the French Legion of Honour. As guests of the Foundation Berliner Philharmoniker, he and the Jazz at Lincoln Center Orchestra made their first appearance in the Philharmonie at the beginning of March 2001. He was also heard in three concerts conducted by Claudi Abbado which included parts of Marsalis’s symphony All Rise. His Swing Symphony is the basis for this year’s Zukunft@BPhil Dance Project, one of the Berliner Philharmoniker’s education programmes, which will take place in the Arena Berlin in Treptow on the 12 and 13 June.

The Jazz at Lincoln Center Orchestra is a union of excellent jazz musicians and has been the ‘resident orchestra’ at the Lincoln Center in New York for almost twenty years. With their artistic director Wynton Marsalis, they are dedicated to keeping alive the memory of the styles, the composers and the performers of former times with classic works from jazz history. They also perform numerous premieres and commission works from such stylistically diverse exponents of the current jazz scene as Benny Carter, Joe Henderson, Joe Lovano, Freddie Hubbard, and last but by no means least, Wynton Marsalis himself, all of whom play a major role in the work of the ensemble. Outside New York, the Jazz at Lincoln Center Orchestra performs all over the United States as well as at major concert venues worldwide; they perform at dance events, in jazz clubs, public parks and churches. The ensemble regularly works with symphony orchestras, ballet companies, student groups, and an ever-growing list of soloists and guest conductors.