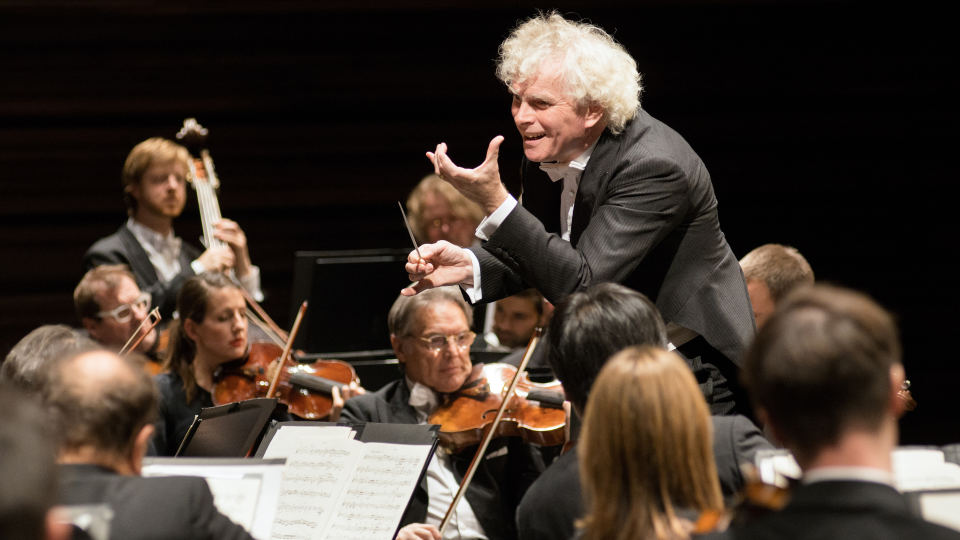 Probably no other German composer embodies the essence of musical Romanticism as perfectly as Robert Schumann. This is evident in his emotional, sometimes unstable character as much as in his works. Simon Rattle conducts two of these in this concert: the “Rhenish” Symphony and the Overture to Genoveva.

In a highly artistic distillation, Schumannʼs Third Symphony reflects the restless spirit of this age: a hopeful enthusiasm, but with repeated flashes of disturbance and depression. And the typical contemporary nostalgia for better times can also be found here in the archaic fourth movement, entitled “Feierlich” (solemn), which at the same time forms a contrast as a warmly lit oasis of tranquility in the shimmering sweep of the symphony.

Like Schumannʼs only opera Genoveva, the works of Henri Dutilleux also lead a shadowy existence in the music scene. Unjustly so, as shown by his Correspondances for soprano and orchestra, premiered in 2003 by the Berliner Philharmoniker under Sir Simon Rattle. The soloist in this work, which can boast of an almost Romantic sense of tonal colour, is the versatile Canadian soprano Barbara Hannigan – long familiar on the stage of the Berliner Philharmonie as a specialist in contemporary music.

Three Unrecognized Masters of the Moderne

Sandwiched between the revolutionaries Schoenberg and Stravinsky on one side and Nono, Boulez and Stockhausen on the other, the “1914 generation” was left with only third place in the official historiography of music. Even the greatest artistic creativity could not change the opinion of an academic community that had long since awarded all the prestigious titles. The three more traditional grand masters of this generation – Dmitri Shostakovich (born in 1906), Allan Pettersson (1911) and Benjamin Britten (1913) – were unsuitable for the eulogies of the elitists anyway, and the three progressives – Olivier Messiaen (1908), Witold Lutosławski (1913) and Henri Dutilleux (1916) – acquired the reputation they deserved only belatedly, if at all.

There is no piano concerto by Henri Dutilleux, and, at the age of 97, it is unlikely that he will write one. Dutilleux composed the orchestral song cycle Correspondances “letters” or “correspondences” in 2002/2003 on commission from the Berliner Philharmoniker. The texts, by Rainer Maria Rilke, Aleksandr Solzhenitsyn, Vincent van Gogh and Prithwindra Mukherjee, all revolve around the cosmos. Each of the five movements displays striking colouristic features, and the use of the instruments is to be interpreted metaphorically. The gong represents the world of man; the tam-tam, with its ambiguous harmonics, the cosmos, which transcends the human sphere. The accordion, on the other hand, heard for the first time during the interlude preceding the Solzhenitsyn movement, evokes the Gulag prisoners, for whom this was at best the only instrument available. The fact that Vincent van Gogh makes his appearance among the authors of Correspondances should come as no surprise. In his orchestral work Timbres, espace, mouvement (1978), Dutilleux had already “set” Van Gogh’s painting The Starry Night to music. For Dutilleux, colour, light, the universe and religiosity belong to one and the same spiritual dimension.

Robert Schumann’s position among his contemporaries was more or less equivalent to that of Dutilleux and Lutosławski today. Several of his works, the symphonies, for example, were very well received, but at no time was he regarded as the greatest living composer. His only opera, Genoveva, failed miserably; the premiere in Leipzig in 1850 was a disappointment. Genoveva suffers from its shallow oratorio style and heroic chorales, but even more from Schumann’s own libretto. His decision to replace the tragic denouement chosen by Tieck and Hebbel with a happy ending proved to be a fatal mistake. In doing so, he passed up the opportunity to depict the legendary key scene of the Genoveva story with dramatic effect, as Adrian Ludwig Richter captured it in his famous painting: the Countess hid with her child in a forest cave, where she remained for seven years, nourished by a doe, until her husband found her. In the overture, however, which the composer had already presented to the Leipzig public during a concert at the Gewandhaus four months earlier, we learn everything about Genoveva’s fate in the seclusion of the forest, her longing and the emotional agitation of a woman unjustly cast out.

Due to the postponement of the Leipzig premiere of Genoveva, the Schumanns did not arrive in Düsseldorf until September 1850. The work as municipal music director proved to be extremely positive at first. In October Schumann composed the Cello Concerto in A minor, which was never performed during his lifetime, within 14 days. In early November he began work on the Symphony No. 3 in E-flat major, op. 97, the “Rhenish”, and finished the orchestration in only five weeks. Its premiere the following February was the greatest public success of his last years.

Because of the popular character of the “Rhenish” Symphony, Schumann’s tremendous virtuosity and the progressive stylistic devices he used have often been overlooked. The exuberant but majestically restrained principal theme of the first movement is a masterstroke of the first order; it is set over the bar lines, out of sync with the three-four metre, as it were, giving it an enigmatic character. The second movement Scherzo is far from an innocuous ländler a German folk dance; the feeling of “leisurely Rhenish life” is only superficial. Although we rock back and forth on the waves for a long time, after the trio the theme is heard only in fragments, as though from afar, and the remaining tranquillity is finally disturbed by the brass – village musicians would not behave that way, even while intoxicated! A romantic masterpiece par excellence follows, tarrying between hesitant ländler and wistful nocturne; it serves to set the stage for the impressive entrance of the solemn fourth movement. The contrast is overwhelming! In only seven minutes – if that – Schumann creates an aura of archaic, sacred grandeur.

And the carnival? Schumann had not experienced it yet in 1850, which of course also applies to the years 1834/1835, when he composed his piano cycle Carnaval op. 9. It is possible to hear the finale of the Third Symphony as a glorification of Rhenish joie de vivre. It makes more sense to assume that the message is political and philosophical, however, since the ecstasy has more to do with magnificence than madness. The finale is as unwilling to be content with depictions of actual events as the other movements; it is the vision of freedom which had to come eventually – a vision that could only appear in this guise because Germany’s most beautiful Romantic landscape and its greatest Romantic composer came together.

This encounter brought no happiness for Schumann personally. In February 1854, on Rosenmontag, the Monday before Lent, he threw himself into the river from a bridge over the Rhine, was rescued by fishermen, then lived for two more years at a mental asylum in Bonn, where his condition deteriorated. His love for the Rhine came to a tragic end, dark forces had the last word, and folksy exuberance proved to be an illusion. Did Schumann foresee this end? In 1840 he set Heinrich Heine’s poem Berg’ und Burgen schaun herunter Mountains and castles gaze down to music. The text describes the Rhine as follows:
With friendly greetings and promises
The river’s splendour beckons;
But I know it – gleaming above
It conceals within itself Death and Night. (Translation: Richard Stokes)

Barbara Hannigan was born in Canada and studied at the University of Toronto with Mary Morrison, the Royal Conservatory of The Hague with Meinard Kraak and privately with Neil Semer. She performs with leading orchestras and specialist ensembles around the world (the Philharmonic Orchestras of New York, Los Angeles, Helsinki and Oslo, London Symphony Orchestra, Cleveland Orchestra, Orchestre National de France, Ensemble Intercontemporain, Ensemble Modern, London Sinfonietta and others), and since 2006 the singer has performed on many occasions in Berliner Philharmoniker concerts, most recently in a late night concert last December with works by Henze and Walton (in the latter also as conductor). Esa-Pekka Salonen, Pierre Boulez, Sir Simon Rattle, Jukka Pekka Saraste, Ingo Metzmacher, Susanna Mälkki, Jonathan Nott and Michael Gielen are among the conductors she works with. Barbara Hannigan is best known for her interpretations of contemporary music. She was involved, for example, in the opera world premieres of Louis Andriessen’s Writing to Vermeer, Jan van de Putte’s Wet Snow, Gerald Barry’s The Bitter Tears of Petra von Kant and Pascal Dusapin’s Passion. The artist’s past and current artistic partnerships with composers include those with György Ligeti, Luca Francesconi, Karlheinz Stockhausen, Peter Eötvös, Oliver Knussen and Henri Dutilleux. Barbara Hannigan has been widely acclaimed as an interpreter of works by György Ligeti (Mysteries of the Macabre, Aventures and Nouvelles Aventures, Requiem). In October 2012 the singer made her role her debut as Lulu at the Théâtre Royal de la Monnaie in Brussels. In addition to her opera and concert activities, she regularly gives lieder recitals with the pianist Reinbert de Leeuw.