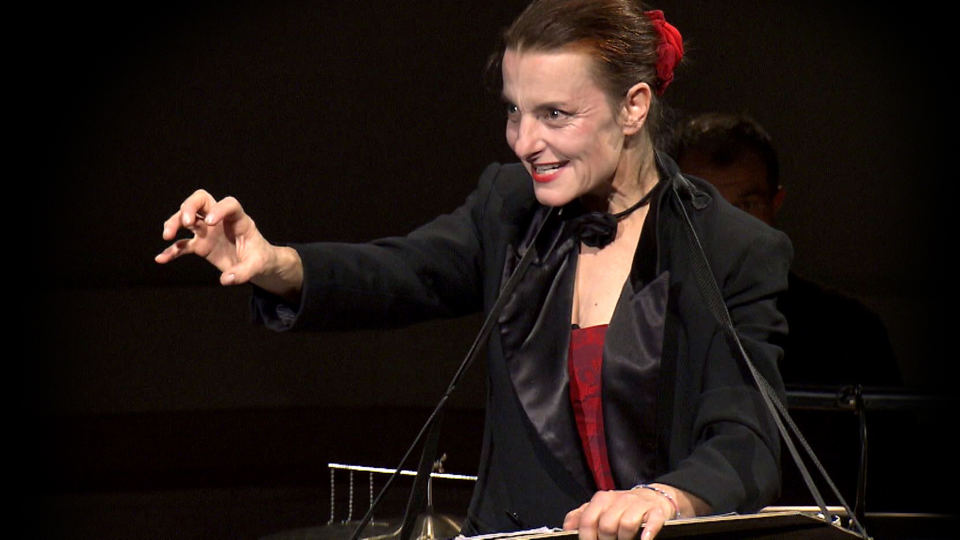 The celebrations for the 25th anniversary of the Chamber Music Hall of the Philharmonie in Berlin had many highlights. One of which was undoubtedly an appearance by Isabel Karajan, eldest daughter of Herbert von Karajan who had opened the Chamber Music Hall as the conductor of Vivaldi’s Four Seasons in 1987. Isabel Karajan has made an outstanding name for herself as an actress and gave a demonstration of her skills and versatility for this anniversary as the narrator in Stravinsky’s Histoire du soldat.

Stravinsky’s stage work about the soldier who makes a fatal pact with the devil has a particular cabaret charm of its own. Composed at the beginning of the 20th century, it incorporates many forms of popular music of the time, from the march to the tango to ragtime. The most prominent role in this performance is the narrator who takes on all three of the main roles in the piece, moving with virtuosity between the various idioms of narrator, soldier and the devil. The members of the Berliner Philharmoniker under the direction of Stanley Dodds were responsible for the musical element of the evening and bring both the popular and edgy side of the score to the fore as well as its many sophisticated details.

The artists had already performed the Histoire du soldat in this form at the Salzburg Festival in April 2011, which was received enthusiastically by the press. The Salzburger Nachrichten wrote: “Isabel Karajan changes character effortlessly … and is not afraid to attack each dramatic situation head-on. Played with artistry by members of the Berliner Philharmoniker under the direction of Stanley Dodds, the sophistication of the music provides a sharp contrast to this lively, tongue-in-cheek narrative technique.”

Seiji Ozawa conducts a Russian Night at the Waldbühne