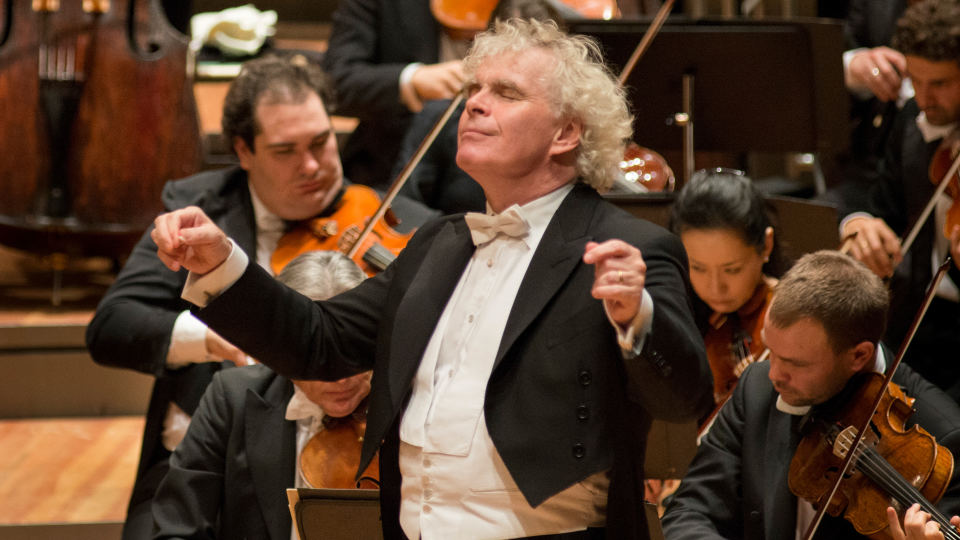 This concert by the Berliner Philharmoniker under its chief conductor Sir Simon Rattle could be headlined “magical sounds”. Especially in its first half, the programme brings together music by composers who truly were sorcerers with sound. In the Prelude to Act I of his romantic opera Lohengrin, Richard Wagner in 1848 characterised the rarefied world of medieval Grail knights with iridescent music of a sort never heard before.

Then half a century later, French composers played with new instrumental colours and, in an illusion to contemporary painting, were promptly labelled “impressionists”. Claude Debussy’s Jeux and the second suite from Maurice Ravel’s ballet Daphnis et Chloé are two of the most beautiful examples of French music of that period. Finally, the Hungarian composer György Ligeti, who made his international breakthrough in 1961 with the orchestral work atmosphères, occupies a special position in the second half of the 20th century as an avant-gardist whose incredible aural imagination even fascinates people who otherwise have an antipathy to New Music.

After so much musical magic, Robert Schumann’s Third Symphony would seem to be at a disadvantage – after all, its creator was often cited for struggling with orchestration. But this prejudice has long since been dispelled, thanks not least to historically informed performance practice. And so there will also be new colours to discover in Schumann’s Rhenish.

We know the term from astronomy: “atmosphere”, according to the Greek derivation, is that gaseous formation of vapour (atmos) that surrounds a sphere (sphaira), however formed, be it a heavenly body or our planet earth. Just how imaginatively this phenomenon can be moulded in musical form and language is demonstrated by György Ligeti’s nine-minute-long orchestral work atmosphères. Given its premiere in autumn 1961 at the Donaueschingen Musiktagen, atmosphères unfolds as a radical net-like structure – not the least radical in that even the tiniest increment of part-writing is notated in minute detail. Yet there is an inherent paradox in how the work is perceived: lacking any hint of figuration, rhythmic construction or melodic turns, its graphic complexity is barely audible. The form consists entirely of transformations of tonal colouring and volume.

Ligeti’s biographer Wolfgang Burde concludes that atmosphères confronts the listeners “with musical mountain ranges whose beauties seem to belong to a time spirited away from time itself”. Shortly before the end, the music turns momentarily to something almost conversational. The sound masses crumble, the individual sound processes seem to “individualise” themselves (Burde) by means of deliberate accentuation, and an entity that has been inherently hermetic now seems capable of breaking apart. Just after this “procedure” begins, however, the music towers up mightily one last time into a mountain of sound that has already been heard in the beginning and middle of the piece. The ending surprises: the static clusters thin out in tranquillity and atmosphères closes as pure, increasingly breathlike sound. Still audible are the brass’s quietly compressed respiration, the strings’ undulations, glissando harmonics that register as echoes, as well the sound of a piano that gradually fades into nothingness.

When angels sing: the Prelude to Richard Wagner’s Lohengrin

The music of every symphonic poem appears to start here – out of the nothingness with which Richard Wagner’s opera Lohengrin begins. Hearing these sounds, one can imagine how music of the ether must sound. There are no deep “earth” tones. The violins sing in harmonics in the highest register, softly and with utmost tenderness, an instrumentation devised specifically for this prelude whose boldness is still astonishing. In order to give the impression of the fragile, the barely utterable, Wagner gives four individual violins each a solo part and divides the remaining violins into “four equal parts” – which means that the violins play in eight parts in presenting the so-called Grail Motif.

This opening generates the prelude’s great intensity before the increasing prominence of the other strings, as well as of the wind and then the brass, causes the music to converge on the second important motif. Against a soundscape fluctuating between D major, A major and F sharp minor, set in “oscillation” by tremoli and striking quaver (eighth-note) steps in the bass, there now appears, bathed in light, the motif of the untouchable, unquestionable hero: the knight Lohengrin. His arrival alters the (sound-)world, but only for a few moments. Gradually the music returns to the mood of the beginning, back to its ethereal (atmo-)spheres.

A breath of angelic lightness can still be felt in some passages of Debussy’s “poème dansé” Jeux, premiered in 1913 at the Théâtre des Champs-Élysées in Paris as the score to Vaslav Nijinsky’s ballet of the same name. As in La Mer and Ibéria Debussy organises his musical discourse out of initial, strictly defined intervals, without its attaining tangible thematic character. As the piece progresses, additional thematic ideas – free of any tonal rooting – take form: tenderly delicate webs of sound that emerge and quickly fade, as do the music’s harmonic and – even more – its rhythmic contours. The dominant principle is suggestion – of nuances and volatile emotions that can be ironic, nervous, tender or passionate, as if any given state of being (aural and psychological) is constantly being papered over by another. The resulting impression is that of an orchestral palimpsest that undermines the classical conception of an orchestra. In short, Jeux, perhaps the most modern work that Debussy ever produced, is a gracious, elegant sound painting – albeit not tangibly polyphonic or polytonal – whose enormous appeal lies in its individual colours, which seem to be concealed behind a veil while still generating a “pure” sound.

A year before Debussy’s Jeux, Ravel’s “symphonie chorégraphique” Daphnis et Chloé had its premiere. The score’s elegance is brilliant and nervous in equal measure. In sharp contrast to Jeux, the outbursts possess an elemental, at times even existential, force. In depicting these eruptions, Ravel had something specific in mind, as he stated in his Esquisse biographique: “When I wrote Daphnis et Chloé, my intention was to compose a vast musical fresco, less scrupulous as to archaism than faithful to the Greece of my dreams, which inclined readily enough to what French artists of the late 18th century imagined and depicted.” In his score, Ravel concentrates this idea in an allegory of the dance, serving Mikhail Fokine’s ballet of the same name as well as – distilled into the three-part form of Suite No. 2 – leading to a rapturous existence at the edge of the abyss.

When Schumann took up his new position as music director in Düsseldorf, it was already common knowledge that he was dangerously close to the dark side. He was to be granted only a few more years in the rational world before shadows dimmed his thoughts and emotions. Schumann’s “Rhenish” is nevertheless a thoroughly high-spirited public avowal of an optimistic existence; it is, one might say, a last breath of springtime feelings. As described by the composer in a letter to the publisher Simrock, the symphony was meant to reflect “perhaps a slice of life here and there”. There is also in the “Rhenish” a frame of mind deriving from Schumann’s private mood that could be summed up in the words of Friedrich Hölderlin: “Come into the clearing, my friend”. In the course of the fifth movement, the symphony strives repeatedly to leave private feeling behind. Schumann’s wife Clara is no longer the addressee of this music. “Popular elements should prevail, and the result, I think, has been a success”, conceded Schumann, according to his first biographer Waldemar von Wasielewski.

The basic tone (apart from the slow movement, a solemn, elegiac song headed “Feierlich”) is unambiguously cheerful, buoyant and dance-like. It already pervades the striking main theme, which is hardly affected by the lyrical darkenings of the secondary ideas. The scherzo, which comes second, is garbed as a comfortable Ländler, affirmatively disposed. The brilliant finale brings no further “word” of the preceding movement’s sanctified atmosphere. Sheer Rhenish joie de vivre prevails virtually throughout. The friend has indeed come to that place which Schumann had envisioned: into the clearing.

2005 Europakonzert from Budapest with Simon Rattle and Leonidas Kavakos

Zubin Mehta and Murray Perahia with works by Beethoven and Strauss