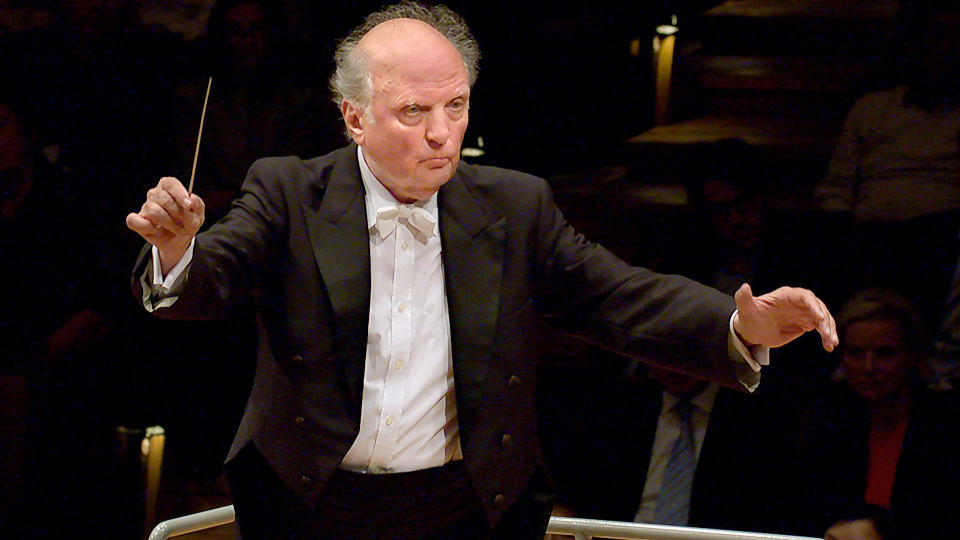 When Marek Janowski, at the end of December 2016, gave his final two concerts in his capacity as chief conductor of the Rundfunk-Sinfonieorchester Berlin in the Konzerthaus at the Gendarmenmarkt, the audiences had mixed emotions: sadness, because it meant saying goodbye for the moment to a conductor who had repeatedly provided the musical life of the capital with striking highlights during his 14-year tenure in Berlin; and happiness, because the Berliners knew that Janowski would continue to remain loyal to them – including, of course, as a guest conductor with the Berliner Philharmoniker with whom he has had artistic ties since 1976. In addition to the three orchestral preludes from Hans Pfitzner’s opera Palestrina, a work premiered in 1917 and totally committed to the late Romantic idiom, Janowski has programmed one of Anton Bruckner’s most popular symphonies, his Fourth, which was composed in 1874 and which by 1880 had undergone multiple revisions.

Bruckner himself once called the Fourth the “most understandable” of his works, but he also tried to describe their music by linguistic means. For example, Bruckner once noted: “In the first movement of the ‘Romantic’ Fourth Symphony, the intention is to depict the horn that proclaims the day from the town hall. Then the town comes to life; in the Gesangsperiode, the theme is the song of the bird, the great tit Zizipe. 2nd movement: song, prayer, serenade. 3rd: hunt and in the Trio how a barrel-organ plays during the midday meal in the forest.” According to other sources, Bruckner was imagining a “medieval city” at “dawn” and “forest murmurs” during the composition of the first movement, and while working on the second movement, on the other hand, a “boy in love” and his unsuccessful attempt to “climb through his sweetheart’s window”.

There are numerous other examples of Bruckner’s attempts at pictorial descriptions of his music. However, the fact that there is no definitive “programme” for the Fourth from Bruckner himself raises the suspicion that the composer had only made tongue in cheek attempts with his written remarks to make it fit in with the so-called New German School, an aesthetic movement (driven by Liszt and Wagner) which was all the rage during his lifetime. That might also explain why Bruckner, when asked to explain the final movement of the Fourth, is said to have replied: “Well, I never knew myself what I was thinking!”

Music in the Conflict Between the Artist and the World

Tends Toward the Past: Hans Pfitzner’s Three Preludes from Palestrina

The “purely intellectual life of mankind consists in its advancing knowledge through sciences and in the refinement of the arts, both of which slowly continue across the ages and the centuries, and to which the individual generations bear their contribution as they pass by. This intellectual life, like an ethereal adjunct, ... hovers above the bustle of the world, above the real life of the nations, which is guided by the will; and alongside the history of the world there proceeds the history of philosophy, of science and of the arts, guiltless and untainted by blood.” Hans Pfitzner prefaced his opera Palestrina, which had its premiere 100 years ago, with these lines from Arthur Schopenhauer. The conflict of the artist who must struggle against the adversities of a hostile reality had shaped the literary topos of the composing genius since the 18th century.

Pfitzner’s first stage direction for Palestrina leads to a realm of asceticism: “A room in Palestrina’s house. The room is not large, rather gloomy, with dark old furniture. Simple almost to the point of poverty. In the middle of the room there is a worktable, strewn with unused manuscript paper.” The story takes place in 1563, a year which is significant for church policy; the Council of Trent is in the midst of a fierce dispute over a radical reform of liturgical music. Conservative clergymen believe that the textual comprehension of masses is so impaired by the polyphonic style that they want to ban it from the liturgy. In Pfitzner’s version, which does not entirely correspond to reality, Giovanni Pierluigi da Palestrina is already over 50 at that time and, according to the legend, he involuntarily becomes the messianic mediator of the conflict. Cardinal Borromeo commissions him to compose a mass which will prevent the ban. Palestrina wearily refuses. He is not the right man for such a task. During the night, however, the old Flemish masters appear and urge him to fulfil his “earthly mission” and save the work of his artistic forebears. Angels dictate a mass to him, which he writes down in a trance, as though transported.

The second act depicts the “worldly bustle” of the Council and thus forms a contrast with the two outer acts, which concentrate on the artistic figure of Palestrina. In the third act Palestrina’s “rescue mass” is performed and achieves the desired effect – the Council members decide against a radical ban, and the composer is euphorically acclaimed by the crowd. Palestrina silently turns his back on the world, however, and sits down at the organ.

Pfitzner found a late Romantic musical idiom for the legendary material, for which he wrote the libretto himself. Because of the frequent use of early church modes, contrapuntal part-writing and archaic cadential formulas the opera evokes the style of the 16th century, at the same time making use of the compositional resources of its day, however. The melancholy opening of the first prelude already demonstrates the particular effectiveness of this synthesis of styles. The second prelude, which introduces the turmoil of the Council, is to be performed “with force and ferocity”. Powerful rhythmic energy and extreme chromaticism show that the first section is music of “reality”, while the second is dominated by an archaic religious character. The third prelude opens with a deeply melancholy gesture. Expanses of sound, the strokes of a clock and chamber music-like intimacy in places pave the way for the refined, ascetic atmosphere of the opera’s conclusion. In his Betrachtungen eines Unpolitischen Reflections of an Unpolitical Man Thomas Mann aptly observed that the thematic structure in Palestrina represents the exact reversal of Richard Wagner’s Meistersinger: Wagner celebrates the “apotheosis of the new”, whereas in Pfitzner everything “tends toward the past”.

The longings of Anton Bruckner, whom music historiography depicted for many years with the clichéd image of an awkward, naïve eccentric and devout “musician of God” from the provinces in a hostile, intellectually dominated Viennese society, were realistic by comparison. With complete confidence Bruckner sought public recognition for his works. In addition, he applied several times for a position at the University of Vienna in the hope of a secure existence. The conservative partisans of Johannes Brahms and Eduard Hanslick, who set the tone in Vienna, did not make things easy for him, however. When the Fourth Symphony, which Bruckner himself referred to as “Romantic”, had its first performances in 1881, the conservative critic Max Kalbeck fiercely attacked it: “We believe as little in the future of the Bruckner symphony as in the victory of chaos over cosmos.” Bruckner as enfant terrible, a futurist threat at the close of the 19th century!

Bruckner was in the habit of revising his works several times since, contrary to the zeitgeist, he did not regard his compositions as an opusperfectum et absolutum but rather as work in progress. He composed the first version of his Fourth Symphony in a creative frenzy in 1874, immediately after finishing (for the time being) work on the Third. During the following fourteen years he revised the “Romantic” Symphony several times – partly because he himself discovered flaws (“too many imitations”), partly because he was advised to do so by his friends and students, who occasionally lent a hand themselves. The most radical changes were extensive cuts and new compositions of the Scherzo and Finale for the second version from 1878/80. It was obviously extremely important to Bruckner that the musical proportions of his expansive symphony have an architectural order.

Bruckner mentioned to several friends a kind of programmatic sequence of images as inspiration for the “Romantic”. At the beginning the horn announces daybreak from the tower of a medieval city, later a titmouse chirps. In the second movement a serenade or prayer is heard, while the Scherzo depicts a hunting scene and the Finale (in the first version) represents a fair. Bruckner’s musical idiom does not become lost in romantic sentimentality or nostalgic recollections, however. Instead, it is dominated by an exciting atmosphere of optimism due to the enormous waves of intensification characteristic of Bruckner and – particularly in the first movement – highly chromatic passages.

Like the Third, the Fourth Symphony begins with a creative process, at the start of which a natural interval is heard as the nucleus. The dotted fifth horn call will dominate all four movements as a protagonist with rich contrapuntal playing and ensure the inner order of the symphony. A funeral march rhythm accompanies the lyrical cello theme in the second movement. An expansive string chorale, which corresponds most closely to the prayerlike character mentioned by Bruckner, joins seemingly aimlessly advancing chains of chords. The powerfully pulsating Scherzo, in which the triplet theme is juxtaposed against the underlying two-four metre, is ingenious. The delicate Trio, in three-four metre reminiscent of a folk song, forms an effective contrast. An essential element of Bruckner’s music is revealed in microcosm here, namely the natural juxtaposition of sublime grandeur and an unpretentiously down-to-earth character. The composer had the most problems with the Finale. He discarded the first version in favour of an entirely new composition of the movement (1878/80), which also underwent revisions, made for the most part by his student Ferdinand Löwe, before going to press in 1889. Löwe suggested extensive cuts in the engraver’s copy, which Bruckner, fearing for his “exact” order, commented “should be used only if absolutely necessary, since they are very detrimental to the work”.

Marek Janowski is one of the great masters of the music of the German tradition. From 2002 to 2016 he was Artistic Director of the Rundfunk-Sinfonieorchester Berlin and his Wagner opera cycle with the orchestra in Berlin in 2012 and 2013 was held to have set a new standard of performance in concertante opera. In 2016 and 2017 Janowski conducted Wagner‘s Ring Cycle at Bayreuth.
Born in Warsaw in 1939, Janowski grew up in Germany and studied violin and piano as well as conducting in Cologne. His artistic path led him from assistant positions in Aachen, Cologne, Düsseldorf and Hamburg to his appointment as General Music Director in Freiburg im Breisgau (1973-75) and Dortmund (1975-79). Marek Janowski’s guest conducting took him to all major orchestras in the USA and in Europe as well as to leading opera houses. There is not one world-renowned opera house where he has not been a regular guest since the late 1970s. Marek Janowski stepped back from the opera scene in the 1990s to concentrate on the great German symphonic repertoire. Between 1984 and 2000, as Musical Director of the Orchestre Philharmonique de Radio France, Marek Janowski took the orchestra to a position of pre-eminence in France, as well as abroad. From 1986 to 1990, in addition to his position in Paris, Janowski was Chief Conductor of the Gürzenich-Orchester in Cologne. From 2000 to 2005 Janowski served as Music Director of the Orchestre Philharmonique de Monte-Carlo, and from 2001 to 2003 he also held the position of Chief Conductor with the Dresdner Philharmonie. He made his debut with the Berliner Philharmoniker in 1976 and last conducted the orchestra in January 2017 in Verdi’s Requiem.