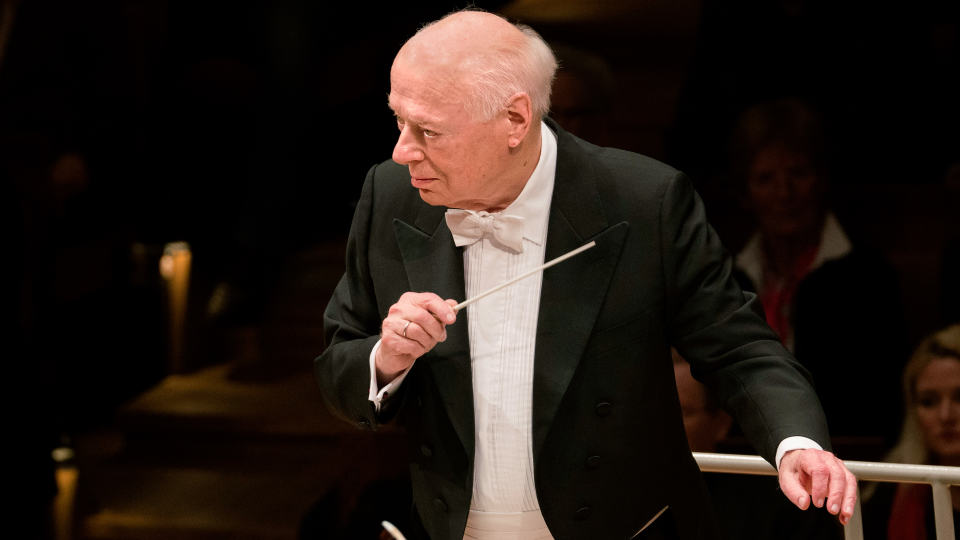 When Bernard Haitink was appointed chief conductor of the Concertgebouw Orchestra in 1961, the Mahler tradition in the Netherlands, begun by Willem Mengelberg, had long since faded as a result of Nazi dictatorship and World War II: “He Mahler was forbidden in my country until 1945. ... There was no more Mahler tradition, and the music was really new. I remember that Erich Kleiber performed the Third. But that was much later.” Despite this background, Bernard Haitink made a significant contribution to the Mahler renaissance which began in the early 1960s and which earned him the reputation of an outstanding Mahler conductor: “Mahler”, he says, “has always troubled me because he doesn’t validate you.”

A partner of the Berliner Philharmoniker for many years, the Dutch maestro now conducts Mahler’s Ninth Symphony, a work of an exceptional nature: even Bruno Walter described the first movement of Mahler’s last completed symphony as “a tragically harrowing, and noble paraphrase of that feeling of farewell”. In the second movement, we then hear shadowy forms of a variety of dance modes, described by Dieter Schnebel as ʻcomposed ruinsʼ. The brittle music, which sometimes takes on demonically grotesque characteristics, culminates in a wild “Danse macabre”, in which the violins – like the solo violin in the Totentanz Scherzo of the Fourth – have to play “like fiddles”. This is followed by a Rondo-Burleske of agitated bustle whose raging tornado “takes the mild irony of the Fischpredigt Scherzo from the Second Symphony and raises it to a level that is barely tolerable” (Jens Malte Fischer). The finale, with its characteristic turn motif, offers no apotheosis. Instead, what is heard is an expansively sung Adagio which employs “his whole arsenal of vocables expressive of grief from Mahler’s tonal language” (Hans Heinrich Eggebrecht). The final part, played only by strings “with heart-felt emotion”, ends in a dying ritardando.

No wonder that the key analyses of the symphony since the posthumous premiere have revolved around concepts such as “farewell” and “death”. Given the many emotional moments, according to Haitink, the work offers great challenges: “For Mahler, it is important that you get the dynamic nuances right, so that not everything is a hotch-potch in mezzo forte. ... Karajan once said that there is only one climax in a piece, and how important it is not to use all your ammunition at once. So you have to pace yourself ....”

“When my love has her wedding day, I shall have my day of mourning” are the opening words of Gustav Mahler’s early cycle Lieder eines fahrenden Gesellen(Songs of a Wayfarer). In it the protagonist bids farewell to his sweetheart, who is marrying another man. “Farewell” is the title of the last movement of the Lied von der Erde(Song of the Earth) – composed 25 years later and, like the Ninth Symphony, premiered after the composer’s death – in which the human voice is heard for the last time in Mahler’s music. The theme of farewell, which implies an uncertain new beginning, is a characteristic element of the composer’s oeuvre from beginning to end.

Mahler’s last four works seem to be a compendium of last words and sounds, a look back and a look forward. The Eighth Symphony has the character of an assessment, almost a testament because of its unmistakable references to Beethoven’s Ninth; both Mahler’s Eighth and the last movement of the Ninth call for monumental forces, feature oratorio elements and draw on texts from Weimar Classicism. The Lied von der Erde – which was subtitled “Symphony”, although the term was not included in the official generic catalogue out of superstition about the ominous number nine – was followed by his last completed work, which he finally dared to number as the Ninth, and the Tenth Symphony, his final, uncompleted work. The thinking about Mahler’s musical legacy thus concentrates particularly on the topic about which Arnold Schoenberg said: “It seems that the Ninth is a limit. He who wants to go beyond it must pass away.”

The four-movement structure of the Ninth Symphony could suggest Mahler’s return to the tradition of the genre after his previous bold experiments. The sequence of the movements does not have a precedent, however, even in his own works. Two slow movements frame two fast ones, although the latter obviously draw on the scherzo form. All that remains of the Classical-Romantic tradition are the “subordinate parts of the symphony” (Habakuk Traber), the models of the slow movement and scherzo, both of which occur twice. In the Ninth Symphony they articulate programmatically the central and contrasting expressive elements in Mahler’s music: the tragic and the trivial, the withdrawn and the all too human, the elegiac and the crude.

The first movement begins with the single note A, played by the cellos, accented on the first beat in a dotted rhythm, answered by a delayed, syncopated echo in the low horns. The strains of the harp follow, falling like drops, countered with a signal motif in the stopped high horns. The interval of a third introduced by the harp is eventually transformed into a murmuring accompaniment figure in the violas. The initial motif of the first theme then begins: a yearning, descending whole-tone step referring back to the key of D major, which appears frequently during the movement. It is conspicuous that here – as in the introductory section – the third beat is omitted, as though the music, exhausted by expression, must continually catch its breath. The sadly tranquil first theme in D major is followed by an insistent second theme in D minor, which soars upwards in several attempts. As the cataclysmic climax of the movement shows, the developments introduced in the opening section also prove to be structural elements. The trombones play the irregular rhythm of the beginning, which Mahler marked “with the greatest force”; the timpani enters with the motif introduced by the harp at the opening, played fortissimo. A funeral march is heard (“like a solemn funeral procession”), followed by the extremely unconventional recapitulation. After a cadenza-like, incredibly free duet by the horn and flute, the movement comes to a close with a section in which fragments of the first theme are played by the solo violin and the whole-tone motif is articulated one last time by the oboe. As at the beginning, a single note is heard at the end, without chordal accompaniment: the D as the root of the tonic answers the A as the root of the dominant. Mahler may again be quoting in almost abstractly reduced form the harmonic tension that is resolved in traditional sonata form.

The next movement provides the greatest possible contrast, with two Ländler framing a waltz. A dancer would quickly stumble here, however, since the introductory passage is one beat too short. The material of the first Ländler is conventional but is split into its individual parts and rearranged. Theodor W. Adorno recognized in this passage the “first exemplary case of musical montage, characterized both by its quotation-like themes and by its decomposition and lopsided reunification”. The waltz, marked by wide intervals and “wild vulgarisms” (Adorno), is followed by a second Ländler, which, like the first theme of the symphony, begins with a descending whole-tone step and gives an impression of tranquillity that is quite strange in this context. A variant of the opening, broken up into fragments, concludes the movement, which dies away in pianissimo.

The title of the third movement sounds innocuous enough: Rondo-Burleske.Anyone who is familiar with the treacherous ambiguity of Mahler’s humour will not expect light-hearted relief at this point, however. The “joke” is reflected in the contrast between the obviously superficial musical content and the extremely elaborate compositional treatment, particularly in the many fugal passages – in the “collision” of the “rigorous movement with a theme that cannot be called anything but trivial” (Mathias Hansen). The Rondo comes to a close after a vehement acceleration, the only movement of the symphony which does not end quietly but fortissimo.

Beforehand, however, in an interposed episode, Mahler presents the figure of the turn, which becomes the signature of the Adagio that concludes the symphony. In a turn, the main note is played twice in alternation with the two auxiliary notes above and below it. The figure, which is traditionally used as an ornament, is played in the opening bars by the violins, before all the strings enter in a continuously flowing hymn with rich subordinate voices. The melody line repeatedly anticipates the first beat in syncopation at the climaxes, as though it could not wait for its regular entrance. The thinly orchestrated, hesitantly tentative second theme is intended as a contrast but also contains the turn motif; the ornament dominates until the final bars of the work, which explore the threshold of the void.

Leonard Bernstein suggested a programme for the symphony, about which Mahler himself said little. The asymmetrical rhythm with which the composition begins represents the irregular heartbeat that the composer himself detected with anxiety; in the two-syllable opening motif of the first theme Mahler calls out “Lebwohl” (farewell) to the listener. The movements of the work are actually like “four ways to say farewell”: the first is a farewell to love, the second to country life, the third to urban society and, after the final outbursts, the Adagio is ultimately a farewell to earthly life itself.

Whatever one may think of this interpretation or the opinions Bernstein expressed elsewhere, Mahler’s Ninth Symphony looks ahead to the catastrophes of the 20th century, both in its grotesque and its sorrowful passages. It is difficult to dispute that the irresistible fascination of this music is due to its dual character of farewell and new beginning.

Bernard Haitink looks back on a conducting career lasting over 60-years. Born in Amsterdam in 1929, Bernard Haitink started his career with the Netherlands Radio Orchestra, first as violinist, then from 1957 as its director. He was at the helm of the Royal Concertgebouw for 27 years (1964 – 1988), and subsequently held posts as music director of the Royal Opera House Covent Garden (1987 – 2002), the Dresden Staatskapelle (2002 – 2004) and as principal conductor of the Chicago Symphony Orchestra (2006 – 2010). In addition, he was principal conductor of the London Philharmonic (1967 – 1979) and music director of the Glyndebourne Festival Opera (1977 – 1988). His close artistic partnership with the Berliner Philharmoniker started more than five decades ago: in March 1964, he made his debut with the orchestra with a Beethoven programme. Bernard Haitink was awarded the Hans-von-Bülow-Medal by the Berliner Philharmoniker in 1994 and named their honorary member in 2004. He is also committed to the development of young musical talent, and gives an annual conducting masterclass at the Lucerne Easter Festival. Bernard Haitink has received many international awards in recognition of his services to music, including both an honorary Knighthood and the Companion of Honour in the United Kingdom, and the House Order of Orange-Nassau in the Netherlands. He is conductor laureate of the Royal Concertgebouw Orchestra and conductor emeritus of the Boston Symphony, as well as an honorary member of the Chamber Orchestra of Europe. His last concerts with the Berliner Philharmoniker were in October 2016 when he conducted works by Schubert and Mahler.