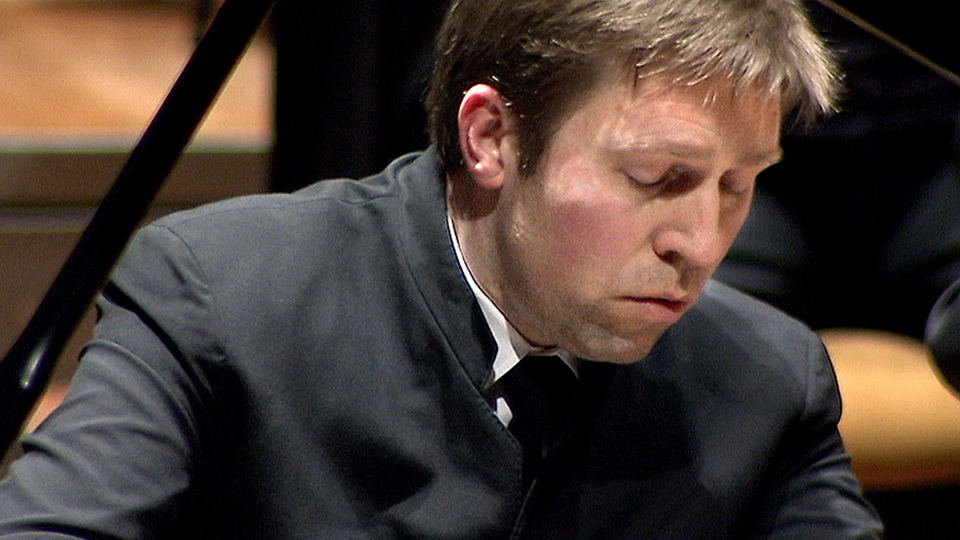 In the 2010/2011 season, the Philharmoniker family grew to include a regular visitor: Leif Ove Andsnes who, as Pianist in Residence, worked together with members of the Berliner Philharmoniker in chamber music concerts and also appeared as a soloist. This concert from March 2011 was the highlight. Together with conductor Bernard Haitink, Andsnes performed Johannes Brahms’s Second Piano Concerto, considered by many pianists and music lovers as the epitome of heavyweight late Romantic warhorses. However, among the thundering on the keyboard, an exquisite, sometimes delicate, sometimes pastoral tone emerges. How well Andsnes uncovered these deeper layers in the performance documented here is shown in a comment by American National Public Radio, according to which, the soloist played the work “with a combination of authority and humility,” which “allowed the music's architecture to build”.

At the beginning of the concert, the orchestra and the audience remembered the victims of the earthquake and the nuclear disaster in Fukushima in Japan a few days previously. To that end, in a change of programme, they played Witold Lutosławski’s elegiac Funeral Music for string orchestra, originally composed in memory of Béla Bartók. Lutosławski’s Fourth Symphony from 1992 which followed, is a work of retrospection, in which Lutosławski – two years before his death – reviews once more all the techniques of his long, productive life as a composer. This multiform symphony was performed by the Berliner Philharmoniker in this concert for the first time.

As an expression of their deep sympathy with the people of Japan the orchestra and Maestro Haitink have decided to change today’s programme: instead of Anton Webern’s Im Sommerwind they will play Witold Lutosławski’s Musique funèbre for string orchestra.
Due to the short notice of this alteration, there is no detailed explanation of this work in the programme notes.

Lutosławski and Brahms in search of new sonorities

Dodecaphony, the “method of composition with 12 notes related only to each other”, as used by Schoenberg and by Webern in his later works, was only one of many sources of inspiration for Witold Lutosławski. It can be found operating in his Musique funèbre (1954–58), which in spite of its virtually mathematical construction offers a wealth of beautiful, often novel yet always deeply felt sonorities. Lutosławski was guided by a particular conception of sound even when making use, in later works, of his method of “limited aleatorism”, bringing the element of chance into certain passages in his orchestral scores by specifying pitch but leaving choices of duration to the players.

In Lutosławski’s Symphony No. 4, completed in 1992, conventional and aleatory passages alternate. After a sensuously lyrical beginning that recalls Mahler, a trumpet fanfare announces the first sonority employing chance techniques: harps and strings juggling prescribed pitches back and forth until the piano gives the beat and the whole orchestra falls in line. The remainder of the work continues this juxtaposition of free, modern “playing techniques” with clearly determined melodic lines of great beauty.

This use of an unordered sequence of pitches has only a negligible influence on the sonorities conceived by Lutosławski, as he himself has stated: “In my works, the original intention is always a particular concept of sound, one whose essential features remain intact – in spite of differences between individual performances arising from the introduction of chance elements.” The composer himself conducted the Los Angeles Philharmonic in the symphony’s premiere on 5 February 1993, resting his baton during the aleatory passages in order to relish the beauties of his use of musical chance along with the other listeners.

In several respects, the Piano Concerto No. 2 in B flat major by Johannes Brahms occupies a special position in the genre of Classical-Romantic solo concertos. In 1881, the year of its premiere, the critic Eduard Hanslick became the first to draw attention to the four-movement concerto’s decidedly symphonic qualities: “The B flat major Concerto is, in a stricter sense than other concertos, a grand symphony with piano obbligato. It merits this description, not only on account of the unusual number of movements (four instead of the normal three), but still more because of the complete penetration of the orchestra by the piano part, which dispenses with monologues and has only a few solo bars in each movement – a first among equals throughout.”

Brahms first conceived the B flat Concerto in spring 1878 but set it aside to write the Violin Concerto. He returned to it in 1881 during his summer holiday in Pressbaum, in the Vienna Woods, completing it in only seven weeks. The natural beauty of its place of composition may have influenced the work’s Romantic opening, but in the rest of the monumental first movement the untroubled atmosphere of nature painting is frequently disrupted: intimate and gruff musical themes alternate, producing the chiaroscuro effects typical of Brahms’s symphonic writing. In the double exposition of the principal themes, he makes use of a formal trick: the first time through is fragmentary, only a torso, and not until the second exposition does he give us the thematic material in full.

Compared to the massive orchestral sound of the two preceding movements, the scoring of the Andante is noticeably reduced. Over a carpet of strings Brahms spins out an intimate songlike theme on solo cello, its melody clearly anticipating his song “Immer leiser wird mein Schlummer” Op. 105 No. 2. Brahms did not set this poem by Hermann Lingg until 1886, five years later, but its soothing cradle-song character already permeates the piano concerto’s entire slow movement. In the middle section, there is an actual quote from one of Brahms’s songs, Todessehnen Op. 86 No. 6 (1878), a lullaby of a particular kind: yearning for the sleep of death is here sung in the entreating tones of the clarinets and piano.

After establishing such a quasi-religious mood, Brahms eschews a grandiose conclusion for the concerto and instead dispels preceding dark thoughts with a high-spirited final rondo. This buoyant Allegretto grazioso captivates listeners through the sheer pleasure of music-making that informs the piano part, a renewed delight in concertizing in the original sense of the word. Soloist and orchestra vie with one another over who can bring off the more beautiful rendition of the Hungarian-flavoured melody, with its dotted rhythms and vigorous syncopations. Ultimately for Brahms, a brilliant pianist who took the solo part in the B flat Concerto’s premiere, this joy in the act of playing became a refuge from writing the kind of music he would later call the “cradle-songs of my sorrows”.

Leif Ove Andsnes, who is the Berliner Philharmoniker’s Pianist in Residence this season, was born on the Norwegian island of Karmøy in 1970. A student at the Bergen Conservatory at the age of 16, he made his debut only three years later in New York and Washington, as well as afterwards at the Edinburgh Festival with the Oslo Philharmonic Orchestra under Mariss Jansons. The foundations of a successful career were laid, and as early as 1992, Leif Ove Andsnes performed in Berliner Philharmoniker concerts for the first time. Further debuts followed in Japan (1993), Paris (1996), London (1997) and Zurich (1998); since then, he has also given piano recitals in many famous concert halls, and has performed with leading orchestras and conductors all over the world. The Bergen Philharmonic Orchestra has appointed him Artist in Residence this season. Moreover, Leif Ove Andsnes is an enthusiastic chamber musician, a passion he also fosters as Co-Artistic Director of the Risør Festival of Chamber Music in Norway, where outstanding musicians come together for a week every year at midsummer. Among his prizes and awards are the Commander of the Royal Norwegian Order of St. Olav, the Peer Gynt Prize by the Norwegian govenment, the London Royal Philharmonic Society Award and – on more than one occasion – the German Record Critics’ Award. Leif Ove Andsnes is a professor at the Norwegian Academy of Music in Oslo, and an honorary professor at the Royal Danish Academy of Music in Copenhagen. He is also a member of the Royal Swedish Academy of Music.

Bernard Haitink, born in Amsterdam in 1929, is one of today’s most celebrated conductors with an international conducting career that has spanned more than five decades. He was at the helm of the Royal Concertgebouw for more than 25 years (1964 – 1988) and subsequently held posts as music director of the Royal Opera House Covent Garden (1987 – 2002), the Dresden Staatskapelle (2002 – 2004) and as principal conductor of the Chicago Symphony Orchestra (2006 – 2010). In addition, he was principal conductor of the London Philharmonic (1967 – 1979) and music director of the Glyndebourne Festival Opera (1977 – 1988) and the European Union Youth Orchestra (1994 – 1999). He is conductor laureate of the Royal Concertgebouw Orchestra and conductor emeritus of the Boston Symphony Orchestra. Bernard Haitink has received many international awards in recognition of his services to music, including both an honorary Knighthood and the Companion of Honour in the United Kingdom, and the House Order of Orange-Nassau in the Netherlands. He was awarded the Hans-von-Bülow-Medal by the Berliner Philharmoniker and named Musical America’s “Musician of the Year” for 2007. A regular guest with the Berliner Philharmoniker since his debut in 1964, he last appeared with the orchestra only a few days ago conducting Bruckner’s Fifth Symphony.

First concert in the Brahms/Schumann cycle with Simon Rattle