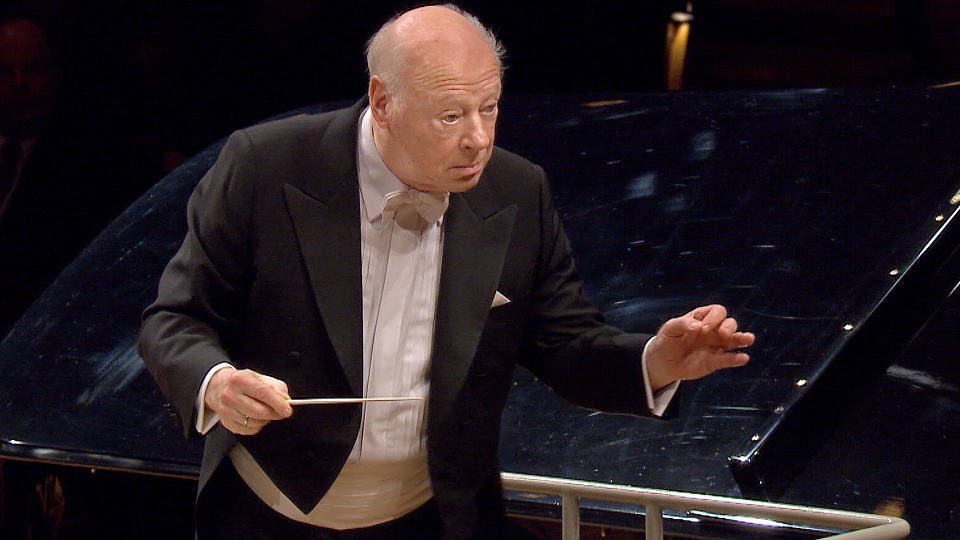 When Bernard Haitink and Emanuel Ax appear together in a concert, the composers on the programme are (almost) a given: Wolfgang Amadeus Mozart and Anton Bruckner. The American pianist has been playing with the Berliner Philharmoniker for over 25 years, and he has repeatedly proven himself a specialist in the piano concerti of the First Viennese School, particularly Mozart’s. The Dutchman Bernard Haitink, guest conductor with the Philharmoniker since 1964, on the other hand, is one of the outstanding Bruckner interpreters of our time.

The two artists gave a guest performance with the Berliner Philharmoniker once before in 2001 with just this line-up of composers. At the time the Berliner Morgenpost wrote about Emanuel Ax’s rendition of Mozart’s Piano Concerto in E flat major K. 449: “He considers it a privilege to serve Mozart. That pays off for both of them: the composer and his effortless interpreter.” This time Emanuel Ax plays another piano concerto in E-flat major, K. 271, which Mozart composed in 1777 for the pianist Louise Victoire Jenamy. With this virtuoso work, Jenamy, who was 21 at the time, proved herself a real master of the genre. Even the beginning in which the soloist and the orchestra immediately take up a lively dialogue is unusual and shows the composer’s individual creative drive.

The evening’s second work is also in the key of E flat major: Anton Bruckner’s Fourth Symphony, which carries the epithet “Romantic” and is among the Austrian composer’s most-performed works. Bernard Haitink last conducted this piece with the Berliner Philharmoniker in 1996. “We heard richly differentiated symphonic art,” the critic of the Berliner Zeitung wrote.

In an age of wide-ranging virtuosity and technical perfection in instrument making, the indication of a key has become mere supplementary information in addition to the title of the work – provided that the composition is even in a key. Gone are the days in which experts and amateurs knew why composers used particular keys for particular purposes and avoided others because they were not symbolically appropriate, were difficult to play or resulted in the use of strange notes like the B sharp in Sarastro’s E-major “hall aria” from Mozart’s Magic Flute, which ironically falls on the word “Mensch” man (from which Nikolaus Harnoncourt concluded that Sarastro’s humanitarianism left much to be desired). Incidentally, the Magic Flute begins in E flat major – a key that does not appear very often in Mozart but when it does, usually in a prominent place, as in the “Jenamy” Concerto.

E flat major was an even more unusual choice for Anton Bruckner’s “Romantic” Symphony, since this key does not occur in his great sacred works, in the five symphonies preceding his “official” Fourth (including the “Study” Symphony in F minor and Symphony No. 0, the “Nullte”, in D minor) or in the five symphonies which followed. It is also surprising that Bruckner avoids the key of E flat major even where it could be expected as the mediant, namely in the slow movements of his three symphonies in C minor. Bruckner reserved E flat major for this extraordinary composition at the centre of his oeuvre, which is his first large work in a major key. In his Ideen zu einer Ästhetik der Tonkunst Ideas on an Aesthetic of Music, which was written in the early 1780s and influenced the 19th century, Christian Friedrich Daniel Schubart wrote that E flat major is “the key of love, of devotion, of intimate conversation with God, with its three flats expressing the Holy Trinity”. The latter idea, in particular, may have been important for Bruckner, since esoteric formal principles and structural triads occur at every level in his symphonies.

Nicknames make work titles more memorable than keys, although it is not always clear why. Mozart dedicated his E flat major Piano Concerto, K. 271, to Louise Victoire Jenamy (1749–1812), whom he met several times as a young man and for whose father – a celebrated dancer and choreographer from Paris – he composed the ballet music Les petits riens. Whether Louise Jenamy gave the premiere of the work or even performed as a pianist at all remains a mystery. It has been established that Mozart played this E flat major concerto himself, however, and there are even indications that he presented it during his first appearance before the Vienna Composers’ Society in 1781 – thus leaving this Salzburg concerto as his visiting card.

There is great interest in these surrounding circumstances because the “Jenamy” Concerto is remarkable, even by Mozart’s standards. That applies to the virtuosic demands as well as the proportions and expansiveness of the three movements, each of which lasts a good ten minutes. It is particularly true of the musical structure, however, which is unique. First of all, the piano and orchestra are closely interconnected – probably because Mozart conducted from the piano and played along during the tutti passages. In some places the orchestral parts are notated for the piano, and in others a figured bass is intended for the soloist, as in Baroque music – an arrangement which is already upset in the second bar, when the piano suddenly barges in between two unison motifs in the orchestra.

The slow movement has always been a source of both admiration and bewilderment. The three-part Andantino with its dark C minor is unique among Mozart’s early concertos – the exuberant virtuosity in every bar of the outer movements here gives way to a plaintive discourse in which Mozart “is speaking to himself in his untranslatable language” (Wolfgang Hildesheimer). As unapproachable as this masterpiece may be, it has lost none of its fascination. Alfred Einstein regarded the “Jenamy” Concerto as one of the works of Mozart “in which he is entirely himself, seeking not to ingratiate himself with his public but rather to win them through originality and boldness. He never surpassed it”.

After completing his Third Symphony on 31 December 1873, Anton Bruckner already started composing the Fourth Symphony in E flat major on 2 January 1874, which he subtitled “Romantic” during the course of his work. The real history of this symphony did not begin, however, until after he finished the last bars on 22 November 1874, “at 8:30 in the evening”. Bruckner sent the score to the Berlin conductor Benjamin Bilse, whose brusqueness we have to thank not only for the fact that part of Bilse’s Kapelle split off and formed a new orchestra under the name “Berliner Philharmonisches Orchester” but also for the second version of Bruckner’s E flat major Symphony heard today. After Bilse’s rejection, Bruckner came to the conclusion, announced in a letter, “that my Fourth Romantic Symphony needs to be thoroughly revised”. In 1878 – long after Bruckner had completed his Fifth Symphony – he revised the Fourth, streamlined the part-writing, standardized the phrase construction, refined the dynamics and phrasing, replaced the Scherzo with an entirely new movement and wrote two new versions of the Finale. The work was revised again before the first edition was published. What we today know as Bruckner’s carefree masterpiece is actually the result of tenacious struggle.

Bruckner made no changes to the central ideas or the opening of his Fourth Symphony, however. The solitary horn fifths over the magical ppp tremolo are a stroke of genius; in a few bars they sum up what this symphony is about: Romanticism par excellence, horn calls in the forest (Bruckner himself spoke of daybreak in a medieval city), sound emerging out of nowhere with the development of expansive lines whose inner coherence is maintained until the Finale. The birdcall-like “zizibe” second theme allows nature to answer, its voices combining in a powerful unison torrent. Bruckner generally composed movements in sonata form with three themes rather than two; in this case the third theme is characterized by the “Bruckner rhythm”, in which a triplet follows a duplet. “Three is the dominant number in which Bruckner strives towards the whole” (Ernst Kurth), and “In it one could recognize the ancient philosophical triad of thinking, feeling and willing or the theological trinity of body, soul and spirit” (according to the composer and theologian Dieter Schnebel).

The slow second movement, like that of Mozart’s Piano Concerto K. 271, is in the relative key of C minor; Bruckner’s music is not tragic, however, but like a procession and litany. He referred to the new B flat major Scherzo as hunting music because of the blaring horns and described the warm-hearted ländler Trio as a dance tune “played for the hunters during their meal”.

There is none of that in the Finale. The dominant B flat ticks ominously in the low strings, snatches of themes from the previous movements pass by like visions in a dream and again lead into a powerful triplet theme, which is played by 19 voices in unison and gives no reason to expect a relaxed conclusion. But an almost superhuman final effort, a climactic tremolo lasting more than 60 bars, paves the way for the return of the horn fifth theme from the first movement – now in the full brass. The power of the world-creating E flat major triumphs over all obstacles.