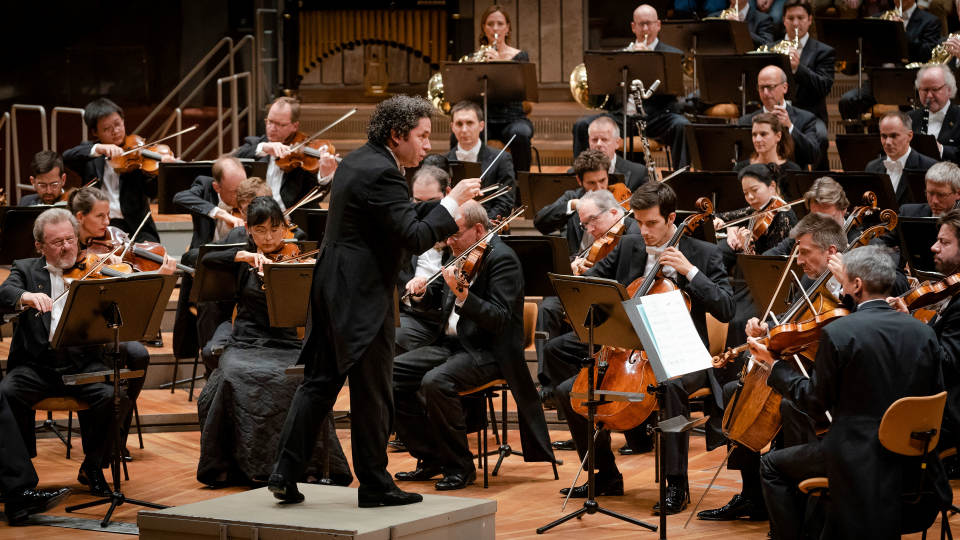 His life reads like a novel: born into a 50-square-metre household where seven people lived, Gustavo Dudamel joined the Venezuelan music project “El Sistema” when he was 4 years old. At the age of eleven, he received violin lessons, and one year later he tried out the conductor’s desk for the first time. In 1999, Dudamel finally took over the direction of the National Youth Symphony Orchestra “Simón Bolívar” under whose founder, José Antonio Abreu, he continued his conducting studies. Abreu provided his protégé with music and philosophy books and brought him ballet videos with Rudolf Nureyev – but also called at six in the morning to discuss Shostakovich with him. He once handed Dudamel a score of Mahlerʼs First Symphony: “A few hours later he said: sing the first movement!” In 2004, the charismatic Venezuelan, who is one of today’s foremost conductors, gained international attention following his success at the Gustav Mahler conducting competition in Bamberg. From 2007 to 2012 he was chief conductor of the Gothenburg Symphony Orchestra, and since the 2009/2010 season, he has been music director of the Los Angeles Philharmonic.

For this year’s guest appearance with the Berliner Philharmoniker, Gustavo Dudamel dedicates himself to Gustav Mahler, a transitional composer whose music absorbed both the last flourishings of the great Romantic tradition and the beginnings of a new epoch: probably no one else better formulated the brokenness of the end of the 19th and the beginning of the 20th century. In his symphonies, Mahler was able to capture the splendour of the past just as magnificently as the pain of its loss. On the programme is Mahlerʼs Fifth, whose fanfare opening already distinctively features those military idioms that were familiar to the composer from his early youth with their marches, signals and percussive, drumming salutes.

A very different tone is set by the first work of these evenings, written by Leonard Bernstein who, as a conductor, made a significant contribution to the Mahler renaissance which began in the 1960s. His Divertimento for Orchestra commemorates the 100th anniversary of the Boston Symphony Orchestra and is accordingly lively, sometimes contemplative but on the whole amusing and full of variety: music that starts with celebratory rather than military fanfares and presents dance types over its nine movements such as the samba, turkey trot and blues before culminating in a grand, final apotheosis: “The BSO Forever”.

In the Full Light of Day

100 years of solitude? Far from it. It was an illustrious celebration in the Massachusetts capital occasioned by the Boston Symphony Orchestra’s centenary in 1981. And one of the guests had a special reason to raise his glass: Leonard Bernstein, perhaps the most loyal friend to the symphony orchestra of the city where he grew up. When, logically enough, he was commissioned to write a piece for its anniversary, Bernstein didn’t hesitate for a moment. In a state of exhilaration, he composed the Divertimento for Orchestra.

The first movement, Sennets and Tuckets, begins with a flourish of brass, but only its title references fanfares from Shakespeare’s time. The music in this Allegro non troppo, ma con brio is typical Bernstein: wild, exuberant, rhythmically fragmented, fast, diverting and girded with syncopations. The pitches B-C function as the Divertimento’s motivic germ cell: initials standing for “Boston Centenary” used as a kind of inscription.

There are other allusions here and there. The next movement, a waltz (Allegretto, con grazia) for strings alone, clearly betrays its model. It is in 7/8 metre, consciously referring to the waltz in 5/4 time from Tchaikovsky’s Pathétique. We stay on the dance floor but change steps for the following Mazurka (Mesto, molto moderato). It is milder and more melancholy; towards the end of the movement, the oboe interjects a cadenza-like lament that directly quotes from Beethoven’s Fifth Symphony. Next comes a jolly, noisy Samba (Allegro giusto) with genuine fiery Latin American flair.

After the Dionysiacally charged storm, the music slips into a slightly inebriated (or hung-over) Turkey Trot, a forerunner of the Charleston. Next, in stark contrast, comes the shortest movement, the 45-second Sphinxes, which lives up to its name. We hear, first in the strings then in the wind, a mysterious melody based on a twelve-tone row, with philosophical mists wafting through it. They clear only slowly and not until we get to the Blues for brass and percussion which follows without a break.

The (crowning) conclusion of the suite is its eighth movement: In Memoriam; March: “The BSO Forever”. This finale, marked Andante, starts out as a solemn meditative canon for three flutes with flitting interjections of percussion, but then suddenly, when the march section begins, it flies off the handle. At the very end, the piccolo takes charge and, assisted by the brass, leads us with a descending melody line out the door of the Divertimento. But before we’re outside, we hear the trombones – as in Gustav Mahler’s Third Symphony, they sound like bells chiming in the air.

“Everything is said with music” – Gustav Mahler’s Fifth Symphony

Mahler’s symphonies were a focal point, if not the focal point, of Leonard Bernstein’s aspirations as an interpreter. He was early to recognize that Mahler’s music, for all its emotionality, was a manifestation that was historical and philosophical in nature. Mahler was a profound observer of time – his time. In his nine completed symphonies, one can discern a tripartite grouping. A frame is formed by Symphonies 1-4 (to the left, if you will) and Symphonies 6-9 (to the right). “Enthroned” in the middle is the Fifth: a musical rock massif that also marks the turning point in Mahler’s symphonic output. With it he takes leave of the Wunderhorn realm (and the domain of lyrical appropriation of its vocabulary) – although he risks a last fleeting glance at it in the Rondo-Finale – and formulates a new symphonic philosophy with nothing Romantic or mystical about it: “It contains only the expression of unprecedented force. It is a human being in the full light of day, at the peak of his existence.” This is how Mahler put his programmatic intentions for this unwieldy masterpiece into words, adding: “It is scored accordingly: no harp, no cor anglais (English horn). There is absolutely no place here for the human voice. There is no need for words; everything is said with music.”

The novelty of this work, whose five movements Mahler groups in three overarching divisions, can also be seen in its three-act structure – a cross, if you will, between Shakespeare and Chekhov. The first act of the drama is split into two movements (each about a quarter hour in length), of which the first (Trauermarsch. In gemessenem Schritt. Streng. Wie ein Kondukt/Funeral March: With measured step. Strict. Like a cortège) functions as a sort of exposition, and the second (Stürmisch bewegt, mit grösster Vehemenz/Stormily. With greatest vehemence) as its development. This unprecedented experiment is made even bolder by a seemingly almost complete abrogation of the usual thematic duality. The symphony is managed, not by blocks of themes, but by motifs; they dominate the activity, which has no further need for contrast because it is already contrast itself – though one without a defined goal. Theodor W. Adorno recognized that the second movement is shaped almost like a square: “For all its dynamism and vivid detail, the movement has no history, no direction, and really no emphatic dimension of time. Its lack of historical progress inclines it toward reminiscence; its energy, blocked in its forward rush, seems to flow backwards.” The turn taken by this movement without historical progress (but by no means without a sense of history) is especially interesting: it culminates in a visionary chorale, which already anticipates the key of the finale – D major.

Vision is one thing; the real world is another, and the way back to the former is quicker than one would perhaps wish. The Scherzo, a whirling waltz enlarged to symphonic dimensions, does not fall in with any form of traditionally smooth homophony but rather abides by a strict contrapuntal structure. Although the Scherzo and first Trio are firmly delineated, Mahler at the same time intermeshes the two sections, thereby veiling a clear separation. In other words: the various layers interpenetrate one another, and this device culminates in the coda where four themes in parallel strive at once to reach the ending.

Having arrived there, they are awaited by the F major Adagietto. Today it is probably the composer’s most popular piece, yet this magically melancholy song of farewell also ranks among the most profound to have issued from Mahler’s pen.

The tone of the D major Finale is one of jocularity at times boosted to titanic exuberance that, needless to add, never appears frivolous. Even – and especially – here, Mahler’s music is always wary, like the gaze of Rilke’s panther (can it be coincidental that the symphony and the poem were committed to paper at about the same time?). An introduction, seemingly aimless, seeks a rhythm of its own, a theme, a musical meaning, but at the same time, with its reference to the chorale from the second movement, it contains the entire material basis for nearly all the themes and motifs of this rondo. Even the triumphal theme that concludes the Finale in a stretto apotheosis already makes a masked appearance here. This is a highly sophisticated proposition that won’t immediately open the ears of every listener. That may be what Mahler was thinking when, after conducting a performance of the symphony in Hamburg in 1905, he remarked: “The Fifth is an accursed work. No-one understands it.”

Gustavo Dudamel was born in Barquisimeto in Venezuela in 1981 and trained as a conductor, violinist and composer: he studied the violin with José Francisco del Castillo at the Latin American Academy of Violin and took lessons in conducting with Rodolfo Saglimbeni. In 1999 he was appointed music director of the Simón Bolívar Youth Orchestra and began conducting studies with the orchestra’s founder José Antonio Abreu. He was only twenty-three when he won the Gustav Mahler Conducting Competition organized by the Bamberg Symphony Orchestra in 2004. He went on to become principal conductor of the Gothenburg Symphony Orchestra (2007 – 2012), where he currently holds the title of honorary conductor. Until today, he still serves as music director of the Simón Bolívar Symphony Orchestra of Venezuela. Since the 2009/10 season he has also been music director of the Los Angeles Philharmonic. At his initiative, the Los Angeles Philharmonic has dramatically expanded the scope of its community outreach programme, including most notably the creation of Youth Orchestra Los Angeles (YOLA), influenced by the philosophy of Venezuela’s admired El Sistema. In addition, Dudamel is a regular guest conductor with renowned orchestras such as the Vienna Philharmonic, the Berlin Staatskapelle and the Tonhalle Orchestra Zurich. His many distinctions include the Royal Philharmonic Society’s Music Award for Young Artists (2007). Dudamel was inducted into the “Ordre des Arts et des Lettres” as a Chevalier in Paris in 2009 and into the Royal Swedish Academy of Music in 2011. He has been named Musical America’s 2013 Musician of the Year; in 2014 he received the Leonard Bernstein Lifetime Achievement Award for the Elevation of Music in Society and in 2018 the Pablo Neruda Order of Artistic and Cultural Merit in Chile. Dudamel made his debut with the Berliner Philharmoniker at its annual Waldbühne Concert in June 2008; he last conducted the orchestra in July 2017 in works by Schumann and Wagner.