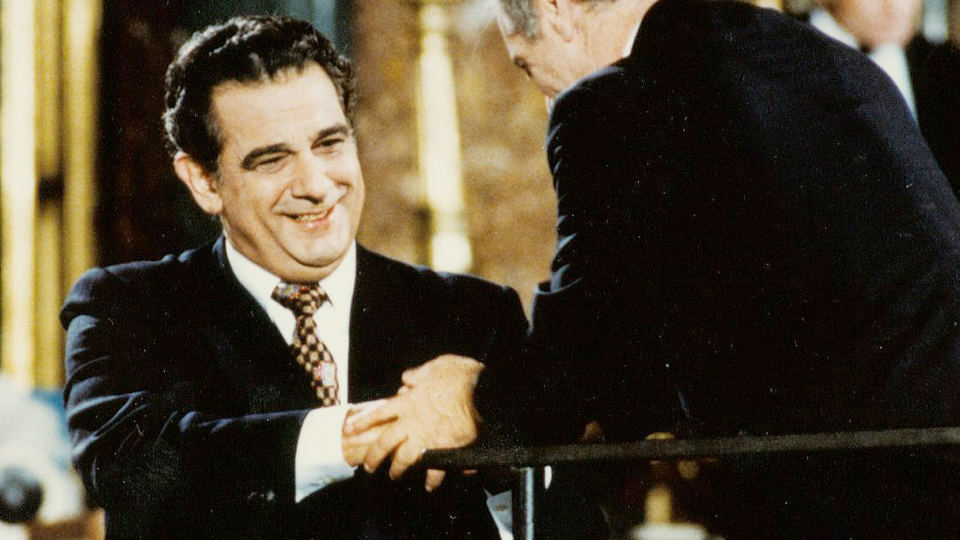 01 May 1992
Europakonzert from El Escorial

It was in 1991 that the Berliner Philharmoniker first marked the anniversary of their foundation on 1 May 1882 with a European Concert in Prague. The following year, the orchestra celebrated its 110th birthday by travelling to Spain and presenting a varied programme of Verdi, Wagner, Schubert and Berlioz in the magnificent Basilica of the Escorial near Madrid. On the podium was Daniel Barenboim, a regular guest of the orchestra who has conducted many of its European Concerts, while Madrid-born tenor Plácido Domingo brought vocal splendour to the proceedings.

With its combination of monastery and royal palace, the Real Monasterio de San Lorenzo de El Escorial is the largest Renaissance structure in the world and has been a UNESCO World Heritage Site since 1984. It was built at the bidding of Philip II, whose third wife was the French princess Élisabeth de Valois. She had previously been engaged to be married to Philip’s son, Don Carlos, a complicated relationship that inspired Friedrich Schiller to write his play Don Carlos and was later the inspiration behind Giuseppe Verdi’s opera of the same name. At the 1992 European Concert, Plácido Domingo sang “Io l’ho perduta” from Verdi’s opera, performing the role of the disillusioned heir to the Spanish throne in an almost authentic setting. Later in the concert the Spanish tenor shone in scenes from operas by Wagner and Berlioz, once again demonstrating his enormous stylistic breadth.

The orchestra came into its own in the darkly defiant overture to Verdi’s La forza del destino, in the spirited Rákóczi March from Berlioz’s La Damnation de Faust and in Schubert’s B minor Symphony, a work that continues to puzzle commentators to this day: is it really “unfinished” or did Schubert deliberately intend it to have only two movements? With his clear beat, Barenboim then conducted a series of powerful orchestral excerpts from Wagner’s music dramas, prompting Gramophone magazine to ask: “Has this place ever heard Wagner before? If so (and it seems unlikely), then surely not so magnificently played.”