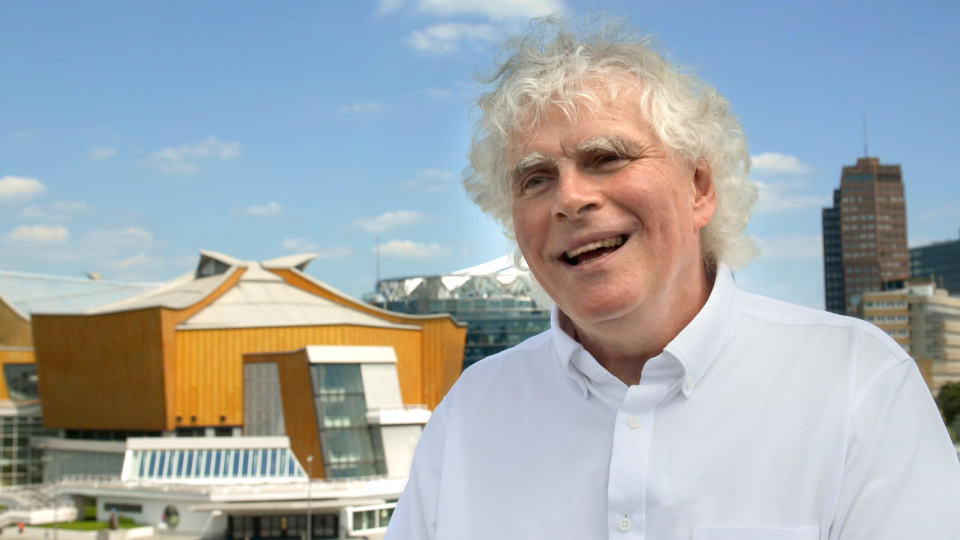 A film by Eric Schulz

Sir Simon Rattle was chief conductor of the Berliner Philharmoniker for 16 years, and the unusual length of this time alone gives his tenure the feeling of an “era”. But also in a qualitative sense, this was a special chapter in the history of the orchestra. This is shown in Eric Schulz’s documentary, which traces the many highlights and achievements of Sir Simon’s Berlin years in interviews, concert excerpts and archive material.

During his tenure, Sir Simon conducted not only a repertoire ranging from the Renaissance to contemporary compositions, but also developed a number of innovative projects with his musicians. These included the Late Night concerts, the internationally acclaimed Education Programme and the Tapas series of short works by major contemporary composers. In an unprecedented way, the Philharmonie has become a venue for musical theatre performances, often in productions by Peter Sellars, and the relocation of the Easter Festival from Salzburg to Baden Baden under Rattle has unleashed new creative energy. Last but not least, new media territory was entered with the launch of the Digital Concert Hall where almost all the Berlin concerts have been broadcast live on the Internet and made available for viewing shortly after as recordings.

Although the Philharmoniker’s profile was strengthened in the direction of an “orchestra of the 21st century”, there was always an unbroken commitment to tradition. Symphonies by Beethoven, Brahms, Bruckner and Mahler, operas by Mozart and Wagner, as well as the epoch-making works of classical Modernism, were also the focus of its artistic work under Sir Simon.

The relationship between upholding tradition and innovation is just as much a theme of this documentary as the collaboration between the conductor with his creative powers and his self-assured orchestra. In addition to Sir Simon himself, several orchestral members have their say, such as Jonathan Kelly, Matthew Hunter, Klaus Wallendorf, Rachel Helleur-Simcock and Rainer Seegers. And this much is certain: the fact that the British conductor quickly became one of the most recognisable faces of the Berliner Philharmoniker and the city of Berlin itself means that for them, the Rattle era will remain in the memory for many years to come.