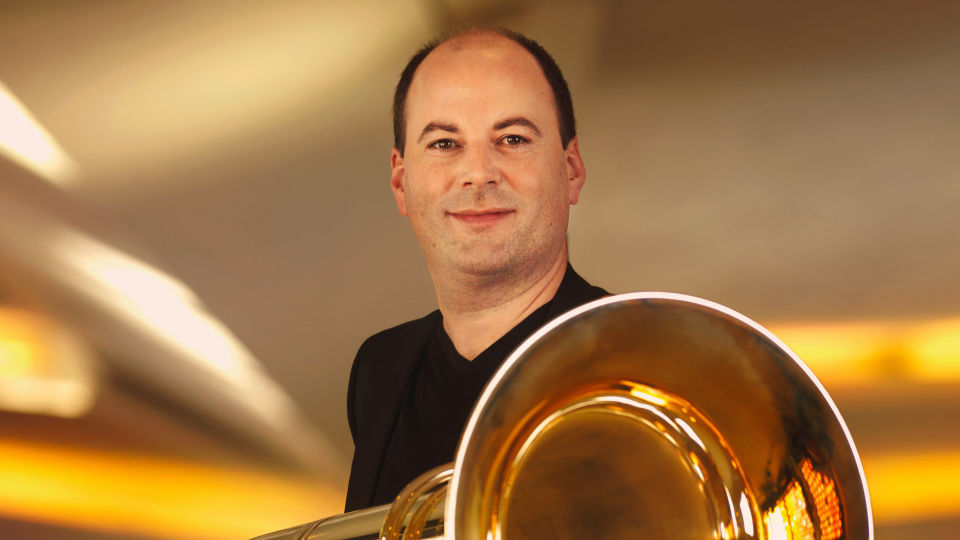 Even if there are currently no live concerts in the Philharmonie as a result of the corona pandemic, it is still possible to relive concerts from the Berliner Philharmoniker’s past with video recordings from the Digital Concert Hall's archives. With this in mind, Philharmoniker tuba player Alexander von Puttkamer has put together a playlist of ten works that are of particular significance to him.

Alexander von Puttkamer became a member of the Berliner Philharmoniker in 2008 after having worked at Bayerische Staatsoper and the Symphonieorchester des Bayerischen Rundfunks. Almost all of his work with the Philharmoniker is documented in the archives of the Digital Concert Hall. In his selection, he has included performances that are memorable to him either as a performer or as a spectator. In addition to famous symphonies and operas by Mozart, Bruckner, Verdi and Wagner, there are also rarely performed works, including Dmitri Shostakovich’s Twelfth Symphony and Benjamin Britten’s Violin Concerto which, despite the fact that the composers are well-known, are not part of the standard repertoire. In fact, the Berliner Philharmoniker had never played Shostakovich’s Twelfth Symphony in its long history until the young Gustavo Dudamel made a compelling case for the work in 2009 in a performance marked by its passion and precision. An equally committed advocate for a neglected composition can be found in the Dutch violinist Janine Jansen who, under the direction of Daniel Harding, is the soloist in Britten’s Violin Concerto, a piece characterised by dark glowing colours and existential despair.

A performance of Bruckner’s Seventh Symphony in May 2019 marked a farewell: conductor Bernard Haitink, who belongs to the small circle of honorary members of the Berliner Philharmoniker, announced his retirement from the concert stage shortly afterwards. In the poignant Adagio movement, Bruckner himself said his farewells to the revered Richard Wagner who had died shortly before. Alexander von Puttkamer is particularly familiar with Wagner’s music through his regular participation at the Bayreuth Festival. His playlist includes the first act from the Walküre, conducted by Sir Simon Rattle. Giuseppe Verdi, Wagner’s rival for supremacy in the world of 19th century opera, is represented by his penultimate opera, Otello. Zubin Mehta, with whom von Puttkamer often performed during his time at Bayerische Staatsoper, conducted this concert performance in the Philharmonie.

The tuba player only experienced Kirill Petrenko’s performance of Mozart’s Haffner Symphony as a spectator, since his instrument is not used in the music of the First Viennese School. Petrenko’s first appearance with the Philharmoniker following his election as chief conductor imbued the brass section with vitality and rhythmic drive. Contemporary works round off the selection: Jörg Widmann’s Flute Concerto with Emmanuel Pahud is a work by one of the most versatile musicians of our time. From the popular Late Night series comes a recording of Osvaldo Golijov’s Nazareno, in which the pianists Katia and Marielle Labèque appear as soloists. The piece by the Argentinean composer is a virtuosic combination of classical music, tango and jazz elements which together create a captivating musical language.