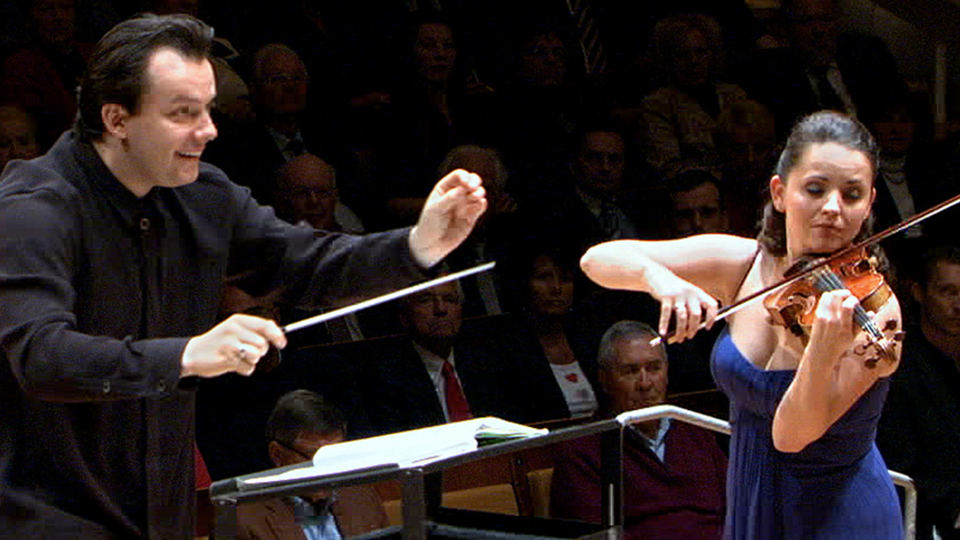 With two debuts in one evening, this concert from October 2010 has the up-and-coming generation of musicians at its heart. On her many CDs, the violinist Baiba Skride has shown herself to be both an impulsive and subtle artist. And Andris Nelsons had already been described by the Berlin Tagesspiegel as “the biggest and brightest hope in the conducting firmament” – an assessment that the then principal conductor of the City of Birmingham Symphony Orchestra confirmed with much admired debuts at the Wiener Staatsoper, the Met in New York and the Bayreuth Festival.

Grief and despair as expressed in the musical language of the 20th century – this is the central theme of both of this evening’s works. In the one case, a personal tragedy; in the case of the other, the global catastrophe that was the Second World War. The concert opens with Alban Berg’s Violin Concerto, with the inscription “To the Memory of an Angel”. This inscription refers to Alma Mahler’s daughter Manon Gropius, who died aged only 18 in the spring of 1935. “I do not attempt … to find the words where language fails by letter,” Berg wrote to Alma Mahler, “but yet: one day … may you hear in the Violin Concerto that which I feel today and cannot express”. This shock did not stop Berg from adhering to his own demands in terms of compositional technique, creating history’s first twelve-tone violin concerto.

Also in Shostakovich’s Eighth Symphony, which forms the second half of the concert, a delicately balanced texture is combined with overwhelming expressive power. This 1943 work reflects the brutality of war as well as the grief of the people. Even the vacuous pomp of military marches is taken up in this multi-form panorama and exposed through knife-sharp parody.

Experiences of subjective and collective suffering in the 20th century

All their dissimilarities notwithstanding, Alban Berg and Dmitri Shostakovich have some things in common. Berg, exponent of the “new music”, constantly drew on classical forms, while Shostakovich was one of the last 20th-century composers to write symphonies in the grand style. Both held up Gustav Mahler as one of their great models. Berg’s Wozzeck, his Lulu even more, and Shostakovich’s Lady Macbeth of Mtsensk are kindred spirits. In choosing two plays by Frank Wedekind as the basis of his Lulu libretto, Berg was exposing the dark underside of fin-de-siècle bourgeois society, while Shostakovich in his opera based on a short story by Nikolai Leskov makes an adulteress and husband-murderer his opera’s “heroine”. But Berg’s Violin Concerto and Shostakovich’s Eighth share something else. They were both created in response to a grim experience: one of individual suffering in the Austrian composer’s case (the death of a beloved person); one of collective suffering in the Russian’s (the miseries of a nation during World War II).

The Violin Concerto by Alban Berg presents a peculiar paradox. On the one hand, it is thought to be “easily understood” and directly accessible to listeners – hardly the norm for a work of the “Second Viennese School”. On the other, it is actually a highly complex work, methodically organised and not at all easy to perform. There is a further aspect to the ambivalence: this, the first strictly serially composed Violin Concerto, belongs indisputably to the classical tradition. Berg, unlike Schoenberg and Webern, has incorporated tonal reminiscences in a twelve-tone composition.

The work was commissioned from Berg in early 1935 by the Ukrainian-born American violinist Louis Krasner (1903 – 1995). Along with this “external” occasion for its composition, there was also an “internal” one: on 22 April 1935, Manon Gropius, Alma Mahler’s 19-year-old daughter from her brief marriage to the architect Walter Gropius, died after having contracted polio. As a close friend of Alma and her subsequent husband, the novelist Franz Werfel, Berg was devastated by the young woman’s death. He interrupted work on his opera Lulu and a few days later, at Lake Wörth in the Austrian province of Carinthia, and began composing the Violin Concerto, heading it “Characteristic traits of the young woman Manon to be translated into musical attributes” (communication to Anton Webern). The work was completed four months later, on 15 July 1935, with the fair copy of the score following in another four weeks.

The concerto is laid out in two movements, each further subdivided (Andante – Allegretto; Allegro – Adagio). The three-part Andante can be interpreted as a characterisation of the young Manon Gropius. Its opening is unusual, almost disconcerting: the soloist’s bow lightly and hesitantly brushes across the open strings as if intending to tune the instrument. A scherzo with two trios (Allegretto) follows without a break, its genial, light-hearted tone established by hints of waltzes and Ländler (reminiscences of Mahler) and the Carinthian folk tune “Ein Vogerl auf’m Zwetschgenbaum” (Little Bird on the Plum Tree). The second movement “describes” Manon’s illness and death, culminating in the Allegro, where the concerto reaches its dramatic climax in an almost brutal orchestral outburst, interrupted by the violin’s cadenza. The Adagio follows with woodwind intoning the chorale “Es ist genug” from J. S. Bach’s cantata “O Ewigkeit, du Donnerwort”, which is then treated to two variations. At the end, the violin soars up to transcendental heights and dematerialises, after which the concerto’s opening is heard once again. In the tone of painful mourning, one can also detect an “image of farewell” (Berg biographer Willi Reich), perhaps even of reconciliation.

Requiem for victims of the war

The Symphony No. 8 in C minor that Dmitri Shostakovich composed in just 40 days in the summer of 1943 can also be understood programmatically. It was written while he was staying at the composers’ rest home at Ivanovo during what proved to be the turning point in the war: Stalingrad had been liberated and the Red Army began a determined offensive against the German troops. If the “Leningrad” Symphony, his Seventh, largely composed in Leningrad under siege, is a work of protest against the German invaders that ends with an assurance of victory, the Eighth primarily “depicts” the terrible war’s effect, the great suffering that it inflicted on the Soviet population. And yet, along with all its unmistakable suggestions of wretchedness and resignation, the symphony also has its positive and visionary moments. In an interview, Shostakovich emphasised that the work reflected his thoughts, emotions and states of mind brought about by the good news of the Red Army’s first victories. At the same time, he was attempting to anticipate the postwar era and characterised the philosophical conception of his symphony with the phrase “all that is dark and evil will perish; all that is beautiful will triumph”.

The premiere of the Eighth Symphony in Moscow by the USSR State Symphony Orchestra under Evgeny Mravinsky on 3 November 1943, part of an anniversary celebration of the October Revolution, was a great success. Nevertheless, critical opinion was divided. Some reproached the composer for the work’s perceived structural deficiencies – for its “expressionistic eccentricity”, “preponderance of gloomy colours” and the depiction of “a weary people, broken by war”. Others emphasised the scale of the work. It is “a great document that tells of our complex and difficult times” (Shostakovich biographer Ivan Martïnov), and an “epic song, tragic in content, about the limitless capacity of the human soul to endure suffering” (composer Boris Asafyev).

Formally Shostakovich’s Eighth, comprising three symmetrically laid-out “divisions”, recalls the symphonies of Mahler. Movement 1 corresponds in length to movements 3 – 5, which play without a break. Between them is a brief (roughly seven-minute-long) Allegretto. The symphony begins with an extended Adagio in which a motto on strings suggesting a bugle call is answered by a dark-hued violin theme. The exposition is largely given over to the strings and woodwind, symbolising the tone of suffering, while the highly dramatic development section is polyphonic, and towards the end of the movement the music becomes highly dissonant. The ensuing Allegretto is a marchlike scherzo in rondo form, aggressive and with grotesque features. “The demonstrative eccentricity conceals a deeper meaning: images of evil are projected on a grotesque, satirical background” (musicologist Lev Danilevich). It is above all the central Allegro non troppo with its marcatissimo figure that represents the unspeakable inhumanity of the war. Rhythmically suggesting a toccata, its principal melody is deliberately simple and banal – and not only because of the popular tune played on the trumpet. A mighty climax leads to the peaceful, meditative Largo, which Shostakovich casts in the form of a passacaglia. The final Allegretto is in the radiant key of C major, but the mood is anything but affirmative. Militating against that are, among other features, the chamber-musical passages, the outbreak of the “warlike” theme from the first movement and the ending – thinly scored and pianissimo.

Andris Nelsons was born to a family of musicians in Riga. His career began as a trumpeter in the orchestra of the Latvian National Opera as well as the winner of many competitions for his singing (including the Latvian Grand Music Award for outstanding achievement in music). After completing his studies in Riga, he became a student of Alexander Titov in St. Petersburg; since 2002 he has been a student of Mariss Jansons. From 2003 to 2007 Andris Nelsons was music director of the Latvian National Opera, taking on the same role the year after with the City of Birmingham Symphony Orchestra, with whom he appeared as part of the musikfest berlin 09 in the Philharmonie in September 2009. Also in 2009, he completed his tenure as principal conductor with the Nordwestdeutsche Philharmonie in Herford. Last season, Andris Nelsons conducted performances at the Royal Opera House Covent Garden, the Metropolitan Opera New York, the Wiener Staatsoper, and has been invited to return by all three. This summer, he made his conducting debut at the Bayreuth Festival in a new production of Lohengrin, directed by Hans Neuenfels. Andis Nelsons has already made appearances with such internationally renowned orchestras as the Royal Concertgebouw Orchestra in Amsterdam, the Symphonieorchester des Bayerischen Rundfunks, the Staatskapelle Berlin, the Philharmonia Orchestra in London and the Tonhalle Orchestra Zurich. This will be his first appearance with the Berliner Philharmoniker.

Baiba Skride, originally from Latvia, grew up in a musical family and began studying the violin in her hometown of Riga. From 1995 she was taught by Petru Munteanu at the Rostock University of Music and Drama, and in 2001 she won first prize at the Concours Reine Elisabeth in Brussels. Since then, she has made guest appearances with the world’s greatest orchestras including the Symphonieorchester des Bayerischen Rundfunks, the Gewandhaus Orchestra in Leipzig, the London Philharmonic Orchestra and the Tonhalle Orchestra Zurich; in these concerts, she will be making her debut with the Berliner Philharmoniker. Baiba Skride has worked with conductors such as Paavo und Neeme Järvi, Kirill Petrenko, Simone Young, Donald Runnicles, Mario Venzago, Thierry Fischer, as well as Andris Nelsons and Mikko Franck. Her most important chamber music partner is her sister, the pianist Lauma Skride, with whom, as a duo, she has celebrated successes worldwide for many years. She is “Artist in Residence” at the Usedom Music Festival, which this year is dedicated to Baiba Skrides’ homeland of Latvia. The artist plays the “Wilhelmj” violin by Antonio Stradivari from 1725, generously on loan to her by the Nippon Music Foundation.

The Berliner Philharmoniker, Simon Rattle and Karita Mattila at the “Proms”