Yannick Nézet-Séguin makes his debut with Berlioz and Prokofiev 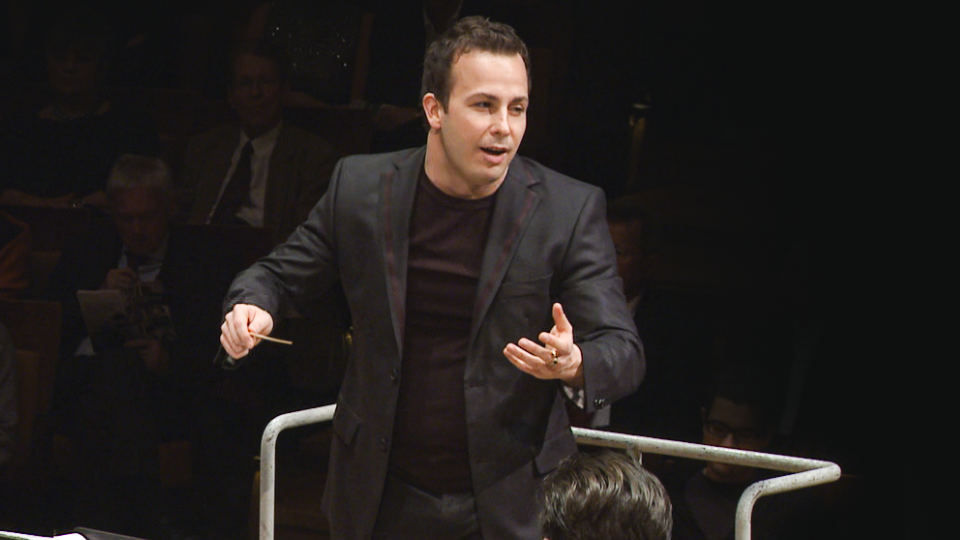 It was somewhat of a sensation when in October 2010 it was announced that the then just 35-year-old Yannick Nézet-Séguin was soon to be the next music director of the Philadelphia Orchestra – the successor to Leopold Stokowski, Eugene Ormandy, Riccardo Muti, Wolfgang Sawallisch and Christoph Eschenbach. For his debut with the Philharmoniker in Berlin just a few weeks later, he conducted Sergei Prokofiev’s Piano Concerto No. 2 and Berlioz’s Symphonie fantastique. At his side was Yefim Bronfman, an artist who is committed to the piano works of Prokofiev more than almost anyone else.

As the New York Times once wrote: “What makes Mr. Bronfman so successful in music of this sort is that he is the same kind of pianist as Prokofiev was a composer. In other words, he is a virtuoso, with chops that need fear no comparisons, yet his musicality purges that virtuosity of mere brilliance.” In this recording, Bronfman takes the same approach with the Second Piano Concerto: a work which Prokofiev started when he was still a student, but which already contains the full expressive scope of the composer.

Hector Berlioz is also – along with Prokofiev – proof positive that composers can be virtuosos too, not only performing artists. Using vast orchestral forces, he develops a wide range of scenarios in his Symphonie fantastique – from airy waltzes to garish grotesquerie. Just how right Yannick Nézet-Séguin is for this demanding score could be read in the review of the Frankfurter Allgemeine Zeitung: “Yannick Nézet-Séguin is blessed with … a compelling physical intelligence. Beneath the theatrical hysteria of this piece with its abrupt changes of character and gesture, the conductor produces a large-scale unity of movement, with a dramatic pulse and an emotional prevailing mood.”

Compositions by Berlioz, Prokofiev and Messiaen

Muses are fond of kissing, but this English one withheld her kisses and was more of a facilitator than a loving partner. She was a celebrated actress for whose attention Hector Berlioz was vying when he organised a concert of his own compositions at the Paris Conservatoire. Harriet Smithson was the name of the 27-year-old composer’s inspiration: “When I’ve written the instrumental composition that I’m now planning, I’ll go to London to perform it in order to achieve a brilliant success in her presence.” With this thought in his head, Berlioz created his Symphonie fantastique (1830). If ever a work deserved the label “symphonic poem”, it is surely this one: five “episodes in the life of an artist” are depicted in musically emotional form. The piece’s most salient features are the indeterminate nature of the passions to which it gives musical expression, the establishment of a musical idée fixe that runs through all the movements, and the autobiographical literary programme on which the symphony is based.

In the first movement (Rêveries – Passions) a young musician falls in love. The music is laid out as a sonata form in which the idée fixe emerges at crucial points like a principal theme. But in the course of further development, where these points are connected, the theme is not involved: it remains untouched and unaltered, a kind of obsession that pursues the imaginary hero through the entire work. In the second movement (Un bal), the idée fixe adapts itself to the circumstances and appears in the guise of a graceful waltz. But this mood does not last long: the artist is too vexed by the “beloved image”.

A peculiar “mixture of hope and fear” pervades the Scène aux champs. The feigned peacefulness of the scene conceals a conflict that becomes evident when the idée fixe is heard: this foreign theme is not readily integrated into the pattern of flowing 6/8 time. By the time we hear rumbling thunder from the timpani, conjuring up an image of “dark premonitions”, the affair has clearly taken a sinister turn, which is confirmed in the following Marche au supplice: the idée fixe’s melodic force is largely suppressed and broken by the march’s powerful rhythmic structure.

Berlioz now explores the repercussions of this situation. In the finale (Songe d’une nuit du sabbat), he sets sonority against rhythm and makes three attempts to develop the music out of a thematic exposition. The idée fixe appears in grotesquely distorted form; it then gives way to a wild witches’ dance; this is followed in turn by the Dies irae chant from the Requiem Mass, which is finally combined with the dance. A hellish spectacle escalates towards a state of ecstasy before reaching a bizarre, fantastic, almost parodist end.

Serge Prokofiev was a musical cosmopolitan, and his works pull together various styles and influences. In the five piano concertos there is an additional element deriving from his exceptional gifts as a pianist: a note of anarchy and an incredible virtuosity are combined with a mastery of classical form. That description especially fits the Piano Concerto No. 2 in G minor op. 16 (1912/13), which Prokofiev wrote while still a student at the St. Petersburg Conservatory. The first thing one notices in a comparison with his First Concerto is the change in emphasis: in the earlier work the orchestra and soloist are still equal partners, but here the piano is unchallenged in its command of the work’s structure. Meanwhile – especially in the third and fourth movements – Prokofiev has pushed the dissonance level almost to the brink of atonality. Yet along with this bold harmonic language are such thoroughly “classical” elements as the work’s strict thematic underpinning and a four-movement layout that harks back to that of Brahms’s Second Piano Concerto.

Within this formal articulation the composer allows himself astonishing liberties. The opening movement’s development section, for example, is given over entirely to the piano and brings back the languid idea that opens the work. Propelled by sharp accents on the solo instrument, the theme takes on rhapsodic arabesques. Melodic formulas lead to a gruffly classicistic second theme, but then, for the remainder of the movement, the first idea holds the upper hand: this sighing melody is heard again and again and assumes a powerful, at times menacing character.

The Scherzo introduces an entirely different sound-world. This Vivace with its surprisingly witty turns of phrase and unbridled driving rhythm lasts only about two and a half minutes. If a hint of conventional prettiness is still to be found in it, that quality is almost completely absent from the following Intermezzo, which is shot through with an almost barbaric colouring, even though a milder, lyrical idea surfaces in the middle section.

The rhapsodically shaped Finale is a unique creation, bursting into its bizarre main theme like a thunderbolt. In this Allegro tempestoso, the powers are now fully unleashed. Once they are spent, at least momentarily, a simple Russian folk melody is heard, quickly enriched with dissonances. This theme is developed and concentrated in a dialogue between pianist and woodwind until it takes on a heroic quality, only to be abruptly pushed aside by the first theme, now varied. A solo cadenza brings repose and relaxation, but the storm soon breaks out again, this time even more violently, more orgiastically. With no sign of hope left in sight, the concerto ends with a last great orchestral whack.

The titles that Olivier Messiaen gave his compositions are almost all related to extra-musical topics. This was already true with Les Offrandes oubliées (1930), a “méditation symphonique” lasting less than a quarter of an hour, the first of his orchestral works to receive a public performance in a symphonic concert. The influences of Arthur Honegger, Claude Debussy and Albert Roussel can still be detected here and there, yet, at the same time, Messiaen has already found the individual musical idiom that an observer of the premiere characterised as “mystical through and through”. There is a poetic-religious programme, a poem by Messiaen whose three stanzas serve as the basis of the work’s three musical sections.

The first section’s theme is the forgetting of Christ’s love and his sacrifice. Messiaen described it as a “lamentation in groups of uneven duration” and its basis is a motif that undergoes various transformations. This lamentation is brought to an abrupt end by the wildly racing music of the second section, whose theme is human sin – most obviously heard in the strong accents, harshly dissonant harmonies and incisive trumpet calls. The third and final section suggests an internalised, almost spiritual recollection of the work’s opening. A long slow violin phrase rises over pianissimo chords – the sins are forgiven and Les Offrandes oubliées ends with a confession of faith: “You love us, sweet Jesus: that we had forgotten.”

Yefim Bronfman, born in Tashkent, Uzbekistan, in 1958, emigrated to Israel with his family at the age of 15 and became an American citizen in 1989. His teachers included Arie Vardi in Israel and Rudolf Firkušný, Leon Fleisher and Rudolf Serkin in the USA. Yefim Bronfman launched his international career in Montreal under Zubin Mehta in 1975; his first concerts with the New York Philharmonic followed three years later. Since then Yefim Bronfman has appeared with the leading international orchestras, collaborating with many distinguished conductors. Recipient of the prestigious Avery Fisher Prize in 1991, he performs with such chamber music partners as Shlomo Mintz, Lynn Harrell, Joshua Bell, Pinchas Zukerman and the Emerson, Cleveland, Guarneri and Juilliard Quartets. During the 2007/2008 season the pianist was Perspectives artist at New York’s Carnegie Hall and Artiste étoile at the Lucerne Festival in summer 2009. Since his debut with the Berliner Philharmoniker in 1983 Yefim Bronfman has appeared frequently at the Philharmonie as a concert soloist, chamber musician and in solo programmes, serving as the orchestra’s Pianist in Residence during the 2004/2005 season. His most recent appearance with the Philharmoniker was on 21 June 2009, when he performed Sergei Rachmaninov’s Third Piano Concerto under Sir Simon Rattle at the Waldbühne.

Yannick Nézet-Séguin studied piano, conducting, composition and chamber music in his native city of Montreal and continued his training with Carlo Maria Giulini. The young conductor has received numerous awards, among them the Royal Philharmonic Society Award and the Virginia Parker Award from the Canadian government in 2000. After serving as principal guest conductor of the Victoria Symphony Orchestra from 2003 – 2006, Yannick Nézet-Séguin assumed the post of artistic director of the Orchestre Métropolitain in Montreal. He is also music director of the Rotterdam Philharmonic Orchestra, principal guest conductor of the London Philharmonic Orchestra and music director designate of the Philadelphia Orchestra, where he will take up his position as music director in the 2012/2013 season. His European debut in 2004 was followed by numerous appearances with leading orchestras throughout the world, including the Staatskapelle Dresden, the Orchestre National de France, the Cleveland Orchestra and the Chamber Orchestra of Europe. He conducted the Scottish Chamber Orchestra at the London Proms in 2009 and made his debut at the Salzburg Mozart Week in 2010. Yannick Nézet-Séguin has also achieved great success as an opera conductor, with Bizet’s Carmen at New York’s Metropolitan Opera and Janáček’s The Makropulos Case at the Netherlands Opera in Amsterdam in 2009. He led performances of Poulenc’s La Voix humaine and Debussy’s L’Enfant prodigue during the Rotterdam Opera Days in 2010 and conducted the Vienna Philharmonic in Mozart’s Don Giovanni at the Salzburg Festival. These concerts mark his debut with the Berliner Philharmoniker.

Murray Perahia with works by Mozart and Schubert

A Beethoven evening with Nikolaus Harnoncourt