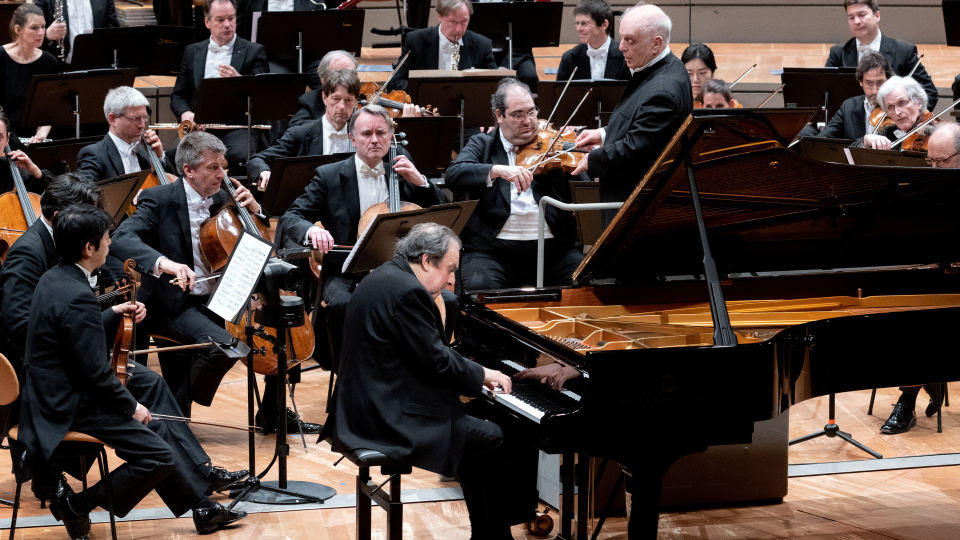 In this concert, the Berliner Philharmoniker, conductor Daniel Barenboim and pianist Yefim Bronfman present an all-Brahms programme. In addition to the First Symphony, they also perform the Piano Concerto in D minor, the first orchestral work that the composer presented to the public.

The genesis of both pieces shows how arduous and circuitous the process was in which Johannes Brahms conquered the great musical forms. It was not only what Brahms perceived as the incomparability of his role model Beethoven that proved to be a burden for the young composer, but also an article from 1853 in which Robert Schumann had predicted a great future for the 20-year-old Brahms as a creator of large-scale orchestral and choral works. While Brahms worked on his First Symphony for 14 years, the Piano Concerto, planned first as a sonata for two pianos, then as a symphony, changed genres several times. In the concerto, a passionately agitated first movement is followed by an Adagio of hymn-like grace, which Brahms himself described as a “gentle portrait” of his friend Clara Schumann, and a captivating final rondo. With the Berliner Philharmoniker, Yefim Bronfman follows in the footsteps of the composer who himself was the soloist in the D minor Concerto with the orchestra in January 1884.

The failure of the work’s second performance in Leipzig in 1859 was to remain the last setback Brahms experienced on his way to becoming one of the most acclaimed composers of his time. Like Beethoven’s Fifth Symphony in C minor, the First Symphony “recommends itself” in Brahms’s own words “not through amiability”. It is underpinned by a rather tragic mood that only clears with the famous horn solo of the finale. The successful premiere in Karlsruhe nevertheless proved that Brahms had also developed into a worthy heir to Beethoven in the ultimate instrumental genre of the symphony.