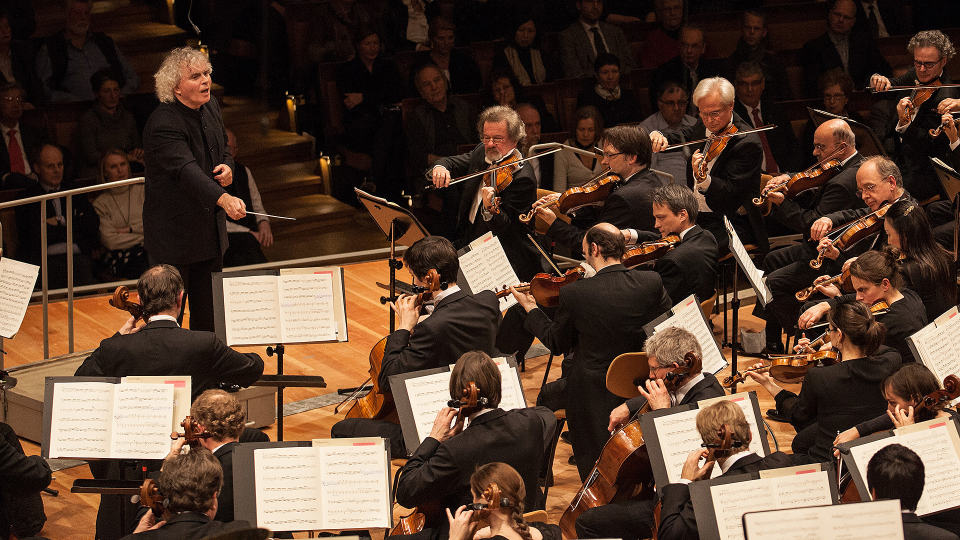 In his Fifth Symphony, which ends with a grandiose song of nature, Sibelius again applied himself to the “big tone” in the traditional heroic key: E flat major. The work ends with a highly effective finale, in essence based on a figure in the winds that the composer himself designated a “swan hymn”: “Today at ten to eleven I saw 16 swans. One of my greatest experiences! … The Fifth Symphony’s Finale-theme: Legato in the trumpets!!”

Sibelius’s Sixth, in contrast, which largely dispenses with the otherwise typical rhapsodic discontinuities and contradictions and also has markedly concertante characteristics, lives from a never-ending flow of the melodic figures, set out in front of listeners in filigree, polyphonic curved lines. The music of a romantic impetus is enhanced in the Finale “in a dark orchestral roar in which the main theme drowns” (Sibelius), before a melancholy string movement leads to the conclusion.

How much Sibelius had departed in his symphonic works from the traditional canon of forms can last be heard in his one-movement Seventh Symphony, premiered as Fantasia sinfonica, which Simon Rattle performs directly following the Sixth: starting from an adagio tone in the strings reminiscent of Mahler, the music progresses through many stages to a fateful climax, before a Largamente conclusion again takes up the plaintive character of the beginning. This performance of Symphomies Nos. 5, 6 and 7 concluded Sir Simon Rattle’s Sibelius cycle with the Philharmoniker from 2015.

Notes on the last three symphonies of Jean Sibelius

It was a long and, particularly towards the end, difficult road the symphony had to take from the middle of the 18th to the beginning of the 20th century. After the promising beginnings of Giovanni Battista Sammartini, Luigi Boccherini and François-Joseph Gossec and the heyday of the First Viennese School, the genre reached a point of no return with Ludwig van Beethoven’s Ninth Symphony which made the composing of symphonies seem obsolete, if not impossible. Those who nonetheless made the attempt – Robert Schumann, Johannes Brahms or Anton Bruckner – found it difficult. Others sought their salvation in freer, often programmatic forms, which were given an initial impetus by Hector Berlioz’ Symphonie fantastique. At best, the symphony enjoyed a certain standing in the context of some national schools of the 19th century, such as can be seen in the works of Niels Wilhelm Gade, Antonín Dvořák, Alexander Borodin, Nikolai Rimsky-Korsakov or Peter Tchaikovsky. In the end, it is only in the symphonic cosmos of Gustav Mahler that the classical-romantic model ultimately appears to have survived. Anyone who subsequently held on to the four movement order of sonata form, trio, scherzo and finale, revealed himself to be either an eclecticist or Neo-classicist.

This is at least the image of the genre from a Central European point of view. From a broader perspective however, one can see that particularly in the years just before and after the First World War, the symphony had not at all gone out of fashion. Even if one limits onesself to composers whose names still have a certain ring on the concert stage, the list of symphonists is surprisingly long: in France there were Vincent d’Indy, Albéric Magnard, Joseph Guy Ropartz, Albert Roussel and Charles Tournemire; in Russia Reinhold Glière, Vasily Kalinnikov, Nikolai Myaskovsky, Sergei Prokofiev, Sergei Rachmaninoff, Alexander Scriabin and Maximilian Steinberg; in England Edward Elgar and Ralph Vaughan-Williams; in the Czech Republic Josef Bohuslav Foerster and Josef Suk; in Poland Karol Szymanowski; in Denmark Carl Nielsen – and in Finland Jean Sibelius: the most significant symphonist of the early 20th century along with Mahler – even if this may initially sound like an exaggeration.

In order to understand Sibelius’ significance as a symphonist, one should in the first instance beware two (pre-)judgemental opinions: one should not view him merely as a Finnish national composer, and forget René Leibowitz’ defamatory description of Sibelius as “the worst composer in the world”. Sibelius’ music followed different rules and different routes to, say, Arnold Schoenberg’s serialist compositions, evolving from the classical-romantic models of melody and form. Anyone who only accepts this view would probably judge no differently to Theodor W. Adorno in his infamous Glosse über Sibelius in 1937: “As themes, some completely prosaic and trivial sequences of notes are presented, these sequences of notes are met with an early accident, like an infant that falls off a table and injures its spine. They cannot walk properly.” The idea that Sibelius’ symphonic concept should deliberately reflect the gradual process of learning to walk – a kind of “musical production while composing” or as Wolfgang Rihm expressed it, “music as a rambling form” – was alien to Adorno.

The genesis of his Symphony No.5 in E flat major op. 82 shows how difficult it was for Sibelius to realise this concept: Started in late summer in 1914, by 1919 it had been revised twice following its premiere on the 8 December in 1915 – Sibelius’ 50th birthday. The symphony originally had four movements, the first in sonata form and – after a general pause – a scherzo as the second movement. In the first revision, Sibelius replaced this general pause with a bridge section, and in the third and final version, the symphony attained its current form with the Scherzo integrated in the first movement. The motivic material from which the whole work develops seems initially to be in fact ‘prosaic’ and amorphous. Only in the Allegro-molto finale can the two main lines be heard in their pure form: the forward-moving horn theme with its large intervallic leaps, and the circling quaver figure in the woodwinds. In contrast to the Fourth Symphony, the Fifth seems at first glance to be less experimental. “Yet behind the classical facade of this symphony hide the very elements that made the Fourth seem so ‘progressive’: bold harmonies, occasional bitonality, the free interplay of musical lines and innovative structural solutions.” (Erik Tawaststjerna)

While working on his Fifth, Sibelius had already started making sketches for another symphony in 1914: theme-tables, motivic cells, harmonic progression diagrams. “As always, I am a slave to my themes and have submitted myself to their needs,” he wrote in 1918 when he had seriously started to work on the new piece. It was however to take several years before the composer finally conducted the first performance of his Symphony No. 6 in D minor op. 104 in Helsinki on the 19 February 1923. In general the work was felt to be a logical continuation of the previous symphonies: “The same simplicity of expressive means, translucency of sound, the same pull towards transcendental intangibility.” (Heikki Klemetti) In fact all four movements of the Sixth also develop from an extremely reduced concentration of motivic elements which only reveal themselves to be a consistent theme in the finale. What does on the other hand turn out to be new, is the modally influenced harmony, which can be traced back to Sibelius’ study of the works of Palestrina and Orlando di Lasso. “And yet, despite signs of modality in the transparent nature of this composition, Sibelius is not a polyphonic composer.” (Wilfrid Mellers). This compositional procedure for the Sixth corresponds perfectly to the “Typus der Expansionsform” (expansionist form type) as Hans Mersmann described one of the basic principles of Modernism in 1924: “It is rooted in the rules of the older forms whose contours it stretches (often beyond recognition) and hides strong and constructional values within. It is a driving force, development, not dying away but growing.”

The development from the Sixth to the one-movement Symphony No. 7 op. 105 was perfectly consistent. At the first performance, which the composer conducted in Stockholm on the 24 March 1924, the piece was presented with the title Fantasia sinfonica – a clear indication of how aware Sibelius was of having reached beyond the norms of the genre. What Robert Layton calls the “motif metamorphosis” principle, which is the basis of all his symphonies, seems in the Seventh to actually disrupt if not destroy all formal relationships, in that the diminution of the material irritated even well-meaning critics: Ralph W. Wood, the English musicologist for example, stated that Sibelius had “failed heroically”. Yet one must ask exactly how he failed: by not continuing and reviving the symphony according to Beethoven, an intention Sibelius himself never expressed? In 1932, Ernest Newman had already warned that in the Seventh, one should not “search for a form, but simply for form” – for a self-contained order: “There is no first then second, no chicken or egg, that causes a particular idea to express itself in a particular form: They are one and the same.”