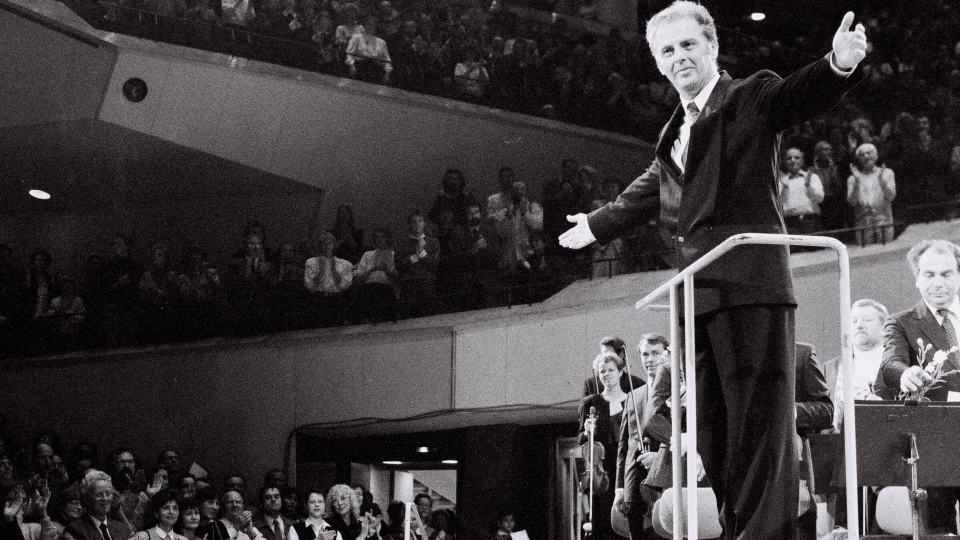 The Berlin Wall fell on 9 November 1989, thus ending the decades-long division of Europe and the world. It was an event of both political and emotional significance which the Berliner Philharmoniker celebrated three days later with a concert which itself is now considered a historic event. Especially for citizens of the GDR, Daniel Barenboim conducted the First Piano Concerto (with himself as soloist), and the Seventh Symphony by Ludwig van Beethoven. As an encore, the overture to Mozart’s Così fan tutte followed – the opera which the orchestra and conductor had just recorded together at that time.

You can clearly see how deeply moved everyone present was – although the musicians did their utmost to concentrate and give a musically pleasing concert. Even more than others, the Berliner Philharmoniker was constantly aware of the division of its city. When the Berlin Wall was erected in 1961, the Berlin Philharmonie was under construction only a few hundred metres away – and suddenly found itself right on the border between East and West. The present recording is not only one of the most wonderful documents from the time of German reunification, but also marks the moment in which the Philharmoniker again became the orchestra for the whole of Berlin.

Seiji Ozawa conducts a Gershwin Night at the Waldbühne

Christian Thielemann and Albrecht Mayer with works by Strauss and Bruckner

“Welcome among us”: Concert for refugees and helpers