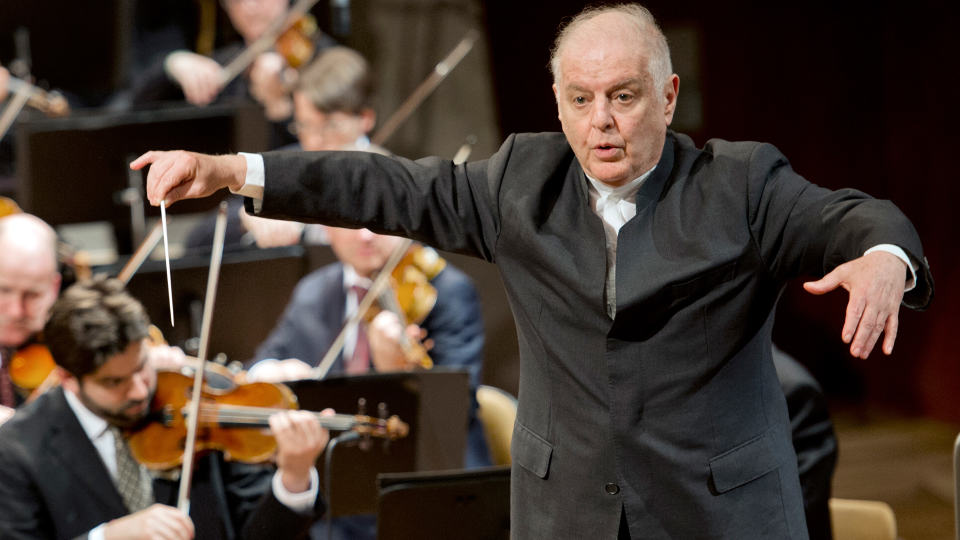 A local visitor: Daniel Barenboim, general music director of the Staatsoper Unter den Linden in Berlin is the guest conductor of the Philharmoniker for this concert. The first piece of the programme is a discovery: Jörg Widmann’s symphonic hymnos Teufel Amor – a work that owes its title to a fragmentary surviving poem by Friedrich Schiller from 1782. In the line “Sweet Amor, / remain in melodic flight”, the text provides a musical reference which gave Widmann the inspiration for his half-hour-long orchestral work. The imagination of the composer was also fired by the contradiction in the title Teufel Amor, which led musically to a linking of strongly contrasting elements. And perhaps it is only the experience of the darkly timbred and “almost unbearably long introduction, in which the assembled violins of the orchestra are silent” (Widmann) that gives the later “beautiful places” of the unabatedly tonally composed music its beguiling effect.

After the interval, Daniel Barenboim turns to Piotr Tchaikovsky’s dramatic Sixth Symphony, the Pathétique, which also begins with an extremely sombre introduction. Tchaikovsky himself declared the symphony to be the “keystone of his whole creative works”; while composing it, he was repeatedly reduced to tears. The idea of the Pathétique as Tchaikovsky’s highly emotional legacy is still given credence by the fact that he died nine days after the premiere. Contemporaries report, however, that the composer worked on the piece no differently than on any other, and turned immediately after its completion to other projects. And in fact, it probably needs a minimum of serenity in order to create such a soulful, but also ingeniously constructed work in which there is, for example, a waltz in the complicated 5/4 time.

Death and the Devil

On 13 January 1782, Friedrich Schiller’s first play Die Räuber (The Robbers) had its premiere at Mannheim’s National Theatre and unleashed a veritable scandal, making its author an overnight sensation in Germany. Having left his post as regimental doctor to the Württemberg ducal army in Stuttgart in order to attend the performance, Schiller was promptly placed under arrest for two weeks and prohibited by Duke Carl Eugen from having contact with anyone from outside the duchy or from writing anything further. He decided to flee Stuttgart, a risky undertaking in which he was joined by his friend Andreas Streicher, a pianist, composer and, later, confidant of Beethoven. In Mannheim, where the two deserters initially went into hiding, Schiller wrote the drama Fiesco, but it was not accepted for performance by the local theatre. While staying in Frankfurt in October 1782, his state of impoverishment compelled him to seek a publisher for his extended poem Teufel Amor (Devil Cupid). According to Streicher’s recollections it was one of Schiller’s most perfect lyric creations. Today we can only speculate about its content, however, as the poem survives only in a two-line fragment: “Süsser Amor, verweile / Im melodischen Flug” – “Linger, sweet Amor / in melodic flight”.

Those two lines of Schiller’s poetry inspired Jörg Widmann’s orchestral work by the same name, taking as its subject the “Janus-faced character of love as paradise and snake pit”. The composer has written: “My imagination was fired by Schiller’s fragment. His conception of the flight of Amor as the heights and depths of a melodic progression inspired me to compose a symphonic hymn that praises the marvels of love – even in its devilish incarnation.” This single-movement work’s basic scoring corresponds to that of a Beethoven symphony (though with the addition of a celesta and two extensive percussion sets) and is laid out in four parts, the first of which opens with the most lugubrious imaginable sounds: the winds only slowly ascend from the low register, which inevitably suggests the infernal abyss. This “almost unbearably long introduction” (Widmann) dispenses entirely with the sound of violins: “Nothing happens. There are only masses of rubble – whole registers are missing. This introduction has the character of an announcement; one knows that the violins will play sooner or later.” A sequence of notes circling round B flat and first heard on low wind forms the musical foundation. In the third phase of the introduction, following an eruptive double-bass outbreak, the music is interrupted at irregular intervals by the interjection of short, dynamically exposed chords – “Cupid’s arrows”, according to Widmann, which indent the linear musical gestures.

The second part begins ecstatically, “like a hymn”. The tempo is first doubled, then – with the accompaniment of timpani, drums and tom-toms – trebled. After an unexpected breaking off, the “nearly inaudible shadowy sound” of two muted trumpets is joined by an ostinato consisting of a tom-tom beat, wind or string chords of undefined pitch and a loud blast of air across the flute’s mouth-hole. With a renewed increase in tempo, the “Devil’s dance” finally intensifies into an infernal ride, culminating in a wild feroce. In the third part, the creepy sounds of a plectrum martellato on the harps, elbow clusters on the celesta, fffff tremolos on the violins in their highest register and screeching double basses in theirs yield to a return of the opening with low winds “droning heavily” in the depths.

The fourth and last part is dedicated to Amor – love – but its dancelike euphony is short-lived. The dreamy, romance-like melodic content is taken almost unaltered from Widmann’s own Schubertian Lied for orchestra. This is a song in praise of love, but the idyll soon peters out into a “distant reprise, which has lost all its heroism and hope”. The sinister ending is reserved for the Devil, snorting with rage, who in the face of “true love” has reached the limits of his power. “It leads”, says Widmann, “to the Devil’s stomping – and vanishing. Perhaps he’s now on the lookout for a new victim, leaving behind only the smell of sulphur.

Pyotr Ilyich Tchaikovsky: Symphony No. 6 in B minor “Pathétique”

Like Widmann’s Teufel Amor, Tchaikovsky’s Sixth Symphony begins in the dark, profound depths of the wind instruments – with an 18-bar bassoon-dominated introduction that contains the quintessence of the entire movement though it was composed after the following sonata section was already completed. The Adagio’s central building blocks are the germinal motif of a falling (sighing) 2nd preceded by an upbeat of two quavers (eighth notes) and the chromatic descending line in the double basses. These two traditional lamentation figures, fixtures of the musical vocabulary since the 17th century, provide the entire work with its emotional content. The second of these motifs, the so-called passus duriusculus, is best known from Bach’s vocal works such as the first chorus of his cantata “Weinen, Klagen, Sorgen, Zagen”, BWV 12 and the lamenting music derived from it in the Crucifixus of the B minor Mass. Similar in effect is the four-bar chorale-like musical quotation of a liturgical melody from the Russian Orthodox Requiem – “With thy saints, O Christ, grant peace to the soul of thy servant” – heard in the third part of the development section on trombones and trumpets.

The formal layout and unusual character of the movements further reinforce the requiem-like nature. The Allegro opening movement ends with an emphatically resigned coda suggesting a funeral march, while the second movement, a typically Russian waltz but in 5/4 time, displays an uncommonly buoyant melancholy, described by the conductor Arthur Nikisch as akin to “smiling through tears”. Just as this waltz doesn’t correspond to a typical slow movement, the third movement doesn’t exhibit the disposition of a conventional scherzo, although there are certainly scherzo-like features in its sometimes grotesque and ghostly march, which has the character of a frantic tarantella or breathless danse macabre.

The finale is anything but the normal triumphant Allegro in rondo or sonata form, instead a three-part Adagio lamentoso – a lament whose melodic impetus gradually stalls. At the end of the coda, in which the sighing motif and lamenting bass of the opening are taken up once again, the music disintegrates into its individual elements. Only the rhythmic momentum remains. It dies away – like a slowly expiring pulse beat – soon fading “into the blackness of non-being, as though bleeding to death” (Hans Mayer).

The Viennese critic Eduard Hanslick was among the first to surmise that the Pathétique’s unfamiliar formal design “probably concealed a poetic programme”. This supposition was repeatedly confirmed but never made concrete by Tchaikovsky. And yet there can hardly be any doubt that the Sixth Symphony is a piece of large-scale mourning music – a work inspired by the eternal themes of art and what it means to be human: life and death, love and abandonment, as well as protest, struggle, resignation and despair.

Daniel Barenboim was born in Buenos Aires in 1942 but moved to Israel with his parents ten years later. His first piano teacher was his mother, followed by his father. He was ten when he made his professional debut in Vienna and Rome, and it was not long before he was undertaking international tours. He made his conducting debut in London in 1967 and since then has appeared with leading orchestras throughout Europe and the United States. The most important stages in his career to date have been as principal conductor of the Orchestre de Paris from 1975 to 1989, as music director of the Chicago Symphony Orchestra from 1991 to 2006 and as general music director of Berlin’s Staatsoper Unter den Linden since 1992. In the autumn of 2002 the Berlin Staatskapelle appointed him principal conductor for life. Since the autumn of 2011 he also holds the post of Music Director at the Teatro alla Scala, Milan. Barenboim additionally appears as guest conductor at international opera houses and renowned festivals.

Daniel Barenboim and the Berliner Philharmoniker can look back on an artistic partnership lasting more than fifty years. It was in June 1964 that Barenboim made his debut as pianist with the orchestra in Béla Bartók’s First Piano Concerto under the direction of Pierre Boulez. He first conducted the orchestra five years later with works by Haydn, Beethoven and Schumann. His most recent appearance on the podium was at the Europakonzert on 1 May 2014 in Berlin, where he conducted works by Nicolai, Elgar and Tchaikovsky. Celebrating his 50 years of artistic collaboration with the orchestra he was the pianist in Johannes Brahms’s First Piano Concerto in a concert conducted by Sir Simon Rattle in June 2014.

In 1999 Barenboim and the Palestinian writer Edward Said set up the West-Eastern Divan Workshop, which every summer brings together young musicians from Israel and the Arab countries in order that the shared experience of communal music-making may encourage dialogue between the different cultures of the Middle East. In 2002 Barenboim and Said received the Príncipe de Asturias Prize for their peace efforts in fostering international understanding. Among the many awards that Daniel Barenboim has received are the Grand Cross of the Order of Merit of the Federal Republic of Germany and the Ernst von Siemens Music Prize; he was named »Grand officier dans l’ordre national de la Légion d’honneur« in France and »Knight Commander of the Most Excellent Order of the British Empire«.

Manfred Honeck and Yo-Yo Ma at the Easter Festival