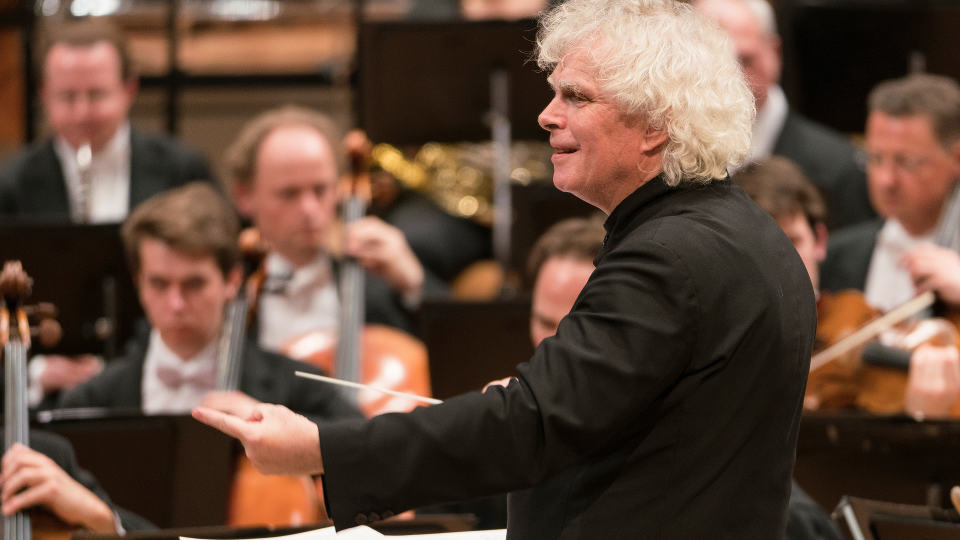 Simon Holt’s music is full of iridescent timbres and is created with great attention to detail. He has been the Composer in Association of the BBC National Orchestra of Wales for many years. At the beginning of this concert, Sir Simon Rattle premieres a new symphonic “canapé” by the British composer, written in the scope of the Philharmonic “Tapas” series, which consists of commissioned works lasting a maximum of six minutes in performance.

The programme continues with a musical heavyweight, Bruckner’s Eighth Symphony: a truly monumental work that acquires its energy from the interplay of wave-like escalations, the piling up of clearly contoured blocks of sound and a dynamic falling back of the music. It’s not for nothing that Ernst Kurth used the image of the “symphonic wave” to describe Bruckner’s symphonies in his book Music Psychology, which was first published in 1931– a term that aims at the feeling of fluctuating, culminating and relaxing, and at the always new climaxes and ebbs in his music. Furthermore, one can read in Kurth about light and dark shadings, echo sounds and “thinner to fuller layers of sound” – concepts appropriate to describe Bruckner’s Eighth Symphony, whereby in this work, which tends to extremes, a balance is ultimately maintained between static and dramatic gestures despite all the music’s falling into abysses and being restored again: the first theme of the massive first movement (which is followed by two more) evolves from the mysterious sound of “cloudy” horn calls and string tremoli, before in the development the musical forces collide with each other unchecked. At the end there is a resigned coda that gradually dies down in pianissimo.

Bruckner himself wrote in a letter to the conductor Felix Weingartner, referring to the first movement, of a “death announcement which from time to time appears, louder each time, and at the end is very loud: the surrender”. After the Scherzo and its idyllic trio, a conclusion is drawn on the basis of the previous symphonic development: in the sombre Adagio, defined by the dark sound of the Wagner tubas, and in the “solemn” Finale, in which brass cascades pile up over string sounds, before in the development the motivic elements are artfully combined. The thematic shapes from the previous movements are first touched on in the coda, until finally the four contrasting themes are layered to create a huge final apotheosis, entirely in the spirit of Kurth’s “symphonic wave”.

At the beginning of this century the average attention span of a human being was twelve seconds. Thirteen years later it was only eight seconds. At least that is what a study by the software company Microsoft established in 2015. Even goldfish can concentrate one second longer than we rational beings, according to the study, which analyzed data from more than 2,000 participants. The cause of this disturbing trend was quickly identified: our digitalized lifestyle bombards us with so many stimuli that split-second decisions on the attractiveness and relevance of what is offered become a matter of survival. The result is impatience, distraction and a feeling of being constantly overwhelmed.

It may be that the brain becomes faster at deciphering symbolic codes. It is also quite possible that the ability to process information which arrives simultaneously improves through the constant use of electronic gadgets – multitasking, for example. But what is the situation when evaluating complex relationships? What about understanding classical music? A concert programme which juxtaposes a short piece and an exceptionally long orchestral work promises quite unscientific answers to such questions.

With a duration of approximately 80 minutes, Anton Bruckner’s Eighth Symphony even exceeds Beethoven’s Ninth in length. The monumental work has been referred to as the “epitome of the Romantic symphony” and the “culmination of Bruckner’s work”. Anyone who hears it, who wants to decipher it, needs perseverance. Its scale is as immense as the wealth of forms and emotions. Bruckner’s harmony is enormously complex and variable. That hardly matters when listening to it, however, since all developments take place in virtually timeless tranquillity, although regular metric periods, clear proportions and a good deal of redundancy facilitate understanding. Not until the very end of the Finale, when the main themes of all the movements are combined in a contrapuntal tour de force, does the hidden harmony of the ideas reveal itself – and with it, the secret of the Creation as such, which was of crucial importance to the devout Catholic.

Surcos begins with much more modest aspirations. It is an appetizer lasting approximately six minutes, which the British composer Simon Holt wrote for Sir Simon Rattle’s “Tapas” series of orchestral miniatures and can be savoured for the first time at these concerts. The work for small orchestra lasts no longer than the exposition of Bruckner’s first movement. Instead of Bruckner’s “big picture”, this work is about fragile growth from small seeds. “Surcos” is the Spanish word for “furrows”. Holt, who has lived mainly in a village near Granada for several years, took his inspiration from the poem “November 1913” by the Spanish poet Antonio Machado (1875–1939). Machado’s simple but evocative lines describe how the sower casts his seeds into the furrows of the ploughed earth while winter gradually arrives at the foot of the Sierra Nevada mountains in Andalusia.

“It’s more difficult to write a short piece than a long one, because the ideas convey their expressive content in a special way and have to ‘bite’ immediately – otherwise they can seem very superficial,” says Holt, who was born near Manchester in 1958. “It’s very tricky to find the right tempo; that’s true for every shorter work. At the same time, however, it should come across as quite spontaneous.” Holt maintains a three-four metre with an even, brisk pulse over the entire stretch of 210 bars, although the tempo indication is “Largo: quasi Sarabande”. And the music actually seems to begin relatively slowly. Sustained notes and light textures predominate; only sporadically are they interrupted by brusque sforzatos. It takes a while before the fluttering staccato figure of the piccolo from the very first bar is also taken up by other instruments. Melody, tempo and dynamics gradually become more animated, while the rhythmic energy intensifies to a dancelike maelstrom.

The genesis of the Eighth Symphony was complicated, even by Bruckner’s standards. It began in summer 1884, during a phase of optimism. The Te Deum and the Seventh Symphony had just been completed and were also performed several times abroad. Although Bruckner’s teaching commitments strictly limited his time for composition, sketches for the symphony were completed by August 1885. Work on the first draft of the score followed immediately, progressing from the Trio and Scherzo to the first movement and Adagio to the Finale. At the beginning of September 1887 Bruckner wrote to Hermann Levi, the acclaimed conductor of the premiere of Wagner’s Parsifal: “Hallelujah, the Eighth is finally finished, and my artistic father must be the first to know.” A short time later, the composer sent Levi the score with the words “May it find favour!”

When Levi rejected the work on the grounds that he did not understand it, Bruckner fell into a depression but quickly pulled himself together again. He soon decided to completely revise the symphony but in the process also became unsure of earlier works. He had just begun work on the Ninth but interrupted it for several years in order to revise not only the latest symphony but also the Third, First and Second. The second version of the Eighth Symphony was finally completed in March 1890.

The formal revisions are more significant than many of the changes in the orchestration. Most obvious are the alterations to the coda of the first movement. In place of the emphatic restatement of the opening theme with which the first version of the Allegro moderato ended, Bruckner now composed a full-scale collapse. Just before reaching the harmonic goal, the triple fortissimo abruptly breaks off. The horns and trumpets chant the rhythm of the first theme in unison over a timpani roll. This begins three more times in the strings, as though exhausted, but then disintegrates into a faint pianissimo, circling repetitively. “That is the death watch,” Bruckner reportedly said about this passage. In the context of the sombre first movement, which rarely achieves harmonic stability, this pessimistic coda seems only logical, however.

Bruckner shifted the position of the Scherzo from the third to the second movement. This is also dramaturgically convincing: the contrast to the mood of the previous movement, which recalls Wagner’s despairing Dutchman, could scarcely be greater. The combination of the strikingly simple bass figure in the first theme and the shimmering of the strings provides a unique mixture of juvenile light-heartedness and impressionistic magic. In this Scherzo Bruckner had in mind the figure of the “deutscher Michel” (German Michael) with his pointed cap. The first theme of the Trio was completely rewritten for the second version.

The changes to the Adagio involve brief omissions and several enhancements to the orchestral texture. In addition, the climax of the movement is raised from C major to E flat major. Only a few changes were made to the Finale, to which Levi had objected most strongly. They were mainly cuts which shortened the movement by 62 bars. Like the critical edition published by Leopold Nowak in 1955, Robert Haas’s edition from 1939, which is heard in these concerts, is also based on the second version of the symphony. Haas inserted ten bars from the first version into the Adagio which Bruckner had crossed out, however, and also restored the cuts in the Finale, adding eight bars from Bruckner’s sketches.