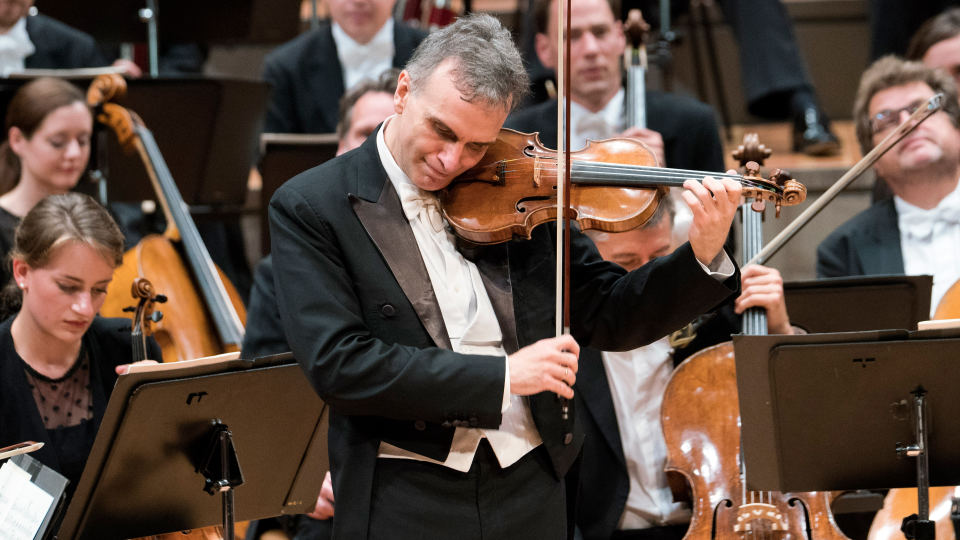 Ever since the passionate interpretation by Jacqueline du Prè, Edward Elgar’s Cello Concerto has been an indispensable part of the classical repertoire. Elgar’s only violin concerto, on the other hand, has been performed much less frequently until today, although it found an equally passionate champion in Yehudi Menuhin (his recording from the 1930s, conducted by the composer, is unforgettable). The three-movement composition, with its original formal structure, calls for a soloist who can bring its tenderly autumnal, lyrical tone to life without sentimentality. Gil Shaham, who made his debut with the Berliner Philharmoniker in 1988 at the age of 17 and has returned to the orchestra several times since then, is such a soloist. Shaham performed Elgar’s Violin Concerto in October 2008, conducted by David Zinman.

In the second part of the programme, the American conductor presented a work composed in his own country. Béla Bartók, an uncompromising opponent of National Socialism and Fascism, left Europe in 1940 and went into exile in America. During the last years of his life, which were overshadowed by financial worries and a serious illness, he wrote only a few compositions, all of which were inspired, however. A melancholy elegy is the centrepiece of his Concerto for Orchestra, in which not a guest virtuoso but the members of the orchestra are allowed to shine in brilliant solo passages. The second and fourth movements as well as the Finale are characterized by a defiant will to live, elemental rhythmic power and masterful structure; the influence of American jazz is also apparent.

20th-Century Classics by Elgar and Bartók

On a visit to England in 1905, Fritz Kreisler told the press: “If you want to know whom I consider to be the greatest living composer, I say without hesitation, Elgar … I place him on equal footing with my idols, Beethoven and Brahms... I wish Elgar would write something for the violin.” What composer could resist such flattering words from one of the world’s best-loved virtuosos? Elgar promptly jotted down two melodies that would become principal themes of his Violin Concerto’s first movement, but serious work on the new composition had to wait until 1909.

By August 1910 it was finished, and on 10 November Kreisler gave the first performance in London’s Queen’s Hall with the composer conducting. It was an immediate success with audiences and critics, and the passing decades have confirmed that here is indeed a concerto to take its place alongside Beethoven’s and Brahms’s as one of the finest in the violin’s repertoire. Classical in its three-movement structure, deeply Romantic in the substance that fills those forms, extraordinarily taxing in its demands on the soloist, it is also an unusually personal work, often overtly emotional in its expression and daringly intimate in its musical ideas and allusions.

In the score Elgar dedicates the Violin Concerto “to Fritz Kreisler”. But there is also a rather mysterious epigraph in Spanish: “Aquí está encerrada el alma de .….” (“Here is enshrined the soul of …..”) When Elgar mentioned this to a friend, he added provocatively: “Now guess.” We can now do more than guess: from the composer’s touching correspondence with her, we know with virtual certainty that the enshrined soul was that of Alice Stuart-Wortley, a close friend of Edward and Alice Elgar and daughter of the famous Pre-Raphaelite painter Sir John Millais. Addressing her as “Windflower” – thereby resolving the awkwardness of her sharing a name with his wife – Elgar wrote of “our concerto” and “your concerto,” and of certain key phrases as “Windflower” themes.

In one of his letters to “Windflower”, Elgar confessed: “I have written out my soul in the concerto.” Since Kreisler introduced it nearly a century ago, it has been impossible for violinists not to play out their souls when performing this musically rich, moving and revealing work. As one of Elgar’s biographers, Michael Kennedy put it: “No matter whose soul the concerto enshrines, it enshrines the soul of the violin.”

In 1940 Bartók emigrated from Fascist Hungary and settled in the USA. He spent the few years remaining to him in New York, far from his beloved homeland and the recognition and success he had enjoyed in Europe. Although he taught a few piano and composition students, briefly held a research appointment at Columbia University and made two tours as a pianist in 1941, Bartók did not compose again until the spring of 1942, when he noted down some musical ideas suggesting a concerto for “combinations of solo instruments and string orchestra”. Soon chronic illness – eventually diagnosed as leukaemia – forced him to put the work aside.

In May of 1943, two fellow Hungarian émigrés, the violinist Joseph Szigeti and the conductor Fritz Reiner, persuaded Serge Koussevitzky to commission from Bartók a large orchestral work for the Russian conductor’s Boston Symphony Orchestra. In August, probably drawing on his material from the previous year, Bartók began drafting a five-movement work. By October, the score was completed, and in December 1944, the Concerto for Orchestrahad its triumphant first performance in Boston. Koussevitzky called it “the best orchestral piece of the last 25 years”.

In his programme note, Bartók revealed that “the title of this symphony-like orchestral work is explained by its tendency to treat the single orchestral instruments in a concertant or soloistic manner ... for instance, in the fugato sections of the development of the first movement (brass instruments) or the perpetuum mobile-like passage of the principal theme in the last movement (strings), and especially in the second movement, in which pairs of instruments consecutively appear with brilliant passages.” And the work’s mood he described as gradually progressing from the “sternness of the first movement and the lugubrious death-song of the third, to the life-assertion of the last one”.

An exception to this progression is the jesting second movement; and the “interrupted” Intermezzo fourth movement features a mocking quote from Shostakovich’s “Leningrad” Symphony, which Bartók heard broadcast while composing the Concerto (his son Péter has also claimed that the reference is to a Viennese cabaret tune, while other commentators have cited a popular Hungarian song and even the “Maxim” motif from Lehár’s Merry Widow).

The Concerto for Orchestra’s immediate success heralded Bartók’s popular breakthrough, though its relative accessibility by comparison with his works of the 1920s and 30s prompted some grumbling over a perceived betrayal of his creative integrity. Most critics have agreed, however, that the Concerto represents a masterly summing-up of his achievement and yet another confirmation of Bartók’s status as one of the 20th century’s supreme masters.

Gil Shaham was born in Illinois in 1971, but grew up in Israel. He was seven when he started to play the violin. His exceptional talent soon attracted attention, his early mentors including Haim Taub, who became the boy’s teacher in 1980 and who introduced him to Isaac Stern, Nathan Milstein, Henryk Szeryng and Jaime Laredo. He completed his studies with the famous violin teacher Dorothy DeLay at the Juilliard School of Music in New York. Still only ten when he gave his first public concert in Jerusalem, he performed for the first time with the Israel Philharmonic in 1982 and four years later made his European debut at the Schleswig-Holstein Music Festival. Within a year he was appearing in Milan and with the London Symphony and Bavarian Radio Symphony Orchestras. In 1990 he was awarded the Avery Fisher Career Grant and two years later received the Premio Internazionale of the Accademia Chigiana in Siena. He now works with the most prestigious orchestras and conductors and is a regular visitor to the concert platforms of all the world’s leading centres of music. Gil Shaham first appeared with the Berliner Philharmoniker in 1988, performing Sibelius’s Violin Concerto under the direction of Sir Colin Davis. His most recent appearance was in early June 2005, when he was one of the two soloists in Hindemith’s Chamber Concerto for piano, violin and thirteen wind instruments under the direction of Sir Simon Rattle.

David Zinman has been Chief Conductor of the Tonhalle Orchester Zürich since 1995 and Music Director of the Aspen Music Festival since 1998. Born in New York in 1936, Zinman first studied composition at the University of Minnesota. His conducting studies at Tanglewood Music Center brought him to the attention of Pierre Monteux who introduced him to his first prominent conducting opportunities. Since then has conducted many of the world's leading orchestras in Europe, North America, Israel and Japan. After positions as chief conductor in den Netherlands and the USA, David Zinman in 1985 took leadership of the Baltimore Symphony Orchestra. His tenure (until 1998) was marked by a commitment to the performance of contemporary music and his introduction of historically informed performance practice. In 2000 the French Ministry of Culture awarded David Zinman the title of “Chevalier de l'Ordre des Arts et des Lettres”; in 2002 he won the City of Zurich Art Prize for his outstanding artistic efforts, making him the first conductor and also the first recipient of this award not originally from Switzerland. In 2008 he also received the Midem Classical Award “Artist of the Year” for his work with the Tonhalle Orchester Zürich. David Zinman gave his debut with the Berliner Philharmoniker in 1985; he last appeared on the rostrum of the orchestra in October 2005 with works by Webern, Beethoven and Schumann.

A Beethoven evening with Bernard Haitink and Isabelle Faust