Britten’s “War Requiem” with the National Youth Orchestra of Germany 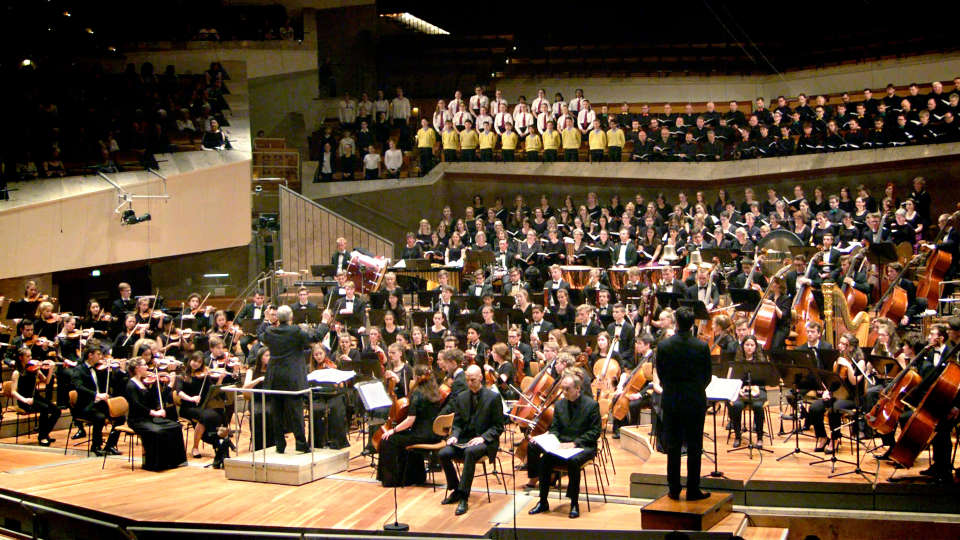 It is exactly a decade ago that the Berliner Philharmoniker set themselves the task of regularly inviting some of the best youth orchestras from all over the world to Berlin. Since then, the National Youth Orchestra of Germany has been a frequent guest at the Scharoun-designed Philharmonie; the Berliner Philharmoniker have been a patron of the long-established youth orchestra since 2013. Its approximately 100 members are between 15 and 20 years of age. Most of them still have their professional training to become a professional musicians before them – if they decide to do so at all, for the intention to take up a career as a musician is by no means a prerequisite for admission to the orchestra.

High technical ability, a love of music, and the desire to be a team player are sufficient to become a part of an orchestra which Sir Simon Rattle described in their guestbook in 2015 as follows: “You are sensationally good!” But this is not the only reason you should not miss any of the Berlin guest performances by the National Youth Orchestra of Germany: due to the strict age limits, the members of this orchestra, which delights audiences with its infectiously vital performances, change constantly – so each of its concerts is in both senses a “unique” experience.

For their concert this year given at the invitation of the Berliner Philharmoniker Foundation, the National Youth Orchestra of Germany has programmed Benjamin Britten’s 1966 War Requiem, a singular work of 20th-century musical history: written for three vocalists, a boy’s choir, a mixed chorus, a chamber orchestra and a symphony orchestra, it is nothing less than a highly complex and immediately poignant musical contribution to the European idea of international understanding – and who better to represent this than an orchestra of young musicians supported by an internationally acclaimed trio of vocalists?

The War Requiem, composed in 1961, is one of Benjamin Britten’s most personal works, due to the circumstances alone; moreover, it is his only composition with a clearly recognizable political connotation and a sociopolitical as well as moral and religious intent. Its origins date back to the Second World War. During the night of 14 November 1940 a ten-hour bombing raid by the German Luftwaffe destroyed the entire centre of the city of Coventry in central England; more than 60,000 buildings, including the medieval St. Michael’s Cathedral, were levelled. After the war ended, work to rebuild the church began immediately. With Queen Elizabeth II and the Archbishop of Canterbury in attendance, the cathedral designed by Basil Spence was consecrated on 25 May 1962; five days later, Benjamin Britten’s War Requiem was performed there for the first time.

The War Requiem is a commissioned work. The composition must have been relatively easy for its composer, however. Britten was not only a Christian and humanist, he was also an avowed pacifist. He wrote this opulently scored work – in addition to a large orchestra and three vocal soloists, it also calls for a chamber orchestra, mixed chorus, boys’ choir and organ – as a highly personal antiwar statement. The ethical rationalist spirit of the War Requiem is obvious from the choice of texts. Britten not only set the traditional Latin requiem text of the Roman Catholic Mass for the dead but also interspersed it with sadly melancholy verses depicting the abysses of war in gloomy tones by the poet Wilfred Owen, who was killed a few days before the end of the First World War. The importance of Owen’s poetry for Britten and his admiration of him as a poet of humanity are revealed in the fact that Britten prefaced the score with a quote from Owen which can be understood as a memento mori for the entire work: “My subject is War, and the pity of War. The Poetry is in the pity. All a poet can do today is warn.”

For Owen, warning meant exposing the inherently false terminology of war – its misguided heroism, which is bound up with a state-prescribed notion of patriotism that, particularly during the First World War, took on extremely strange characteristics at times – one need only think of Thomas Mann, for example, and his unfortunate patriotic lapses – and ultimately the deliberate aestheticization of battle as such. Britten assigned this morally subjective section of the War Requiem to the tenor and baritone soloists. These two parts reflect the horror of war with striking autonomy, accompanied by the twelve-piece chamber orchestra as the voices of the fallen soldiers. Opposite them, also separated, the soprano soloist, chorus and the immense, but always transparent, orchestra stand for the mourning of humanity in general, while the boys’ voices and the organ as a third independent musical semantic entity represent the remote, almost depersonalised, mystical world far above the battlefields.

Britten’s approximately 90-minute opus magnum draws its tremendous fascination, nervous tension and suggestive power from these musical and structural contradictions. The fundamental programmatic constant is the tritone interval F-sharp – C heard in the tolling of bells at the beginning of the War Requiem, depicting the unresolvable conflict between war and peace which will not be resolved until the end of the work. The opening (“Requiem aeternam”) is a funeral march starting on a low A and underlaid with timpani blows, continuing with the words “Requiem aeternam dona eis, Domine / et lux perpetua luceat eis”, intoned by the chorus with breathless upbeats. Against this gloominess Britten brings in the boys’ choir, an ethereal, crystalline voice evoking a kind of redemptive transcendence. This utopia does not last long, however, and an important stylistic principle of the work is soon introduced – the antiphon. The prayer for eternal peace and perpetual light has barely died away when an expansive, expressive tenor solo begins with the disillusioned, agnostic words of the poet Owen: “What passing-bells for these who die as cattle?”

This dialectical juxtaposition occurs throughout the requiem. While the Latin text embodies the Christian sphere of faith and is expressed accordingly, Owen’s words as set by Britten define the world as a scene of horror, madness and death but also a place of contemplation, as in the baritone solo following the Dies irae chorus, whose 7/4 meter and stumbling syncopations depict a terrified, stammering crowd. Symbolic of the entire work, the composer’s structurally dialectical approach becomes clear with the entrance of the soprano immediately following the baritone solo. Britten counters the concrete phenomenon with the abstract idea, the direct expression with the dogmatism of an assertion and the sudden intimate cry with the formal construction. The broad correlation of guilt and reconciliation is celebrated here, as though the composer wanted to say to the listener: it is always both, and always both at the same time.

It is not surprising that such a bipolar and colossal work already had an enormous emotional impact at its premiere, and not only the listeners were moved. Dietrich Fischer-Dieskau, who was the baritone soloist on 30 May 1962, later recalled this memorable concert in the Coventry Cathedral and expressed his profound inner emotion when he said “that by the end I was completely undone; I did not know where to hide my face.” A remark by Dmitri Shostakovich verifies that Britten’s work was not only able to move listeners in the Aristotelian sense but on the basis of its dialectical construction could also produce quite different reactions – perhaps intentionally. In a letter to a friend the Russian composer wrote: “I have been sent a recording of Benjamin Britten’s War Requiem. I am playing it and am thrilled with the greatness of this work, which I place on a level with Mahler’s Das Lied von der Erde and other great works of the human spirit. Hearing the War Requiem somehow cheers me up, makes me even more full of the joys of life.” That is what one would call successful dialectics.